Curcumin is one of the most frequently researched herbal substances; however, it has been reported to have a poor bioavailability and fast metabolism, which has led to doubts about its effectiveness. Curcumin has antioxidant and anti-inflammatory effects, and has demonstrated favorable health effects.

Curcumin is a polyphenol substance isolated from the rhizome of Zingiberaceae and Araceae plants. It is a major active constituent of turmeric, a common Asian spice used as a dietary spice, food-coloring, as a herbal remedy, and in the beverage industries. Its bioactive components have been investigated recently [1][2]. Diferuloylmethane (1,7-bis(4-hydroxy-3-methoxyphenyl)-1,6-heptadiene-3,5-dione), which is commonly referred to as curcumin, has been shown to have activity at the cellular level, by signaling multiple molecules. In addition it exerts antioxidant and anti-inflammatory properties. It may have many therapeutic effects [2][3], having exhibited antitumor, chemosensitizing, hepatoprotective, lipid-modifying, and neuroprotective effects [4]. Nevertheless, well-reported in vivo pharmacological activities of curcumin are limited by its poor solubility, bioavailability, and pharmacokinetic profile. As many data have suggested, despite its low absorption, curcumin may demonstrate beneficial effects on health by influencing the intestinal barrier function, sustaining high concentrations in the intestinal mucosa, modulating the functioning of the intestinal barrier, and decreasing high concentrations of bacterial lipopolysaccharide (LPS) levels [5][6][7].

The primary sites of metabolism for curcumin are the liver, together with the intestine and gut microbiota. After several reactions, curcumin’s double bonds are reduced in hepatocytes and enterocytes, and form dihydrocurcumin, tetrahydrocurcumin, hexahydrocurcumin, and octahydrocurcumin [8][9]. Following oral ingestion, the extensive metabolism of curcumin include reduction, sulfation, and glucuronidation in the liver, kidneys, and intestinal mucosa. 99% of plasma curcumin is present as glucuronide and sulphate conjugate metabolites which are less active [10]. Interestingly, a recent study has shown greater metabolic conjugation and reduction in the human gastrointestinal tract, in comparison to rat intestines [11].
Many other studies have revealed the presence of curcumin metabolites in the human intestinal tract [9]. Due to its resistance to low pH (i.e., stable in the range of pH 2.5 to 6.5), curcumin reaches the large intestine and undergoes extensive metabolic phases [12]. So far, two phases of curcumin metabolism have been reported [8][9][13].
Phase I includes the reduction of the four double bonds of the heptadiene-3,5-dione structure, reduction of curcumin to dihydrocurcumin (DHC), then to tetrahydrocurcumin (THC), and later to hexahydrocurcumin and, finally, octahydrocurcumin.
In phase II which takes place in the intestinal and hepatic cytosol [8], curcumin and its reduced metabolites are conjugated with monoglucuronide, a monosulfate, and then a mixed sulfate/glucuronide (conjugated curcumin), followed by conjugated DHC, conjugated THC, conjugated hexahydrocurcumin and, finally, conjugated octahydrocurcumin [13]. Hexahydrocurcumin and THC are the major products observed in most studies, whereas DHC and octahydrocurcuminol are generally not detected at all [14]. The lack of these two products may be the result of the enzymes responsible for the bioreduction which have been found to reside in the cytosol of the liver and intestine. These compounds may be easily conjugated in vivo and in vitro. For instance, hexahydrocurcumin shares the same phenolic groups or diketo moieties as curcumin, but has no olefinic double bonds. This fact makes it more stable than curcumin at a physiological pH level of 7.4 [15].
Interestingly, the intestinal microflora can deconjugate phase II metabolites and convert them back to the corresponding phase I metabolites, which may also lead to some fission products, such as ferulic acid [16]. Moreover, curcumin also may be metabolized alternatively by intestinal microflora, such as Escherichia coli and Blautia sp. E. coli has been reported to be active by an nicotinamide adenine dinucleotide phosphate (NADPH)-dependent reductase in a two-step reduction pathway from curcumin to DHC, then to THC. In turn, Blautia sp. carries out curcumin demethylation into two derivates: demethylcurcumin and bis-demethylcurcumin [8][17]. Curcumin and its reduced metabolites seem to be readily conjugated in vivo and in vitro [14]. Reductive conjugative metabolism of curcumin and an alternative metabolism by intestinal microbiota are shown in Figure 1. 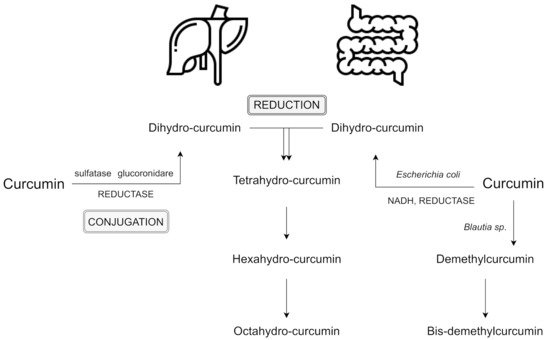 Figure 1. Reductive conjugative metabolism of curcumin and an alternative metabolism by intestinal microbiota; based on [8][13][17]. Abbreviation: NADH - nicotinamide adenine dinucleotide.

The human intestinal microbiota contains micro-organisms, estimated to consist of more than 1000 bacterial species, which are indispensable for organism physiology and metabolism and, as a consequence, play key roles in maintaining general health [1]. To date, many studies have examined alterations in the composition of microbiota and its link to spectrum of diseases, including diabetes, obesity, inflammatory bowel, liver diseases, depression, psoriasis, and neurogenerative disorders, and the field is growing at a dynamic rate.
Interestingly, despite its poor plasma and tissue bioavailability, preferential distribution and accumulation of curcumin in the intestine has been reported after oral or intraperitoneal administration [1]. Several studies have examined whether curcumin may exert regulative effects on the microbiota community. Human intestinal microbiota can transform curcumin in various metabolism pathways, including producing active metabolites which are able to exert local and systemic effects, but also by reducing the heptadienone backbone and demethylation by Blautia spp. [5][17]. As Pandey et al. [9] have suggested, an alternative metabolism of curcumin occurs by the intestinal microflora, especially by Escherichia coli. Hassaninasab et al. [13] also identified micro-organisms (strain Escherichia coli) capable of converting curcumin, isolated from the feces of two healthy subjects. An NADPH-dependent enzyme (CurA) in E. coli converts curcumin into dihydrocurcumin (DHC) and tetrahydrocurcumin (THC) [9]. In turn, the results of a study on Bifidobacteria reported by Jazayeri et al. [18] presented that micro-organisms such as Bifidobacteria pseudocatenulaum, Enterococcus faecalis, Bifidobacteria longum, Lactobacillus acidophilus, and Lactobacillus casei are important bacterial strains which are capable of reducing the parent compound of curcumin more than 50% and, in this way, can metabolize curcumin.
Shen et al. [19] reported ananalysis of the intestinal microflora in curcumin-administered mice and controls by pyrosequencing the V3 and V4 regions of the bacterial 16S ribosomal RNA genes. The researchers investigated whether the concentration of curcumin in the intestines following oral administration may result in regulative effects on the intestinal microbiota. One group of mice (n = 6) received a standard diet enriched with natural mixtures isolated from turmeric, which contained the three major parts of curcumin (40.9%), demethoxycurcumin (33.2%), and bidemethoxycurcumin (23.3%), in a dose of 100 mg/kg body weight for 15 days. The control group (n = 6) was supplied with the same feed, but without curcumin gavage. Following the addition of curcumin, significant increases (p < 0.05) in several representative families in the gut, including Prevotellaceae, Bacterioidaceae, and Rikenellaceae, were recorded. The abundance of Prevotellaceae decreased significantly in the curcumin group, in comparison to controls (from 15.48% to 6.16%; p = 0.01). A significant reduction was also reported in Prevotella abundance (from 13.29% to 4.63%; p = 0.00), Conversely, Bacteroidaceae in the curcumin group was significantly higher in comparison to the control group (3.21% to 1.15%; p = 0.00). Similarly, the amount of Rikenellaceae increased (from 4.73% to 7.96%; p = 0.04) with Alistipes abundance (from 4.73% to 7.96%; p = 0.04). These results indicated that, despite no significant alteration, oral administration of curcumin tended to decrease the microbiome biodiversity. More studies are required to extend the current microbiome outcomes, in order to prove the therapeutic application of curcumin for the gut microbiome.
The action of curcumin (as well as resveratrol and simvastatin) has also been examined in animals affected by Toxoplasma gondii. It was found that curcumin, resveratrol, and simvastatin-treated animals had less proinflammatory Enterobacteria and Enterococci by 3.0–3.5 (p < 0.000001) and 1.0–1.5 (p < 0.0005), respectively. The potentially anti-inflammatory Lactobacilli or Bifidobacteria were slightly increased, by up to 1.0 log orders (p < 0.05–0.0005) [20].
The influence of curcumin on the intestinal microbiota is still not clear. However, current evidence indicates that curcumin is biotransformed not only in the gut to various metabolites via different pathways which include among others demethylation, hydroxylation, and demethoxylation. These metabolites have been reported to be even more bioactive than the parent curcumin, but also the gut microbiota may be regulated by administration of curcumin and lead to changes in the biodiversity and composition of microbes. This plays a key role in potential indirect health benefits [1]. The bi-directional interplay between curcumin and gut microflora is presented in Figure 2. 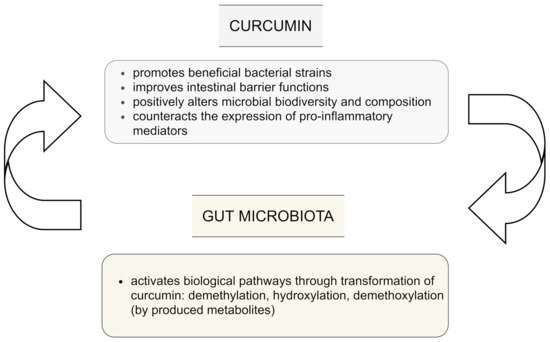 4. Curcumin and Microbiota in Colitis

Two independent studies [21][22] have explored the modulative effects of nanoparticle curcumin administration on colonic microbiota during colitis, and suggested a modulating structure of intestine biodiversity. Interestingly, the results of randomized, double-blind, placebo-controlled study published in 2021 showed that 8 weeks administration of Curcugen™, a curcumin extract (DolCas Biotech, LLC, 9 Lenel Rd, Landing, NJ 07850, USA), was correlated with an improvement in gastrointestinal symptoms (abdominal pain, indigestion, diarrhea, and constipation) in adults [23]. The curcumin extract Curcugen™ contains 98.5% turmeric-based ingredients (50% curcuminoids, 1.5% essential oils, and other native turmeric molecules). Additionally, the potential mechanisms associated with curcumin’s influence on microbial diversity have been examined. In comparison to placebo, no significant changes in the biodiversity (from the phylum to genus level) of bacteria which are regularly observed in adults with irritable bowel syndrome (IBS) were reported. These results could suggest that changes in the gut microbiota are not responsible for improving gastrointestinal symptoms in adults. In another previous study by McFadden et al., curcumin elevated microbial richness, prevented alpha diversity decrease, and increased the proportion of Lactobacillales, while conversely decreasing the proportion of Coriobacterales in mice, during colitis and colon cancer prevention [22].

5. Curcumin and Microbiota and Urinary Metabolism

Another interesting in vivo study has been carried out in healthy adults [24]. The aim of this study was to describe the potential effects of curcumin on changes in 24-hour urinary composition in healthy volunteers in response to daily consumption of a dried Curcuma longa extract containing a standardized amount of curcuminoid (equivalent to 100 mg of curcuminoids) for 28 days. Their results showed curcumin-induced alterations in urinary metabolites. Curcumin and two metabolic derivates (HTC and DHC) were detected in the urine, this fact points to the absorption of the major curcuminoid from the extract and its further metabolism by the liver and intestinal microflora.
Peterson et al. [5], in their pilot study, examined gut microflora profiles in healthy humans. All study participants were blinded to the treatments they received (curcumin tablets, turmeric, or placebo). The results concluded that the respondent’s microbiota response was individualized over time; however, the comparison of microbiota alterations in the turmeric and curcumin supplementation groups were highly similar. The authors interpreted this observation of the turmeric response as a reflection of the catabolism of polysaccharide compounds in the root, involving a wide range of glycosyl hydrolases encoded by the species, which were elevated in the responsive subjects (Bacteroides, Bifidobacterium, Alistipes, Parabacteroides).