Essential oil (EO), as the main component used in inhalation therapy, has been widely investigated for its therapeutic effects. Evidence indicates that EOs can successfully reduce anxiety and relieve pain when combined with conventional treatment [1][2]. EOs can be administered through oral consumption, direct skin contact, or inhalation [3]. Among all different administration routes, inhalation is the most commonly adopted method. In fact, EOs from different plant extracts have been studied to demonstrate different effects, with lavender and bergamot EOs being the most widely used ones for relaxation in either single use or mixed use with reported pharmacodynamic interactions [4]. It has been shown that the different positive effects were linked to specific constituents in EOs [5][6]. Therefore, the combined use of EOs consisting of different molecular compounds, is able to maximise the therapeutic effect [7][8].

Table 1 summarises the effect of EOs in human studies. For instance, the inhalation of lavender and chamomile EOs was found to decrease levels of depression, anxiety, and stress in older adults. It was suggested that the anxiolytic and antidepressant effects could be associated with the suppression of the activity of the sympathetic nervous system [9].

Moreover, EOs have the potential to relieve depression and secondary depressive symptoms arising from different types of chronic conditions, like anxiety disorders and dementia [22][23][24][25]. Fayazi and co-workers have shown that patients inhaling lavender EO before undergoing heart and abdominal surgeries reported less anxiety, suggesting the potential anxiolytic effect of the EO [11]. The therapeutic effects of EOs have also been proven in animal studies (Table 2).

Table 2. Summary of pre-clinical examinations of EO inhalation on depression and anxiety-like symptoms in animal models.

3. Absorption of EO Molecules through Inhalation (Mechanisms behind the Effect of EOs on Brain)

EOs are composed of a variety of volatile chemical constituents. To facilitate the absorption of EOs, a novel administrative method utilising nanotechnology has been developed. By encapsulating EOs into nanoparticles, the uptake and effect of them can be enhanced. The inhaled EO molecules will be delivered to the brain region via different pathways according to their molecular sizes. The possible inhalation delivery pathway involves both the olfactory and respiratory systems (Figure 1).

There are three potential basic mechanisms enabling EOs to influence brain functioning. The first mechanism involves the activation of nasal olfactory chemoreceptors and the subsequent effect of olfactory signals on the brain. The olfactory system is unique among the sensory systems for having direct anatomical and functional links with the limbic system. Thus, olfactory stimuli can have a strong effect on mood. The second putative mechanism of action is direct penetration of EO molecules via the olfactory nerve into connected brain areas and the induction of cellular and molecular events. The third potential pathway is the alveolar absorption of EO molecules into the blood circulation, crossing the blood–brain barrier (BBB) to interact with specific brain regions. 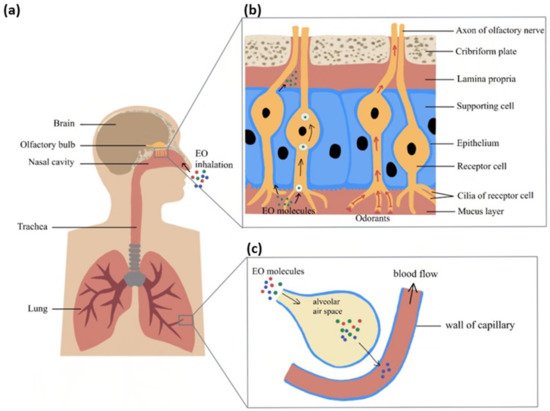 4. Effect of EO on Cellular/Molecular Events

According to the 5-HT hypothesis of depression [39], the signs and symptoms of depression are the result of 5-HT deprivation. The 5-HT hypothesis is currently the accepted hypothesis with regard to the pathophysiology of depression. The effect of EOs on the 5-HTergic system has been demonstrated in various studies. In a study, which used compound anshen EO, the inhalation of the EO improved sleep quality and promoted 5-HT increase in experimental mice [40]. An increase of 5-HT-expressing neurons in the dorsal raphe nucleus was found in animals that inhaled EO from asarum heterotropoides for 3 h [35], suggesting that the positive effect of EO inhalation may occur in both acute and chronic conditions.

Studies on EOs and neurotrophic factors have mainly focused on the expression levels of brain-derived neurotrophic factor (BDNF). In a clinical study, women whose children were diagnosed with attention deficit and hyperactivity disorder were recruited, assuming that this particular population suffered from considerable stress affecting their mental health [41]. After a 4-week treatment program with EOs, the level of anxiety and depression of the subjects decreased, while the plasma BDNF level (reflecting the brain tissue level of BDNF) significantly increased. In other animal models of depression assessing the effect of EOs, similar findings have been observed as well.

4.3. Regulation of the Neuroendocrine System

It is believed that regulation of hormonal levels is a potential underlying mechanism explaining the effect of EOs, for instance, in the treatment of premenstrual syndrome [42] and menopausal disorder [43][44]. Since stress is a risk factor in depression and anxiety disorders, stress hormone cortisol has been the focus of studies examining the antidepressant and anxiolytic effects of EOs [45]. In human studies, acute exposure to lavender EO has been shown to decrease salivary and serum cortisol levels [46][47]. Simultaneously, findings indicated increased relaxation in subjects, including improved coronary flow velocity [47]. The cortisol-suppressing effect was reported in adults [48], pregnant women [49], mothers of children with developmental dysfunction [41], young children [50], as well as patients undergoing chemotherapy [51]. Apart from lavender, other EOs were also shown to affect cortisol levels, including bergamot [17][52] and grapefruit seed [53].

Based on the assumption that ROS and inflammatory signalling have a role to play in depression, EOs may be beneficial in depression due to their antioxidant and anti-inflammatory properties. For instance, exposure to lavender and rosemary EOs was found to reduce free radical scavenging activity (FRSA), which further prevents the detrimental effects of oxidative stress [46]. In addition, cinnamomum cassia presl (CC-EO), the active component of cinamaldehyde EO also possesses antioxidant properties [54]. Exposure to MJ was effective in preventing depression-like behaviour induced by lipopolysaccharide (LPS) and attenuated the increase of malondialdehyde (MDA), glutathione (GSH), and tumour necrosis factor-alpha (TNF-α) in mice [55].

To facilitate the use of EOs in clinical practice when treating depression and anxiety disorders, further large-scale clinical trials are required to confirm the effectiveness and efficacy of them. Although various studies have illustrated that certain EOs possess antidepressant and anxiolytic effects [24][56], the choice of EOs is not standardised. As the active ingredients may vary among EOs due to non-standardised manufacturing processes, clinical trials with large sample size and standardised EOs as treatment agents are required.