Electric vehicle (EV) adoption is growing worldwide with increasing market pull from consumers and market push from manufacturers of vehicles and charging equipment, as well as others in the supply chain. Governments have begun developing policies to support EV uptake and local governments, in particular, are examining what role they should play. In Australia, a large country with low population density, EV uptake has been slower in comparison to other similar economies.

The transport sector is a major source of global greenhouse gas (GHG) emissions. It was responsible for 25% of global carbon emissions in 2018 with steady increases in recent decades [1]. Transport plays an important role in society, facilitating work, education, leisure pursuits, the transportation of goods, and the provision of services. However, carbon dioxide emissions arising from human activities and the accompanying adverse impact on the environment has led to the realisation that all elements of the economy must be rapidly decarbonised.

Australia is a large country with a relatively small population. At 7.7 million km2, it is the sixth-largest country in the world [2][3]. However, with only 23.5 million citizens (compared to 1.4 billion in China or 333 million in the United States), population density is low compared to other large countries. A large majority of Australia’s population also reside in urban areas (86.1%), mostly in cities or towns along the East coast [4].

Transport is Australia’s third-largest source of GHG emissions (18.9% of total), and these have been increasing more quickly than any other sector over the last three decades [5]. Over half of this is contributed by cars, of which Australia has a particularly high dependency [6]. Australia’s average emissions intensity for passenger vehicles is also higher than that of other similar advanced economies (48% higher than Japan, 41% higher than Europe, and 16% higher than the United States), due to various factors such as consumer preferences and weaker policy drivers for low emission vehicles [7]. Therefore, electrifying the Australian passenger vehicle fleet is critical for reducing the country’s carbon emissions from transport and overall. It could also help Australia capitalise on other associated benefits, including improved local air quality, less reliance on imported fuels, support a greater share of renewables on the grid, and lower fuel costs for consumers. However, the electrification of transport in Australia faces both generic and specific challenges posed by the country’s geography, population, demographics, and structure of its political system.

In a 2019 consumer survey, over half a million Australians said that they intended to buy an electric vehicle EV within the next four years [8]. Despite such positive consumer attitudes, fewer than 7000 plug-in EVs were sold in 2019 [9] out of 1.15 million new car sales [10]. This equates to only 0.6% of new car sales in 2019 being electric. This represents a low uptake of EVs when compared with other countries with whom it typically compares in terms of population, economy, or standard of livin. 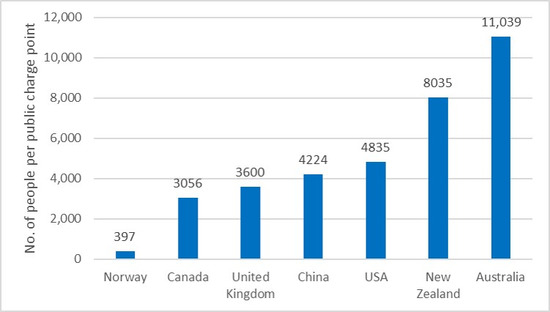 Figure 1. Number of people per public charger (based on number of public EV charge points).

As shown in Figure 2, Australia has seven EVs per public charge point, the same as Canada, which has a similar landmass to Australia. Although they have a similar ratio of EVs to EV chargers, Canada has substantially more plug-in electric vehicles in its fleet than Australia (82,756 compared to 16,275), more public chargers (12,333 compared to 2307), and a higher percentage of its fleet are electric plug-in (0.23% compared with 0.08%). 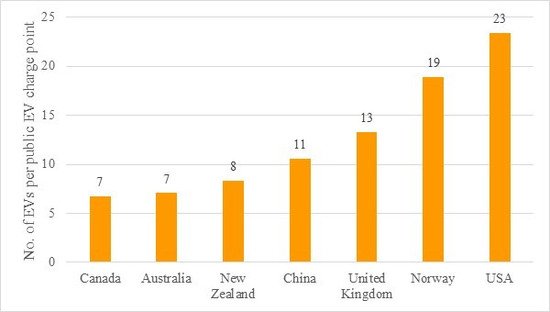 These metrics reflect the very real geographic and population challenges that Australia must overcome to decarbonise its transport. In addition, it must address the other well-documented barriers that exist for EV adoption, such as those relating to the techno-economic (e.g., range and price) and non-technical (e.g., consumer-related, regulation, and policy) categories [11][12][13].

1.4. The Role of Local Government in Australia

Australia is divided into 537 local government areas (LGAs), known as “local councils”. Local councils represent the third tier of government and vary widely in geographical size and population, and therefore resources. They have key responsibilities related to the local road infrastructure, local environmental amenity, and ensuring local communities thrive, including being responsible for the planning, development, and maintenance of local transport infrastructure such as roads and car parking [14]. While some are currently trialling and testing approaches to deploying EV charging infrastructure and electric fleets, most are yet to publish their strategies. With such a critical role in road transport infrastructure, the support of local councils is needed to make EVs a viable choice for consumers.

While both consumer awareness and choice of EVs is expanding, EV penetration will be dependent upon the necessary charging infrastructure keeping pace. Local governments have a key role to play in this.

2. The Role of Government

All levels of government have acknowledged the important role EVs have to play and have published (or they have publicly announced that they plan to publish) EV strategies. The Federal Government has published a single page factsheet relating to what it says is its EV strategy while more recently announcing a discussion paper on its Future Fuels Strategy. Six states/territories out of a total of eight have now published a dedicated EV/e-mobility strategy. For local government, broader transport or mobility strategies are common and some do refer to EVs or low emission vehicles and actions to support them. Table 2 presents a summary of the relevant EV strategies and support mechanisms for different levels of government in Australia.

Table 2. Summary of relevant EV strategies and support for the different levels of government in Australia.

Multiple risks exist for local government concerning charging networks due to high initial investment costs, revenue uncertainty, electricity tariffs and peak capacity contracts, and the involvement of multiple stakeholders. An agile approach to refining a business model, while future-proofing any choice of technology or platform, will be needed if they are to have a role in the deployment of EV infrastructure in Australia.

Australia’s EV charging infrastructure deployment is far behind other countries it typically compares itself with, even those with similar challenges with low population density and large landmass. This means Australians will lose out on capitalising on the benefits EVs can bring. However, local governments in Australia can play a key role in the deployment of public EV chargers in the early stages, given their responsibility for managing road transport infrastructure and especially where some of the benefits and challenges of EVs are viewed as being more local in nature (e.g., air quality).

While many choices can be made by councils, it is important for them to determine the role they want to play in owning or facilitating the deployment of the charging infrastructure and the risks that they are willing to bear. A morphological approach applied in a local council context can help local governments make considered choices that take into account the various risks and benefits. Although many of the risks can be assigned to other parties by modifying the council’s business model, risks relating to regulation remain and will require effective national standards and policy on charging infrastructure specifications, integration with the electricity grid, planning, building and construction, public safety, and consumer protection. This is challenging for local governments to influence at a state or national level.

To accelerate the rate at which public EV chargers are rolled out across Australia, there is a need for more consistent guidance aimed at local government audiences. Further development of this methodological approach with other local councils would build the evidence-base and fit-for-purpose templates to guide local government in a meaningful way.