The use of photodynamic therapy (PDT) to eradicate microorganisms has been regarded as a promising alternative to anti-infective therapies, such as those based on antibiotics, and more recently, is being considered for skin wound-healing. Among the several molecules exploited as photosensitizers (PS), porphyrinoids exhibit suitable features for achieving those goals efficiently. The capability that these macrocycles display to generate reactive oxygen species (ROS) gives a significant contribution to the regenerative process. ROS are responsible for avoiding the development of infections by inactivating microorganisms such as bacteria but also by promoting cell proliferation through the activation of stem cells which regulates inflammatory factors and collagen remodeling. The PS can act solo or combined with several materials, such as polymers, hydrogels, nanotubes, or metal-organic frameworks (MOF), keeping both the microbial photoinactivation and healing/regenerative processes’ effectiveness.

Figure 1. General structure of the porphyrinic nucleus and natural derivatives, such as chlorophyll a and b, and heme.

The strong absorption usually exhibited by these highly conjugated aromatic compounds in the visible region (Figure 2A) and their ability to generate reactive oxygen species (ROS), such as oxygen singlet (1O2), under light irradiation and in the presence of dioxygen (Figure 2B) are particularly relevant for their success to mediate the photodynamic process in photodynamic therapy (PDT) against tumoral cells [33][36][41][42], but also toward non-oncological pathologies, such as age-related macular degeneration. In the last two decades, porphyrinoids (either as free-base or coordinated with different metals) have been recognized as highly efficient PS to eradicate a broad range of microorganisms including drug-resistant strains using the same concept of PDT [31][37][43][44][45][46][47][48][49][50].

For the photodynamic process to occur, the PS is first activated with light at an appropriate wavelength, and promoted to an excited singlet state (Figure 2). When returning to its stable ground state, the excess energy can be released by emitting light in the form of fluorescence or by heat production (internal conversion). Alternatively, the excited 1PS* can undergo the so-called “intersystem crossing process”, affording the excited triplet state (3PS*). In this excited state, the PS can transfer their energy directly to dioxygen (3O2) (Type II mechanism), returning to the singlet ground state (1PS) and/or undergoes electron transfer reactions (Type I mechanism) to biological substrate molecules, leading to the formation of radicals and consequently, other reactive oxygen species (ROS), such as hydroxyl radical (OH), superoxide anion radical (O2−), and hydrogen peroxide (H2O2) (Figure 2B) [51][52][53]. Such radicals are then responsible for the elimination of undesirable bacteria.

Recently, the potential of PDT for tissue regeneration has caught the attention of many research groups concerning the role of non-porphyrinoid PS for skin wound healing, as was recently highlighted in our previous review [54]. In that review article, it is discussed that the PDT process not only enhances the mitochondrial activity, respiratory chain, and ATP synthesis [52][55], but also recruits important metalloproteinases (MMP)/growth factors (GF) and activate signal-regulated kinases [56][57] that are critical for the differentiation and proliferation of skin cells (such as fibroblasts) and extracellular matrix (ECM) components (such as elastin and collagen) [53][56][57][58] (Figure 3). However, bacterial infections are still the major issue during skin wound healing, being responsible for unsuccessful regenerative processes [59]. This is the main reason that makes PDT an attractive approach to eradicate bacterial infections in situ, while promoting local proliferation of healthy tissue. One of the major challenges is fine-tuning the structural and photophysical properties of PS to have strong absorption in the ideal “phototherapeutic window” (wavelengths ranging from 600 to 800 nm) where the light penetration in the tissue is high. In fact, most of the porphyrinoid-based PS described as effective for wound healing absorb in this region (Figure 2). 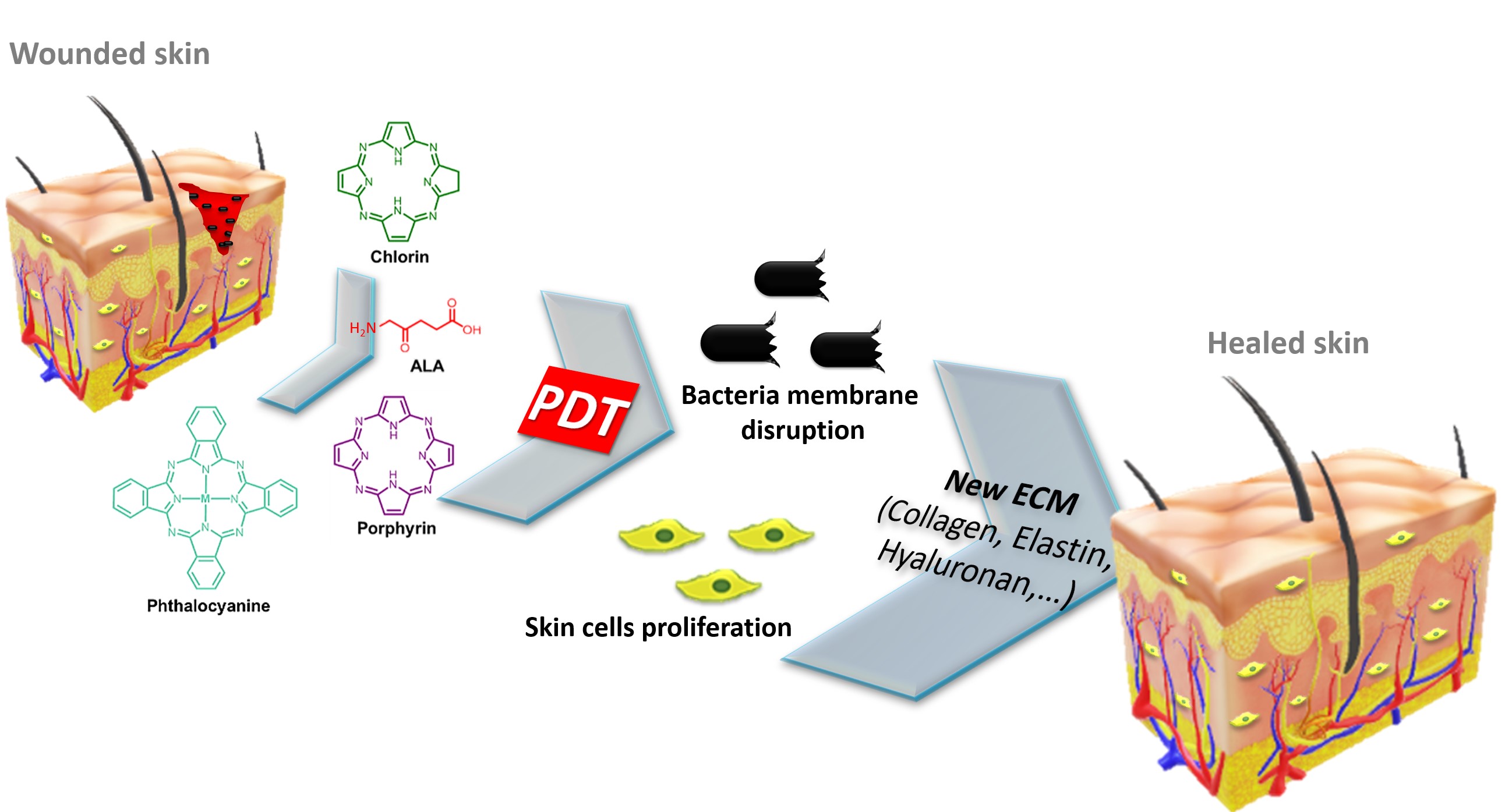 The PS studies comprised (i) first-generation, consisting of mixtures obtained from natural occurring porphyrins (e.g., hematoporphyrin derivative, Photofrin); (ii) second-generation, such as porphyrins, chlorins, benzoporphyrins and phthalocyanines with pure structures; and (iii) third-generation, resulting from the combination of second-generation PS with specific delivery carriers, such as antibodies, liposomes, polymers, nanoparticles, and micelles to overcome the drawbacks of the other two PS generations, such as low accumulation on the desired site, self-aggregation and low solubility in aqueous media [46][59][60].

The increasing number of publications embracing tetrapyrrolic macrocycles as PS for skin wound healing prompts us to compile these works separate from our previous publication where the non-porphyrinoids PS were the target [54]. Herein, this review will focus on the use of tetrapyrrolic macrocycles, namely porphyrins, chlorins, and phthalocyanines, as PS for skin wound healing, with some of them clinically approved (e.g., Hematoporphyrin derivative, Photofrin®, Foscan®, Fotoditazin®, Visudyne®) but also on the approved prodrugs 5-aminolevulinic acid (Levulan®) and derivatives (Metvix® (methyl ester derivative) and Hexvix® (hexyl ester derivative)) as precursors of endogenous PP-IX. This review is organized according to the structural features of each PS and, to facilitate the discussion, the macrocycles obtained from natural sources were separated from the synthetic ones.

In summary, PDI with porphyrinoids-based photosensitizers exhibits great potential for the treatment of skin wounds, by enhancing healing in bacteria-infected wounds. Noticeably, in recent years, significant efforts were performed by the scientific community to improve the use of tetrapyrrolic macrocycles in skin wound healing. The capability of porphyrinoids to act as efficient PS (Table 1) relies on their capability to generate ROS when irradiated at wavelengths comprised in the “therapeutic window”.

Table 1. Summary of the studies discussed in this review concerning the use of porphyrinoid PS for skin wound healing.

The different PS can be used solo, modified with appropriate units (ex. chlorin derivatives modified with poly-Lysine or incorporated into micelles to increase their lipophilicity), or incorporated and conjugated with other molecules (ex. immobilization in polymeric templates). In fact, the reported studies show that the pathway to improving the efficiency of porphyrin-based PS in skin wound healing passes throughout the exploitation of using PS immobilized/supported into solid matrixes. This strategy is more advantageous since it allows to merge the features of both PS and matrix.

The use of (bio)polymers, such as chitosan, collagen, alginate, and polyurethane, allows to match the PS features with the biocompatibility, degradability, and stimulating properties of the polymer. This is a significant input that makes available the use of molecules with low solubility but remarkable ROS production, such as some synthetic meso-tetraarylporphyrins or phthalocyanines.

Porphyrinoids display high synthetic versatility, allowing the preparation of several different PS delivery systems in the target wound site. Tetrapyrrolic can be directly attached to the matrix through covalent bonds, encapsulated in polymeric nanocarriers, incorporated by a physical mixture with hydrogels, or used to decorate polymeric systems throughout non-covalent approaches.

The symbiotic effect of PS and biocompatible polymeric systems improve not only the healing rate, but also the PS efficiency against Gram-negative bacteria (bacteria that are less affected by PDI) growth and consequent biofilm formation, the optimization of the PS into the wound, and the PS degradation rates slow down. Moreover, this approach allows topical application at the wound site which is a significant advantage for the regenerative and skin wound healing processes.

Considering that the limited clinical success of wound healing [101] is associated with the lack of (i) funding, (ii) centers of excellence concerning wound care management, (iii) methodologic consistency in clinical trials, and (iv) the appearance of more complex pathologies due to the populations aging, and too many drugs with limited efficacies, we believe that PDI/healing can have an opportunity to overcome some of these drawbacks. This approach can improve the local asepsis due to its antimicrobial effect, which includes areas with diminished blood irrigation, and where the conventional antimicrobials do not work. Consequently, it will reduce patient pain and increase cosmetic effects due to enhanced cell proliferation. Additionally, it can be performed in ambulatory care environments, requiring low-cost light sources, and demanding easy clinical staff training. Furthermore, the treatment can be repeated without resistance development.