An empirical model of global solar irradiance (EMGSI) under all sky conditions was developed by using solar radiation and meteorological parameters at Sodankylä. The calculated hourly global solar irradiance is in agreement with that observed at the ground during 2008–2011 and at the top of the atmosphere (TOA). Using this empirical model, the albedos at the TOA and the surface were calculated, and they are in agreement with the satellite-retrieved values.

The surface temperatures in the Arctic increase much faster than the global average, a phenomenon known as Arctic Amplification. The most significant increase occurs in the winter [1][2][3]. The Arctic warming is related to the imbalance of energy budget at the ground and the top of the atmosphere (TOA), sea-ice–albedo feedback, lapse-rate feedback, temperature inversion, enhanced greenhouse effect [1] and the reasons for the climate change in the Arctic region are still unclear.
The Sun provides important energy to the atmospheric gases, liquids and particles (GLPs) and initiates their changes in the three phases through chemical and photochemical reactions (CPRs). Therefore, solar radiation transfers in and interacts with the atmospheric GLPs. The attenuation in the atmosphere and reflections at the ground and the TOA are necessary to be investigated; these physical and chemical processes control/interact with the atmospheric movement through short- and long-wave radiation in different ways [4][5][6][7][8][9][10][11][12], and should be studied for further understanding the regional climate and climate change in the Arctic.
The popular radiative transfer models and empirical models are used to estimate global, direct and diffuse solar radiation at the ground and briefly described in References [12][13][14][15][16][17][18][19][20]. To thoroughly investigate the Sun–atmosphere–Earth system, variations of solar radiation at the surface and the TOA, the loss of solar radiation in the atmosphere, the albedos at the surface and the TOA, and the interactions between solar radiation and meteorological variables are required. 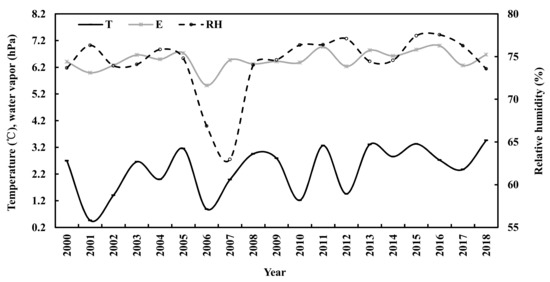 3. The Losses of Global Solar Irradiance in the Atmosphere during 2000–2018

The global solar irradiance losses caused by absorbing and scattering GLPs (GLA and GLS) were calculated by using A1(1-e−kWm×cos(Z)) and A2(1-e−S/G), respectively. The total loss GL is GLA + GLS. The monthly losses due to absorption GLA dominated the total loss GL and showed clear seasonal variations, lower in April–September and higher in October–March, whereas GLS did not have evident seasonal variation and most peaks appeared in October–February. During January 2000 to December, 2018, (1) monthly GLA decreased slightly by 0.003%, associated with the increase of water vapor by 0.06%; (2) monthly GLS increased by 0.06%, associated with the increase of S/G by 0.14%; and (3) monthly GL increased by 0.02% (Figure 4).