Micromegas (MICRO-MEsh GAseous Structure) detectors have found common use in different applications since their development in 1996 by the group of I. Giomataris and G. Charpak.

The Micromegas (Micromesh gaseous structure) particle detector was invented in 1995 by I. Giomataris and collaborators [1]. It is a two-stage parallel plate avalanche chamber with a narrow amplification gap (tens to one or two hundred microns). The gas volume is split between two regions by a thin micromesh, which separates the amplification gap from the drift gap. Figure 1 shows a sketch of the Micromegas working principle. 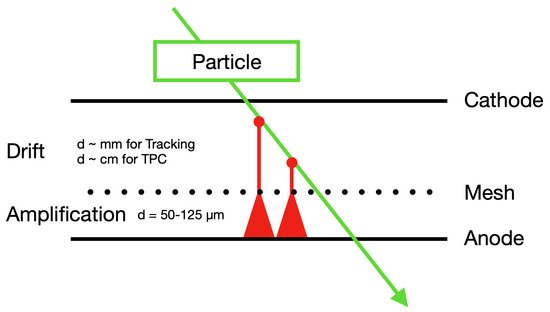 Figure 1. When a particle passes through the Micromegas detector, it ionises several atoms in the conversion volume, and the primary electrons drift to the amplification region. In the amplification region, an electron avalanche is formed.
To preserve a distance between the anode and the grid mesh, spacers from insulating material are used. Initially, fishing lines, 100 μ m in diameter were used, which were soon replaced by pillars fabricated with conventional photo-lithography. In the region above the mesh, called the conversion or ionization region, the primary electrons are produced by the conversion of X-rays or by ionization from a charged track. The field in this region ranges generally from 100 V/cm to 10 kV/cm, fixed by the voltage imposed on an electrode (cathode) closing this volume.
The thickness of this region ranges from a few mm for the detection of normally incident tracks to a few meters in the case of a Time Projection Chamber (TPC) [2][3]. Electrons produced in the conversion gap by the incident particle are drifting toward the mesh and reach the amplification gap due to the funnel shape of the field lines through the mesh holes. In this region, between the mesh and the anode, a high field of several tens of kV/cm induces multiplication to those ionization electrons. The electric field is homogeneous both in the drift and amplification gaps.
Historically parallel plate detectors used an amplification gap on the order of 4 mm. During the development of another detector called the “Hadron Blind Detector” (HBD) [4] in 1991, an improvement of the stability of the structure was noticed when using a narrower gap; however, it proved impossible to go below 1 mm due to the defects of parallelism and the traction of the grid toward the plane of the anode by the strong electric field applied. This improvement effect was later understood and put into the form of a simple mathematical equation: due to the narrow amplification region in Micromegas, the variations of the amplification gap (mechanical defects) are compensated by an inverse variation of the amplification coefficient and, therefore, do not cause fluctuations in the gain of the detector [5]. This is not possible in the case of a large amplification space, such as in traditional parallel plate detectors.
Further improvements and simplifications in the fabrication techniques in the following years led to demonstrating better performance and obtaining outstanding results in the laboratory and in the test beams at the European Laboratory for Particle Physics (CERN): spatial resolution (12 μ m), temporal (<1 ns) and good resistance at counting rates greater than 10 6 s − 1 mm − 2 [6][7]. Thanks to these advances, the detector was adopted by the international scientific community, and today it is widely used in projects by numerous international collaborations [8].
The simple concept of the Micromegas detector has many advantages: a low material budget, only two moderate-voltages suffice to operate it, a fast electron signal, efficient and fast ion collection due to the small gap size, high rate capabilities and low space charge build-up, as well as the absence of a ballistic deficit. The small amplification gap is a key element in Micromegas operation, giving rise to a great performance:

Micromegas detectors are built using different types of meshes depending on the fabrication technique and the application. We can distinguish three main categories: flat meshes made of thin (4–10 μ m) metallic sheets, where holes are produced by micro-machining procedures (e.g., electroforming, chemical etching, and vaporisation, …) with a typical pitch of 500 Lines Per Inch (LPI).
In the second category, the mesh is made of mechanically woven stainless-steel wires. The typical wire thickness is of 18 μ m, and a maximum mesh thickness of about 30 μ m is achieved by flattening the cross-points of the wires in the mesh. Figure 2 shows a microscopic image of a woven and an electroformed mesh. The third category concerns the cases where the mesh is formed at the same time with the spacers with some specific technique, as is the Microbulk [11] or the InGrid [12] technologies, described later in this section.

Figure 2. Microscopic pictures of (a) woven inox mesh and (b) electroformed “thinmesh”. Both Micromegas are produced in the bulk technique, and a pillar is shown in the center of the picture.
In the traditional way, Micromegas is obtained by suspending a mesh over the anode strips or pads. Since 2004, several technologies have been developed to attach the mesh structure to the anode plane using higher precision methods and envisaging the transfer of the production to industry. A large step in the direction of the industrial manufacturing of large-size detectors was the development of the “Bulk” Micromegas technology [13].