PAHs are a group of organic compounds made up of simple aromatic rings that have joined together and do not contain heteroatoms or carry any substituents. PAHs are found in oil, coal and tar deposits and also as products of the use of fuels (either fossils or biomass).

Plastics are increasingly used in our society and are a key point in the economy of sectors as diverse as packaging, transportation, construction, healthcare and electronics. The significant growth in plastic production in the last 50 years is a reflection of its great success; annual global plastic production has increased from 2 to 380 million tonnes since 1950, reaching 368 million tonnes in 2019 [1]. Moreover, the global consumption of plastics has increased more than 20 times over the last half century, and it is estimated to double again by 2034 if action is not taken [2]. High production rates and a lack of consumer awareness have led to a large generation of plastic waste.

Traditionally, the dominant practice of business in production industries has been based on a Linear Economy model: using raw materials to produce a product and indirectly a waste that needs to be further disposed. With a growing world population, the amount of raw material requirements has increased exponentially, causing a significant negative impact on the social and natural environment. In response, the only long-term sustainable alternative is a more efficient circular economy, where resources are handled more competently.

The Circular Economy model aims to create value from waste by recovering and reusing resources. In all areas, waste is generated both in production (post-industrial waste) and use (post-consumer waste). Recycling can close the loop of a circular economy by re-introducing into the economy high-quality plastic recyclates incorporated into new products; this will significantly reduce the consumption of raw materials, saving both energy and CO2emissions [3]. Recyclers operate at the end and at the beginning of the value chain, by recovering materials from End of Life (EoL) products and reintroducing them at the beginning of the process value chain [3].

In 2015, the European Commission adopted a European Union (EU) Action Plan for a circular economy [4]. In this plan, the EU identifies plastics as a priority and commits to launching a strategy that regulates the challenges posed by plastics and takes into account their entire life cycle.

In it, the EU set different objectives in order to monitor all aspects of the life cycle of plastics. In fact, of total plastic waste, packaging represents more than 60% [5]. To counter this, the European Commission declared that by 2030, all plastic packaging marketed in the EU must be reusable or cost-effectively recyclable. As of today, the recycling rate for plastic packaging is only 42% [1], which places the target quite far away.

2. Substances of Concern in Recycled Plastics: A Focus on PAHs and POPs

Different authors [6][7] have shown the importance of bearing in mind the presence of different substances in recyclates. Particularly alarming are those considered to be carcinogenic, such as many PAHs and POPs.

PAHs are a group of organic compounds made up of simple aromatic rings that have joined together and do not contain heteroatoms or carry any substituents. (i.e., they accumulate in the fatty tissue, which makes them very dangerous), solid at room temperature and formed as a result of incomplete combustion in both natural and anthropogenic processes. As pollutants, they have raised concern because some of them have been identified as carcinogens, mutagens and teratogens. Different organizations have assessed their toxic properties and have classified PAHs into different groups.

For their part, POPs are different groups of compounds that present a particular combination of physical and chemical properties that allow them to remain intact for years once they have been released into the environment. By their nature, POPs accumulate in the fatty tissue of living organisms, which is why they are found in higher concentrations at the highest levels of the food chain, while also being toxic to both humans and wildlife.

Usually, POPs are divided into the following two groups (seeFigure 3): ‘legacy’ POPs, i.e., substances with the particular properties of POPs that have been long-recognized as harmful and are controlled under international regulation since at least 2003, and ‘emerging’ or ‘new’ POPs that are being considered for banning purposes nowadays [8]. 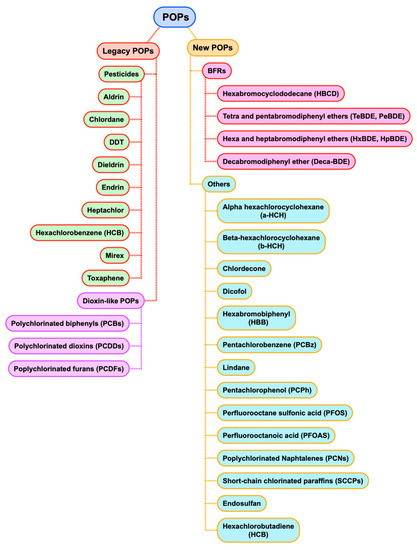 Under ‘legacy’ POPs, the following two different sets are included: different pesticides and dioxin-like compounds, including in this last group the dioxins (PCDDs), furans (PCDFs) and biphenyls (PCBs). On the other hand, the compounds included as ‘new’ POPs consist of a group of four brominated compounds that are used as flame retardants (BFRs), and other substances that are pollutants by themselves or that can give rise to very dangerous pollutants.

3. Techniques for the Isolation of PAHs and POPs from Plastic Samples

Different techniques are used for the isolation and instrumental analysis of the considered contaminants. Commonly, an extraction with an appropriate organic solvent and a mild cleanup are performed.

The most widely used solvents to extract organic compounds are dichloromethane (DCM), isooctane, n-hexane, toluene, acetone, pentane/DCM (1:1,v/v) and toluene/acetone (1:1,v/v). The extraction is usually aided by an ultrasonic bath in order to accelerate the process.

An extraction solvent’s selection is mostly based on a comparison of the recovery results, which is time-consuming. A good approximation for the optimum selection of the appropriate solvent is performed by studying the values of the solubility parameter, ‘δ’ [9].

A calculation of the parameter is performed by calculating the square root of gasification energy per unit volume of matter [10][11], in such a way that can be calculated for the different species [9][10]. This parameter is then calculated for both the solvents and the polymers, and the optimum situation is that where the same value of ‘δ’ for a solvent and a polymer is achieved. This approximation is based on the fact that the enthalpy of mixing should be negative or close to zero to obtain a good mixing, and this is achieved when the solubility parameters are similar for a polymer and a solvent. This parameter has been used to study the presence of PBDEs, among others, in the surface of microplastics [9].

Figure 4shows a scheme of the values of the solubility parameter for many different solvents generally used in the extraction of pollutants, and also the values of ‘δ’ for different polymers [12]. In the diagram we can check that, for example, solvents such as methanol or ethanol are the best to solubilize Nylon, but n-hexane or ethyl acetate are more appropriate for LDPE. Many more values of the solubility parameter can be found in the literature, including for biopolymers [13]. 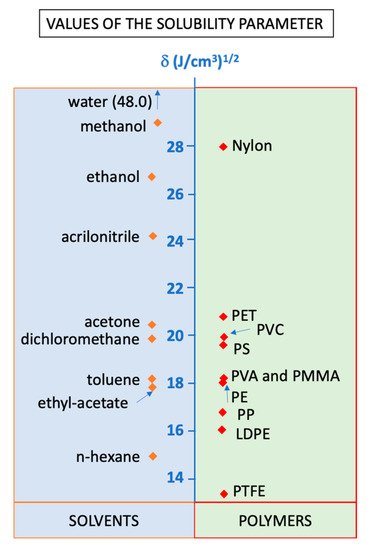 Figure 4. Diagram showing the values of the solubility parameter, δ [(J/cm2)1/2], for different solvents and polymers.

A cleanup stage is sometimes required. [17] used a C10 solid phase extraction (SPE) column for eluting PAHs with 5 mL of n-hexane:DCM at a ratio of 4:1 (v/v). Other authors [18][19] used an alumina and/or silica column for isolating PAHs or POPs. A Florisil column can also be used for that purpose, according to DiGangi et al.

As has been shown, one of the most important limitations of plastic recycling is the quality of the recycled product. For example, virgin high density polyethylene (HDPE) is commonly used for the manufacture of shower gel bottles; however, the destiny of recycled HDPE is usually related to gardening devices, such as pots for plants, or for paint packaging. Thus, currently only a few products with low added value can use recycled plastic, producing a quick saturation of the market and a real impossibility of recycling all of the plastic waste generated. In this way, if the market demand for recycled plastic does not increase enough, the paradox that the recycled plastic has to be disposed of in landfills or incinerated could occur.

The majority of recycled plastics have a grey color, low mechanical properties, bad smell and can present substances that are hazardous to health, which restricts their use in the polymers sector. In order to overcome this situation, the quality of recycled products should be improved, acting in the ‘upstream’ section, by enhancing the raw material to be recycled. For example, in the case of post-consumer packaging, the implementation of a return deposit system would reduce the cross-contamination in the plastic and the heterogeneity of materials. CO2for the extraction of residual organic contamination in recycled pellets.

Additionally, the lack of traceability of the starting material is another limitation in terms of the quality of the recycled plastic when using it in higher-value applications (‘upcycling’). The post-consumer material may contain additives that were useful in the original application, but that may be an issue for the future applications of the corresponding recyclate (Intentionally Added Substances or IAS). Thus, for example, some of the additives that were very common a few years ago and are now much more limited may appear again in recycled plastic. On the other hand, during the previous use, the plastic could have come into contact with undesired substances, such as food leftovers or rests of detergents, generating bad odors, or dangerous substances, as could be the case of pesticides.

Accordingly, in order to improve the applications of upcycling plastics, the following two types of actions are necessary: (a) to develop methods to identify possible IASs and NIASs in recycled plastics and (b) to develop technologies to reduce the amount of these compounds in recycled plastics through ‘upgrading’. In this way, different aspects associated with mechanical recycling, aiming at the improvement of this incipient industrial process, should be addressed as follows: (1) Identification of IASs/NIASs: It is necessary to deepen the study of microcontaminants (heavy metals, pesticides, polyaromatic hydrocarbons (PAHs), polychlorinated biphenyls (PCBs) and polychlorinated dioxins and furans (PCDD/Fs)), which have chemical structures very similar to those of IASs/NIASs, with an objective to identify the compounds present in recycled plastics that may negatively affect their application. (2) Removal of NIASs: In a way, recycled plastic can be considered a contaminated material, such as soil or water. The techniques used for odor elimination and contaminants’ reduction should be further explored, such as the extraction of organic substances by using environmentally friendly solvents, treatments with hot water, hot air, UV lamps and heavy solvents, among others. (3) Life Cycle Analysis (LCA): For the selection of sustainable solutions, it is necessary to make a life cycle analysis to prevent the proposed solution from having a higher environmental impact than the current situation.