Nitrogen is one of the most important limiting factors for the growth and development of plants in nature. At present, the high yield of crops largely depends on the use of nitrogen fertilizers. However, large-scale application of nitrogen fertilizers not only increases production costs but also causes environmental pollution. As a biological process between nitrogen-fixing microorganisms and legumes, symbiotic nitrogen fixation (SNF) directly converts atmospheric nitrogen into ammonia through nitrogenase [1]. Therefore, it is the most economical and environmentally-friendly way of achieving nitrogen fixation [2]. Moreover, SNF plays a significant role in enhancing the recovery of grassland ecosystems, promoting the growth of windbreak and sand fixation tree species, accelerating the remediation of heavy metal-contaminated land, improving the composition of soil nutrients, and ameliorating the agricultural weight loss and efficiency [3][4].
The formation of legume-rhizobium symbiosis is the result of mutual recognition between microorganisms and plants, as well as the interaction between signaling molecules [5]. First, flavonoid compounds released by the legume roots can induce rhizobia to produce Nod factors, which have the function as signal molecules and can be recognized by Nod factor receptors of legume plants. Then, the root hairs of legumes curl, deform and form infection threads [6] through which rhizobia penetrate the root tissue [7]. Simultaneously, some cortical cells of the root are stimulated to start dividing to form a primordial nodule [8]. The cells infected by the bacteria derive from root inner cortex cells, which differentiate and then proliferate to form the nodule meristem. The timing of initiation, development, and maturing of nodule organogenesis inside root cells has been well documented [9][10].
Nodules in legumes can be divided into two types depending on the persistence of the nodule meristem as follows: determinate nodules and indeterminate nodules, which have different characteristics in morphology [11]. Indeterminate nodules, such as those in Medicago truncatula, Pisum sativum, Vicia faba, and Trifolium repens, contain five different zones: the active meristem that allows the growth of the nodule (Zone I), the infection zone, where the cells differentiate and are infected by the bacteria (Zone II), the nitrogen fixation zone (Zone III), in which bacteroids fix atmospheric nitrogen, and the senescent zone (Zone IV), where bacteria and plant cells are deconstructed, accompanied by the destruction of symbiosis [12]. Determinate nodules, such as Glycine max and Lotus japonicus, have non-persistent meristems, and all the infected cells are always at the similar stage of development. In both determinate and indeterminate nodules, rhizobia supply nitrogen sources for the growth and development of legume plants by SNF, and in return, legumes provide carbon sources to rhizobia to sustain their growth and reproduction within the nodules [13].
There are three major approaches to increase SNF efficiency: increasing the number of nodules to improve nitrogen fixation efficiency; improving nitrogen-fixing enzyme activity, and delaying nodule senescence to extend the time of nitrogen fixation and increase nitrogen fixation amount. Among them, delaying nodule senescence and prolonging the time of nitrogen fixation are the key measures to ensure nitrogen fixation and adequate supply of nitrogen to legumes in the reproductive period and to solve the problem of late defertilization in legumes, which often occurs in pod stage when the symbiotic nitrogen fixation ability of legume crops is gradually weakened, and meanwhile it is hard to artificially supply extra nitrogen fertilizer to meet the demand at this stage.

Generally, the efficiency of nitrogen fixation in legume plants reaches a peak at 4–6 weeks after inoculation with rhizobia, after which the bacteroids differentiate and the nitrogen fixation ability is gradually weakened [14]. Nodule senescence is a complex and programmed process, including the reduction of Leghemoglobin content, structural changes of nodule cells, the decrease of nitrogenase activity, changes in the lifestyle and growth capacity of bacteria, and so on. The morphology, physiological and biochemical changes and the corresponding methods are summarized in Table 1.
During the nodule senescence, in particular, the color of the nitrogen fixation zone is converted from pink to green due to the nitration of the heme group of functional leghemoglobin (LHb) [15]. This nodule color change is caused by nitrogen biomobilization and a rapid decrease in LHb content [16]. Therefore, we can assess the degree of nodule senescence by calculating the ratio of senescent nodules to the total nodules by observing the changes in nodule color, and detect the content of LHb by using the cyanmethemoglobin method, which is a rapid, quantitative method for the determination of LHb in legume nodules [17][18]. Besides, we can also examine the content of LHb at the transcriptional and protein levels by using qPCR and Western blotting analysis.
The most representative characteristic of nodule senescence is the structural changes of the nodule cells, including progressively reduced electron density, the appearance of numerous vesicles in the cytoplasm, increased number of peroxisomes, the formation of complex elongated structures by mitochondria, symbiotic membrane disintegration, damaged cell wall, and lysis of bacteroids [14][19][20]. Generally, paraffin sections of nodules are made to observe the dynamic changes of senescence zone [21], the TdT-mediated dUTP-biotin nick end-labeling (TUNEL) staining assay is used to detect the programmed cell death or apoptotic-like cell death in nodules [22][23], transmission electron microscopy is utilized to observe the morphology of the inner cells, the electron density of the symbiosis, and the integrity of the symbiotic membrane [23], and in situ live/dead staining assay has been found to detect the rhizobia with intact cell membranes or damaged membranes [24][25].
Table 1. The morphology, physiological and biochemical changes of legume nodule senescence and the corresponding detection methods.
Decreased nitrogenase activity, lifestyle and growth capacity of bacteria are also the major features of nodule senescence [26][27]. The decline in nitrogen-fixing enzyme activity is measured using the acetylene reduction assay (ARA), which is a high sensitivity, rapid, low cost, and nondestructive method [28][29]. Rhizobium is an important player in nodule senescence, and the morphological and physiological characteristics of senescent nodules have revealed that half of the rhizobia surviving in a hemibiotrophic-like lifestyle cannot grow [26][27]. Therefore, testing the lifestyle and growth capacity of bacteria is also an efficient method to evaluate nodule senescence.
Legumes can control the formation of symbiosis and the lifespan of nodules through the molecular dialogue between metabolites and hormones [5][30]. Therefore, nodule senescence can be detected by measuring the metabolites and hormone signals that determine the onset of nodule senescence in plants [31]. For example, endogenous ethylene plays a role in the formation and position of nodule primordia [32][33][34].Two ethylene inhibitors silver ions (Ag+) and aminoethoxy-vinylglycine (AVG) can counteract the interfering effect of ethylene, we therefore measured the position of nodule formation in the presence of AVG or Ag + to test whether the endogenous ethylene provided the position information to control the formation of nodule primordia [34].Furthermore, according to known molecular markers associated with nodule senescence, several methods such as laser microdissection, qPCR, and ACC immunolocalization are employed for nodule senescence detection [35].

Delaying nodule senescence and/or prolonging nitrogen fixation time are the key measures to solve the problem of late defertilization of legumes, which is critical for the planting of legumes and agriculture. Nodule senescence is a genetically controlled process, and transcriptomic studies of the model legumes L. japonicus and M. truncatula have identified lots of up- or down-regulated genes in senescent nodules [19][36][37][38]. In soybean, we analyzed the nodule development at five different developmental stages (branching stage, flowering stage, fruiting stage, pod stage and harvest stage), and found many nodule senescence-related genes, including those encoding soybean cysteine proteases, cystatins, cysteine-rich proteins and transcription factors, as well as proteins involved in plant-pathogen interactions [21]. We performed whole-genome surveys of soybean papain-like cysteine protease (PLCP) family genes [39], soybean cystatin family genes [40] and soybean C2H2 zinc finger family genes [41], analyzed their expression profiles during nodule development and senescence, and identified dozens of candidate genes related to nodule senescence. Besides, many genes have been studied to play roles in regulating the nodule senescence of legume plants in recent years. These genes mainly include cysteine proteases, transcription factors, peptides, enzymes, and other functional genes (Figure 1). 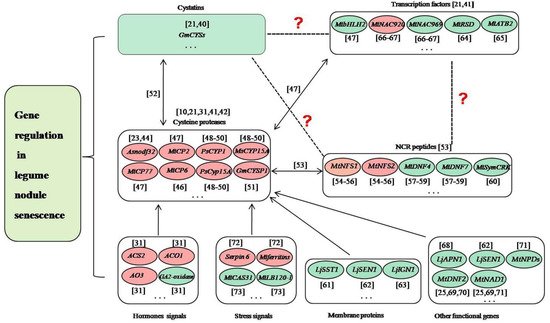 4. Abiotic Factors in the Regulation of Nodule Senescence 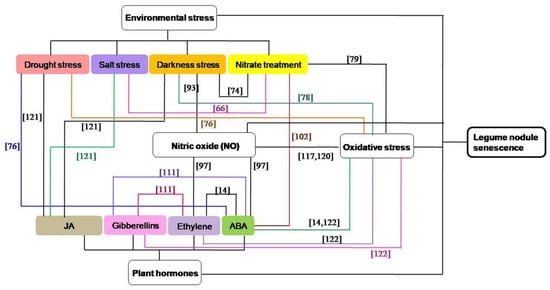