Elements involved in the tryptophan metabolism pathway and its derivatives are considered factors that play a wide role in silencing the immune system. However, it seems that those agents contribute to tumorigenesis through a direct impact on cancer cells.

The intensive development of science in the field of immuno-oncology gives hope for a thorough understanding of the changes taking place in the body during the development of neoplasms. One of the pathways that has been particularly strongly studied in this context is the metabolism of tryptophan (TRP). Efforts are being made to assign a pro- or anti-tumor role to individual elements of this metabolic pathway. However, the complexity and multiplicity of intertwined processes still leave more questions than answers and represent an open field for future research.

For many years, the role of the immune system in cancer development has been under detailed scientific investigation. It is known that immune cells have an ability to recognize developing malignant cells. On the other hand, the enhanced activity of regulatory Tcells (Treg) leads to a decreased immune response and facilitates tumor growth. Moreover, cancer cells secrete factors that favor immunosuppressive microenvironment development, which further enables them to avoid the immune mechanism. This phenomenon is called “immunoediting” and is based on the hypothesis, that the immune system can be both—a tumor suppressor and promotor. It is divided into three phases—elimination, equilibrium, and escape. The first stage is based on observations that cancer cells express specific antigens that are recognized by dendritic cells (DCs) and presented to lymphocytes T, which in turn eliminate pathological cells through cytotoxic mechanisms [1]. In this step, tumor cells can be recognized also by macrophages and natural killers, which altogether leads to Tcell activation [2]. If the immune system eliminates all of the abnormal cells, the whole process of tumor development stops. However, some growing cells seem to be resistant to host immune mechanisms, which leads to the second phase—equilibrium. In this step, dynamic processes remain in balance, but cancer cells gain features that allow them to avoid immune recognition with the following destruction. Factors such as IL-12, IL-23 (interleukin 12, 23) and the elements of adaptive immune response keep tumor cells in a silent state [3]. However, if malignant cells obtain superiority, they progress to the third phase of immunoediting—escape—and become clinically apparent. To reach this state, cancer cells expand multiple mechanisms which facilitate their immunological evasion. One of them is based on a decreased expression of MHC-I (major histocompatibility complex, class I), with the following disturbances in antigen expression or presentation. This leads to inhibition in an antigenicity and moderates a recognition of tumor cells by immune factors. Another way to silence host defense response toward developing malignant cells is the production of molecules, which serve as immune inhibitors. Among them, programmed death-ligand-1 (PD-L1) is one of the most studied and well-known molecules, which already serves as a pharmacological target point in clinical practice. This ligand, after binding to its receptor PD-1 (programmed cell death protein 1) on immune cells, exerts multiple effects on them. Enhanced conversion of CD4+ Tcells into immunosuppressive Treg, decreased cytotoxicity of CD8+ Tcells, reprogramming macrophages into M2 subtypes, which inhibit immunity, are among well-studied effects acquired after PD-L1/PD-1 pathway activation [4][5]. The third and the most complex mechanism triggered by cancer cells for immune evasion is the excretion of prosurvival factors and molecules, which enable the production of an immunosuppressive microenvironment. It can be obtained by the secretion of cytokines with the following recruitment of Treg and MDSCs (myeloid-derived suppressor cells), and changes in amino-acids metabolism. Arginine, glutamine, leucine, and tryptophan are among those which are now under investigation and establishment of their function will help to better understand the biology of cancer [6][7][8]. Due to the broad role of each of the listed amino-acids, it is not possible to describe them in detail in one manuscript. For this reason, the given paper focuses selectively on one of them—TRP—and its metabolism via the kynurenine pathway (KP) as a factor enhancing tumor development.

3. Tryptophan Metabolism and Its Modulators

Tryptophan, an endogenous amino-acid essential for proper organism development in the course of further metabolic transformations, is converted into indole, with the participation of intestinal microflora, into serotonin (5-HT) under the influence of TRP hydroxylase 2 enzymes, and in the highest level is metabolized through kynurenine pathway [9]. The latter involved two isoforms of indoleamine oxidases (IDO1, IDO2) and tryptophan 2,3-oxidase (TDO2) which are rate-limiting enzymes, that degrade TRP into kynurenine (Kyn). The next steps lead to the transformation of Kyn into kynurenic acid (KYNA), 3-hydroxykynurenine (3-HKYN), antranilic acid (AA) and further production of xanturenic (XA), picolinic (PA) and quinolinic (QUIN) acids. In the final step, active NAD+ (nicotinamide adenine dinucleotide) arises. Most TRP metabolites are active and exert a multiple and differentiated role in cancer development, which is described in detail below. Here, it should be emphasized that malignant cells can produce individual elements of KP, as well as factors that enhance the activity of this pathway. IDO1 expression is observed in almost all human tissues and its expression upraises with age, IDO2 at the highest level can be observed in the liver, epididymis and brain, and TDO2 except the liver and brain, can be found in the placenta [10]. All of them may be detected in different types of cancers with various severity. Those three enzymes, as rate-limiting factors of TRP metabolism, gained the greatest scientific interest and are now under intense development as a potential therapeutic goal in cancer immunotherapy. Understanding which factors take part in controlling KP elements can shed a light on new therapeutic strategies in oncology. The main molecules involved in IDO-1 activity regulation are proinflammatory agents, i.e., lipopolysaccharides, pathogen-associated molecular patterns, TGF-β (transforming growth factor-beta), and IFN-γ (interferon-gamma) at the forefront. Chronic inflammation is a hallmark of cancer, so the involvement of the aforementioned factors in both processes, i.e., inflammation and expression of TRP catabolizing enzymes, suggests that kynurenine pathway elements play a role in carcinogenesis. An additional argument indicating the involvement of KP in the development of tumorigenesis is an observed correlation between the presence of the known proto-oncogene MYC and overexpression of tryptophan transporters and its increased intracellular transport. Furthermore, the level of KP enzymes is significantly higher in the presence of MYC, when compared to a knock-out cell line [11]. Another oncogene, whose activity influences IDO1 regulation, is the c-KIT proto-oncogene. Balachandran et al. showed that the inhibition of KIT signaling significantly decreases IDO1 activity, confirming the role of this oncogene in KP regulation [12]. Conversely, the high activity of tumor suppressor protein Bin-1 was connected with low IDO1 expression and better prognosis for patients [13], which additionally links the TRP metabolite pathway with tumor development.
An expression of TDO2 is controlled by corticosteroids, and it was shown that cortisol increases gene transcription of this protein [14]. Other hormones, such as estrogen and testosterone, seem to have no impact on TDO expression [15][16]. Still, TRP itself induces TDO2 expression and thus its high dietary intake is a stimulator for this protein. Moreover, in mice models, a high-fat diet was indicated as a factor uprising liver TDO2 level [17]. This may point to a potential role of a balanced diet in cancer prevention. In regards to cancer development and KP regulation, the role of the active form of vitamin B6 (PLP) cannot be overlooked, as its low serum level is correlated with a higher risk of disease occurrence. PLP is a cofactor of KP enzymes, i.e., kynureninase and kynurenine aminotraspherases, which take part in the transformation of Kyn to AA and HK to HAA. Therefore, low B6 supply and its systemic deficiency lead to the accumulation of procancerous metabolites [18]. The gathered information shows how complex and multifactorial the tryptophan metabolism pathway is. Moreover, most of the formed metabolites enhance cancerogenesis, but some of them seem to play a protective role, which makes the whole pathway more challenging to use as a therapeutic target. The further part of this manuscript describes the known aspects of KP elements in cancerogenesis modulation (Figure 1). 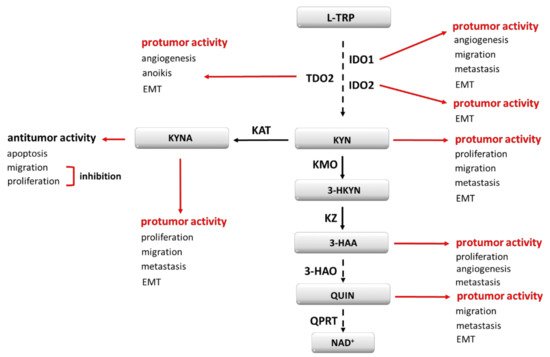 4. IDO1 and Its Role in Cancer Development

5. TDO2, IDO2 and Their Role in Cancer Development