Vaccine candidates against COVID-19 have been developed at an unprecedented speed, with more than 200 vaccine candidates currently under investigation. Among those, 20 candidates have entered the clinical Phase 3 to evaluate efficacy, and three have been approved by the European Medicines Agency. The aim of immunization is to act against infection, disease and/or transmission. However, the measurement of vaccine efficacy is challenging, as efficacy trials need to include large cohorts with verum and placebo cohorts. In the future, this will be even more challenging as further vaccine candidates will receive approval, an increasing number of humans will receive vaccinations and incidence might decrease. To evaluate novel and second-generation vaccine candidates, randomized placebo-controlled trials might not be appropriate anymore. Correlates of protection (CoP) could be an important tool to evaluate novel vaccine candidates, but vaccine-induced CoP have not been clearly defined for SARS-CoV-2 vaccines.

The ongoing coronavirus disease 2019 (COVID-19) pandemic has caused immense mortality and morbidity, and has also placed huge social and economic burdens on society. At the beginning of 2021, the global case count of infections with severe acute respiratory syndrome coronavirus 2 (SARS-CoV-2) has passed 110 million, with more than 2.5 million confirmed deaths due to the infection [1].

Vaccines can be a key element to limit viral spread. The search for an efficient vaccine has started in January 2020 and progressed at an unprecedented scope, both in the variety of vaccine platforms and in number of candidate vaccines under investigation. One year later, there are more than 250 vaccine candidates in development with 58 having progressed to clinical stages. Detailed lists can be found on various websites, e.g., by the World Health Organization (WHO) [2], London School of Hygiene & Tropical Medicine [3] or the New York Times [4].

In the beginning of 2021, three vaccine candidates have received regular licensure or emergency use authorization, including two mRNA-based and one non-replicating viral vector-based vaccine, in the United States (US), the European Union (EU) and the United Kingdom (UK). A second viral vector vaccine by Janssen (Johnson & Johnson) has been approved by the Food and Drug Administration (FDA) and is awaiting approval by the European Medicines Agency (EMA).

All four vaccines have announced efficacies ranging from 57% to 95% in Phase 3 trials in preventing COVID-19 [5][6][7][8]. Comparable efficacy was demonstrated in different populations in terms of gender, age or ethnicity, while efficacy and safety for populations such as pregnant women or children are still under investigation. Importantly, these four vaccines demonstrated mostly mild to moderate and transient reactogenicity [5][6][7][8]. Of note, it is yet to be determined if the current vaccine candidates are efficacious in reducing or even blocking transmission. A vaccine that confers sterilizing immunity or at least decreases the levels of viral shedding and subsequently infectiousness could significantly impact the containment of SARS-CoV-2.

The duration of immune response to SARS-CoV-2 vaccination remains to be investigated in the upcoming months. Antibody titers induced by natural coronavirus (CoV)-infection have been reported to wane over time. Specifically, human challenge models in past decades have demonstrated the possibility of re-infection with two common cold coronaviruses hCoV-229E and hCoV-OC43 [9][10]. An infection of SARS-CoV-1 or the middle east respiratory syndrome (MERS)-CoV revealed antibody responses that gradually decline over time [11][12]. The current limited data for SARS-CoV-2 infection indicates that humoral immune response persists for at least several months [13][14]. In the light of emerging SARS-CoV-2 variants, most studies assessed protection against the prototype SARS-CoV-2 sequence B.1 or the D614G variant. Whether humoral responses to SARS-CoV-2 may prevent re-infection with novel variants like B1.1.7, B1.315 or P.1 remain unclear to date. First analyses however show reduced neutralization of convalescent plasma in vitro concerning the P.1 or B1.315 variant [15].

Efficacy for the recently approved vaccines has been assessed in randomized placebo-controlled clinical trials (RCT). These trials are considered the gold-standard in clinical research, as they limit the potential for bias in data collection and deliver the highest level of scientific evidence. However, these trials are extremely demanding in terms of resources of any kind. Their implementation may become even more difficult for novel and second-generation vaccine candidates once infection incidence has decreased, or vaccines against SARS-CoV-2 have been properly licensed. With regard to potentially upcoming mutations in the SARS-CoV-2 genome resulting in an escape from human neutralizing antibody (nAb) responses, the introduction of adapted vaccines may be essential to halt the pandemic. RCT might prove to be no longer feasible due to time, cost or ethical reasons. A reasonable alternative would be the measurement of immunity. An immune response that is responsible for and statistically interrelated with protection is named correlate of protection (CoP). The use of CoP may allow the prediction of clinical outcomes (protection against disease or infection) after vaccination or natural infection [16].

CoP can be divided into mechanistic CoP (mCoP), which are causal for protection, and non-mechanistic CoP (nCoP), which are a predictor of protection without being its causal agent [17]. A surrogate is an immune response that substitutes for the true immunological correlate of protection. The identification and measurement of CoP are often challenging. A potential surrogate endpoint for a SARS-CoV-2 vaccine would most likely depend on the characteristics of the vaccine including antigen, method of delivery and method of antigen presentation utilized by the vaccine.

SARS-CoV-2 infection can induce SARS-CoV-2 specific antibodies, CD4+ and CD8+ T-cells (Figure 1 and Figure 2), which target the four structural proteins spike (S), matrix (M), nucleocapsid (N) and envelope (E) as well as to some extent the non-structural proteins [18]. It is assumed that disease severity may critically impact the quality, quantity and duration of immune responses to SARS-CoV-2. Further, numerous reports have discussed the role of nAb and T-cell responses on the severity of the clinical course in COVID-19 [19][20], but there are still knowledge gaps on the broadness, robustness and durability of immune responses. Data on SARS-CoV-2 immunity are emerging rapidly and updates of novel findings are reported by several webpages like the UK biobank report [21]. 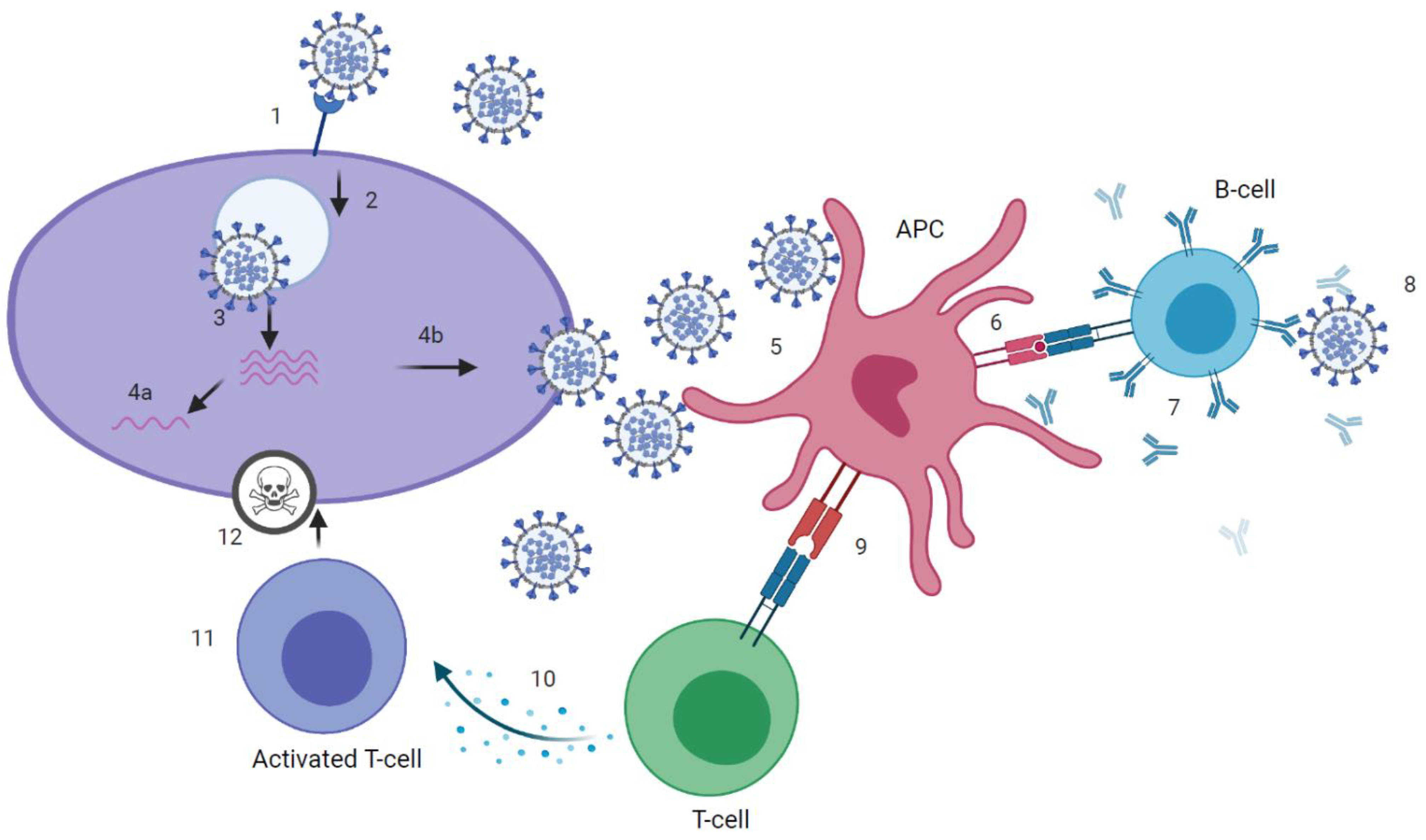 Figure 1. Immune response to severe acute respiratory syndrome coronavirus 2 (SARS-CoV-2). (1) attachment of SARS-CoV-2 virus to host cell via angiotensin-converting enzyme 2 (ACE2)-receptor. (2) cell-entry. (3) membrane fusion and RNA-release into host cell. (4a) presentation of RNA and viral proteins to Toll-like receptor (TLR) and activation of innate immune response. (4b) assembly of virions. (5) uptake of virus by antigen presenting cell (APC). (6) presentation of antigens, including epitopes, to B-cell receptor (BCR). (7) production of binding and neutralizing antibodies by B-cells that, ideally, (8) neutralize the virus. (9) presentation of antigens, including epitopes, to T-cell receptor (TCR). (10) Activation of T helper (Th) cells and production of cytokines, that, recognized by (11) cytotoxic T-cells, (12) kill the virus. Graphic created at biorender.com. 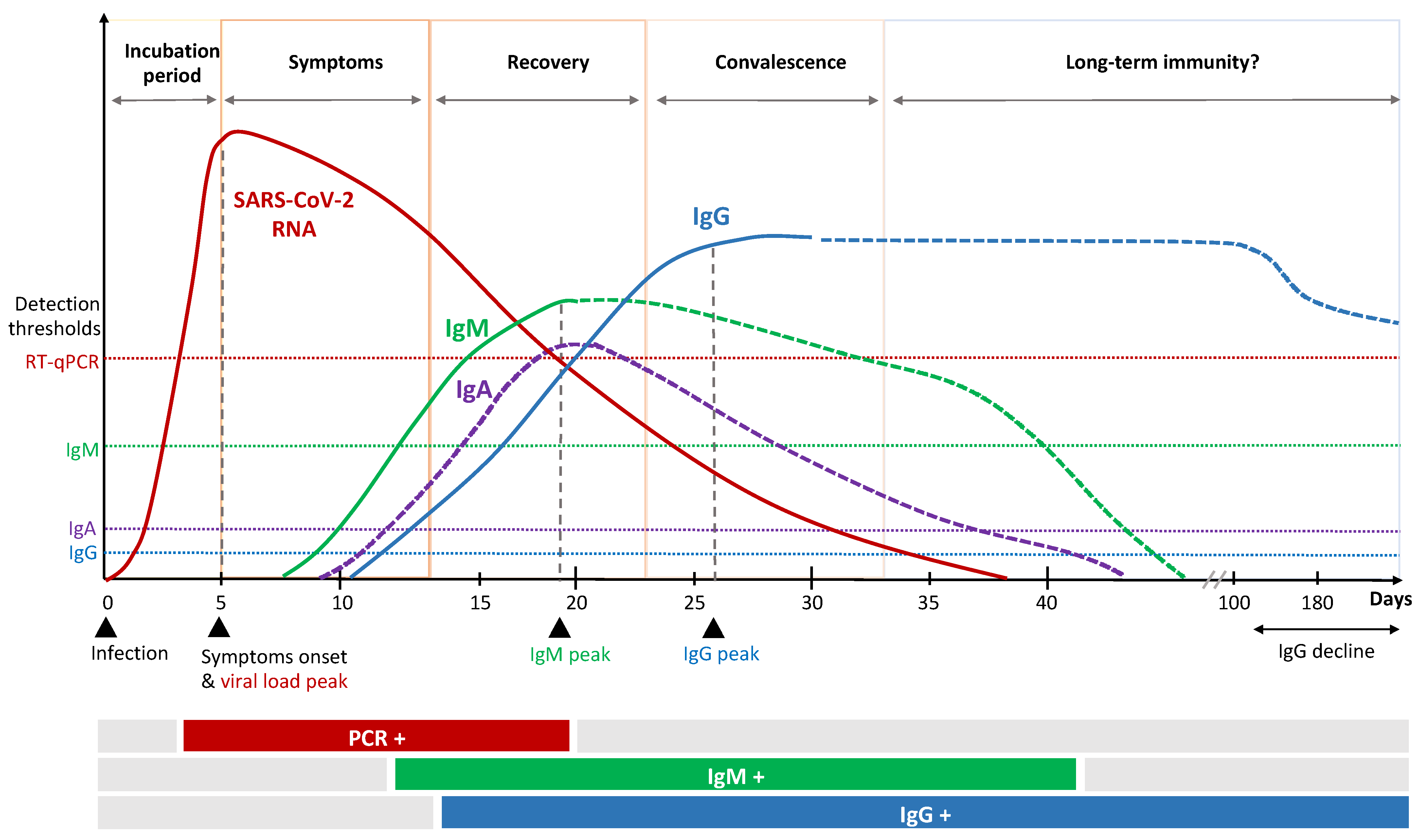 Vaccines against COVID-19 will play a pivotal role for limiting the pandemic. The majority of current vaccine candidates utilize S (or parts thereof like RBD), due to its crucial role in mediating viral entry into cells.

Three vaccine candidates (BioNTech/Pfizer, Moderna & AstraZeneca, Cambridge, UK) have received approval by the EMA, and one is under investigation by the rolling review (Janssen, Belce, Belgium). We here focus on these four forerunner vaccine candidates and delineate their immunogenicity data gained in the framework of Phase 1–3 trials.

The vaccine candidate AZD1222 (Astra Zeneca) is based on a replication deficient chimpanzee adenoviral vector (ChAdOx1) encoding the S protein [7][22]. In a Phase 2/3 trial, volunteers received 5 × 1010 virus particles (vp) as a standard dose for both prime and boost immunization. In addition, a small cohort received a lower dose (2.5 × 1010 vp) as prime immunization. The different study sites used a boost interval that ranged between 4 to 12 weeks. Efficacy in prevention of COVID-19 varied from 62% to 90%, with the variance likely due to heterogeneity in dosing, prime-boost intervals and diversity of study populations. While further studies are ongoing, the vaccine has been approved in the UK with an admitted variance in prime-boost interval between 4 and 12 weeks. The EU has just recently approved the vaccine [23].

Immunogenicity data were reported from a Phase 1/2 trial conducted in the UK [24]. Here, anti-spike IgG responses were observed 28 days after prime with a further increase of titers following boost immunization. Neutralizing antibodies were observed in 91% of participants after prime and 100% after boost immunization in an MNA80 (live SARS-CoV-2 microneutralization) assay. Cellular immunity was also induced by prime and boost immunization, while the boost did not significantly impact the IFN-γ responses (measured with IFN-γ enzyme-linked immunosorbent spot (ELISpot)).

Ad26.COV2.S is another adenovirus-vectored vaccine developed by Janssen. The vaccine is based on a recombinant, replication deficient adenovirus (Ad26) encoding a full-length and stabilized spike protein [25]. In a placebo-controlled phase 1/2a trial, a low dose (5 × 1010 vp) and high dose (1 × 1011 vp) were evaluated as single dose or combined with a booster dose after 56 days. The single dose regimen showed promising results in immunogenicity analyses that warrant further evaluation. After a single vaccination, nAb titers were detected in 90% or more of participants on day 29 and 100% on day 57. Spike-binding antibodies as measured by ELISA correlated well with nAb titers, especially in younger adults. CD4+ T-cell responses on day 14 were induced in 76%–83% of the participants (depending on the dose) with a trend toward type 1 helper T-cells. CD8+ T-cell responses were induced in 51%–64% of participants. Cellular responses were generally lower in higher age groups.

Preclinical data revealed that a single injection resulted in complete protection in lower and upper respiratory tract in rhesus macaques [26]. Clinical data from the Phase 1/2 study also showed induction of T-cell responses and importantly nAb in all participants after a single dose of Ad26.COV2.S (5 × 1010 vp). Janssen therefore initiated a Phase 3 study to evaluate the efficacy of a single dose regimen (clinicaltrials.gov: NCT04505722). By the end of January 2021 a press release was published [8], announcing that the single-shot regime provides efficacy of 57%–72% against moderate to severe COVID-19 and is 85% effective in preventing severe COVID-19. In addition, the efficacy of a two-dose regimen is currently investigated in a parallel trial (clinicaltrials.gov: NCT04614948).

RNA vaccines have been the forerunners in vaccine development against COVID-19. The two RNA-based vaccines developed by BioNTech/Pfizer and Moderna have already received approval from EMA and FDA in December 2020/January 2021. Both are lipid nanoparticle (LNP) formulated nucleoside-modified mRNAs, encoding the stabilized prefusion SARS-CoV-2 spike protein that are administered intramuscularly. Pfizer/BioNTech’s BNT162b2 contains 30 µg of RNA and is administered 21 days apart [5], while Moderna’s mRNA127 contains 100 µg of RNA and is administered by an interval of 28 days [6].

Immunization with BNT162b2 induced binding IgG antibodies against S1 following a single injection, while nAb were detectable in the majority of vaccinees earliest at day 28, seven days following the boost immunization [27]. CD4+ and CD8+ T-cell responses on day 29 were induced in 94.1% (32 out of 34) and 91.9% (34 out of 37) of participants, respectively. T-cell analysis was conducted by an ex vivo IFNy ELISpot assay using stimulation of either CD4+ or CD8+ cells by overlapping peptide pools covering the spike protein. Vaccine efficacy was analyzed in the Phase 3 trial including over 40,000 volunteers that received either BNT162b2 or placebo. Here, the case split of 8 versus 162 COVID-19 cases in the verum and the placebo arm demonstrated a 95% efficacy in prevention of COVID-19 [5].

The mRNA-1273 vaccine by Moderna showed immune responses after the prime injection, with a booster injection resulting in increased titers of both binding and nAb in all participants evaluated in the Phase 1 trial [28]. T-cell responses were analyzed using two pools covering S1 and S2. Here, a Th1-dominant CD4 T-cell response was observed, while CD8+ T-cell responses were low when analyzing responses by intracellular cytokine-staining assay using flowcytometry. In the Phase 3 efficacy trial, over 30,000 volunteers were enrolled and received either mRNA-1273 or placebo. Vaccine efficacy in prevention of COVID-19 was 94.1% with a case split of 11 versus 185 participants in the vaccine and placebo group, respectively [6].

Details on these four forerunner vaccines are listed in Table 1.