Numerous viruses hijack cellular protein trafficking pathways to mediate cell entry or to rearrange membrane structures thereby promoting viral replication and antagonizing the immune response. Adaptor protein complexes (AP), which mediate protein sorting in endocytic and secretory transport pathways, are one of the conserved viral targets. We present here different mechanisms of viral interference with AP complexes and the functional consequences that allow for efficient viral propagation and evasion of host immune defense. The best described examples are interactions of human immunodeficiency virus and human herpesviruses with AP complexes. Several other viruses, like Ebola, Nipah, and SARS-CoV-2, are pointed out as high priority disease-causative agents supporting the need for deeper understanding of virus-AP interplay which can be exploited in the design of novel antiviral therapies

Viruses are obligate intracellular pathogens that rely on host cell machinery in various stages of their life cycles. A great number of host factors that are indispensable or contribute to successful viral infections has been identified. Multiple studies have shed light onto the unique strategies employed by individual viruses, but the accumulating data also indicate the overlapping patterns of viral-host interplay [1][2]. Viruses have evolved a plethora of strategies to counteract the mechanisms of host’s immune response at various stages of their life cycles. From internalization of viral particles and replication of the viral genome to viral assembly and release of mature virions, the interference with cellular trafficking and sorting machinery appears to be an asset for viral propagation and antagonizing of host antiviral response [3]. Clathrin-mediated endocytosis (CME), a major cellular ubiquitous route of receptor internalization, is a common route utilized by viruses, particularly of small and intermediate size. Regardless of the viral receptor used, CME is dependent on the oligomeric clathrin and adaptor-protein (AP) complexes that coordinate the recruitment of endocytic cargo proteins and assembly of clathrin into a polyhedral lattice at the plasma membrane and the trans-Golgi network (TGN) [4][5][6][7][8]. A large body of evidence showed that many viral genera take advantage of cellular AP complexes, making them conserved viral targets [9]. It was established long ago that CME can be a part of the productive infectious cascade with the example of Semliki Forest virus [10]. Since then, numerous interactions of clathrin components and viral proteins or virions have been documented. During coevolution with host organisms, viruses have acquired genome sequences identical or closely resembling to motifs used by host proteins for the interaction with AP complexes. This enables them not only to maximize their own replication and assembly but importantly to interfere with the proper sorting and expression of host molecules hazardous to their survival.

We will present different mechanisms of viral interference with cellular AP complexes and their functional consequences that allow for efficient viral propagation and evasion of host’s immune defense. Viruses discussed in the review are listed in Table 1 and presented following the Baltimore classification of viruses which is based on the structure of the viral genome and the manner of messenger RNA (mRNA) synthesis.
Table 1. Viral families and their respective AP interaction complexes.
Here we presented a comprehensive overview of human viruses, including their most relevant animal models, that exploit members of the AP-family for their own trafficking, propagation, and avoidance of antiviral response (Table 1, Figure 1). AP-1 complex was found to be implicated in viral proteins intracellular trafficking, in reducing the surface expression of MHC I, in release of viral particles and even in viral replication. AP-2 complex is widely exploited for viral entry but also for endocytosis of immune signaling molecules targeted by viruses. AP-3 is involved in endolysosomal sorting and trafficking of viral proteins, as well as in viral particles production. AP-4 is shown to be important for viral replication, intracellular transport, and virion release, while AP-5 mediates intracellular transport of HIV-2 Gag. Among the discussed AP-interfering viruses, SARS-CoV and -2, CCHFV, EBOV, and NiV are listed in the WHO Research and Development Blueprint, an effort aimed at reducing the time of development and distribution of vaccines and treatments in public health emergencies. Identification and targeting of host trafficking pathways universal for unrelated viral pathogens is a promising approach to advance the discovery of new antiviral therapeutics. As an example, N-(p-amylcinnamoyl) anthranilic acid (ACA) was found to interrupt μ2-adaptin-virus interaction and exhibits in vivo activity against several viruses, including IAV, Zika virus, MERS, and SARS-CoV-2 [9]. Deeper understanding of virus-AP interplay is a premise for better characterization of currently known and yet uncovered host targets hijacked by multiple viral families. 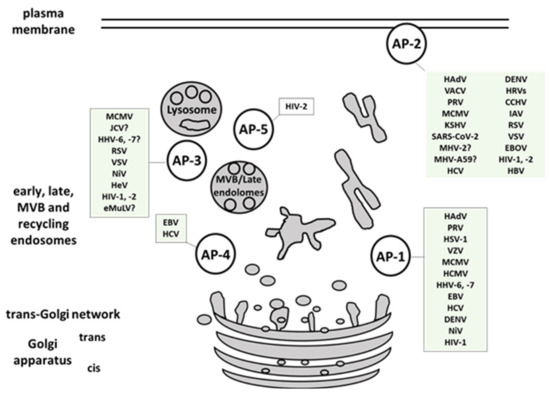