The corpus luteum is a temporary endocrine gland in the ovary. In the ovarian cycle, repeated patterns of specific cellular proliferation, differentiation, and transformation occur that accompany the formation and regression of the corpus luteum. Molecular mechanism events in the ovarian microenvironment, such as angiogenesis and apoptosis, are complex. Recently, we focused on the role of RAS protein in the ovarian corpus luteum. RAS protein plays a vital role in the modulation of cell survival, proliferation, and differentiation by molecular pathway signaling. Additionally, reproductive hormones regulate RAS activity in the cellular physiological function of ovarian follicles during pre-ovulatory maturation and ovulation. Thus, we have reviewed the role of RAS protein related to the biological events of the corpus luteum in the ovary.

The ovary is a dynamic female reproductive organ that undergoes many structural and functional transformations as it fulfills its two significant roles of producing female gametes and synthesizing sex steroid hormones [1]. In the ovarian cycle, repeated patterns of specific cellular proliferation, differentiation, and transformation occur that accompany the process of follicular development and the formation and function of the corpus luteum [2]. The ovarian cycle is a highly orchestrated, and complex developmental process that depends on functional interactions and critical signaling pathways that communicate between the ovarian microenvironment elements, including the oocyte, granulosa cells, theca cells, and surrounding stromal components, including vascular and immune cells [3]. In cellular signaling, the monomeric small GTPases (small G proteins) are known to play an important role in diverse molecular processes. The small-G-protein family consists of numerous proteins with varying degrees of homology, one of which is a guanosine nucleotide-binding protein (RAS) [4].
RAS family proteins include 23 genes coding for at least 25 proteins that are divided into eight paralog groups based on sequence identity, structure, and function: RAS, RAS-like (RAL), RAS-related protein (R-RAS), RAS-like protein in tissues (RIT), RAS-related protein Rap (RAP), RAS homolog enriched in brain (RHEB), Dexamethasone-induced RAS-related protein (RASD), and GTP-binding protein Di-RAS (DIRAS) [5]. The paralog group of RAS proteins is composed of four isoforms (H-RAS, N-RAS, K-RAS4A, and K-RAS4B) that are encoded by three genes, H-RAS, N-RAS, and K-RAS [6]. RAS family proteins are membrane-associated, small GTPases that have the function of transmitting a multitude of cellular signals [7]. RAS family proteins mediate extracellular signals, transduced through their receptors, with multiple signaling pathways, and consequently regulate a wide array of cellular processes [8]. The RAS family proteins act as binary molecular switches that cycle between active guanosine triphosphate (GTP)-bound and inactive guanosine diphosphate (GDP)-bound states [9]. RAS family proteins play a vital role in the modulation of cell survival, proliferation, and differentiation by signaling through a set of molecular pathways [10]. Those molecular functions of RAS family proteins exhibit an essential role that co-occurs in the repeated pattern of physiological change during the ovarian cycle. Moreover, RAS and RAS GTPases are changed in the development and regression of the corpus luteum. However, the function of RAS in the ovarian corpus luteum is not clear. This review aims to discuss the role of RAS family proteins related to biological events in the ovarian corpus luteum.

2. Potential Function of RAS in the Ovary 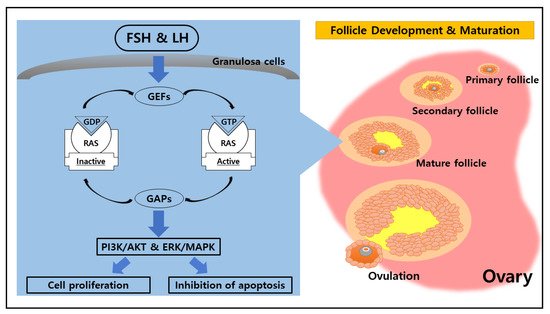 Figure 1. Role of RAS in the ovarian physiological cycle. Ovarian function is regulated by chemical messengers such as follicle-stimulating hormone (FSH) and luteinizing hormone (LH). Both FSH and LH coordinate cellular activities through the small G protein (RAS), which mediates the upstream signal from FSH and LH to regulate the PI3K/AKT and ERK/MAPK pathways. The activation of those pathways leads to cell proliferation and inhibition of apoptosis, which is essential for follicle development and maturation as well as ovulation within the ovary.

3. The Likelihood of a Novel Role of RAS in the Ovarian Corpus Luteum 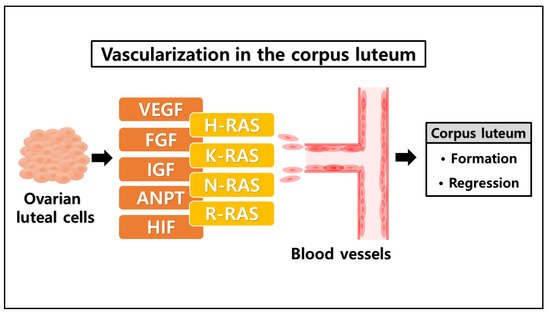