In plant−virus interactions, the plant immune system and virulence strategies are under constant pressure for dominance, and the balance of these opposing selection pressures can result in disease or resistance. The naturally evolving plant antiviral immune defense consists of a multilayered perception system represented by pattern recognition receptors (PRR) and resistance (R) proteins similarly to the nonviral pathogen innate defenses. Another layer of antiviral immunity, signaling via a cell surface receptor-like kinase to inhibit host and viral mRNA translation, has been identified as a virulence target of the geminivirus nuclear shuttle protein. The Geminiviridae family comprises broad-host range viruses that cause devastating plant diseases in a large variety of relevant crops and vegetables and hence have evolved a repertoire of immune-suppressing functions.

Plants, like any other organism, are frequently exposed to infections caused by a diversity of pathogens. The microbe perception by the plant via cell surface and intracellular receptors is crucial for the activation of plant defenses during pathogen attack [1][2]. Conversely, the recognition of the host enables the pathogen to activate virulence strategies. The receptor-mediated innate immune system is broadly divided into two lines of defense. The first line of plant defense against pathogens is represented by cell surface-localized pattern recognition receptors (PRRs), which sense and recognize pathogen-associated molecular patterns (PAMPs) presented by the pathogens, or danger-associated molecular patterns (DAMPs), endogenous signals released by the host upon infection [3][4]. Upon PAMP recognition, PRRs are activated to initiate PAMP-triggered immunity (PTI), a relatively weak defense barrier that inhibits most invading organisms [5][6]. Recent studies have demonstrated that viruses, like nonviral pathogens, both activate and suppress PTI-like responses [7]. Therefore, successful infection depends on PTI suppression by virulence effectors eliciting effector-triggered susceptibility (ETS) [8][9][10].

To overcome these virulence strategies, plant cells have evolved a second line of defense called effector-triggered immunity (ETI), activated in resistant genotypes upon specific interactions between host intracellular receptors (resistance proteins; R) and pathogen avirulence (Avr) effectors [11]. Therefore, many effectors that activate ETI (avirulence factors) in resistant genotypes have evolved to suppress PTI as virulence factors [8][12]. The nonviral pathogens effectors are delivered into the apoplast or injected into the cytoplasm of plant cells via a microbial secretion system [13]. In contrast, viral effectors are synthesized intracellularly and promote virulence by interfering with the components of the host defense system [7][14]. Due to the limited coding capacity of viral genomes, virtually all virus-encoded proteins, including essential proteins required for infection, can function as avirulence factors in genotypes harboring the cognate R gene. Therefore, viral avirulence factors are often required for a successful infection and almost invariably act as virulence factors in susceptible hosts. Viral effectors are considered here as virus-encoded proteins that interfere with host defenses to promote virulence.

The Geminiviridae family represents a group of plant DNA viruses that cause severe diseases in many crops, a major constraint to agricultural productivity and food security. This family includes nine genera (Mastrevirus, Eragrovirus, Becurtovirus, Capulavirus, Curtovirus, Topocuvirus, Turncurtovirus, Grablovirus, and Begomovirus), which comprise viruses with monopartite or bipartite circular single-stranded DNA genomes of 2.6 to 3.0 kb [19] (Figure 1). The viral genomes replicate via dsDNA intermediates containing complementary-sense (CS) and virion-sense (VS) strands (Figure 1). Proteins encoded by the CS strand are called C1-C5 and by the VS strand, V1 and V2. In bipartite begomoviruses, the ORF designations incorporate A (AC1−AC5, AV1−AV2) or B (BC1, BV1) from DNA-A and DNA-B. These designations are often replaced with protein function, including replication initiator protein (Rep/AC1/C1), transcriptional activator protein (TrAP/AC2/C2), replication enhancer protein (REn/AC3/C3), coat protein (CP), movement protein (MP/BC1), and nuclear shuttle protein (NSP/BV1). Due to the limited coding capacity of the viral genomes, the encoded proteins evolved into multifunctional proteins to harbor both the virus cycle-supporting and host immunity-suppressing functions. 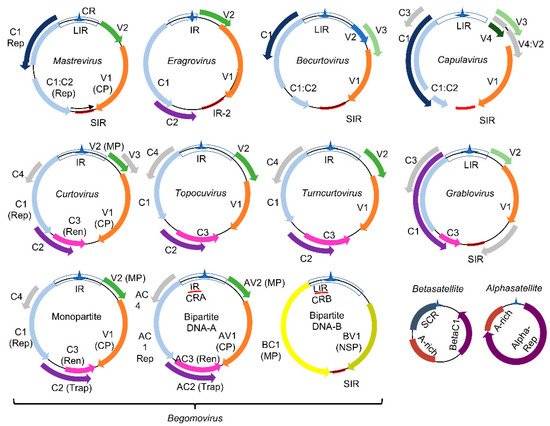 Figure 1. Genomic organization of geminiviruses (Geminiviridae family): The Geminiviridae family includes nine genera represented by monopartite or bipartite species. LIR denotes the long intergenic region, SIR, the short intergenic region, and CR, the common region. The viral proteins replication initiator protein, Rep (C1), and replication enhancer protein, Ren (C3), are associated with replication, and the transcription activator protein, Trap (C2), with the transcription of viral and host genes; AC4 is a virulence factor. The capsid protein (CP) is indicated in the monopartite and bipartite genomes. In monopartite species, V2 represents the movement protein (MP). In bipartite begomoviruses, MP (BC1) is encoded by the DNA-B that also encodes the nuclear shuttle protein, NSP (BV1), which facilitates the nucleocytoplasmic movement of viral DNA. Bipartite begomoviruses are often associated with DNA satellites: the alphasatellites, which encode a replication protein (Rep), and the betasatellites that encode the virulence-related βC1 protein. A-rich is a conserved adenine rich region of the DNA satellites, and SCR is the satellite conserved region. As with βC1, the encoded products of ORFs V1, V2, BV1, C2, C4, and AC3 from some geminivirus species are also reported as virulence factors. Adapted from [19].

Recent studies have demonstrated that plants deploy both levels of the classic innate immunity, PTI and ETI, to fight virus infection, and geminiviruses are not exception. Nevertheless, evidence for geminiviral PTI and ETI relies on the observations that geminivirus infection can induce and suppress PTI and ETI-like responses. In addition, some geminiviral proteins function as PTI suppressors, and at least one isolated resistance gene to TYLCV displays the classical NL-LRR configuration of intracellular R proteins that elicits ETI. However, our knowledge about geminiviral PTI and ETI mechanisms is still rudimentary, and several steps in PTI and ETI activation and response are unknown. For instance, we do not know the identity of geminiviral PAMPs that would induce PTI, and the cognate PRRs have not been identified. Furthermore, the repertoire of PTI geminiviral suppressors is restricted to C4 and perhaps to βC1 and NSP. The NSP-suppressed NIK1-mediated antiviral signaling has been shown to cross-communicate with bacterial PTI. In addition to suppressing global host translation, NIK1 activation leads to suppression of bacterial PTI, which restricts even further the use of sustained NIK1-mediated antiviral signaling to control virus infection. The isolation of geminiviral PAMPs and cognate PRRs, geminiviral effectors (Avr genes), and NL-LRR host targets will help to elucidate the mechanism of ETI activation and PTI suppression as the foundation for understanding the evolutionary pressure dynamics acting upon geminivirus and host interactions. This understanding will ultimately help to determine how to deploy the immune system to control geminivirus infection.