Osteoporosis is characterized by low bone mass and damage to the bone tissue’s microarchitecture, leading to increased fracture risk. Extracellular vesicles (EVs) are intercellular communicators, transfer substances encapsulated in them, modify the phenotype and function of target cells, mediate cell-cell communication, and, therefore, have critical applications in disease progression and clinical diagnosis and therapy.

Osteoporosis is an age-related bone disease characterized by reduced bone mass and bone microarchitecture destruction, resulting in decreased bone strength, increased bone fragility, and fracture risk [1]. Sustained stress can inhibit osteoblast activity and enhance osteoclast-mediated bone resorption, thus possibly leading to a decrease in bone mass in the long term [2]. However, cell-cell communications that exacerbate these processes are not well understood to date. In recent years, extracellular vesicles (EVs) have emerged as critical modulators of cell-cell communication in health and disease [3], and can regulate the function of osteoblasts and osteoclasts, and consequently have a potential impact on osteoporosis [4].

2. The Characteristics of Extracellular Vesicles

EVs is a general term for numerous vesicles with a lipid bilayer membrane structure released by cells into the extracellular environment [5]. Based on their subcellular origin and biogenesis, EVs divide into three main categories: small EVs (also known as exosomes), medium/large EVs (also known as microvesicles), and apoptotic bodies [6]. Exosomes are vesicles with a ≈40–200 nm diameter and uniform size, which are released from intracellular multivesicular bodies (MVBs) fused with the cytoplasmic membrane [7][8][9]. In contrast, microvesicles are non-uniform particles ranging from 200–2000 nm in diameter that are formed and released from the cytoplasmic membrane in a budding manner. Apoptotic cells undergo programmed cell death and release apoptotic bodies (800–5000 nm in diameter), which share certain characteristics with microvesicles [10]. EVs carry multiple biomolecules, including DNA, RNA, proteins, glycans, lipids, and metabolites [11][12]. Thus, they can be used as cargoes to deliver information and alter the signaling pathways and biochemical composition of receptor cells. EVs can be derived from a variety of cells, such as mesenchymal stem cells (MSCs) [13], immune cells [14], tumor cells [15], platelets [16], and cardiomyocytes [17]. Furthermore, they can be detected in most body fluids, such as peripheral blood, breast milk, semen, urine, and saliva [18]. Thus, EVs have been recognized increasingly as promising biomarkers for the diagnosis and prognosis of several diseases.

The composition of EVs has a crucial influence on their biological functions; as transmitters, EVs can activate cell surface receptor binding on target cells through proteins and bioactive lipid ligands, thereby inducing intracellular signaling and regulating the biological activity of the target cells. Besides, EVs can deliver their contents to target cells by fusing with the plasma membrane [4][19]. Figure 1 shows the biogenesis and secretion of EVs and their effects on target cells. Studies on EVs show that they have a complex composition, including lipids, proteins, nucleic acids, and other metabolites. These components play an essential role in the function of EVs. Nucleic acids carried by EVs can be potential biomarkers because of their genetic characteristics [20]. Current research is more focused on microRNA (miRNA, miR). MiRNAs are 17–24 nucleotide endogenous, non-coding RNAs, which post-transcriptionally silence target genes’ expression by binding to the 3’-untranslated region (UTR) open reading frame region of target messenger RNAs [21][22], thus playing a vital regulatory role in the organism. Because of the potential relevance of miRNAs as disease markers and therapeutic tools, it is of great importance to further our understanding of their biological properties and functions [23][24]. The roles of EVs in human tissues are listed in Table 1. 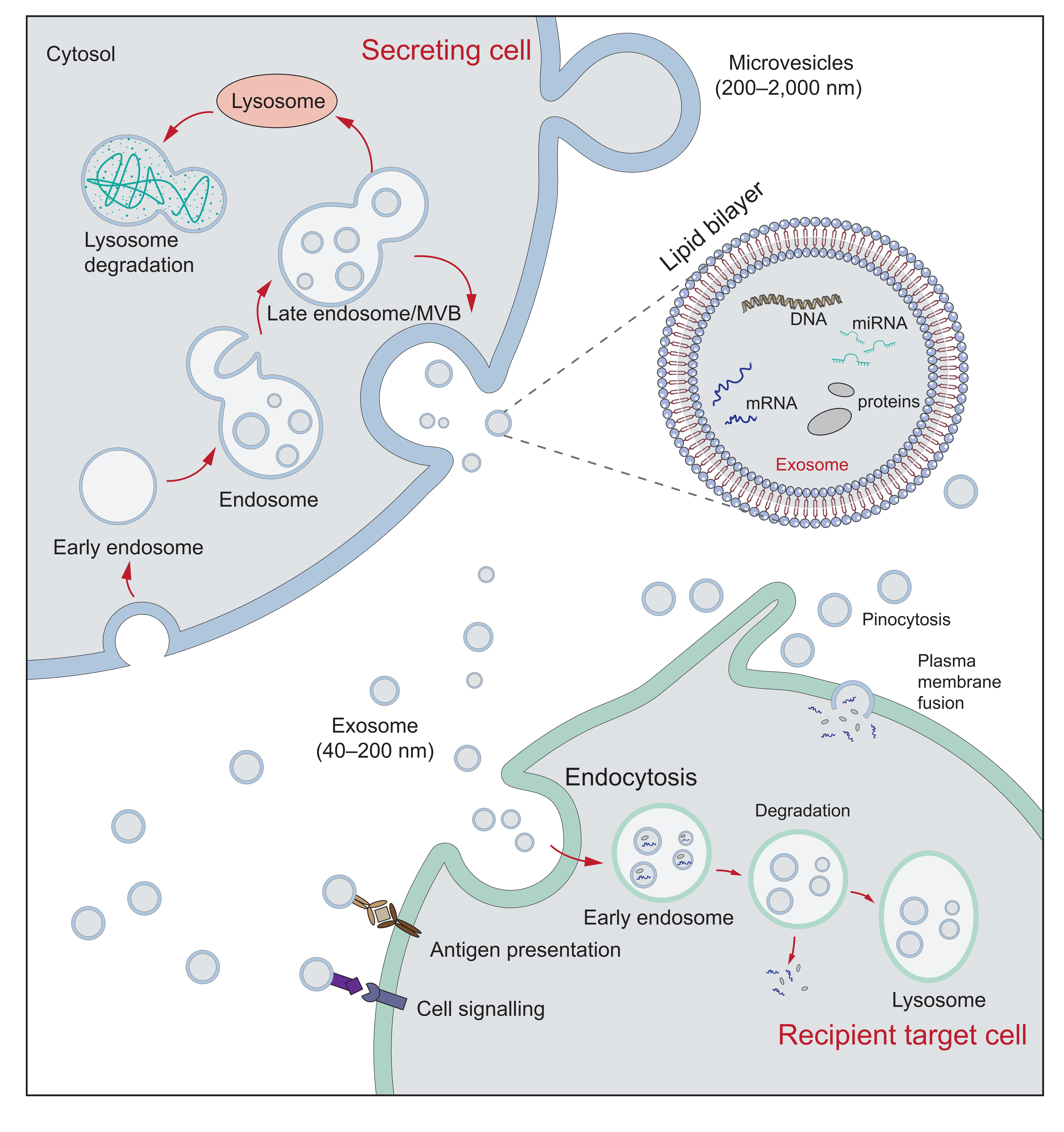 Figure 1. The biogenesis and secretion of EVs and their effects on target cells. The formation of exosomes begins with the endocytosis of the cell membrane. The endosome membrane sprouts inward to form vesicles, which transform into MVB. MVB can be sent to lysosomes for degradation or secreted into the exosomes (40–200 nm) by fusion with the plasma membrane. Microvesicles (200–2000 nm) are vesicles formed through a process of membrane budding or exocytosis. EVs can interact with target cells through receptor-mediated binding. Additionally, target cells can internalize EVs by target cells through endocytosis, pinocytosis, and plasma membrane fusion [25], where EVs can release their cargoes to affect target cells, or be degraded by lysosomes.

3. The Role of EVs in Osteoporosis

3.1. Overview of Osteoporosis and Bone Remodeling

As one of the human body’s essential tissues, bone needs sufficient stiffness and toughness to maintain bone strength to avoid fractures. In terms of the body’s natural processes, the positive balance between bone formation (by osteoblasts) and bone resorption (by osteoclasts) before adulthood increases bone mass and reaches its peak (typically achieved at different skeletal sites from 25 to 35 age years [39]), and bone remodeling balance maintains bone mass in adulthood. However, with increasing age, most bone loss occurs during and after menopause.

Bone remodeling, a lifelong process, refers to bone formation (form new bone tissue) and bone resorption (remove mature bone from the skeleton). This process involves skeletal-related cells, such as osteoclasts, osteoblasts, osteocytes, and several immune cells, such as T cells, B cells, and megakaryocytes [40]. Bone remodeling occurs in the basic multicellular unit, consisting of osteoblasts, osteoclasts, and osteocytes within the bone-remodeling cavities [41]. The process begins with bone-resorbing osteoclasts, followed by bone-forming osteoblasts, and in normal bone, the remodeling cycle results in complete filling of the resorption cavity with new bone [41][42]. Osteocytes, the most abundant cells in bone tissues, can sense and respond to environmental mechanical stimuli and regulate bone formation and bone resorption [43]. Thus, osteocytes are the central coordinator of bone reconstruction and mineral homeostasis. In the bone remodeling process, runt-related transcription factor 2 (Runx2) and Osterix plays an essential role for osteoblast differentiation [44][45], and the osteoclast differentiation is mainly regulated by the receptor activator of nuclear factor κ-Β ligand (RANKL)/receptor activator of nuclear factor κ-Β(RANK)/osteoprotegerin pathway. Namely, osteoblasts can produce RANKL, which can bind to RANK on osteoclasts’ precursor, thus promoting osteoclast differentiation. To tightly regulate osteoclastogenesis, osteoblasts also secrete osteoprotegerin to compete with RANK to bind RANKL, thus inhibiting osteoclast differentiation [46].

MiRNAs, as one of the cargoes carried by EVs, have a vital role in bone homeostasis. For example, the highly expressed miR-503-3p in EVs released by osteoblasts can inhibit osteoclastogenesis by inactivating the RANK/RANKL signaling pathway [47][48]. Besides, blood vessels play an essential role in bone repair and regeneration [49]. A study by Song et al. [50] demonstrated that EVs derived from the vascular endothelial cell have more effective bone targeting than those derived from osteoblast or bone marrow mesenchymal stem cells (BMSCs) and can inhibit the activity and differentiation of osteoclasts through miR-155. Thus, the miR-155-containing EVs may be a potential target against osteoporosis. Interestingly, some tumor cells can affect osteoclast function by secreting EVs. Increased expression of miR-21 was observed in EVs derived from lung adenocarcinoma cells, which promoted osteoclastogenesis by targeting programmed cell death protein 4 [51]. Similarly, breast cancer cells secrete miR-20a-5p-containing EVs, which promote the proliferation and differentiation of osteoclasts [52].

EVs can affect bone remodeling by directly regulating osteoclast differentiation and activity. Huynh et al. [53] found that the EVs derived from osteoclast precursors stimulate the formation of vitamin D-dependent osteoclasts. However, EVs from osteoclast-enriched cultures inhibited osteoclastogenesis. The results of this experimental study show that the EVs from mature osteoclasts contain RANK, which could competitively inhibit the stimulation of RANK on the osteoclast surface, similar to the role of osteoprotegerin mentioned above. Besides, the RANK-containing EVs can use the RANK/RANKL interaction to target RANKL-expressing cells to transfer regulatory molecules [53]. Moreover, osteoblasts can affect osteoclasts by secreting EVs. The RANKL-containing EVs released by osteoblasts are transferred to the precursors of osteoclasts, thus stimulating RANKL/RANK signal transduction and promoting the formation of osteoclasts [54]. To better understand the role of EVs in osteoblast-osteoclast communication, researchers loaded osteoblast-derived EVs with osteoclast-inhibiting drugs (zoledronate and dasatinib). They found that osteoblast EVs internalized and shuttled osteoclast-inhibiting drugs to inhibit osteoclasts’ activity in vivo and in vitro [55], which opens up an avenue for the use of EVs in the treatment of bone diseases. The above studies show that EVs from a variety of cells can regulate osteoclasts.

Osteoblasts are the bone-forming cells of remodeling units and are crucial for skeletal growth and maintenance [56]. As mentioned above, osteoblasts can secrete EVs to influence osteoclast function. In turn, osteoclasts can secrete EVs that modulate osteoblast activity. Sun et al. [57] found that osteoclasts secrete miR-214-containing EVs, specifically recognizing osteoblasts through the ephrina2/ephrin type-A receptor 2 interaction. Moreover, miR-214 directly targets activating transcription factor 4 to inhibit bone formation [58]. The osteoclast-derived EVs exist not only in the bone microenvironment but they can also enter the blood. Researchers found upregulated levels of miR-214 in serum EVs of osteoporotic patients, which means that miR-214 in EVs serve as a potential biomarker of bone loss [57]. Likewise, osteoclasts-derived miR-23a-5p-containing EVs inhibit the activity of osteoblasts by targeting Runx2 [59]. Therefore, the EV-mediated intercellular communication between osteoblasts and osteoclasts may be a new direction for the study of bone remodeling mechanisms.

Table 2. A summary of EVs associated with bone remodeling.