Oxygen availability varies throughout the human body in health and disease. Under physiological conditions, oxygen availability drops from the lungs over the blood stream towards the different tissues into the cells and the mitochondrial cavities leading to physiological low oxygen conditions or physiological hypoxia in all organs including primary lymphoid organs. Moreover, immune cells travel throughout the body searching for damaged cells and foreign antigens facing a variety of oxygen levels.

Immune cells and proper immune response require focal sites of immune cell development, maturation, activation, tolerance, and longevity also defined as immunological niches bearing a certain microenvironment to maintain immune homeostasis [1]. These organs and tissues include the bone marrow, placenta, intestinal mucosa, renal medulla, secondary lymphoid organs, and the thymus [2][3]. In tissue pathology, sites of high immunological activity lead to inflammation and as a result tissue dysfunction bearing certain pathological microenvironment features. These pathological sites include infected, inflamed, and ischemic tissues and tumors [4][5][6][7]. Of note, sites of immune activity with distinct microenvironmental entities can broadly range between a state of immune homeostasis and a state of immune pathology. Under certain conditions of severe and disorganized immune activity, inflammation can perpetuate as a result of immune dysfunction leading to autoimmunity or culminates into inflammation-driven tumor development [8]. Microenvironmental conditions at sites of physiological and pathological immune activity play a key role in the development of effective immune response and pathological immune dysfunction by modulation of immune cell function. Understanding the impact of the microenvironment in sites of immune activity and adaptation mechanisms in immune cell reprogramming may yield into new therapeutic treatment strategies against a dysfunctional immune response as found in autoimmunity and cancer. At sites of immune activity under physiological and pathophysiological circumstances, immune cells become highly metabolically active and activate bystander cells and surrounding tissue. As a result, microenvironmental features rapidly change by increasing the amount and number of humoral factors, metabolites and a decrease in oxygen leading to a state of hypoxia—a condition where cellular oxygen demand exceeds the oxygen supply [9][10]. Constant supply of oxygen is a prerequisite for the energy homeostasis of respiring cells. Oxygen plays a vital role in all eukaryotes, being the terminal electron acceptor of the mitochondrial electron transport chain, which finally feeds the proton gradient for the generation of ATP via oxidative phosphorylation. If the constant supply with oxygen does not anymore meet the requirements of cells, hypoxic conditions will be established and, if sustained, these conditions will ultimately result in cell death. Hypoxia arises in a variety of immunological situations under physiological and pathophysiological immune activity [10][11].

Fundamental principle of the vasculature is to supply all organs, tissues and cells with oxygen and nutrients according to their needs and to dispose of refuse (carbon dioxide and metabolic products) establishing a balance between supply and consumption which is unique for the respective organ, tissue and cell. With regard to oxygen, its availability to the cells in the human body depends on various factors, such as (i) oxygen uptake, (ii) the transport capacity of the blood, (iii) the transport of the oxygen carrier, i.e., vascularization, and finally (iv) cell respiration itself. 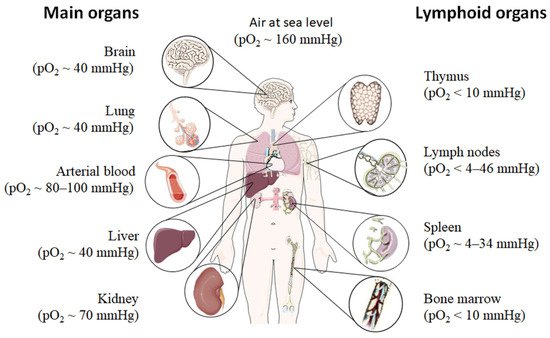 Low pO2 have been detected in various compartments of healthy and inflamed tissues as well as in tumors, often as a characteristic of tissue architecture, vascularization and microenvironment [1]. Tissues and cells vary in their (i) circulatory distance from lung oxygenation (ii) density, functionality and relative proximity of/to their capillary network (iii) oxygen consuming microenvironmental, (iv) the rate of oxygen consumption within the cells and thus in pO2 leading to distinct thresholds and susceptibilities to hypoxia [12][14][15]. However, at a cellular level, hypoxia and hypoxic responses generally occur at a pO2 ~7–10 mmHg (~1% O2 air-content) [17].

Although most tissues of the body are provided with a level of oxygen that exceeds the basal metabolic requirements, in some tissues, the pO2 is comparatively low, which results in regions of “physiological hypoxia” [1]. Such regions can occur in the intestinal outermost mucosal surface where a controlled oxygen gradient establishes as a result of anatomical features such as juxtapositioning of the mucosal surface to the anoxic gut lumen and the functional countercurrent oxygen exchange system in the intestinal villi [18]. In kidney, oxygen gradients are necessary for organ function which is to maximize the concentration of urine by counter-current exchange of oxygen in the renal medulla [13][19]. Moreover, oxygen gradients are important for the synthesis of erythropoietin (EPO) in kidney and liver [20]. In the developmental process of the placenta and the fetus, physiological hypoxia can be observed in several regions due to constant outgrowing of the existing local blood supply [21]. If blood supply is limited due to the lack of vasculature such as found in the eye’s retina but also in the outer layer of the skin, the epidermis, ‘physiological hypoxia’ has been demonstrated to be well established [21][22]. Moreover, the major organs of the immune system, including bone marrow (pO2 < 10 mmHg) [23][24], thymus (pO2 < 10 mmHg) [24][25][26], spleen (pO2 ~ 4–34 mmHg) [26][27], and lymph nodes (pO2 < 4–46 mmHg) [28], exhibit regions of immune activity with locally significantly lower pO2 than surrounding tissues and even lower than inhaled air. These hypoxic regions are of functional importance because they impact immunity by providing a niche for hematopoietic stem cells (HSCs) in the bone marrow, where hypoxia maintains the self-renewal capacity of HSCs favors a slow turnover of HSCs and sustains survival by promoting their quiescence [29][30][31][32] or an environment for the antigen challenging of B cells in germinal centers (GCs), where hypoxia increase glycolytic metabolism supporting the generation and expansion of antigen-specific GC B cells and the production of high-affinity immunoglobulin G (IgG) antibodies [33][34]. 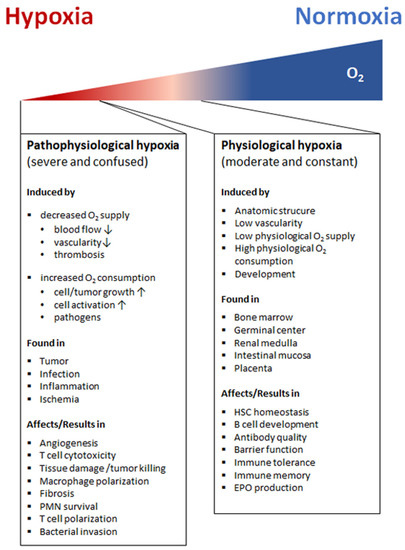 Apart from the hypoxic tumor sites, hypoxic areas may appear as a consequence of infection with pathogenic bacteria, viruses, fungi, and protozoa [47][48][49][50]. Many factors contribute to the establishment of an hypoxic environment including an increased oxygen consumption by inflamed resident cells, infiltrating immune cells and pathogens as well as a decreased oxygen supply caused by the combination of vascular pathology and microthrombosis [51]. In this scenario, the hypoxic microenvironment protects the host by decreasing host cell death and reducing pathogenicity of invaders, while deleterious effects such as increases in antibiotic resistance and bacterial invasion make hypoxia a double-edged sword [52][53][54].

However, sites of inflammation undergo significant shifts in metabolic activity leading to O2 deficiency, which is defined as “inflammatory hypoxia” [35][55]. The reasons for this kind of hypoxia include the increase in oxygen consumption by infiltration and transmigration of immune cells such as monocytes and polymorphonuclear neutrophils (PMN), by local T and B cell proliferation, by activation of oxygenase, such as oxidases, monooxygenases and dioxygenases, and the immunometabolic switch in effector cells itself. The influence of inflammatory hypoxia on the severity of inflammation is particularly tissue-specific and depends on the composition and distribution of the involved cell types, the local microenvironment, the duration and severity of hypoxia [56].The induction of hypoxia by tissue infiltrating PMNs for instance in the intestinal epithelia ameliorates colitis [56], while in the lung enhances the severity of lung injury [57].

Blocking the blood supplying vessels by thrombus, embolus, or other blockages and followed by the subsequent restoration of perfusion and concomitant reoxygenation leads to ischemia and reperfusion injuring the demanding tissue [58]. Ischemia and reperfusion often occur in small capillaries of cerebral, coronary, or peripheral arteries [59] and is one of the leading causes of morbidity and mortality. Imbalance of oxygen supply and demand during ischemia and reperfusion leads to tissue hypoxia and immune cell attraction, which trigger inflammation and result in the tissue damage in ischemic disease [60][61].