Bioactive phytochemicals, including natural compounds, secondary metabolites and their derivatives, have attracted significant attention for use in both medicinal products and cosmetic products. Our review highlights the pharmacological mode-of-action and current biomedical applications of key bioactive compounds applied as anti-inflammatory, bactericidal with antibiotics effects, and pain relief purposes in controlled clinical studies or preclinical studies.

Salt-tolerant plant species, also called halophytes, belong to many botanical families. Halophytes are defined as plants that can grow and complete their life-cycle in a salt concentration of at least 200 mM NaCl [1]. They do not form a systematical group and, phylogenetically, they are not related to each other. Through evolution, they have adapted to saline conditions in several ways: morphologically, physiologically, and biochemically. Hence, halophyte species are found to produce high levels of bioactive compounds and free radical-scavenging secondary metabolites, potentially due to their adaptation to harsh environmental conditions. High salinity during growth and development also increases the level of free radicals in plants [2][3]. Such potential beneficial dietary factors in small doses and complex combinations (e.g., polyphenols, fibers, polyunsaturated fatty acids, etc.) for lifestyle changes can lead to reduced inflammation and improved health; however, metabolic disturbances are key contributors to disease progression [4]. Screening and testing of extracts from medicinal plants species, including halophytes, against a variety of pharmacological targets and disease conditions in order to benefit from the immense natural chemical diversity is a research focus in many laboratories and companies worldwide [5][6]. For halophytes, the relevant compound classes are a combination of components typical of lignocellulosic biomass and components unique for a family or species (Figure 1). The majority of the free radical-scavenging phenolic compounds are biosynthesized through the shikimic acid, acetic acid, and phenylpropanoid pathways, resulting in phenylpropanoids, simple phenols, and phenolics, respectively [7][8]. 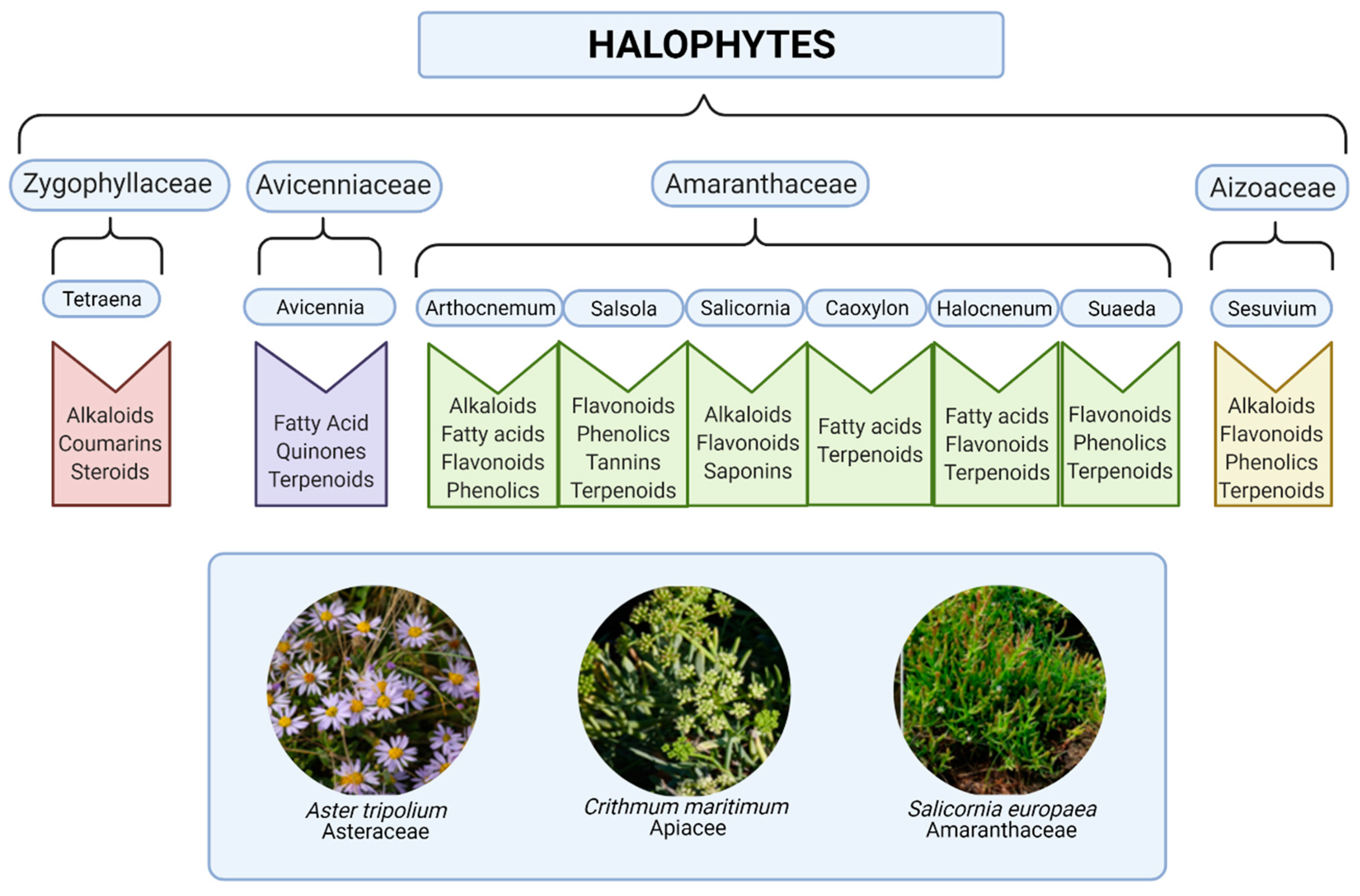 Figure 1. Phytochemical composition of some common coastal halophytes. Created with BioRender.com. (Pictures reproduced with permission [9]).
Over time, nature has been a rich source for various natural bioactive substances that have many applications in folk medicine and ethnopharmaceuticals [10][11][12]. For thousands of years, plants were the only source of medicine due to the absence of other compounds available, and they were used for a broad spectrum of medical purposes as therapies based on their contents of secondary metabolites and their bioactive properties [13].
The biological qualities of the three halophytic plants species Aster tripolium (Jacq.) Dobrocz., Crithmum maritimum L., and Salicornia europaea agg. can overall be divided into anti-inflammatory, antioxidant-rich and antibacterial activities, and future use in medicinal practice. The bioactive compounds are listed in Table 1. The chemical structure and biological activities of secondary metabolites isolated from Salicornia europaea L. have recently been reviewed [14].
Table 1. Anti-inflammatory and antibacterial activities of several halophytes based on their bioactive compounds.

2. Nutraceutical and Pharmacological Mode-of-Action of Key Secondary Metabolites in Halophytes

Wild edible plants (WEPs) are considered as promising sources of essential compounds, needed not only in the human diet including carbohydrates, proteins, and lipids, but also of other minor compounds such as phenols, vitamins, or carotenoids [29]. The presence of phenolic compounds in these vegetal matrices is supposed to provide a prophylactic effect against further pathogenesis and disorders related to aging or oxidative stresses. The utilization and valorization of phytochemicals have focused on nutraceutical use. Hence, the modes-of-action, pharmacological attributes, and medicinal properties target multiple common therapeutic areas, such as neuroprotective, antioxidant, analgesic, immunomodulatory, antimicrobial, antidiabetic and cardioprotective activities (Figure 2) [30]. Neuroprotection is attributed to high levels of antioxidants, including tungmadic acid, quercetin, and chlorogenic acid, enabling the scavenging of reactive oxygen species (ROS), e.g., H2O2, efficiently. These electrophilic compounds exert antioxidant activity as well as induce antioxidant enzymes through the Nrf2 signaling pathway, thereby exerting protective effects against ROS-induced neuronal cell damage [31]. Nrf2 regulation contributes to anti-inflammatory processes by orchestrating the recruitment of inflammatory cells, thus regulating gene expression through the antioxidant response element (ARE) [32]. NRF2 activation provides cytoprotection against numerous pathologies including chronic diseases of the lung and liver, autoimmune, neurodegenerative and metabolic disorders, and cancer initiation [33]. However, unidentified compounds may be co-responsible for the neuroprotective effect [34]. Linked to neuroprotection and ROS scavenging then HCAs and their derivatives also display antioxidant, anti-collagenase, anti-inflammatory, antimicrobial and anti-tyrosinase activities, as well as ultraviolet (UV) protective effects. This suggests that HCAs can be exploited as anti-aging and anti-inflammatory agents, preservatives and hyperpigmentation-correcting ingredients [35]. Recent findings suggest that the reversal of UVB-induced damages to skin may be prevented by the protecting effects of aqueous extracts of S. europaea affecting basal keratinocytes [36]. 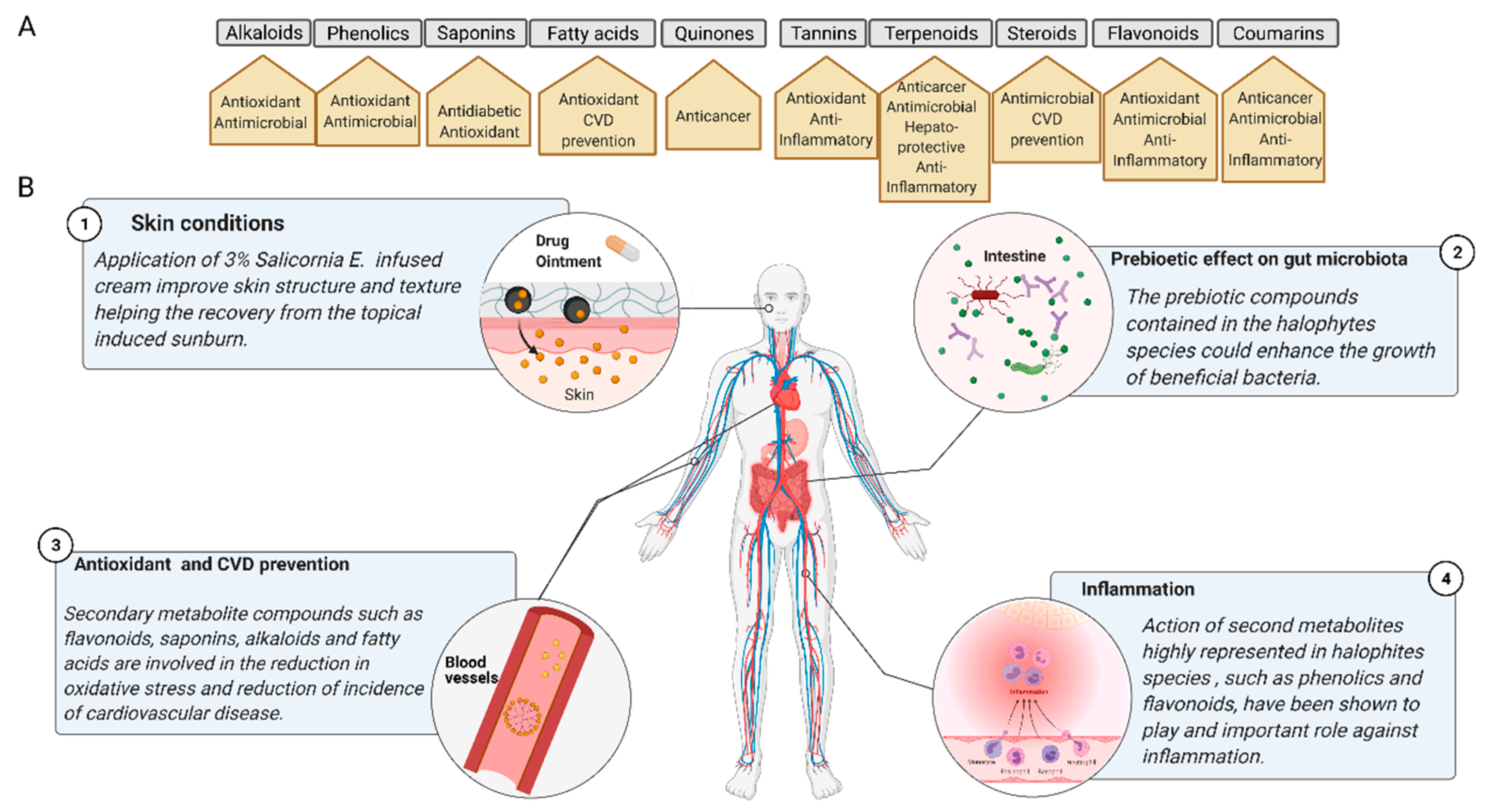 Figure 2. (A) Principal physiological processes that involve the action of secondary metabolites present in halophytic species. CVD, cardiovascular disease. (B) Main biomedical mechanisms of secondary metabolites’ activities of halophytes. Created with BioRender.com.
The involvement of A. tripolium, C. maritimum, and S. europaea bioactive extracts in pain and itch mechanisms remains scarce, although several studies have been conducted, in vitro and in vivo, in order to demonstrate the effects of secondary metabolites present in the three species in relation to nociception and analgesia [37][38][39][40][41][42]. In a previous study, the authors looked at the analgesic action of chlorogenic acid (5-caffeoylquinic acid, CGA) in animal neuropathic pain models. CGA is a polyphenol formed by the esterification of caffeic and quinic acid, which can be found in plants, vegetables, and fruits [43], showing antioxidant, anti-inflammatory, antigenotoxic, anticancer, and cytostatic activities [37][44]. Dos Santos and colleagues [31] investigated the effect of pure CGA in the formalin-induced pain test, where CGA was reported to possess antinociceptive activity in neuropathic pain models, drastically reducing the pain behavior of mice after the injection of formalin [37]. Neuropathic pain could arise from tissue damage, inflammation, or injury to the nervous system, and is characterized by three sensory abnormalities which include increased sensitivity to painful stimuli (hyperalgesia), perception of innocuous stimuli as painful (allodynia), and spontaneous pain [38]. In this direction, another study showed the antinociceptive action of CGA in the neuropathic pain rat model [39]. The authors showed that the administration of CGA produces significant dose- and time-dependent anti-hyperalgesic effects in chronic constrictive nerve injury (CCI) rat models, and that a chronic treatment for 14 days reduces mechanical hyperalgesia in rats, suggesting action of the CGA on the inhibition of reactive oxygen species (ROS) [39]. Moreover, another study demonstrated that the administration of CGA systemically or intrathecally improves mechanical and cold hyperalgesia in rat neuropathic pain models [42]. In 2014, Qu et al. [35] suggested that the usage of CGA may exert analgesic action by modulating acid-sensing ion channels (ASICS) in rat dorsal root ganglion neurons [41]. The effect of plant extracts and secondary metabolites on itch or skin diseases is a topic that needs to be further evaluated, although a recent study looking into the effect of the prolonged application of S. europaea-based cream on sunburned skin of women showed that eight weeks of treatment can improve skin structure and texture, helping the recovery from topical induced sunburn [36].

Conclusively, a number of halophyte species can be used in many applications such as functional food, functional feed, cosmetic products, and finally, as bioactive pharmaceutical compounds. Their properties emphasize their potential for use as medicinal agents such as antibiotics or prebiotics. The massive use of antibiotic treatment has resulted in increased antibiotic resistance, which is one of the most critical treatment problems worldwide. Therefore, there is a growing request for new antimicrobial drugs. Due to the situation, natural derivates and biologically active compounds isolated from plants can be beneficial resources for such new drugs. Halophytic plants are an obvious resource because several studies have proved their antimicrobial effectiveness. Due to the multiple positive effects on health aspects such as antibiotic resistance, regulation of the inflammatory response, and pain analgesia, it increases the need to further investigate the mechanisms and pathways in which these plant species and their secondary metabolites are involved.