Dietary plant polyphenols are natural bioactive compounds that are increasingly attracting the attention of food scientists and nutritionists because of their nutraceutical properties.

Recent progress in nutrition and medicine has metamorphosed the way healthcare is conceived and delivered. An international technology-driven revolution is driving this rapid change from traditional healthcare to precision medicine by establishing unprecedented research programs and networks that prioritize diseases’ prevention and health promotion mainly through lifestyle and diet-based approaches [1]. A recent emerging area of precision nutrition focusing on bioavailable and metabolizable proportions of ingested foods with claimed health benefits has been developed. In this context, plant-derived polyphenols have been associated with several health benefits and are considered bioactive dietary compounds [2]. Polyphenols are the largest group of dietary antioxidants known for their ability to scavenge free radicals, donate hydrogen atoms, electrons, or chelate metal cations [3]. Because of these mechanisms, they have protective and preventive effects against several non-communicable diseases (NCDs), including cardiovascular diseases (CVDs), cancer, and diabetes [4].
However, the health implications of dietary polyphenols are determined by their bioavailability to a great extent, which is defined as the fraction of polyphenols released from the food matrix, metabolized, absorbed, and able to impose its bioactivity on the target cells or tissues [5]. Several factors influence polyphenol bioavailability, including the initial content in foods, food matrix, gut microbiota, and food processing [6]. In fact, most fruits and vegetables are not usually consumed raw. Instead, they go through industrial or domestic processing steps (e.g., cooling, heating, drying, fermentation, etc.) that affect their content, bioaccessibility, and bioavailability.
The main purpose of food-processing techniques is to transform raw ingredients into food, or to transform food into other end-products suitable for human or animal consumption. Some specific objectives include extending the shelf life of ingredients and products by inactivating pathogens or contaminating microorganisms, enhancing the bioavailability of otherwise inaccessible nutrients, enabling variety in flavor, texture, or aroma of certain foods, and improving the nutrient profile [7]. Domestic and industrial processing affect phenolic compounds’ content, antioxidant capacity, bioaccessibility, and bioavailability in different ways. While many food-processing techniques may lead to phenolic compounds’ degradation, some others enhance their absorption and bioavailability [8][9]. The ⁠final polyphenol content and bioavailability in processed food depend, therefore, on factors such as the nature of the process, duration of treatment, and food matrix subjected to the processing technique [10].
Since dietary polyphenol consumption has been increasingly proposed as an effective measure in the primary prevention and management of NCDs, it is imperative to consider the effect of food processing on their content and bioavailability. This review aims to summarize the effects of the most common food-processing techniques, either domestic or industrial, on dietary polyphenol content, bioaccessibility, and bioavailability. To introduce the topic, a glance at polyphenol types, sources, health implications, and the concepts of bioavailability and bioaccessibility is provided.

The largest antioxidant group present in the human diet is that of phenolic compounds, with more than 8000 different structures identified to date [11]. Plants produce these secondary metabolites in response to ultraviolet light or pathogen attacks [12]. The molecular structure is based on one or several aromatic rings and at least one hydroxyl (phenol) group. They can either have a simple structure (such as in the case of phenolic acids) or a complex structure (such as in the case of flavonoids).
Based on their molecular structure, phenolics are divided into five main groups: phenolic acids, flavonoids, stilbenes, coumarins, and tannins [9]. As phenolic acids and flavonoids were mostly investigated in studies reporting the association between food processing and polyphenol content and bioavailability, these two classes are discussed in greater detail.

Phenolic acids are non-flavonoid polyphenols, and their typical representatives are hydroxybenzoic acids (e.g., gallic, p-hydroxybenzoic, vanillic, and syringic acids) and hydroxycinnamic acids (e.g., ferulic, caffeic, p-coumaric, chlorogenic, and sinapic acids). They exist in bound or free form in fruits and vegetables. Grains and seeds are particularly rich in bound phenolic acids, which are released after acid or alkaline hydrolysis or enzymatic reactions [11]. Good sources of phenolic acids are fruits (apples, cherries, berries, and their products, such as wine), vegetables (broccoli, lettuce, and tomatoes), legumes, cereals, and coffee beans [13].

Flavonoids are a large group of polyphenols that typically contain two aromatic rings linked by a heterocycle. Their subclasses are distinguished by structural differences based on this heterocycle [14]. These subgroups include anthocyanins, flavan-3-ols, flavones, flavanones, and flavonols [11].
Flavones, flavonols, and flavanones are widely distributed in plants. Flavones and their derivatives flavonols, as well as their acylated products, represent the largest polyphenol subgroup [15]. Quercetin and kaempferol are, for example, the most commonly found flavonol aglycones, and they alone have approximately 300 different glycosidic combinations [15]. The most relevant flavone sources are citrus fruits, parsley, lettuce, and grapes, while flavanones are mostly present in citruses and products based on them [13]. Among all flavanones, hesperidin and naringenin are typical representatives. Good dietary sources of flavonols include plums, apples, onions, and blueberries, with kaempferol and quercetin being the main representatives [13].
Flavanols are a very complex group of polyphenols, which include compounds ranging from monomeric flavan-3-ols to polymeric proanthocyanidins. Proanthocyanidins are the precursors of anthocyanidins, which are produced under acidic conditions as a result of polymeric chain cleavage [11]. The most commonly identified monomeric flavanols in dietary sources are catechin, epi(gallo)catechin, and their gallates [13]. Catechins are mainly present in tea, grapes, red wine, cocoa, and chocolate [13].
Anthocyanidins are compounds responsible for the red, blue, and purple pigments in fruits and vegetables, flower petals, and some grain varieties, such as black rice. As they are mainly present as glycosides, they are commonly referred to as anthocyanins. Among the 31 currently known anthocyanidins, the most frequently identified in plants are cyanidin, delphinidin, and pelargonidin [16]. In fact, 90% of the structure of anthocyanins is based on these compounds and their derivatives [16]. Several factors influence the color of anthocyanins, such as pH and degree of hydroxylation. Depending on these factors, these phenolic compounds can either give blue, red, or purple colors to plants [11]. A wide range of plant-based foods are good sources of these phenolics, with grapes, red wine, berries, and some vegetables being typical representatives [13].
These diverse polyphenol sources and types discussed above are valuable, and therefore it is worth investigating their bioavailability and health benefits in light of the scientific literature available so far.

Oxidative stress and inflammation are common pathways that drive the progression of many NCDs. As polyphenols impair these processes [17], incorporating higher doses of these compounds into the human diet may be a suitable tool for primary prevention, lowering the incidence and delaying the onset of several chronic diseases, including cardiovascular diseases, cancer, obesity, and neurological disorders (Figure 1). 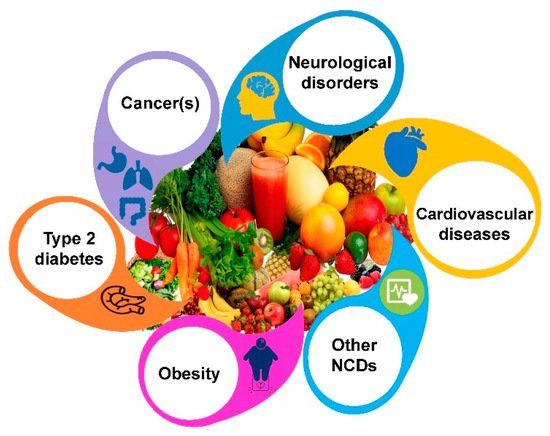 3.1. Polyphenols Consumption and Their Effects on Obesity

Animal, in vitro, and human studies have shown that dietary anti-inflammatory and antioxidative compounds may increase thermogenesis and energy expenditure, and decrease inflammation and oxidative stress, thereby facilitating weight loss and/or reducing the rate of metabolic conditions [18]. Some polyphenols with anti-obesity properties are tea catechins, specifically epigallocatechin-gallate (EGCG). In vitro studies on isolated EGCG or green tea extracts have reported their potential to inhibit preadipocyte differentiation, decrease adipocyte proliferation, and induce apoptosis. They also suppress lipogenesis and promote lipolysis and beta-oxidation processes [19]. A preclinical animal study has reported that EGCG and green tea extract facilitate weight loss by lowering adipose mass in mice fed a high-fat diet [20]. Other polyphenols with anti-obesity properties include anthocyanins, compounds with great antioxidant [21] and anti-inflammatory potential [22]. Few human clinical trials have assessed the obesity-related effects of anthocyanin-rich foods; however, the available data suggest that black soybean and red orange juice may effectively reduce markers of inflammation and metabolic disease in overweight people [23][24].

3.2. Polyphenols Consumption and Their Effects on Cardiovascular Diseases

Oxidative stress has been linked to endothelial dysfunction, which triggers the onset of early atherosclerosis and CVD. Thus, strategies that aim to reduce oxidative stress and inflammation may be promising to combat CVD-related disorders. In addition, polyphenols can increase NO synthase activity [25], which in turn positively affects flow-mediated dilatation (FMD). Human trial data suggest that oligomeric proanthocyanidins are an efficient dietary intervention for improving plasma lipid profiles and anti-atherogenic components of plasma, as observed in 70 hyperlipidemic subjects [26]. A 6-week supplementation with 162 mg of onion peel quercetin per day was reported to improve hypertensive patients’ systolic blood pressure [27]. However, a daily dose of 100 mg quercetin for 12 weeks did not affect blood pressure in 72 healthy overweight and obese subjects, whereas it positively affected endothelial function measured as FMD and circulating endothelial progenitor cell counts [28]. When the findings from randomized controlled trials (RCTs) of polyphenol supplementation were meta-analyzed, it was concluded that polyphenols could exert beneficial effects on LDL-c, HDL-c, FMD, and both systolic and diastolic pressure, thus supporting their implications in primary CVD prevention [29].

3.3. Polyphenols Consumption and Their Effects on Type 2 Diabetes (T2D)

Polyphenols and polyphenol-rich products can also ameliorate the risk of T2D. Polyphenols are involved in attenuating postprandial glycemic responses, fasting hyperglycemia, and improving insulin secretion and sensitivity. These implications might be explained by their ability to inhibit the digestion of carbohydrates and intestinal glucose absorption, stimulate insulin secretion, modulate the liver-related release of glucose, and trigger both gene expression and cell signaling pathways [30]. Many studies have investigated the efficacy of polyphenol supplementation at the onset of T2D. One meta-analysis of observational studies found that a diet rich in polyphenols (specifically flavonoids) may serve as a tool to prevent the onset of T2D [31]. Regarding specific food groups, tea consumption was reported to be inversely associated with the onset of T2D. A dose–response meta-analysis of cohort studies suggests that consuming 4–6 cups of tea per day may decrease T2D risk by up to 15% [32]. Other polyphenol-rich food groups linked with a reduced risk of T2D include fruits, specifically berries and yellow vegetables [33][34].

3.4. Polyphenols’ Consumption and Their Effects on Cancer

Polyphenol supplementation can hamper cancer progression, probably because of their involvement in cancer cell apoptosis. They were also shown to modulate cell cycle signaling and promote cell defense systems [35]. Epidemiological studies have shown that dietary polyphenol intake is linked with lower cancer incidence. For example, one Canadian case-control study observed that high dietary flavonoid consumption could reduce lung cancer occurrence [36], while a Korean study confirmed a similar relationship with gastric cancer [37]. Clinical trials also support the notion that polyphenol compounds may exert beneficial effects on disease progression [38][39]. A meta-analysis of 165 prospective and case-control studies did not confirm the association between total flavonoid intake and cancer risk. However, the subgroup analysis confirmed that a higher intake of some flavonoid classes could lower the risk of some cancers, specifically colon, lung, and stomach ulcers [40].

3.5. Polyphenols’ Consumption and Their Effects on Neurological Disorders

Finally, the antioxidant properties of polyphenols are important for improving brain health and function. By scavenging free radicals, they facilitate the reduction of brain cell damage [41]. Using animal models with neurocognitive dysfunction, it has been observed that physiological doses of flavonoids may reduce the accumulation of neuropathological proteins and improve synaptic plasticity [41]. Observational studies and RCTs suggest that dietary polyphenols, such as those present in berries, grapes, cocoa, and green tea, may modulate processes related to cognitive health [42]. It was also reported that resveratrol supplementation could enhance both cerebrovascular function and cognition in postmenopausal women, implying that this polyphenol’s presence in the diet may improve cognitive function in this specific population [43]. A meta-analysis study found that polyphenol consumption (that is, those present in Ginkgo biloba, resveratrol, and soy isoflavones) did not significantly affect the scores reflecting global cognitive functions; however, they improved those scores related to verbal learning, memory, and executive functions, while not affecting attention-related scores [29].