Cartilage conduction (CC) is a form of conduction that allows a relatively loud sound to be audible when a transducer is placed on the aural cartilage. The CC transmission mechanism has gradually been elucidated, allowing for the development of CC hearing aids (CC-HAs), which are clinically available in Japan. However, CC is still not fully understood.

The sound transmission pathway to the cochlea is generally classified into air and bone conduction (AC and BC). For AC, sound generated outside the ear travels to the eardrum through the ear canal and is transduced into vibrations of the ossicles to reach the cochlea. For BC, skull bone vibrations induced by a transducer are transmitted to the cochlea, involving at least five components [1,2,3]. Sound can also be perceived by body part vibrations other than the skull bone [4,5,6], and the transmission mechanisms are unique from one another. When the transducer is placed on the aural cartilage, particularly on the tragus, a relatively loud sound is audible [7]. This form of conduction is referred to as cartilage conduction (CC) [8]. Generally, hearing through non-osseous soft tissue conduction is not as clear as conventional BC. However, a clear sound is audible in CC, and it is perceived louder than when a transducer is placed on the mastoid or forehead [9].

The hypothesized CC mechanism is different from AC and BC [1][2]. For a vibration speaker, the sound signal increases by a movable plate, and the amplified signal is transmitted via AC. For CC, the vibration of the cartilaginous portion of the ear canal induced by a transducer generates sound in the ear canal. In this transduction, the cartilaginous portion of the ear canal functions like the movable plate of a vibration speaker, and thus the signal in the ear canal increases in amplitude compared to when the transducer is unattached to the aural cartilage. The airborne sound in the canal is subsequently transmitted via the eardrum in the same manner as with AC. The signal is predominately transmitted via the eardrum and ossicles, although CC delivers the signals by vibrating a transducer, similar to BC or non-osseous BC. Therefore, the conduction characteristics resemble AC rather than BC. In contrast to AC, CC uses the aural cartilage in the same way as the moveable plate of a vibration speaker to generate airborne sound. In other words, a part of the human body (aural cartilage) contributes to airborne sound generation. This hypothesis underlying the generation of airborne sound in CC is unique and currently not fully understood. Due to the unique characteristics of CC, acoustic devices utilizing CC may potentially provide benefits that cannot be obtained with AC or BC devices. To develop CC devices further, the mechanism underlying the conduction must be established. With this review, we aim to summarize previous reports regarding CC that we found on PubMed (search term “cartilage conduction hearing”) to facilitate its understanding. 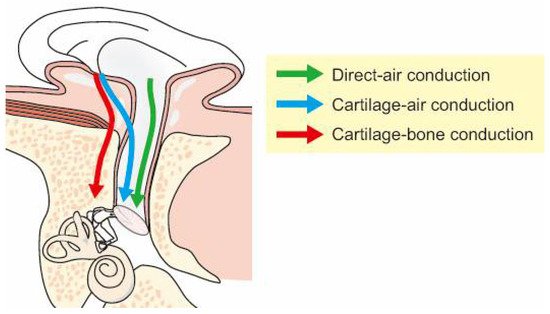 ３. Sound Pressure Level in the Ear Canal via CC 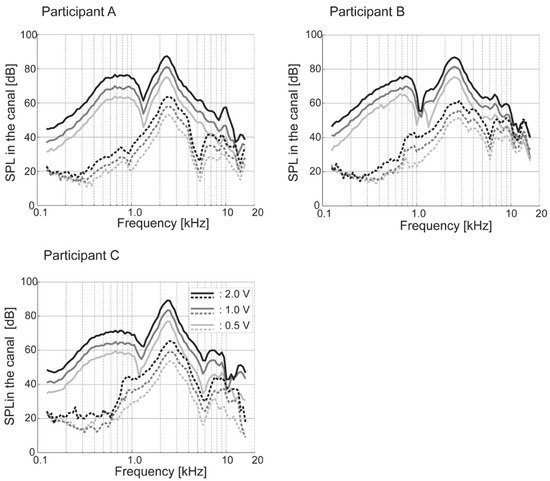 4.1. Threshold Shift with an Earplug

In a previous study, an earplug was used to show differences in the characteristics between CC and AC or BC [6]. Thresholds with and without the earplug were measured at 500–4000 Hz using a transformed up-down procedure (two-alternative forced-choice) [7]. The earplug interferes with both AC and direct-AC in CC. For AC, the thresholds worsened with the earplug for all frequencies. For CC, the threshold worsened with the earplug above 2 kHz, but the thresholds at low to mid frequencies did not; they were stable at 1000 Hz and improved at 500 Hz. These observations demonstrate that direct-AC is not the predominant pathway in CC. Furthermore, for BC the thresholds at mid to high frequencies were stable with the earplug, which also disagreed with the CC results.
A transducer can be placed in various ways on the aural cartilage. Another study evaluated the effect of an earplug on the thresholds when a transducer without a static force was placed on the tragus, soft tissue (pre-tragus region), and mastoid [8]. Thresholds with and without the earplug were measured at 500–4000 Hz using a transformed up-down procedure [7]. The thresholds for the tragus placement were significantly better than for other placements, both with and without the earplug, except with the earplug at 4000 Hz. The threshold elevations with the earplug for the tragus placement were significantly larger than those for the mastoid placement at 2000 and 4000 Hz. These results demonstrate that placing the transducer on the aural cartilage contributes to hearing improvement. Low-frequency boost can influence speech perception. Although there was no deterioration in speech recognition in the open ear, excessive low-frequency boost in the occluded condition reduced the scores, even in individuals with normal hearing [9]. Frequency adjustment may be necessary for the occluded ear when excessive low-frequency boost deteriorates speech perception [10].

4.2. Threshold Shift with Water Injected into the Ear Canal 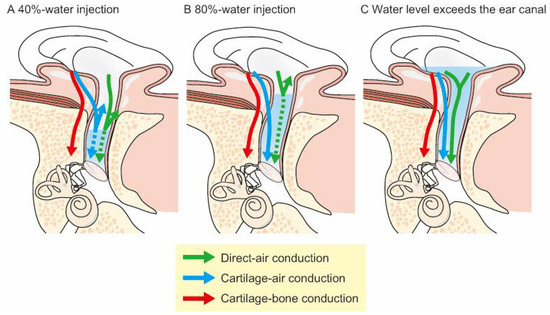 Figure 3. Effects of ear canal water injection on the transmission pathways. (A) The water stays within the bony portion of the ear canal, interrupting direct- and cartilage–air conduction. (B) The water enters the cartilaginous portion of the ear canal, avoiding an impedance mismatch between air and water in the cartilage-AC pathway. (C) The water level exceeds the ear canal, allowing for direct water vibrations. (Figure 3 was originally presented in Nishimura et al. 2015, Figure 1 [2]).
The effect of water in the ear canal was also evaluated at 500–2000 Hz for five different placements of the transducer: the tragus, intertragal incisure, anti-tragus, pre-tragus, and mastoid [11]. Among the CC conditions (tragus, intertragal incisure, and anti-tragus), the results showed the same amount of threshold shifts when water was injected into the ear canal, and the fixation placement did not affect the threshold shifts by water injection. Thus, the cartilage-AC characterizes the acoustic properties of CC.

Acoustic devices that utilize CC, including smartphones and hearing aids, have been developed [13][14][15][16]. CC hearing aids (HA; CC-HA) have already been used in clinical practice in Japan since 2017. When direct- and cartilage-AC are functional (such as for sensorineural hearing loss), a commercially available CC-HA (Figure 4) could provide adequate amplification for mild to moderate hearing loss, as estimated by measuring the output level using a simulator which can evaluate the airborne sound in CC [17]. When direct- and cartilage-AC are not functional, patients who receive the most benefits from CC-HAs are patients with aural atresia. These patients require BC-HAs or implantable devices to achieve sufficient amplification [18][19][20][21][22][23][24]. However, conventional BC-HAs have disadvantages associated with their fixation style; the transducer is fixed with a headband using static force, which can lead to discomfort, pain, and irritation [19]. The fixation of the transducer can cause poor esthetics. Surgical procedures, such as implanting bone-anchored hearing aids (BAHAs), are additional options [18][19][20][21][22][23][24] but involve various risks, such as adverse medical and surgical events, infection, and follow-up surgery [25][26]. Some patients also refuse BAHA implantation because of cosmetic considerations [27]. In contrast, the CC transducer is fixed without a static force, mitigating some of the fixation problems with BC-HAs, and it does not require surgery. In contrast to AC, CC mechanical signals can be delivered directly to the tissue. CC also has transmission advantages in the atretic ear over AC because it avoids the impedance mismatch between air and skin. Thus, CC-HAs are a possible alternative for patients with aural atresia.