Somatostatin is widely diffused in the central nervous system, where it participates to control the efficiency of synaptic transmission. This peptide mainly colocalizes with GABA, in inhibitory, GABA-containing interneurons from which it is actively released in a Ca2+ dependent manner upon application of depolarizing stimuli. Once released in the synaptic cleft, somatostatin acts locally, or it diffuses in the extracellular space through “volume diffusion”, a mechanism(s) of distribution which mainly operates in the cerebrospinal fluid and that assures the progression of neuronal signalling from signal-secreting sender structures towards receptor-expressing targeted neurons located extrasynaptically, in a non-synaptic, inter-neuronal form of communication. Somatostatin controls the efficiency of central glutamate transmission by either modulating presynaptically the glutamate exocytosis or by metamodulating the activity of glutamate receptors colocalized and functionally coupled with somatostatin receptors in selected subpopulations of nerve terminals. Deciphering the role of somatostatin in the mechanisms of “volume diffusion” and in the “receptor-receptor interaction” unveils new perspectives in the central role of this fine tuner of synaptic strength, paving the road to new therapeutic approaches for the cure of central disorders.

1. The Somatostatinergic System in the Central Nervous System

The cyclic tetradecapeptide somatostatin was initially identified as a hypothalamic peptide that regulates growth hormone secretion from cells of the anterior pituitary gland [1]. Soon after, data were provided showing that somatostatin is widely expressed in the central nervous system (CNS), where it plays a main role as regulator of neuronal functions [2]. Here, the peptide exists in two main biologically active forms, the somatostatin-14 (SRIF-14), which is the peptide firstly discovered and the amino-terminal extended form, we refer to as the somatostatin-28 (SRIF-28). In mammals, somatostatin originates from a single gene that encodes for preprosomatostatin (116 amino acids) which is cleaved into prosomatostatin (96 amino acids) from which SRIF-14 and SRIF-28 originate [3][4][5][6].
Somatostatin mediates its actions through a family of G protein-coupled receptors (GPCRs) having a structural distribution in cell membranes. These receptors are typified by seven transmembrane domains that couple either to inhibitory or facilitatory G proteins [7]. Five genes encoding the distinct somatostatin receptor subtypes, we refer to as sst1-sst5 receptors, have been decoded in humans and other species. Among these structures, the carboxy-terminal tail of the sst2 receptor undergoes alternative splicing further yielding to other two isoforms, namely the sst2A and sst2B receptors [8][9][10]. The two natural active forms of somatostatin (namely SRIF-14 and SRIF-28) have comparable affinities towards the different receptor subtypes and cannot be used to pharmacologically discriminate them [11].
In neurons, the members of the somatostatinergic receptor family couple inhibitory G proteins (Gi/Go), whose α subunit negatively controls the adenylyl cyclase (AC)-mediated pathway. The activation of these receptors leads to reduced production of cyclic adenosine monophosphate (cAMP) and consequent hypoactivation of protein kinase A (PKA)-mediated pathway(s), including those controlling the opening of the voltage-operated calcium channels (VOCCs). The main consequence of the translocation of the α subunit is a reduced influx of Ca2+ ions and consequently only a partial activation of the associated intraterminal events. Concomitantly, also the βγ subunits are mobilized and translocated to activate inward-rectifier K+ channels. The signal originated from this multistep-intraterminal enzymatic pathway is by one side the hyperpolarization of the neuronal plasma membranes due to the increased K+ ions influx and, on the other side, the partial inactivation of the VOCCs and the reduction of the AC activity. These concomitant events converge to silence most of the cellular-mediated processes.
It is, however, worth stressing that some of the sst receptor subtypes (namely the sst2, sst3, sst5 receptors) also link facilitatory G proteins which positively couple the protein phospholipase C (PLC). In this case, the activation of the receptors favours the translocation of PLC to the neuronal membranes, where the enzyme triggers the hydrolysis of membrane phosphoinositides to produce inositol trisphosphate (IP3) and diacylglycerol (DAG), which in turn activate intraterminal protein kinase C (PKC)-dependent events and related phosphorylative signalling (Figure 1) [7][9][10]. Notably, this pathway also leads to the phosphorylation of cytosolic tyrosin kinases (src) that in turn control cellular functions (i.e., by modulating the activity of other receptors, as well as by triggering apoptotic events in selected subpopulations of cells, including the tumoral ones) [7][12].

Figure 1. Schematic representation of the intraterminal enzymatic pathways coupled to sst receptors in isolated nerve endings. (left) Somatostatin-14/28 binds sst receptors negatively coupled to adenylyl cyclase (AC) and reduces the endogenous production of cyclic adenosyl monophosphate (cAMP) and the protein kinase A (PKA)-mediated phosphorylative pathways. (right) Somatostatin-14/28 also interacts with sst receptors positively associated to phospholipase C (PLC) then favouring its translocation to the synaptic membranes where the enzyme hydrolyses the phosphoinositides producing inositol trisphosphate (IP3) and diacylglycerol (DAG), which in turn activate protein kinase C (PKC) and cytosolic tyrosine kinases (src).
Starting from the first evidence supporting the existence of sst receptor subtypes, efforts were made to classify them by a pharmacological point of view and to identify lead compounds that could unveil receptor-directed intervention for the cure of pathological conditions. The pharmacological classification of the sst receptors was first based on the affinity of the receptor for selective peptidergic somatostatin-like ligands, particularly octreotride and seglitide [9][11][13]. Starting from the late 1990s, however, non-peptide ligands typified by huge selectivity towards selected receptor subtypes also became available [14][15]. These non-peptidergic compounds had a great impact on the subclassification of the sst receptors, as well as on the definition of their physio-pathological roles, since they permitted to bypass some limitations due to the peptidergic nature of the available ligands, including the unfavourable pharmacokinetic profile in in vivo studies, as well as the unpredictable distribution in in vitro models typified by a high structural complexity (i.e., brain tissue slices).
As far as the neuronal compartment in the CNS is concerned, the pharmacological profile and the main structural features of the receptor subtypes led to classify them into two main groups: the somatostatin release-inhibiting factor group 1 (SRIF1), including the sst2, 3 and 5 receptors and the SRIF2 group, consisting of the sst1 and sst4 receptor subtypes with a prevalent postsynaptic localization [16][17]. Starting from these findings, the pharmacological efforts to draw new, even more selective ligands grew up and nowadays new classes of peptidergic and non-peptidergic molecules are available for both clinical and preclinical studies [5][9].
In the CNS, the somatostatinergic system is involved in several cellular events subserving physiological processes related either to the endocrine or the exocrine control of hormone release, as well as to molecular processes underlying cognition, sleep, and motor coordination. Somatostatin also participates to the onset and the development of pathological events involving cognitive and motor impairments and even neurodegenerative disorders such as Alzheimer’s disease, epilepsy, and tumours. All these aspects have been already discussed in dedicated reviews [5][7][13][16] and will be not recapitulated in this work.

In the CNS, peptides are produced at the endoplasmic reticulum, far from the synaptic processes and stored in dense core vesicles that are then transported along the axonal processes to the synaptic varicosities and nerve terminals specialized for neurotransmitter exocytosis. Data available in the literature suggest that these dense core vesicles preferentially do not release their content into the synaptic active zone, but rather nearby these structures, perisynaptically (Figure 2) ([18] and references therein). In most cases, the vesicles also contain non-peptidergic neurotransmitters which are co-stored and co-released with peptides upon depolarization of axonal terminals [19][20][21]. As far as the somatostatin is concerned, somatostatinergic-containing dense core vesicles are mostly present in interneuronal networks innervating the septum, the striatum, the hippocampus and the cortex of mammals [22][23][24][25]. The neocortex and the hippocampus represent the brain regions showing the most diffuse somatostatinergic immunopositivity [26]. The main features of the somatostatin-expressing interneurons in the cerebral cortex and their role in controlling cortical circuits in physio-pathological conditions have been recently described by Riedemann [27] and will be not further discussed in the present review. 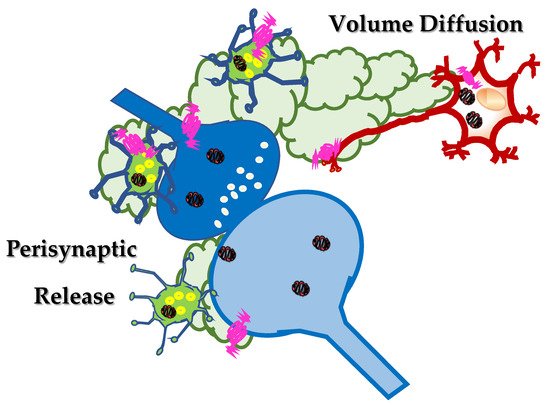 3. Somatostatin Receptors and Metamodulation in the Central Nervous System

When analysing the mechanisms of control of transmitter exocytosis, the impact of selected presynaptic receptors is usually analyzed individually, independently on whether these receptors colocalize with other ones that could be activated by the same neurotransmitter or by other modulators. The study of the presynaptic mechanisms of control of neurotransmitters release, however, unveiled the coexistence and even in some cases the physical association of auto- and heteroreceptors, whose concomitant activation modulates a common functional response (i.e., the exocytosis of neurotransmitter elicited by a mild depolarizing stimulus). This receptor-receptor cross-talk is at the basis of the “metamodulation” of synaptic transmission and accounts for the complexity of the mechanisms of control of neurotransmission in the CNS [45][46][47][48][49].
The term “metamodulation” [39][49][50] was first proposed to recapitulate the physical and functional integration of colocalized GPCRs [46][47][48][49], with particular emphasis to their impact on the efficiency of neurotransmitter release, but it is now extended also to the receptor-receptor interactions involving ionotropic receptors [51][52] or transporters [53].
Starting from the multiplicity and the complexity of the functional responses that originate from the metamodulation, it is worth reminding that, in most cases, each receptor participating to the receptor-receptor cross-talk exerts on its own a direct control of the neurotransmitter release that, however, is significantly modified when the colocalized receptor(s) is concomitantly activated. In other cases, one receptor can be per se functionally silent (i.e., unable to modify on its own the efficiency of neurotransmitter release) but it can modulate the colocalized receptor. It is the case of the CXCR4 receptor that colocalizes and functionally controls the NMDA receptor function in both glutamatergic and noradrenergic nerve endings [51] or of the sst5 heteroreceptor controlling the NMDA-mediated releasing activity in noradrenergic terminals [12].
Whatever the impact of the presynaptic receptors on the releasing activity, the final outcome of the metamodulation always differs from the mere sum (or difference) of the effects elicited by each receptor alone, unveiling the allosteric nature of the cross-talk.
The functional interaction is referred to as an “agonist-like interaction” when the final effect is higher than the sum of the receptor-induced events (i.e., the mGlu1-mGlu5 receptors [50] or the nACh-NMDA receptors interactions [53]), or, conversely, it is defined an “antagonist-like interaction” if the outcome is quantitatively lower (i.e., the mGlu2/3 and the 5-HT2A receptors [54]).
Somatostatin receptors heterodimerize to form oligomeric structures typified by pharmacological properties different from those of the homomeric assemblies [55]. The heterodimerization of sst receptors was first proposed based on the observation that neurons express more than one sst receptor subtype [56]. The finding raised the question on whether the colocalized sst receptors are redundant or if they interact each other to improve/modify their functional outcomes. The results allowed to conclude that sst2 and sst4 receptors can functionally couple in both a cooperative and a competitive manner in the CA1 region of the hippocampus to control glutamatergic excitability [57][58]. Furthermore, in the same brain region functional interactions were also proposed to link sst1 and sst2 receptors [59] and sst1 and sst4 receptor subtypes [60]. Finally, sst5 receptor subtypes were reported to heterodimerize with sst1 but not with sst4 receptors, then indicating that heterodimerization is not a general phenomenon, but it is preferentially restricted to certain receptor subtypes combinations. The outcome of these receptor-receptor interactions, however, remains elusive, nor evidence have been provided supporting their existence in nerve terminals and synaptic boutons to metamodulate presynaptically neurotransmitter exocytosis. sst receptors were also proposed to oligomerize with GPCRs belonging to other receptor families, namely the opioid and the dopaminergic receptors [61][62][63], therefore increasing the complexity of their role in the central metamodulation.
Finally, the term metamodulation can be also used to describe the receptor-receptor interactions involving ionotropic and metabotropic receptors [12][53], as described in the next paragraph that is dedicated to the metamodulation, bridging the sst5 and the NMDA receptors on noradrenergic nerve endings.