Cancer is a leading cause of death by disease in children and the second most prevalent of all causes in adults. Testicular germ cell tumors (TGCTs) make up 0.5% of pediatric malignancies, 14% of adolescent malignancies, and are the most common of malignancies in young adult men. Although the biology and clinical presentation of adult TGCTs share a significant overlap with those of the pediatric group, molecular evidence suggests that TGCTs in young children likely represent a distinct group compared to older adolescents and adults. The rarity of this cancer among pediatric ages is consistent with our current understanding, and few studies have analyzed and compared the molecular basis in childhood and adult cancers.

Testicular germ cell tumors (TGCTs) are a distinctive set of diseases in oncology practice due to their curability or the mixture of histologies that appears to reflect embryogenesis. TGCTs are the most common solid tumor in young adults, representing 0.4% of new cases from all sites [1]. In early ages, germ cell tumors represent 3.5% of childhood cancers, occurring in a bimodal distribution with one peak in the first four years of life and a second in adolescence [2][3], and TGCTs represents about 20% of all cases [4]. The incidence rate of testicular germ cell tumors starts to increase in the late teens (10 years old) and reaches its peak in the young adult age group [5][6][7].
TGCTs are classified according to genotype, phenotype, origin cell, and germ cell neoplasia in situ (GCNIS) relationship into three groups. Type I is rare in postpubertal testis and presents as a yolk sac tumor in children less than 6 years old and no precursor cell is identified. Type II is common in postpubertal men in the third and fourth decades of life, with GCNIS as a precursor, which leads to several histologies (see below). Type III usually affects men older than 50 years, and the spermatocitic tumor is a phenotype that is not related to GCNIS. In the current study, we focus on TGCT Types I and II [8].
TGCTs are organized into two main histological groups, known as seminoma (SE) and non-seminoma germ cell tumors (NSGCTs). Seminoma GCTs are made up of undifferentiated germ cells that can histologically resemble sperm and young oogonia, or even germ cells from developmental strains. NSGCTs are subdivided into several histologies, such as embryonal carcinoma, yolk sac tumors (YSTs), teratoma, choriocarcinoma, and mixed NSGCT, in which different histologies are present in different proportions. In contrast to embryonal carcinoma, which histologically resembles the blastocyst, YST has a complex endodermal morphology with embryonic and extraembryonic endodermal components. Mature teratomas are benign tumors, and are the most differentiated, although they may harbor unique neural differentiation as immature teratomas. Finally, choriocarcinoma has trophoblastic differentiation and characteristically features a high level of human chorionic gonadotropin (hCG) in the bloodstream [9].
The clinical presentation of TGCTs usually involves painless swelling of one testis, and is sometimes perceived at a late stage in adults by the partners, and by parents in children. However, it may present with an enlarged tumor or even a palpable abdominal mass when the diagnosis is made at a late stage [10].
Cisplatin is the most important drug used to treat TGCTs and, in recent decades, has changed the natural history of the disease [11][12]. To date, no other drug has outperformed the results of platinum-based combinations; this includes carboplatin, which, in the adult population, has had inferior results [13][14]. Different combinations and doses have been used in protocols for adults and children, often to reduce the acute and late toxic effects, without compromising the outcomes in the latter group [15].
TGCTs have different survival rates according to the age group, with adolescents having a lower rate of event-free survival in a 3 year period (59.9%) compared to children (87.2%) or adults (80.0%) [3][16]. Twenty to forty percent of patients with metastatic testicular germ cell tumors relapse after first-line chemotherapy [11][12]. Furthermore, approximately 50% of these patients can still be cured, and histology, primary tumor location, response to first-line therapy, tumor marker concentrations, and location of metastases (liver, brain, and bone) have been proven to be important prognostic indicator factors in testicular germ cell tumors, in addition to the dose of chemotherapy [17].
Different cytogenetic abnormalities are described when comparing the age of presentation [8]. TGCTs are tumors with a low mutational load, but in their postpubertal presentation, mutations in genes such as KRAS, KIT, and TP53 play a role, in addition to the changes in the number of copies of the KRAS gene [8][18]. Epigenetics has been the focus of attention in TGCTs. SE and NSGCTs have different methylation patterns, and interest in the role of miRNA is growing, particularly miR-371a-3p and miR-375 as potential biomarkers [18][19][20].

2. Etiopathogenesis of TGCT in Child and Adults

Curiously, the pathogenesis of TGCT begins in utero during embryogenesis, when embryonic stem cells give rise to the primordial germ cells in the genital crest present in the midline of the embryo [21][22]. Pathogenesis differs in some aspects of differentiation, histogenesis, and genomic instability between adults and children. Primordial germ cells are the most implicated in studies on the tumorigenesis of germ cell tumors, and due to their totipotent nature, TGCTs have a wide range of possible histologies. In Type I TGCTs, prepubertal teratomas, as benign tumors, have limited developmental potential and may arise during the migration of primordial germ cells. However, the chromosomal loss of 1p, 4, and 6q, in addition to 1q, 12, 20q, and 22, are implicated in the development of malignant YSTs, the histology most frequently found in testicular tumors in childhood [9][23].

Because TGCTs are a heterogeneous tumor, it is a challenge to study their genetic basis. However, in recent years, efforts have been made to understand the underlying molecular biology (Table 1) to further improve patient outcomes, particularly for those with chemoresistance and poor risk of disease.
Table 1. Epigenetic-based biomarkers in testicular germ cell tumors in adult and pediatric patients.

4. In Vitro and In Vivo Models 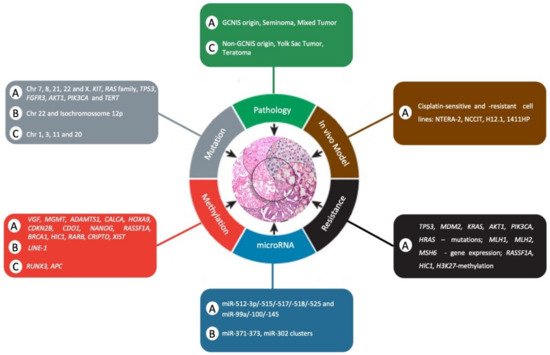 Figure 1. Comparison of clinical and molecular differences between adult and pediatric patients with TGCTs as a hallmark of cancer. The letter “A” represents adults, “C” represents child, and “B” represents both adult and child. Adapted from Hanahan and Weinberg [72].