Algeria—being the largest county in Africa—has experienced a rapid growth in energy demand over the past decade due to the significant increase in residential, commercial, and industry sectors.

The consumption of electrical power has been continuously increasing due to the rapid growth of the population and economy. Total global energy consumption increased by 2.9% in 2018, reaching 26,700 TWh in 2018, whereas global energy production rose 30% from 2016 to 2018 [1][2]. The United Nations Human Development Index (HDI) proposes that growth in energy consumption up to around 100 Gigajoules (GJ) per person is linked with the substantial increase in human development and comfort. Fossil fuels contributed to almost 75% of the global electricity requirements in 2018, leading to increased carbon dioxide (CO2) emissions. On the other hand, the Intergovernmental Panel on Climate Change (IPCC) reported the global average temperature on the Earth’s surface has increased by 0.2 °C to 0.6 °C, resulting in the disappearance of ice sheets, massive changes in vegetation, regional extinctions and a sea-level rise of about 120 m [3]. Hence, it is crucial to reduce CO2 emission through the introduction of renewable energy (RE) generation methods in order to replace fossil fuel generation. Since a decade ago, many countries have implemented green energy economies with goals and policies to increase their RE generation and reduce fossil fuel consumption [4]. In 2018, 169 countries had RE goals, and 150 countries had dedicated funds for RE research and development with supportive policies [1].

Algeria is located in the Sunbelt, which has a high potential for solar energy. In 2011, the Algerian Ministry of Energy and Mining (MEM) introduced the law No. 11-11 to fund and support RE projects and lay the groundwork for future RE programs and sustainable development in the country. This law is considered a new incentive to commence initiatives to minimize the excessive consumption of conventional energy sources that are related to higher CO2 emissions and fluctuations in oil and gas prices [5].

Several researchers have provided updates on the RE status in Algeria. For example, A. Boudghene Stambouli provided a review on the energy development in Algeria in 2012 [6][7]. The author discussed the country’s energy scenario, alongside exploring the potential of solar and wind for reducing the dependency on fossil fuels. Other studies related to Algeria’s energy status have focused on the relationship between renewable and non-RE that contributes to high CO2 emissions, such as [8]. Recently, a study was conducted on Algeria’s RE status and policies [9][10]. However, these studies have not provided an in-depth analysis of Algeria’s current RE capacity and generation, but rather, they have focused on RE future targets and policies.

Moreover, they have also heavily relied on old reports and the literature from past decades. There are also discrepancies between the energy data provided by these sources. Therefore, this article’s goal is to collect, compile, summarize, and analyze the data from sources such as reports, scientific articles, and online news articles related to the subject of RE in Algeria.

Algeria is the largest county in Africa and the 10th largest in the world. It has an area of 2,381,741 km2 and an estimated population of 42.2 million people, with an average of 17.71 inhabitants/km2 [11]. It is located in the north of Africa with a 1644 km long coastline, as shown in Figure 1 [12]. The Southern part of the country consists of a significant portion of the Sahara Desert. This region is hot year around. However, the coastal area of the country is mountainous and hilly, with an average rainfall of 400 to 670 mm and temperatures ranges from 25 °C to 11 °C.

Algeria has the 4th most influential economy in Africa, with a Gross Domestic Product (GDP) of USD 178.3 billion [13]. The country’s economy is mainly based on the production and export of oil and gas. Sonatrach is a national company responsible for the hydrocarbon sector. Algeria is among the countries that have an abundance of fossil and fuels and is a member of the Organization of Petroleum Exporting Countries (OPEC) [14][15]. Oil and Gas basins in the country are located in seven areas: the Ghedames and Illizi basins in the east; the Timimoun, Ahnet and Mouydir basins in the central region; the Reggane and Tindouf basins in the southwest, as illustrated in Figure 2 [13]. The country has the 3rd most extensive reserves of gas and the 7th most significant oil reserves in the world. In 2018, Algeria produced 12.2 billion barrels and 159 trillion cubic feet (Tcf) of oil and natural gas reserves, respectively [16]. 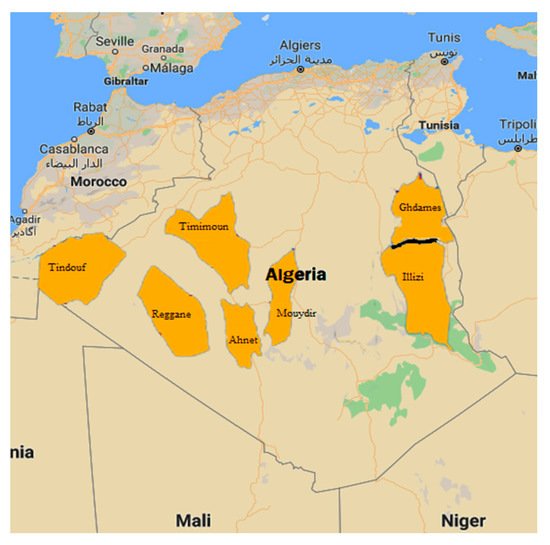 Figure 2. The location of gas and oil basins in Algeria.

Figure 3 shows the current energy mix of Algeria. The country relies heavily on fossil fuels—such as natural gas and oil, which contribute 64.84% and 34.63%, respectively—for electricity generation. Algeria showed substantial growth in the production of gas, and oil from the year 2000 to 2018, contributable to a 33.3% increase in the population [17][14]. Although 28% of Algeria’s population is located in rural areas, 100% of households in the country have access to electricity [11]. 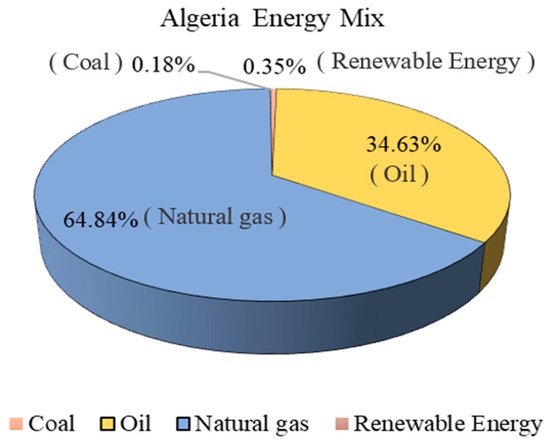 The government launched the hydrocarbon law in July 2011 to increase competitiveness by easing taxes and encouraging import and export to attract foreign investment. Moreover, Algeria has many oil refineries and gas treatment center projects that have been kicked-off under the supervision of the national oil company Sonatrach [13]. Currently, the Algerian government is seeking to minimize the energy reliance on hydrocarbons, which represent 99.4 % of the country’s power generation sources under the petroleum crisis.

Electricity production rose to 76.4 TWh in 2018 from 76.0 TWh in 2017, proportional to the population growth of almost 1 million people [18]. The load demand increased by 7.4% from 2007 to 2017. The country’s population and energy consumption profile are shown in Figure 4. By 2030, generation is expected to rise to approximately 150 TWh, with an additional 5.2% increment each year. The promulgation of the new law No. 02/01 February 2002, corresponding to the distribution of the electricity grid and gas, functioned as a steppingstone for reorganizing the sector and opening the electricity market. The outcome of this law includes significant grid expansion for electricity transmission from the year 2002 to 2015. Moreover, Algeria was is able to export more than 880 GWh of electricity in 2017 to the neighboring countries such as Tunisia and Morocco [19][20]. 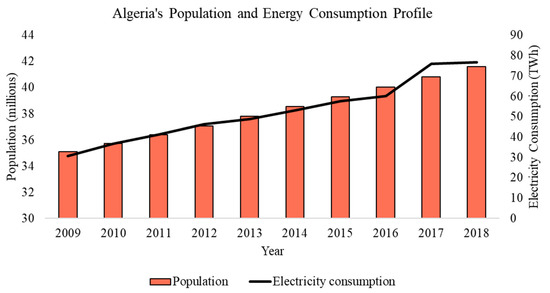 Figure 4. The evolution of population and electricity consumption in Algeria.

Due to the increase in energy demand each year, the Sonalgaz company estimated that 34,441 km of transmission lines are planned to be implemented from 2017 to 2027. Currently, 9930 km transmission lines are under development, with another 24,511 km planned, which includes national and international interconnections [21].