Xylella fastidiosa subsp. pauca is the causal agent of “olive quick decline syndrome” in Salento (Apulia, Italy). On April 2015, we started interdisciplinary studies to provide a sustainable control strategy for this pathogen that threatens the multi-millennial olive agroecosystem of Salento.

During recent years, the increase of global plant exports for agriculture and forestry has dramatically augmented the probability for phytopathogens to rapidly reach new countries and, consequently, to colonize and infect new crops and/or the same crop cultivated in another continent [1]. It should be said, however, that the introduction of pathogens and pests in a new area has also been observed in the past. For Puccinia striiformis f. sp. tritici, the causal agent of wheat yellow rust, it was established that the introduction of new populations of the pathogen into areas of wheat cultivation appear to be linked to commerce and travel over the last two centuries [2].
Pathogens can be hosted by asymptomatic potted plants, plant parts, seeds, bulbs, and timber as latent but viable cells of the pathogen that can start new infections when favorable conditions occur. The unintended introduction of new pests and pathogens in a new country poses serious risks for both cultivated crops and natural ecosystems [3]. Recent examples of newly introduced pathogens which caused severe damage to natural ecosystems include Chryphonectria parasitica in chestnut in southeastern Europe [4], and Phytopthora ramorum in oak species in the U.S.A. and in larch in the United Kingdom and Ireland [5][6]. Examples in cultivated crops include kiwifruit bacterial canker caused by Pseudomonas syringae pv. actinidiae introduced worldwide from eastern Asia in all major areas of Actinidia chinensis cultivation [7], and the “olive quick decline syndrome” (OQDS), caused by Xylella fastidiosa subsp. pauca introduced from Central America in Salento (Apulia, Italy) [8][9]. Dispersal of novel pathogens within an area could also be caused by many human activities not directly linked with the agricultural trade [10]. Within this context, countries with higher economic activity and population density tend to spread a greater number of biological threats [11].
Once introduced into a new area, the phytopathogens can become a permanent part of the new environment(s) depending on a series of factors such as the number of introduction events, the transmission rate of the pathogen, the density and spatial variation of susceptible host(s), the climatic conditions, and the synchronicity between host susceptibility and pathogen life cycle [12]. The climatic conditions and the complex organization of agricultural production and trade prevailing in the countries facing the Mediterranean Basin appear particularly favorable for the introduction and rapid establishment of exotic phytopathogens. This area is characterized by mild and wet winters that favor the transmission rate of pathogens and by a very rich array of cultivated and forest crops that feed the global circulation of propagative plant material [12]. The intense year-round touristic activities in this area also favor the unintended displacement and introduction of pests and pathogens from other continents [12]. Upon their introduction into a new area, the emergent pathogen should be eradicated if possible (e.g., through prompt pathogen detection, restricting the area of infection, and organized human activities) or it should be controlled according to known or new strategies to limit the disease severity and its further spread [13].

2. The Concept of Pathogen Control in Plant Pathology and Xylella Fastidiosa

The main aim in plant disease management is to reduce the economic impact of pathogens on cultivated crops [14] through control strategies that can vary according to the cropping system, the climatic features of the area, and the agronomic techniques applied to the crop [15]. Controlling a plant pathogenic bacterium does not necessarily imply its elimination from the crop but rather a significant reduction of its inoculum size that allows the crop to regularly yield [13]. In contrast, control of X. fastidiosa implies its elimination from the diseased plant [16], due to the quarantine status of the pathogen for Europe and the concern for its possible spread in other territories of the continent. This is a crucial and difficult task, especially when this endophytic pathogen is well-established in an area long before its first detection, as in the case of the OQDS in Salento.
Eradicating X. fastidiosa is made more difficult by the bacterium’s ability to colonize many wild plant species and to be effectively spread in a territory by insect vectors. Cultivars that have retained resistane to X. f. subsp. pauca, such as Leccino, have limited multiplication of the pathogen within xylem tissue but do not eliminate the bacterium from the plant [17]; consequently, growing such cultivars does not achieve the goal of eliminating X. fastidiosa from the area. It would therefore appear that this pathogen, when not promptly detected in a new area, has a very high probability of becoming established there and destroying the cultivated crop in few years. In contrast, satisfactory reductions of grapevine Pierce’s disease caused by X. f. subsp. fastidiosa were recently obtained with a weakly virulent strain of the pathogen [18] or with a novel bacterial biocontrol agent [19].
From this “control” perspective, more efforts should be made to identify strategies that significantly reduce the bacterial inoculum size within the plant across the seasons. This approach, coupled with an effective control of the insect vector(s), could allow to limit both the severity and the spread of X. fastidiosa in a territory, allowing crops to coexist with the pathogen similar to other bacterial diseases.

The first record of an association of X. fastidiosa with olive groves showing twig and branch wilting in the Lecce province (Salento, Apulia) was reported on October 2013 [20]. The bacterium was isolated in cultures and characterized as belonging to the subspecies pauca, and the common name of “olive quick decline syndrome” was proposed for the disease [21]. Th main symptoms include leaf, twig and branch wilting, followed by the death of the tree. The local cultivars Ogliarola salentina and Cellina di Nardò are very sensitive to the disease.
At the time of the first record, the disease was already spread over 8000 to 10,000 hectares of the Salento territory, corresponding to about 800,000 to 1,000,000 olive trees [22]. At that time, X. fastidiosa was added to the A1 list of quarantine pathogens for the European and Mediterranean Plant Protection Organization (EPPO), and, consequently, eradication measures had to be implemented, even though previous experience and the relatively widespread occurrence of the pathogen in the area made a successful outcome doubtful [23].
After an initial attempt to eradicate trees, an area of Salento was officially designed as “infected” and additional “containment” and “buffer” areas were established further north to monitor any occurrence of the pathogen and to prevent its spread within the region (decision of the European Union, 2016). Notwithstanding this, during the following years, X. f. subsp. pauca was reported in other olive groves of Salento in the Brindisi and Taranto provinces [24], so the extension and placement of “containment” and “buffer” areas changed during the years (decision of the European Union, 2020) (Figure 1). 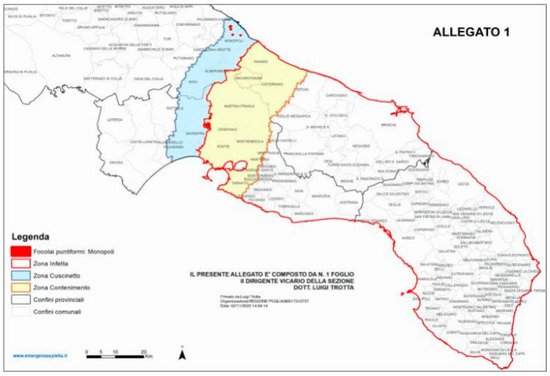 Figure 1. Demarcation of the “infected” (southern areas), “containment” (yellow) and “buffer” (blue) areas of Apulia according to the “Aggiornamento delle aree delimitate alla Xylella fastidiosa sottospecie pauca ST53”, based on the decision of the European Union 2020/1201 and on the decision of the Apulia region n° 548/2020. The “containment” and “buffer” areas are being monitored to reveal the occurrence of new olive and other plant species infected by Xylella fastidiosa subsp. pauca. Reproduced from Regione Apulia website: www.emergenzaxylella.it.
Currently, the pathogen is included into the A2 list of quarantine pathogens for EPPO, and a recent analysis has estimated that in Salento, about 6,500,000 olive trees are infected by the bacterium [25]. The monitoring plan to detect infected olive trees in the “containment” and “buffer” areas is under way, and it is carried out by the institutions of the Apulia region.

4. A Control Strategy to Preserve a Multi-millennial Agroecosystem

The centuries-old practices employed in the olive groves of Salento, such as extensive tree management of the local cultivars and the traditional way of olive picking, characterize the whole area as a typical Mediterranean olive agroecosystem that also represents a remarkable historical, cultural, and landscaped heritage [26] (Figure 2). The local cultivars—Ogliarola salentina and Cellina di Nardò—are among the richest olive cultivars in polyphenol content and can yield an oil with a very high nutritional value [27][28]. Due to their sensitivity to the disease, the risk of losing these cultivars to disease is very high. These features of the territory prompted us to find possible field strategies that could limit both the severity and spread of the OQDS in Apulia, including identifying treatments that offer a sustainable approach to the problem and might potentially effectively limit the X. f. subsp. pauca inoculum within the plant. The preservation of such agro-ecosystem fulfills the Sustainable Development Goals (SDG) of the United Nations, namely SDG 15: “Protect, restore and promote sustainable use of terrestrial ecosystems, sustainably manage forests, combat desertification, and halt and reverse land degradation and halt biodiversity loss” (https://sdgs.un.org/goals/goal15, accessed on: 24 April 2021). 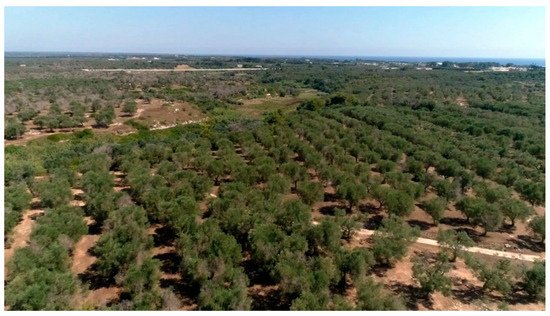 Figure 2. A continuum of olive trees that extend over kilometers characterizes the multi-millennial olive agro-ecosystem of Salento (Apulia, Italy).