Transdermal drug delivery systems (TDDS) have been developed as an attractive drug administration method in clinical dermatology [1]. Compared to the conventional oral route, intravenous, or subcutaneous injection, the TDDS provide an easier application without the first-pass effect and systemic side effects [2]. Nowadays, TDDS are widely applied in treatment for many dermatological diseases, such as psoriasis, contact dermatitis, and skin cancer. Moreover, TDDS is also suitable for long-term administration, especially for insulin delivery and some analgesic agents [3]. However, TDDS need to conquer the skin barriers, including stratum corneum (SC), surrounding lipid bilayer, and dermal tissue [4].
Therefore, great efforts have been made to achieve a better transdermal delivery efficiency during the past decades. Many transdermal delivery enhancement technologies have been developed from the first-generation to the fourth-generation, such as iontophoresis, electroporation, ultrasound, microneedles, and most recently, the nanocarriers [5]. Among them, nanocarriers show the greatest potentials in clinical applications, because of their independence on extra equipment, low skin irritation, and no damage on the intact skin barrier. In addition, nanocarriers can encapsulate macromolecules and hydrophilic agents such as non-steroidal drugs, photosensitizers, and some chemotherapy agents, as well as increase the drug stability and retention [6][7][8][9].
Various nanocarriers have been developed and investigated as useful TDDS. By optimizing the components and formulation, the nanocarriers can achieve ideal morphological and physico-chemical characteristics (such as size and surface charge). Although they display the potentials in transdermal delivery, their therapeutic applications suffer from their limited penetration ability, drug encapsulation and release, and so on [10]. Recently, based on the well-developed nanocarriers, many studies concentrated on surface modification to further improve their therapeutic applications. The flexible structures and exposed functional groups provide the opportunity for this procedure. 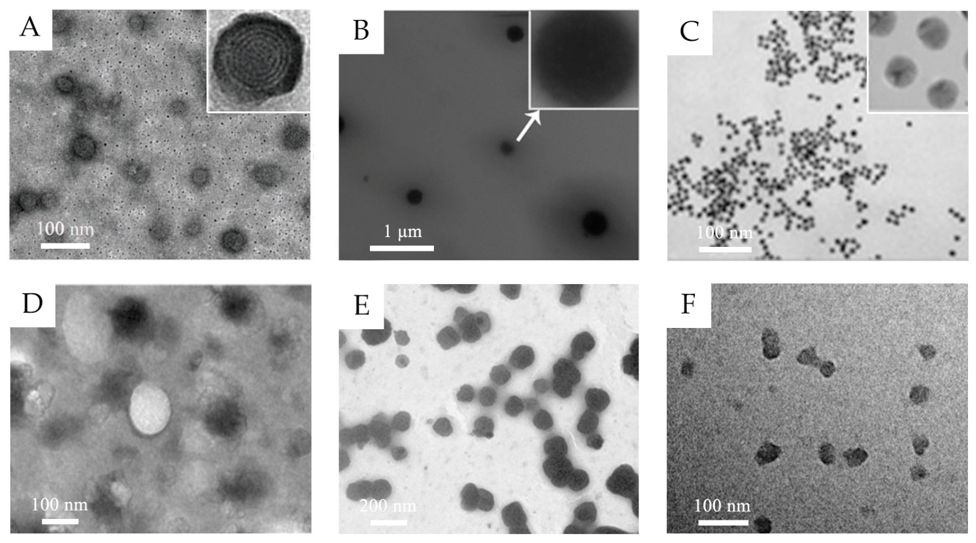 Lipid-based nanovesicles are defined as spherical vesicles with one or more lipid bilayers and aqueous inner core, in which hydrophilic drugs can be encapsulated in internal core and hydrophobic drugs can be inserted in external lipid bilayers. Liposomes, the classic and most mature lipid-based nanovesicles, are generally formed with phospholipid molecules and cholesterol as a stabilizer [35]. The phospholipid component could interact with the lipids of the SC, namely fusion mechanism, and thus achieve the transdermal effect. Some deformable liposomes are also reported to penetrate through SC with their intact structure [16]. However, its penetration in the deeper skin layer is limited and the accumulation was mainly observed in the epidermis because of its relatively low fluidity [36]. Therefore, great efforts have been made to improve the skin penetration.
Ethosomes and transfersomes are the most investigated innovative lipid-based nanovesicles, with increased softness, deformability, and elasticity [37]. Ethosomes, composed of phospholipid and ethanol, are generally formed as multilamellar nanovesicles. Ethanol can increase the fluidity of phospholipid bilayers, disrupts the membrane barrier of SC, and thus enhances the penetration ability [17]. Transfersomes are composed of phospholipid and edge activators (such as Tween 80, Span 80, and sodium cholate). The edge activators, as the membrane-softening agent, endow transfersomes with remarkable flexibility and deformability for passing through the narrow pores [18].
Some other lipid-based nanovesicles are also developed with different compositions. Niosomes are synthesized with cholesterol and nonionic surfactants, which replace the phospholipid. The nonionic surfactants enhance the drug encapsulation efficiency and cholesterol increases the rigidity and stability [19]. Glycerosomes, as the term implies, are composed of glycerol, which serves as the same role of edge activators in transfersomes. The glycerol improves the elasticity and deformability of the vesicle with a dose-dependent effect [20]. Terpenes are introduced to form the invasomes because they can disrupt the SC lipid structure and increase the membrane elasticity at a low concentration as 1% w/v [21].

Different from lipid-based nanovesicles, lipid nanoparticles are solid particles, mainly encapsulating drug molecules in a non-aqueous core. They include solid lipid nanoparticles (SLN), composed of solid lipids, and nanostructured lipid carriers (NLC), as the second generation, composed of solid and liquid lipids. Compared to SLNs, liquid lipids in NLCs avoid recrystallization of solid lipids and thus increase the stability. Some surfactants are introduced to reduce the interfacial tension between the aqueous phase and hydrophobic lipid structure and to improve the formulation stability [38].
The transdermal delivery mechanism of lipid nanoparticles remains unclear. The possible mechanisms are as follows: the lipid nanoparticles demonstrate skin adhesive property and form a mono-layer lipid film, which results in the “occlusion effect”, to avoid the water evaporation, enlarge the inter-keratinocyte gap, and thus enhance the drug penetration [22]. It is also reported that the lipid components and incorporated surfactant could disrupt skin structure and increase the intercellular space by their interaction with skin lipid layer, especially in SC. Gu et al. observed the skin structure after being treated with triptolide-loaded lipid nanoparticles [11]. The SEM images and histopathological analysis demonstrated the inflated SC, loose texture, and dilated epidermis, indicating the interaction between lipid nanoparticles and skin.

Polymeric nanoparticles can be prepared by both natural polymers and synthetic polymers. The natural polymers, such as chitosan, gelatin, and albumin, are easily biodegradable and biocompatible. Chitosan, one of the most frequently used natural materials, is positively charged, which is suitable for encapsulating negative-charged drugs via electrostatic interaction and facilitates the cellular internalization [39]. Meanwhile, the functional groups of chitosan provide great potential for further surface modification [40]. Compared to natural polymers, the synthetic polymers show better purity and consistency. Synthetic polymers are biodegradable, such as polylactides and poly (lactic-co-glycolic acid) (PLGA) copolymers, or non-biodegradable, like poly (methyl methacrylate) and polyacrylates. The nanoparticles formed from synthetic polymers are frequently used for delivering the hydrophobic drugs [39].
The size of polymeric nanoparticles is generally too large to pass through the SC, where they can form as a drug reservoir and create a drug concentration gradient to enhance the drug permeation [22]. Tomoda et al. introduced the iontophoresis to enhance the skin penetration of negatively charged PLGA nanoparticles [41]. Takeuchi et al. developed positively charged chitosan-coated PLGA nanoparticles for iontophoretic transdermal delivery of positively charged drugs and observed that the nanoparticles penetrated through the follicle pathway [23]. Recently, Takeuchi et al. synthesized 40-nm silk fibroin nanoparticles which can reach the deeper dermis through both paracellular route and hair-follicle route [13]. It is indicated that polymeric nanoparticles smaller than a certain size can penetrate through the epidermal barrier.

Inorganic nanostructures are widely applied in drug delivery for cancer therapy with their probable bio-imaging and phototherapy potential. Some nanoparticles with positive charge, high surface lipophilicity, and small size have transdermal capability by passively penetrating SC [2]. Because of their great stability and high potential for surface functionalization, some studies have also evaluated the transdermal drug delivery efficiency of some inorganic nanoparticles.
Gold nanoparticles are well explored as TDDS, because of their low cytotoxicity and controllable particle size [42]. As reported, the skin penetration amount and rate increase with the decreasing particle size; moreover, the accumulation of 15-nm size particles are observed in deep dermis [24]. Furthermore, the surface ligands bind with the gold nanoparticles with Au-S bonding, which means various ligands could be conveniently conjugated on the surface of particles by pre-thiolation [12]. This specific characteristic of gold nanoparticles enables the application in gene delivery. Zheng et al. conjugated gold nanoparticles with thiolated epidermal growth factor receptor (EGFR) siRNA duplexes (SNA-NCs) via Au-S bonding [25]. The SNA-NCs penetrated through whole skin layer and successfully abolished EGFR expression in mouse model.
Some other metallic particles are also observed for transdermal application. Fe3O4 nanoparticles with a pH-sensitive amide bond successfully penetrate into deeper dermis via transfollicular route [26]. Photothermal CuS nanoparticles with near-infrared irritation can induce localized thermal ablation of SC and facilitate the penetration of particles [27].

Dendrimers are high-branched polymeric nanocarriers used as TDDS for transport hydrophobic agents and macromolecules, such as photosensitizers and chemotherapeutic agents. Conventional dendrimers with composition of poly (amidoamine) could not effectively cross the skin barrier but show penetration enhancer potential because of the interaction with skin lipid bilayers [28]. Recently, some studies concentrate on the size and surface charge of dendrimers and then developed the second-generation dendrimers with smaller size and skin penetration capability [43].
Micelles, also one type of polymeric nanocarriers, are composed of amphiphilic polymers or surfactants agglomerating in an aqueous medium [29]. Their flexible formulation endows micelles with drug co-delivery ability. Generally, the lipophilic drugs are loaded in core, while hydrophilic drugs are located mainly in the shell [30]. As TDDS, the micelles can increase the skin penetration by improving the water solubility of drugs. The polymer components are blocked by intact SC, and thus have less improvement for low-permeability drugs [31].
Nanoemulsions (NE) are dispersions of water and oil stabilized by surfactants, forming nanometric droplets of oil in water (O/W), water in oil (W/O), and bi-continuous emulsions. These different systems are suitable for delivering both hydrophobic and hydrophilic drugs. The oil phase and surfactants can disrupt the skin lipid bilayers and SC and enhance the drug permeation. Furthermore, the unique bi-phase structure provides excellent solubility for both liposoluble and water-soluble drugs, which leads to an increased drug concentration gradient for better penetration [22]. Shakeel et al. prepared W/O nanoemulsions of hydrophilic caffeine and 5-fluorouracil for transdermal anti-cancer therapy [14][44]. The W/O nanoemulsions significantly increased the drug permeation through para-cellular transportation. The limitation of nanoemulsions is long-term stability with the risk of Ostwald ripening, and overdosing surfactants may result in additional cytotoxicity [45]. Therefore, an ideal formulation with a suitable surfactant ratio still needs to be developed.
Nanogels are chemically or physically cross-linked polymers in nanosize swelling in medium. The cross-linked network structure demonstrates unique stimuli-responsive nature for drug loading and modulated releasing [15]. Nanogels could enhance the drug penetration mainly by following two aspects. Firstly, the stable nanocarrier dispersions in medium prolong the topical contact duration and form a localized high concentration of loaded drugs. Secondly, cationic polymers could be introduced in the network structure to interact with negatively charged keratinocytes [32]. Jayakumar et al. developed curcumin and 5-fluorouracil-loaded chitin nanogels for melanoma treatment [33][34]. The drug retention in the dermis of cationically charged chitin nanogels increased 4- to 5-fold as compared to the control solution. As observed in histological studies, the thinner keratin layer and fragmentation of SC revealed the interaction of chitin and epidermis.