Flowering is one of the most critical developmental transitions in plants’ life. The irreversible change from the vegetative to the reproductive stage is strictly controlled to ensure the progeny’s success. In Arabidopsis thaliana, seven flowering genetic pathways have been described under specific growth conditions. However, the evidence suggests that these pathways are tightly interconnected in a complex multilevel regulatory network. Here we summarized the information of our recent publication.

Flowering transition is a fundamental trait in plant development that marks the end of the vegetative phase and the beginning of the reproductive state. During this process, in Arabidopsis thaliana (hereafter Arabidopsis), a species from the Brassicaceae family, the Shoot Apical Meristem (SAM) becomes an Inflorescence Meristem (IM), which develops the Floral Meristems (FMs) at its flanks [1]. Then, the FMs differentiate into the flower organs [2].
The integration of developmental and physiological cues and the response to environmental signals forecast the best time for flowering to ensure success in reproduction and the offspring’s viability [3].
In Arabidopsis, seven flowering genetic pathways have been proposed. These pathways respond to different signals such as: long-day (LD) photoperiod [4][5][6]; gibberellins (GA) [7][8]; vernalization [9], environmental autonomous cues [10][11]; thermal regulation [12][13]; aging [14][15] and trehalose 6-phosphate (T6P) [16]. Also, it has been considered that different pathways converge into a few transcription factors (TFs) known as integrators of flowering time: FLOWERING LOCUS C (FLC), FLOWERING LOCUS T (FT); SUPPRESSOR OF OVER EXPRESSION OF CONSTANS (SOC1) and, LEAFY (LFY) [17][18][19][20]. The latter is one of the first genes induced at the primordial cells committed to forming the FM [21], and it is essential for floral developmental progression.
This hierarchical scheme of flowering transition has changed over time and the current model proposes a complex genetic network of about 300 genes that underlies floral transition [22].

Premature reproduction under suboptimal environmental conditions or at the early stages of development has implications on pollination and seed formation, with repercussions on the species’ fitness [23]. Therefore, flowering repressors are as relevant as promoter factors since they maintain the vegetative phase until specific signals trigger the reproductive transition. In Arabidopsis, these repressors were identified from early flowering loss of function mutants or late flowering overexpressor mutants [11][24][25][26].
One of these flowering repressors is FLC [24], a MADS-box transcription factor (TF) expressed during the embryonic and vegetative phases of development [27]. FLC negatively regulates important flowering promoters such as SOC1 (another MADS-box gene) and FT  [28].
When plants reach a developmental stage for flowering competence, FLC must be silenced. Multiple chromatin modifiers and RNA-binding proteins participate in FLC transcriptional and posttranscriptional regulation during this process [10][29]. Two possible mechanisms have been proposed. The first one considered a set of antisense long noncoding RNAs (lncRNAs) collectively called COLD INDUCED LONG ANTISENSE INTRAGENIC RNAs (COOLAIR), which are transcribed from the 3’-end of FLC and proximately polyadenylated by FCA, FPA, and FY, and spliced by PRP8 [30]. Some of the COOLAIR variants could lead to FLOWERING LOCUS D (FLD) recruitment, which demethylates H3K4me2, reducing the transcription of both sense and antisense FLC mRNAs [31]. Alternatively, there is evidence that FCA binds to CURLY LEAF (CLF), a Polycomb repressive complex (PRC2) subunit, in the presence of COOLAIR for H3K27me3 deposition at the FLC locus [32].
Importantly, FLC is also subject to epigenetic repression during vernalization, which accelerates Arabidopsis flowering transition when plants return to optimal growth temperatures [33]. On the contrary, suboptimal growth temperatures (5–16 °C) negatively affect flowering in many natural accessions of Arabidopsis [34]. In this case, FLOWERING LOCUS M (FLM; a member of the FLC clade) is subject to temperature-dependent alternative splicing that results in the inclusion of either the second (FLM-β) or the third exon (FLM-δ) [35]. At lower temperatures, the Arabidopsis SPLICING FACTOR 1 (AtSF1) preferentially binds to the first intron branch site of FLM pre-mRNA producing the flowering-repressive FLM-β isoform. Accordingly, the atsf1-2 mutant, which has very low levels of FLM-β and significantly higher levels of FLM-δ, is early flowering, but it has lost its sensitivity to temperature control [36]. It seems the net reduction in the abundance of FLM-β at optimal temperatures is sufficient to disrupt the formation of the repressive complex with SVP [35][37].

Plant’s endogenous cues that participate in flowering transition are present independently of the season, although environmental signals influence them. GAs hormones play an essential role in this process, as well as T6P, which constitutes a sensor of sugar availability and hence the plant’s reserves to support reproduction [8][16]. Both signals are interconnected with the miR156 - SQUAMOSA BINDING PROTEIN LIKE (SPLs) - miR172 regulatory module [15] and the MADS-domain TFs to induce flowering transition.
As the plant ages, miR156 levels gradually decrease, allowing SPL mRNAs accumulation. In turn, SPL9, SPL10, and SPL15 induce reproductive transition by regulating genes related to flowering and binding to the MIR172B promoter [38][39]. Subsequently, the accumulation of miR172 indirectly promotes flowering transition by targeting APETALA  2 (AP2) and AP2-like flowering repressors, which repress SPL3, SPL4, and SPL5 (SPL3/4/5) genes [38][40].
GAs constitute a group of tetracyclic diterpene compounds that have multiple functions in plant development. It was Lang (1957) who first described the effect of these hormones as bloom inducers [41]. Specifically, high levels of GA4 correlate with strong induction of LFY and AP1 at the incipient FM [42].
Induction of SPL3/4/5 by GA in the SAM is mediated by SOC1 [8][43]. Furthermore, GAs are required to release SPL15 from DELLAs, REPRESSOR OF ga1-3 (RGA), and GIBBERELIC ACID INSENSITIVE (GAI) inhibition. SPL15 then associates with SOC1, which, in collaboration with the REF6 and MED18 complex, induce FUL and MIR172B [39]. Additionally, GAs are important for upregulation of SPL10, which indirectly contributes to FT induction [44][38].
Interestingly, DELLA/GA signaling affects SPL9 function by two opposing mechanisms. On one hand, GA-induced ubiquitination of RGA is required for SPL9 to induce SOC1 [45]. On the other hand, SPL9 seems to require the presence of DELLAs to induce AP1 transcription, since SPL9-mediated expression of AP1 strongly decreases when plants are treated with GAs. The latter mechanism indicates that DELLAs also participate as co-activators [45].
Besides SPLs, GA signaling contributes to flowering transition by regulating the expression and activity of some MADS-box TFs in different manners (Figure 1). For example, FLC binding to SOC1 and FT regulatory regions is enhanced in the presence of RGA; thereby, its degradation by the addition of GA3 reduces FLC repressive action [46]. Moreover, GAs induce SOC1 through the activity of NF-Y, or by downregulation of GATA NITRATE-INDUCED, CARBON METABOLISM INVOLVED (GNC), and its paralog GNC-LIKE (GNL), which encode direct repressors of SOC1 [47][48]. 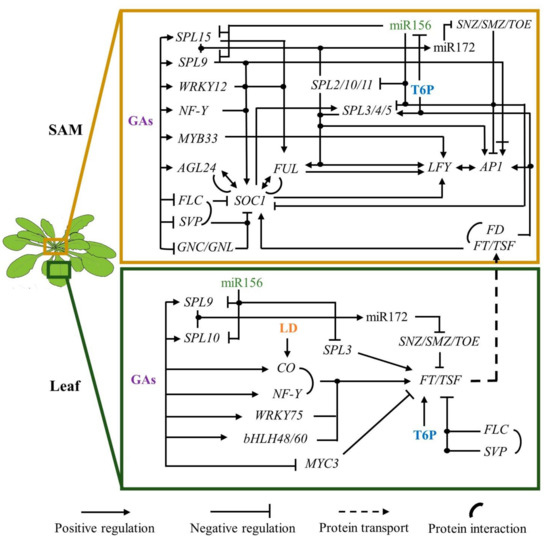 Figure 1. Gene regulatory network that promotes flowering transition in response to endogenous cues. Intricate regulations among the miR156-SPLs-miR172 module, and GAs and T6P signaling lead to FT induction in the leaves and LFY and AP1 at the flanks of the IM. MADS-box, SPLs, AP2-like, and WRKY TFs have a preponderant role in flowering transition. SPL9 dual regulation on AP1 (positive and negative bars), implies that in the presence of DELLAs, AP1 is induced, but GA treatment drastically reduces it. Line intersections with dots indicate molecular interactions.
Also, DELLA proteins inactivate some of the WRKY TF family members implicated in flowering. WRKY75 and WRKY71 are direct regulators of FT, and WRKY71 also binds to LFY, although it is not clear if its TF activity depends on GA signaling [49][50]. Furthermore, WRKY12, in association with SPL10, induces MIR172B, while WRKY13 and SPL10 repress it [51]. Both of them interact with GAI and RGA-LIKE 1 (RGL1), and the degradation of these DELLAs by GAs enables WRKY12 to upregulate FUL expression directly and SOC1 indirectly [52]. Subsequently, FUL induces flowering partly in collaboration with SOC1 [53]. SOC1 and FUL suppress SVP repression over GA20OX2. Thus, by lowering the repressor activity of SVP, GA levels rise, reinforcing flowering transition [54]. SOC1 and AGL24 mutual induction is also enhanced in response to GA [55]. Finally, XAANTAL2 (XAL2) is another member of the MADS-box family involved in flowering, probably in response to GA and independently of SOC1, since the double mutant xal2-2 soc1-7 was unable to flower in response to GA3 treatment after 88 days under SD conditions [56].
GAs regulation of MADS-box genes leads to the induction of LFY expression [57]. However, GAs can upregulate LFY expression by an independent mechanism. MYB33 accumulates in the shoot apex in response to GA4 addition [58]. Furthermore, MYB33 binds to a highly conserved region in the LFY promoter [59].
The carbohydrates were long considered to be involved in the vegetative to reproductive transition [60]. However, the mechanisms by which sugars regulate flowering are not yet completely understood. Nevertheless, T6P signaling is critical for flowering transition regardless of day length [16]. T6P is produced from glucose-6-phosphate and uridine diphosphate (UDP)-glucose by the TREHALOSE-6-PHOSPHATE SYNTHASE 1 (TPS1) [61]. T6P cascade induces FT and its closest homolog TSF in a CO-independent manner [16]. Additionally, TPS1 is highly expressed in the IM, and its overexpression reverts the late-flowering phenotype of ft-10, suggesting that T6P acts independently or downstream of FT regulation [16].
Under SD photoperiod, T6P positively regulates the expression of SPL3/4/5 at the SAM in a partially independent manner of miR156 decreasing by aging [16]. However, there is also evidence that an increase in endogenous sugar levels represses miR156 [62][63].
The close relationship between SPL and MADS-box TFs, as well as their response to endogenous and environmental cues during plant’s phase transitions, strongly suggest that they are part of the same gene regulatory network (Figure 1). Moreover, it has been suggested that both groups of proteins act as pioneer transcription factors, binding, and opening inaccessible chromatin by recruiting chromatin remodeling complexes [64].

Day length and high permissible temperatures are important signals to induce flowering in A. thaliana. Detection of photoperiod relies primarily on CO protein, a B-box-type zinc finger TF with a CCT domain, that accumulates during the day in the vascular tissue [4]. CONSTITUTTIVE PHOTOMORFOGENIC 1 (COP1) and SUPPRESSOR OF PHYA-105S 1 (COP1/SPA1) complex ubiquitinates CO protein to be degraded by the proteasome at night. During the diurnal phase of long-day (LD)-photoperiod, cryptochromes 1 and 2, and phytochrome A are activated by blue and far-red light, respectively, inhibiting COP1/SPA1 activity. This action allows CO accumulation in the afternoon [65][66].

CO induces FT expression [18] which is translated and systemically travels from rosette leaves to the SAM to induce flowering [67][68]. Once they reach the SAM, FT interacts with the bZIP transcription factor FD via the 14-3-3 growth response factors [69]. Moreover, the FT-FD complex regulates the expression of SPL3/4/5 in the IM, and they directly or in association with FD upregulate FUL, LFY, and AP1 [70][71].

PHYTOCHROME INTERACTING FACTOR 4 (PIF 4) and its orthologs PIF5 and PIF7 are responsible for inducing FT and TSF expression in response to high temperature under short-day conditions [72][73]. Interestingly, at 27 °C, the H2A.Z-nucleosomes levels decreased at the FT locus, relaxing the chromatin and favoring the union of PIF4 to FT DNA [72]. It seems, therefore, that LD-photoperiod and high temperature are signals that can be separated, however, more research is required to establish their possible synergism.

The actual hierarchical flowering model proposed that different inputs converge into the integrators that transduce these signals to the FM identity genes [1]. Alternatively, we propose that endogenous signals can transversally dictate whether the plants remain in the vegetative phase or initiate the reproductive state. In this view, miR156, the DELLA proteins, and possibly low concentration of certain carbohydrates maintain the vegetative state, while miR172, GA, and T6P allow the reproductive phase change. Inductive signals like LD-photoperiod and temperature accelerate the flowering transition process in plants such as Arabidopsis, in part, by upregulating FT in the leaves and a group of the SPLs and MADS-box genes in the apical meristem. This ensures that flowering happens when the external conditions are optimal for those species.