Metformin is a first-line treatment for many people with type 2 diabetes mellitus (T2DM) and gestational diabetes mellitus (GDM) to maintain glycaemic control. Although metformin demonstrates beneficial and protective cardiovascular effects for the mother, evidence suggests metformin may not be favourable for the short and long-term metabolic health of the offspring. Metformin can cross the placenta and could have a role in fetal programming.

Diabetes and its effect on fetal health are significant to the developmental origins of health and disease (DOHaD) hypothesis. Globally, around 223 million women currently live with diabetes, 60 million of whom are of reproductive age [1]. In addition to pre-existing diabetes, gestational diabetes mellitus (GDM), a form of maternal diabetes typically first diagnosed during weeks 24–28 of pregnancy, currently affects around 1 in 6 births worldwide, equating to approximately 16.8 million pregnancies [1][2][3]. The diagnostic criteria for GDM vary widely in different countries and in turn have led to heterogeneity in screening and trial designs, making it difficult for comparative judgement and unified consensus on its effect on maternal and fetal health [4]. If maternal hyperglycaemia is poorly controlled, this accelerates intrauterine growth and increases the risk of macrosomia, in which birth weight is > 4 kg, or the fetus being born large for gestational age (LGA), in which birth weight is above the 90th percentile. This may cause birth trauma for mother and baby by increasing the risk of preeclampsia, neonatal hypoglycaemia, shoulder dystocia, late stillbirth, or the need for caesarean section or neonatal intensive care [5][6][7]. Although GDM ceases post-parturition, these women are predisposed to an estimated sevenfold increased risk of type 2 diabetes mellitus (T2DM) within 5–10 years post-pregnancy [8][9][10]. Diabetes currently represents 10% of the National Health Service budget and, with the ever increasing prevalence of diabetic pregnancies, including diabetic risk factors such as the obesity epidemic and advanced maternal age [11][12], it is now paramount to refine diagnostic and treatment strategies to improve outcomes for mother and baby.
Insulin therapy is a standard treatment for diabetes to restore glucose homeostasis; however, this therapy is associated with increased maternal weight gain and hypoglycaemia. As rates of diabetes continue to rise, the cost, storage, and administration requirements for insulin have proven to be of increasing concern [13][14], particularly in developing countries where these storage requirements may not be feasible [14]. As such, metformin has been advanced as an alternative first-line therapy for T2DM and GDM in many countries [15][16]. 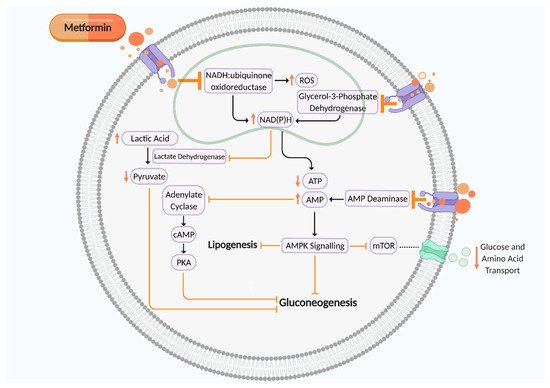 Figure 1. Putative mechanism of action of metformin on cellular metabolism and mitochondrial aerobic respiration to suppress gluconeogenesis. Metformin is an inhibitor of mitochondrial complex I (NADH:ubiquinone oxidoreductase), AMP deaminase, and mitochondrial glycerol 3 phosphate dehydrogenase (G3PDH), which all contribute towards suppression of cellular gluconeogenesis to maintain glycaemic control. ROS, reactive oxygen species; NAD(P)H, nicotinamide adenine dinucleotide phosphate; ATP, adenosine triphosphate; AMP, adenosine monophosphate; cAMP, cyclic AMP; PKA, protein kinase A; mTOR, mammalian target of rapamycin. Black arrows indicate cellular pathway. Orange arrows indicate putative effects of metformin. Figure created using Biorender.com.
Metformin’s glucose-lowering activity certainly demonstrates beneficial outcomes for maternal health, as it decreases maternal weight gain, inflammation, atherothrombosis, and cardiovascular disease mortality, all of which are diabetic co-morbidities [15][25]. However, studies suggest that its short- and long-term effects on the metabolic health of the offspring may not be as favourable.
Whilst metformin therapy has been shown to significantly reduce the incidence of LGA, it has been reported that it may decrease birth weight to the extreme as metformin use in pregnancy is associated with an increased rate of small for gestational age (SGA) births; that is, those with a birth weight below the 10th percentile or two standard deviations below the mean weight for gestational age [5][7][26]. Notably, SGA offspring exposed to metformin in utero have shown signs of ‘catch-up growth’ during childhood. In the Metformin in Gestational Diabetes: The Offspring Follow Up (MiG: TOFU) study, at two years of age, metformin-exposed offspring demonstrated higher subcutaneous adiposity and larger mid-upper arm circumferences and bicep and subscapular skinfolds than insulin-exposed offspring [27]. By nine years of age, they presented with significantly higher body mass index (BMI) and larger arm and waist circumferences, triceps skinfolds, and abdominal fat volumes compared to insulin-exposed offspring [28]. A follow-up study of children exposed to metformin in utero in pregnancy complicated by polycystic ovarian syndrome also revealed they had higher BMIs at four years old than placebo-treated pregnancies [29]. Another randomised controlled trial showed that infants exposed to metformin during GDM pregnancy were markedly heavier at 12 and 18 months of age compared to insulin-exposed infants [30]. A murine study examining the effects of gestational metformin exposure from days E0.5 to E17.5 also showed that dams exposed to metformin manifested lower fetal weight on E18.5 than untreated dams. When fed a high-fat diet later in development, metformin-exposed fetuses were heavier than untreated fetuses and demonstrated increased mesenteric fat and liver weight. These findings, combined with gene set enrichment analysis of differentially expressed genes in the metformin and untreated murine offspring, reveal that metformin may induce transgenerational effects by way of fetal programming [31]. Accordingly, these studies suggest that metformin therapy in pregnancy may increase the risk of childhood obesity and thus is likely to predispose offspring to cardiometabolic diseases during adulthood. It is therefore crucial to develop our understanding of metformin’s mechanistic activity and its effects on the balance between maternal health and adverse fetal outcomes.
Studies from the literature around the effects of metformin treatment on the placenta suggest that metformin alters placental gene expression and function (Table 1), although the mechanisms remain unclear.
Table 1. Current literature on the impact of metformin on placental gene expression and function [32][33][34][35][36][37][38][39][40][41][42][43].

As the interface between maternal and fetal circulations, the placenta transports nutrients to the developing fetus. There is also evidence that metformin is transported across the placenta to the fetal circulation. In metformin-exposed pregnancies, serum samples from umbilical cord, placental, and fetal tissues have demonstrated metformin concentrations to be equal or greater than maternal levels, suggesting active transport of metformin from the maternal circulation across the placenta and into fetal tissue [44][45][46]. Metformin is a hydrophilic cation, has a half-life of 5 h, and is not metabolised in humans, but recent evidence suggests that metformin bioavailability, volume of distribution, and clearance may be significantly increased in pregnancy, dependent on dose [47][48]. The mechanisms of how pregnancy alters metformin clearance remain to be established. Although metformin can cross the placenta, it is undetermined how metformin influences placental metabolism to influence gene expression and whether fetal tissues handle metformin in the same way.
The transporter responsible for metformin uptake from the maternal circulation into the placenta is yet to be determined and requires further research. Studies have reported norepinephrine transporter (NET), serotonin transporter (SERT), and organic cation transporter novel type 2 (OCTN2) to be localised on the maternal interface of the placenta at the syncytiotrophoblast apical membrane, which could be responsible [19][49][50][51]. OCT3 has been demonstrated to be the key transporter for fetal metformin uptake and distribution, localised on the fetal interface of the placenta at the syncytiotrophoblast basal membrane and fetal capillaries. Indeed, OCT3-/- pregnant mice show attenuated fetal metformin exposure [19]. However, it is apparent that placental OCT3 expression increases with gestational age, as a murine study demonstrated that placental OCT3 mRNA and protein expression increased by 37-fold and 56-fold, respectively, at day 15 of gestation, and by 46-fold and 128-fold, respectively, at day 19 [52]. Thus, it is possible that metformin may not be reaching fetal tissues with significant concentration until late gestation. Moreover, these findings suggest that, unlike insulin [13], metformin can cross the placenta [21][28] and reach fetal tissue, which could potentially influence fetal growth and programming.

2.2. Impact of Metformin on Placental Nutrient Transport and Nutrient Bioavailabilty

It has been demonstrated that metformin influences fetal growth and nutrient bioavailability by inhibiting mitochondrial complex I, leading to activated AMPK signalling and inhibition of placental mTOR signalling (Figure 1). Attenuated placental mTOR signalling is associated with restricted fetal growth [53]. This mechanism of action may potentially explain the significant relationship between SGA births and metformin exposure in pregnancy. mTOR is highly expressed in the human placenta syncytiotrophoblast layer and mTOR complex 1 (mTORC1) signalling plays a major role in placental nutrient sensing, thus significantly influencing fetal nutrient availability and metabolism. Trophoblast mTORC1 regulates System A and System L amino acid transporters for amino acid uptake, essential for fetal metabolism [54][55]. Preliminary in vitro models of human trophoblast cells with silenced mTORC1 have also demonstrated that placental mTORC1 may regulate a circulating factor or factors, which could influence fetal growth [55][56]. mTORC1 signalling is regulated by placental insulin and IGF I, and fetal glucose, amino acid, and oxygen levels. Diabetes may increase mTORC1 activation due to elevated maternal nutrient and ATP concentrations [54][55]. During early gestation, the embryo mainly expresses immature mitochondria. As gestation develops, the placenta and fetus increase their expression of mature mitochondria, which are more susceptible to metformin inhibition. With this in mind, it is possible metformin may not adversely affect offspring growth until after the first trimester [21].
Transplacental metformin exposure may restrict placental and fetal growth by reducing nutrient bioavailability which could influence fetal programming. Evidence suggests metformin can influence the status of several vitamins and micronutrients, including vitamins B1, B12, and D, folic acid, and magnesium [15][20][57][58][59][60][61][62]. Whilst all of these nutrients are important for fetal growth and development, folate and vitamin B12 are co-factors of one carbon metabolism, essential for cell growth, metabolism, and production of the methyl donor S-adenosyl-methionine (SAM). Furthermore, exposure to metformin and maternal deficiency of both folate and vitamin B12, during pregnancy, lead to similar changes to placental and fetal growth and offspring health [63][64][65][66][67]. We therefore postulated that a potential mechanism by which metformin influences placental and fetal growth and offspring risk of cardiometabolic complications is by affecting the balance between folate and vitamin B12 levels and, therefore, perturbing one carbon metabolism.