The principles and current clinical landscape of multispecific antibodies against cancer.

The tortuous, 2.5 billion-years-long path from immunoglobulin (Ig)-like domains of archaeal flagellins to the antibodies (Ab) of jawed vertebrates is one of the most intriguing discoveries in evolutionary biology [1][2][3]. Equally impressive are the accomplishments of modern genetic engineering, whose further variation of basic Ig building blocks could produce over 40 different molecular formats of therapeutic antibodies during the last two decades [4]. As times change, priorities shift, and pathogen defense has today largely been succeeded by a much more challenging task: the fight against cancer [5].
The concept that antibodies could be used as “magic bullets” against human maladies dates back to their discovery in the late 19th century [6] and the gradual recognition that they can bind a virtually unlimited number of antigens with a high specificity and affinity [7]. However, it was not until discovery of the “hybridoma” technology in 1975 [8], complemented by various humanization techniques a few years later [9], that scientists managed to harness this power: monoclonal antibodies could now be produced in large quantities after injecting a mouse (later, rat or other mammal) with the desired antigen, and fusing the respective splenocytes with suitable myeloma cell lines [10]. In the next step, two hybridomas were fused (“hybrid hybridoma”, aka “quadroma”) to produce bispecific antibodies without the protein denaturation steps necessary for chemical cross-linking, which could potentially adversely affect binding properties [11][12].
Improved function is the main incentive behind development of multispecific constructs. For every antibody, the “classic” mode of action falls into two broad categories: (i) “disruptive” with respect to the epitope-bearing target molecule, i.e., blocking or activating signals, neutralizing antigens, or causing internalization and degradation of surface receptors and (ii) “recruiting”, i.e., activating immune cells and/or other effector molecules, like the complement [13]. OKT3 (aka “muromonab-CD3”), for example, the first monoclonal antibody to ever achieve regulatory approval in 1986, is a typical product of the first category, used to suppress T-cell function in patients with glucocorticoid-resistant rejection of allogeneic renal, heart and liver transplants [14]. Rituximab, on the other hand, a CD20-specific monoclonal antibody still widely used since its approval in 1997, kills B- cells by combining signaling-induced death with cellular and complement-mediated cytotoxicity [15]. Compared to monospecific monoclonal antibodies, multispecific constructs potentiate antibody-mediated effects, for example, they can potentially “disrupt” multiple instead of one tumor-associated antigens (TAA) owing to more antigen-binding regions, and/or they can “recruit” and activate immune cells even stronger, since they use dedicated antigen-binding sites for this. The functional augmentation facilitated by multispecificity is clinically relevant: it translates into improved response rates, for example, approximately 50% with the newer anti-CD20/CD3 bispecific antibodies as monotherapy in B-cell non-Hodgkin’s lymphomas (B-NHL) which do not respond to rituximab any more [16], can delay development of resistance, and simplifies drug development compared to the more complicated, expensive and time-consuming procedures necessary for launching of multiple monospecific products instead [4].
Wide adoption of genetic engineering facilitates today’s exploitation of the huge potential inherent in multispecific antibodies: suitable polypeptide chains are designed in silico and expressed in various host systems, most frequently CHO cells and E. coli, followed by purification and assembly of the various components in vitro [17][18][19]. Appropriate antigen-binding properties, high yield, high thermal and chemical stability, good solubility, and low viscosity have key importance for large-scale production and clinical applicability [20][21]. The biochemical basis of these characteristics and our ability to manipulate them lie rooted in the modular antibody structure (Figure 1a). 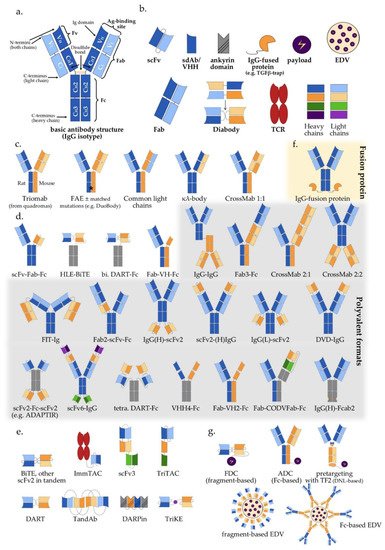 Formats are ordered as in Figure 1 and the corresponding sections of the main text; C: classical mode of action; R: immune-cell redirecting; for the explanation of other abbreviations, please see the main text; * one binding site does not rely on typical antigen-antibody interaction; ** human VH or VHH; # with payload; $ Figure 1e.

2. Antibody Structure and Approaches to Multispecificity