The members of the Lemur Tyrosine Kinases (LMTK1-3) subfamily constitute a group of three membrane-anchored kinases. They are known to influence a wide variety of key cellular events, often affecting cell proliferation and apoptosis. They have been discovered to be involved in cancer, in that they impact various signalling pathways that influence cell proliferation, migration, and invasiveness.

Protein phosphorylation is one of the most common post-translational modifications. The dynamic process of phosphorylation is mediated by protein kinases, whose catalytic activity consists in the reversible phosphorylation of specific amino acid residues. This biochemical modification, where a phosphate group is donated by the high-energy ATP molecule, profoundly modifies the accepting protein substrate [1]. Such a modification introduces a charged, bulky, hydrophilic group (the phosphate) in the side chain of specific amino acids of the target protein, changing its conformation and interaction capability.

Together with the de-phosphorylation reactions, catalysed by specific phosphoprotein phosphatases, protein kinases contribute to many critical events in cell fate determination, cell cycle control, and signal transduction. Just as importantly, kinase deregulation is often associated with metabolic deregulation as well as several diseases. Therefore, over the last decades, protein kinases and phosphatases, both expressing a relevant regulatory potential in cell signalling, have become important targets for the pharmaceutical industry. Consistently, several kinase databases and resources provide up-to-date information on human kinome in physiological conditions and in association with diseases, as well as on the progress of kinome therapeutics [2].

Protein kinases have evolved to generate different kinase families, distinct in sequence, structure, and specificity [3][4]; the Tyrosine Kinase (TK) family stands out among them as a major research focus. In fact, members of the TK family, which exhibit a significant association with diseases, have been successfully targeted by chemical inhibitors. This is the case of Receptor Tyrosine Kinases (RTKs), regulatory signalling proteins governing cancer growth and metastasis. In physiological conditions, cell surface RTKs are activated when their extracellular domain is engaged with its ligand, typically a growth factor, thus inducing receptor dimerisation and tyrosine kinase activity [5][6][7]. RTKs auto-phosphorylate tyrosine residues in their cytosolic region, and engage many downstream signalling proteins, activating signal cascades that regulate cell replication, growth, differentiation, and survival [8]. Instead, in cancer cells, oncogenic alterations of RTKs (caused by mutations, genomic amplification, and chromosomal rearrangements) result in aberrant RTKs activation and downstream signal transduction, disrupting the balance between cell proliferation and cell death [6][8]. Since RTKs play crucial roles in cancer development, they represent molecular therapeutic targets for cancer treatment. In fact, many small molecule inhibitors have been developed for malignancies associated with mutated RTKs [7][8][9][10]. By targeting the ATP binding site (or an adjacent region), they specifically inhibit the tyrosine kinase function, prevent the phosphorylation of intracellular signal molecules, and block intracellular signal pathways that favour tumorigenesis. RTKs FDA-approved inhibitors, updated as of 18 August 2019, and their use in oncology has been accurately discussed by Pottier and co-workers [9]. Despite their success in cancer chemotherapeutics, acquisition of resistance to RTKs inhibitors inevitably develops. This is mainly attributed to RTK secondary mutations, which prevent the inhibitor from binding to the ATP pocket. To reduce drug resistance, recent approaches have been based on second- and third-generation RTKs inhibitors resistant to mutations, as well as on the combined use of synthetic with naturally derived RTKs inhibitors [7][11][12]. Another approach for targeting RTKs is based on monoclonal antibodies directed against the extracellular domains of the receptor, and aimed at interfering with RTK activation; their use has also been proposed in combination with tyrosine kinase inhibitors of the same RTK target [6][13].

Despite the importance of kinases in physiological conditions and their frequent mutation in disease, there is a substantial section of the human kinome that has remained little studied, up until now. This is what emerged from the NIH Illuminating the Druggable Genome (IDG) Program, aimed at identifying and providing information on proteins that are currently not properly studied within commonly drug-targeted protein families [14][15].

The members of the Lemur Tyrosine Kinases (LMTKs) subfamily, located at a recent branch of kinase evolution, are on the list of the protein targets identified by the IDG Program for additional research (last updated on 11 June 2019). The published research studies on Lemur Tyrosine Kinases (n = 53 articles can be found in PubMed) of the last decade have mostly been dedicated to cancer and neurodegeneration investigations.

LMTKs comprise a novel group of three membrane-anchored kinases that, through a complex interactome network, regulates a wide variety of key cellular events, often impacting cell proliferation and apoptosis [16]. Current functional data support the hypothesis that LMTKs may regulate endosomal cargo recycling and move steroid receptors from the endocytic recycling compartment to the nucleus, where they can regulate the transcription of specific receptor-activated genes [16]. Although solid experimental evidence has substantiated various molecular functions of LMTKs, this protein kinase subfamily remains incompletely characterised.

The roles played by LMTKs in the cytosol and in the nuclear environment range from cell signalling and membrane trafficking to gene expression, explaining why their dysregulation can be associated with cancer [16][17]. A change in LMTK expression or protein level has been observed in different cancers, reflecting either positive or negative correlation dependent on cancer type. For example, LMTK2 protein level is high in colorectal and ovarian cancer, but is low in lymphoma, lung, testis, prostate, and renal cancer [17]. These findings suggest that LMTK level has the potential to be used as a diagnostic/prognostic biomarker. For instance, LMTK3 expression turned out to be a negative prognostic factor in patient with gastric cancer; its overexpression in bladder cancer was correlated with bladder cancer malignancy and predicted poor survival [18][19].

Many studies argue that LMTK proteins represent new potential targets for cancer therapy. Conti and co-workers showed that LMTK2 silencing sensitises immortalised epithelial and cancer cells to TNF-related apoptosis-inducing ligand (TRAIL) cytotoxicity, by regulating the levels of anti-apoptosis BCL2 family members [20]. Similarly, knockdown of LMTK2 inhibited the proliferation of colon cancer cells by inactivating nuclear factor-κB (NF-κB) [21], while LMTK2 silencing repressed the proliferation and invasion of hepatocellular carcinoma cells in vitro through the inhibition of Wnt/β-catenin signalling [22]. All these findings suggest that LMTK2 inhibition might represent a valuable approach in the treatment of specific cancers.

The search for LMTK proteins inhibitors is ongoing. An ATP-competitive, LMTK3 small-molecule inhibitor has been identified by a high-throughput screening of a library of kinase inhibitor-biased compounds against the recombinant form of the catalytic domain of LMTK3. Biochemical, biophysical, and cellular assays contributed to the identification and characterisation of this inhibitor. Inhibition of LMTK3 decreased the proliferation of different human cancer cell lines, with a concurrent increase in apoptosis in breast cancer cell lines [23]. These findings pave the way for further development and optimisation of LMTK3 inhibitors.

The three structurally and evolutionary related Lemur Tyrosine Kinases, namely LMTK1, LMTK2, and LMTK3, constitute a family of regulated specific kinases that performs a diversified set of cellular functions, mainly involved in cell signalling and membrane trafficking [16]. Sequence homology with the kinase domain of Receptor Tyrosine Kinases (RTKs) suggested a tyrosine kinase catalytic activity for LMTK1 [24]. On the contrary, in vitro assays showed that LMTK2 exhibited only serine/threonine kinase activity in autophosphorylation reactions or with added substrates [25], disclosing the phospho-acceptor capability of this enzyme, as well. By analogy, LMTK1 and LMTK3 are to be regarded as serine/threonine kinases. Recent efforts to decipher LMTK3 consensus phosphorylation motif by using a positional scanning peptide library revealed a consensus sequence with a strict requirement for Arg residues at positions −3 and/or −2, and allowed for the design of an optimal LMTK3 peptide substrate, Ser as the phospho-acceptor site [23]. The authors claim that a similar approach using a Tyr residue as a phospho-acceptor site would be worth exploring, as LMTK3 is predicted in silico to have dual phospho-specificity (serine/threonine and tyrosine). Because of these different findings, the name Lemur Tyrosine Kinase does not precisely reflect the kinase property of this family of proteins and might be substituted with Lemur Tail Kinase, as suggested by some authors [26].

To highlight the correlations between LMTKs, we extracted the information regarding their residues involved in ATP binding/orienting and in the phospho-transfer reaction, together with the different protein and gene names of the three LMTKs from the UniProt Knowledgebase (UniProtKB) database [27];

According to The Human Protein Atlas, LMTK2 is almost ubiquitously expressed in human tissues, with evidence at protein level, while LMTK1 is and LMTK3 are expressed in many tissues, with evidence at protein level only in some of them [28]. LMTK2 and LMTK3 are predominantly anchored to cytoplasmic endo-membranes, although they were also detected in the nucleus [29].

LMTK proteins share an overall structure made of a N-terminal signal peptide, a transmembrane domain comprising one or two transmembrane elements, a highly conserved kinase domain, and a long C-terminal tail, reminiscent of the long tail of Lemurs [16]. Originally, the determination of the membrane topology was performed with LMTK2. Briefly, in fluorescence protease protection assays and by using Human Embryonic Kidney cells (HEK293 cells) transfected with LMTK2 tagged with GFP at either the -NH3+ or -COO− terminus, LMTK2 was proved to be an integral membrane protein in which both the amino and carboxyl termini are exposed to the cytoplasm. This topology also locates the kinase active site within the cytoplasm [16][30].

Similar studies have not been performed with LMTK1 and LMTK3; therefore, their membrane topology can only be predicted on the basis of available data [27][31]. As an example, Figure 1 shows the protein sequence, the transmembrane topology, and the annotations of LMTK3 extracted from UniProtKB; data were processed using the Protter web-based tool (http://wlab.ethz.ch/protter) [31] to produce the topology plot and orientation of LMTK3 (Figure 1). Figure 1a,b highlight: 1. the transmembrane region with a unique transmembrane element; 2. the conserved kinase domain, comprising the ATP binding region, the ATP binding site, and the proton acceptor active site; 3. the long C-terminal tail domain that constitutes the largest segment of the protein structure; 4. the cytoplasmatic localisation of both the kinase domain and the C-tail domain. The three-dimensional structure of the kinase domain of LMTK3 (Figure 1c) was retrieved from the SWISS MODEL Database (protein ID: 6seq.1). To date, this is the only domain of LMTKs whose structure has been solved (at 2.1-Å resolution), using X-ray diffraction and by studying a recombinant protein comprising the residues 134 to 444 [23]. The structure of the LMTK3 kinase domain shares structural and sequence similarities to different kinase domains, such as those of the transmembrane receptor epidermal growth factor receptor (EGFR), insulin receptor (INSR), and Janus kinase (JAK) [23]. This structural achievement is fundamental for further structural/functional studies and for facilitating the structure-based design of inhibitors that could help in the dissection of the signalling pathways in which LMTK3 is involved. 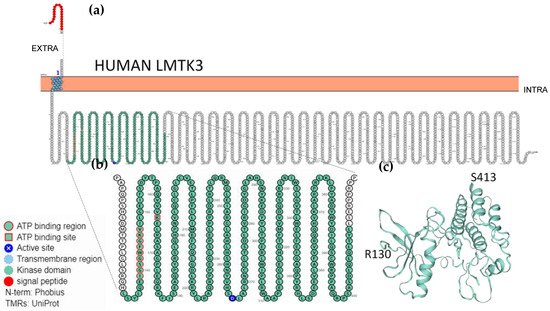 Figure 1. Sequence, predicted transmembrane topology, and kinase domain of human LMTK3. (a) Topology plot visualising the N-terminal signal peptide, the transmembrane region (blue), and the kinase domain (green), followed by the C-terminal tail domain. (b) An enlarged view of the catalytic kinase domain, evidencing the functional annotations associated with LMTK3_HUMAN UniProtKB entry and listed in the flanking legend. N-terminus location is predicted by Phobius server, while transmembrane regions (TMR) are derived from UniProt annotation. (c) Three-dimensional structure of the kinase domain, as displayed in SWISS MODEL Database (protein ID: 6seq.1).