Zika virus (ZIKV) is an emergent arthropod-borne virus whose outbreak in Brazil has brought major public health problems. Infected individuals have different symptoms, including rash and pruritus, which can be relieved by the administration of antiallergics. In the case of pregnant women, ZIKV can cross the placenta and infect the fetus leading to congenital defects. We have identified that mast cells in the placentae of patients who had Zika during pregnancy can be infected. This led to our investigation on the possible role of mast cells during a ZIKV infection, using the HMC-1 cell line. We analyzed their permissiveness to infection, release of mediators and ultrastructural changes. Flow cytometry detection of ZIKV-NS1 expression 24h post infection in 45.3% of cells showed that HMC-1 cells are permissive to ZIKV infection. Following infection, β-hexosaminidase was measured in the supernatant of the cells with a notable release at 30 min. In addition, an increase in TNF-α, IL-6, IL-10 and VEGF levels were measured at 6h and 24h post infection. Lastly, different intracellular changes were observed in an ultrastructural analysis of infected cells. Our findings suggest that mast cells may represent an important source of mediators that can activate other immune cell types during a ZIKV infection, which has the potential to being a major contributor in the spread of the virus in cases of vertical transmission.

Zika fever is an important Arbovirus-caused disease that has surfaced in numerous countries in Asia, Africa and America [1]. The etiological agent of this disease, Zika virus (ZIKV), was initially isolated in 1947 from the blood of sentinel Rhesus monkeys during a study on yellow fever transmission in the Zika forest of Uganda, which gave rise to its name [2][3]. Transmission of the ZIKV is primarily through bites of infected Aedes mosquitos, with the most common vectors being Aedes aegypti and Aedes albopictus, but it can also happen by vertical transmission [4]. As a result of vertical transmission, there were alarming cases of Congenital Zika Syndrome, as the virus could cause damage to the placenta, infect placental cells and reach the fetus [5]. A ZIKV particle has a diameter of 25–30 nm and is a member of the Flaviviridae family that shares many similarities with other more widely known related viruses such as dengue, West Nile, Japanese encephalitis and yellow fever [6]. It has a single-stranded RNA genome with a positive polarity of 11 Kb and encodes a polyprotein precursor that is processed into the structural proteins such as capsid (C), pre-membrane (prM) and envelope (E) along with seven non-structural proteins (NS1, NS2A, NS2B, NS3, NS4A, NS4B and NS5) [7][8]. 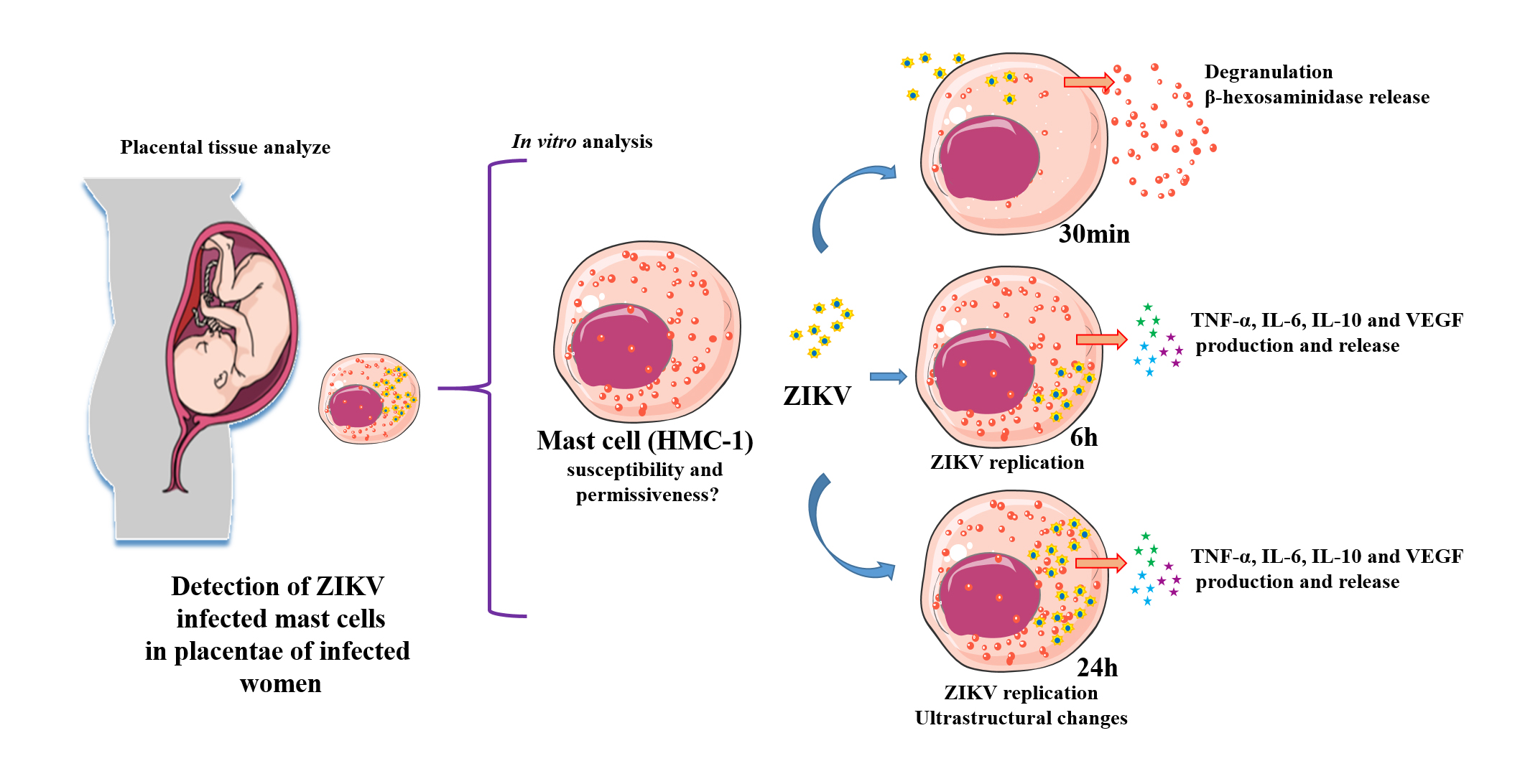 Mast cells are resident immunological cells found abundantly in tissues such as skin, endometrium and placenta that have prominent roles in immunologic reactions [9][10][11]. Their presence and prevalence in these tissues, along with their proximity to blood vessels, predispose these cells to be among the first immune cells that can be infected by ZIKV after a mosquito bite penetrates the skin. As some of the most frequent symptoms of zika are rash and pruritus, which are relieved by the administration of antiallergic drugs (anti-histamines), this has led us to believe that mast cells can play a role, although not yet elucidated, in the pathogenesis of the disease [12][13][14]. We hypothesize that it may be one of the cells involved in placental infections, which can directly contribute to vertical transmission.

Although there are no studies in the literature that have investigated the involvement of mast cells in a ZIKV infection to date, mast cells have a proven role in infections by dengue, another Arbovirus. Several products originating from mast cells are found at high levels in patients infected by dengue, especially those with plasma leakage [15][16]. While mast cells are permissive to dengue infection, it is most probable that they display a low level of the specific receptors required since the quantity of virus necessary to successfully infect this cell type is always higher than is needed for macrophages and dendritic cells [15][17][18].

HMC-1 cells are a lineage of human mast cells that characteristically express the cytokine receptor c-Kit abundantly and release different cytokines after degranulation stimuli. This cell line possesses the features necessary to serve as an in vitro model for the development of studies on mast cells [19]. HMC-1 has been widely used in studies on degranulation studies, endothelial activation and its interaction with other arboviruses [20][21].