Weeds can be defined as any plant that is objectionable or interferes with the activities or welfare of humans. In a crop production system, weeds compete for the same resources as the crops, such as water, nutrients, sunlight, and space, limiting crop productivity. Aggressive weed competition reduces crop yield significantly and adds further cost to crop production owing to their management. Yield loss due to weeds depends on several factors such as density, time of emergence, type of weed, and crop type.

Globally, up to 40% yield loss has been reported due to weeds [1]. In the USA, yield loss because of weeds has been estimated to exceed eight dollar billion annually [2]. Among US crops, corn and soybean suffer the highest aggregate production loss because of weeds. On average, across 2007–2013, weed interference caused 52 and 50% yield loss in soybean and corn, respectively, in the USA and Canada [3][4]. In Australia and India, annual yield losses due to weeds in grain crops were estimated to be 2.52 and 11 billion USD, respectively [5][6]. China reported a grain loss of approximately 3 million metric tons each year because of weeds [7]. These data indicate that weeds continue to be a major threat in crop production, causing substantial economic and yield loss worldwide [8].
In developing countries, subsistence farming is the primary form of agriculture, and weeds are generally managed through hand-weeding. However, due to increasing urbanization, increased labor costs, and decreasing workforce in agriculture, people are moving towards using chemicals for controlling weeds. In Southeast Asian countries such as Nepal, Bhutan, Bangladesh, and Thailand, there has been an increase in the haphazard use of herbicides for weed control in subsistence farming systems leading to health and environmental concerns [9][10]. In developed countries such as the USA, China, and Brazil, farmers are engaged in specialized agricultural production systems with the increased use of synthetic fertilizers and herbicides. The top ten consumers of pesticides globally are China, USA, Argentina, Thailand, Brazil, Italy, France, Canada, Japan, and India [11]. In 2014, approximately 2 million tons of chemical pesticides were used in the agricultural sector globally, of which 47.5% constituted herbicides [12]. Over-reliance on herbicides to control weeds and injudicious use of herbicides has led to several issues such as herbicide-resistant weeds, herbicide drift, environmental and health problems, and extinction or population reduction of segetal species [13][14][15]. Currently, there are approximately 500 unique cases of herbicide-resistant weeds globally [13]. Among the global herbicide-resistant weed cases, most were reported in the USA, followed by Australia, Canada, China, and Brazil [13]. In addition to this, some weeds have developed resistance to multiple modes of action while others have (developed decreased sensitivity to herbicides [16][17][18]. Both target-site and non-target-site mutations in the herbicide-resistant weeds have been reported [19][20]. These observations indicate over-reliance on herbicides as a non-sustainable measure for weed control. The development of herbicides with novel modes of action is imperative for herbicide resistance management; however, no new mode of action has been developed in the past three decades [21].
Further, there have been increasing reports of crop damage because of herbicide drift in recent years. For instance, 2,4-dichlorophenoxyacetic acid (2,4-D) is one of the most used herbicides to control broadleaf weeds in agriculture; however, they often damage the neighboring 2,4-D sensitive cotton field resulting in the loss of millions of dollars in the USA and Australia [22]. Likewise, severe crop injury has been reported due to the off-target movement of dicamba to the neighboring fields with non-dicamba tolerant crops [23][24]. Further, the increasing use of herbicides has led to the accumulation of agricultural contaminants such as arsenic, cadmium, lead, and mercury in soil and water resources [25]. In the USA, a survey of 51 major river basins by the US Geological Survey reported that pesticides were detected in 97% of the samples from streams near agricultural areas [26]. Short and long-term health effects from exposure to agricultural chemicals have also been documented [27][28]. These examples provide evidence that over-dependence on herbicides may result in the increased frequency of herbicide resistance in weeds, water and soil pollution, and herbicide drift. Thus, to mitigate and/or eradicate ecological, environmental, and social externalities associated with intensive use of herbicides, it is imperative to design and promote alternative weed management approaches.
Studies have suggested that increasing crop diversity can subject weeds to a greater number of stresses and reduce reliance on external chemicals for weed/pest control [29][30]. Crop diversification can be defined as the conscious inclusion of functional biodiversity at the temporal and/or spatial levels to improve the productivity and stability of ecosystem services [31]. The concept of crop diversification is complex, and a diversified cropping system is more complicated with different crop combinations, unlike monoculture, where extensive farmlands are cultivated with one or two annual crops. Modern agricultural practices have simplified the agricultural systems to enhance the profitability of major crops or livestock. In contrast, a diversified cropping system focuses on creating sustainable, resilient, and socially just global food systems. Some of the examples of a diversified cropping system would be (i) multiple genotypes of the same crop or different crops grown in polyculture [31], (ii) inclusion of legumes in otherwise cereal dominated systems [31] and, (iii) temporal and spatial rotation of crops, including but not limited to cover crops, trap crops, hedgerows, fallow fields, etc. [31]
There are a certain set of rules on which crops to choose in a diversified farming system (for, e.g., Liebman and Dyck talks about strategies for crop rotation and intercropping in the context of weed management [32]). The consequences of diversification include, but are not limited to, increased soil nutrient recycling, pest and disease suppression, enhanced water use efficiency, and pollination [33]. Many of the previous studies have advocated the importance of crop diversification in sustainable agricultural production [34][35]. However, knowledge of how different crop diversification techniques impact weed management and the constraints of adopting crop diversification in the modern agricultural context is lacking [36].

Liebman and Staver [29] noted two general principles for weed management through crop diversification, (a) weeds should be subjected to various stress and mortality factors by using crop sequences containing different species and management practices, and (b) diversification methods should be designed to maximize the capture of light, nutrients, and water by crop, thus reducing the loss by weeds. These principles should be the foundation for any crop diversification methods (e.g., crop rotation, cover cropping, and intercropping). However, the objective of the diversification strategies is not to eliminate all the weeds, instead to control them. Weeds offer various ecosystem services, which sometimes are beneficial to crops and humans [37][38][39][40][41][42].

Crop rotation is the practice of growing a series of crops sequentially over time on the same land, thus providing temporal variability [43]. Crop rotation is a sustainable agricultural practice aimed at achieving high economic output with minimum possible cost [44]. Zhao et al. [45] recently performed a meta-analysis on 45 studies and reported a 20% increment in crop yields due to crop rotation. Moreover, another meta-analysis on 54 studies showed that crop rotation leads to a 49% reduction in weed density [46]. Thus, crop rotation helps to reduce weed pressure and increase crop yield.

Intercropping is an integrated weed management practice in which two or more crop species or genotypes are cultivated together and coexisting for a time. It is commonly used in countries with low-input (high-labor) and resource-limited agricultural systems on a small piece of land [47][48]. Intercrops can broadly be divided into three types: (a) relay intercropping (planting a second crop before the first crop is mature), (b) mixed intercropping (simultaneously growing two or more crops), and (c) strip cropping (growing two or more crops simultaneously in strips) Figure 1 [49]. Each type has its benefits, but overall intercropping compared with monocrops provides a similar yield with reduced inputs, pest control (weeds, diseases, and insects), and stable aggregate food yields per unit area [50][51]. 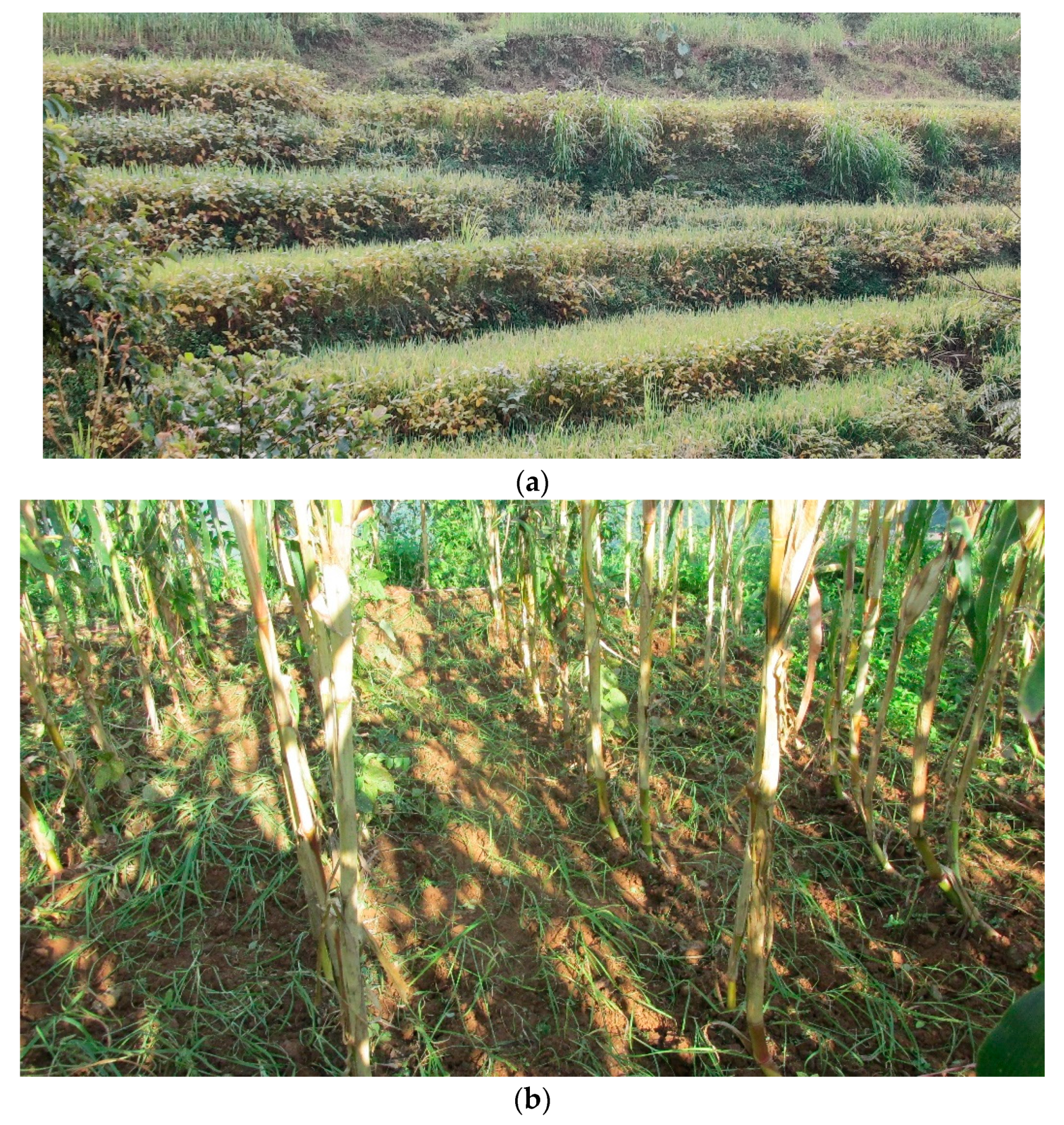 Figure 1. (a). Intercropping of blackgram and rice (Oryza sativa L.) on step farm in Nepal, (b). Corn intercropped with ginger (Zingiber officinale L.).

Cover crops are crops planted between the growing seasons to improve soil health, reduce soil erosion, suppress weeds and other pests [52][53]. Cover crops suppress weed growth by multiple mechanisms such as competition for light, space, water, and nutrients [54]. After the termination of the crop, it forms a mulch layer on the soil surface, which is proven to reduce weed germination, emergence, and establishment [55][56][57]. Furthermore, cover crops and associated mulch have been shown to release allelochemicals, which further suppress weed growth [58]. A recent meta-analysis on 15 studies covering crop treatment in corn-soybean rotations showed that cover crop helps significantly reduce the weed biomass, but without changing the weed density. Moreover, to achieve a 75% reduction in weed biomass, it requires at least 5 mg ha−1 of the cover crop [59].
Cover crops require adequate soil water, moderate temperature, and good seedbed preparation for quick emergence and robust growth [60]. Therefore, the selection of the cover crops depends on field conditions, desirable outcomes, and cost. For instance, 759 farmers were surveyed in North Carolina about the perception of cover crops, and 46% of them cited time and labor involved in cover crops as a reason not to adopt it [61]. Moreover, they reported 28.1% of farmers are using cover crops to control weeds. Additionally, Osipitan et al. [62] reported in a meta-analysis of 53 studies that grass cover species provide greater weed suppression compared to broadleaf; fall-sown cover crops provide higher weed suppression than spring-sown cover crops. Moreover, weed suppression increased by increasing the seeding rate of the cover crop from 1 to 3. Thus, cover crop selection and management practices should be meticulously selected while considering cost and labor.

Despite high yields and low input cost, the modern monoculture system relies heavily on chemicals for weed control generating human health, environmental and ecological concerns. Herbicide-resistant weeds, increasing health issues associated with agricultural chemicals, water and soil pollution are among the major negative impacts of modern agriculture. New and innovative strategies for sustainable weed management are imperative for sustainable weed management before irreversible damage to humans and the environment. The best strategy for developing a resilient and sustainable production system is adopting diversified farming with ecological weed management options. However, farmers are reluctant to adopt a diversified cropping system because of the requirement of varying skill sets and higher initial investment. Efforts must be taken by both government agencies and the private sectors to promote diversified farming among the commercial and small-scale farmers for developing sustainable farming systems in the future.