Hypoxia, a common feature of solid tumors, greatly hinders the efficacy of conventional cancer treatments such as chemo-, radio-, and immunotherapy. The depletion of oxygen in proliferating and advanced tumors causes an array of genetic, transcriptional, and metabolic adaptations that promote survival, metastasis, and a clinically malignant phenotype. At the nexus of these interconnected pathways are hypoxia-inducible factors (HIFs) which orchestrate transcriptional responses under hypoxia. We discuss mechanisms and pathways, such as HIF signaling, mitochondrial dynamics, exosomes, and the unfolded protein response, that contribute to hypoxia-induced phenotypic changes.

Understanding the mechanisms by which cells sense oxygen and maintain oxygen homeostasis is of pivotal importance for science and medicine. Only in recent decades have breakthrough discoveries of mechanisms for eukaryotic oxygen sensing been made. In response to changing oxygen concentrations, cells maintain intracellular oxygen homeostasis in a myriad of ways such as mRNA reprogramming, metabolic alterations, reoxygenation via angiogenesis, and avoidance of toxic anaerobic by-products [1]. Oxygen levels can affect the stability of enzymes and other proteins which in turn affect transcriptional responses. The discovery of oxygen-sensing mechanisms has not only generated life-saving therapeutic advancements for cancers, cardiovascular conditions, and renal diseases but also earned Drs. Gregg Semenza, William Kaelin Jr., and Peter Ratcliffe the 2019 Nobel Prize in Physiology or Medicine [2].
Despite modest decreases in mortality rates over recent years, cancer continues to be a burdensome national health issue and the second leading cause of death in the U.S. [3]. Solid tumors in particular are associated with poor clinical prognosis because of systemic metastases and local resistance to anti-cancer therapies. Hypoxia, a condition in which oxygen levels are lower than normal physiological oxygenation of tissues (4–9%), is a hallmark of solid tumors and an indicator of poor prognosis in many cancers including prostate, cervix, breast, head and neck cancers [4]. Hypoxia generally ranges from 1–2% O2 but depends on the tumor size, stage, initial oxygenation level, and method of oxygen measurement [5][6]. Tumor physiology and distance to tumor microvessels can influence the extent of hypoxia; some areas can be anoxic (0% oxygen) or severely hypoxic (around 0.2% oxygen).
There are also different types of hypoxia; for instance, chronic or diffusion-limited hypoxia is defined by a continual state of hypoxia because of the inability of oxygen to diffuse to metabolically active cells. Cycling hypoxia (also known as intermittent or transient hypoxia) is characterized by cyclical fluctuations of acute hypoxia and reoxygenation [7]. Intra-tumoral acute hypoxia is typically induced by the temporary absence or restriction of blood supply [8]. Oxygen homeostasis is maintained in normal tissues through a balance of oxygen supply and demand, but in proliferating tumors, oxygen demand exceeds supply, such as through metabolic reprogramming. Consequently, chaotic angiogenic signaling leads to rapid, disorganized blood vessel formation, mediated by vascular endothelial growth factor (VEGF) [7].
Research on cancer hypoxia has spanned decades, driven by numerous research groups, and there have been inconsistencies in the in vitro experimental conditions of acute, chronic, and cycling hypoxia induced under [9]. For instance, acute hypoxia has been studied through exposing cells to continuous hypoxia from a few minutes to 72 h [9][10][11]. In addition, the in vitro experimental methods of acute and chronic hypoxia may not recapitulate in vivo complex hypoxic tumor conditions. In vitro and intra-tumoral hypoxia also result in distinct gene expression signatures [12], complicating extrapolations of results from hypoxic culture experiments to in vivo and clinical settings. Due to these discrepancies, there is no clear consensus on the biological consequences of chronic hypoxia, with one study reporting chronic hypoxic cells demonstrating higher invasiveness than cells exposed to acute hypoxia [13] and another reporting that chronic hypoxia leads to regressive changes [14]. These differences may be attributed to the usage of different cell lines and variable cell states at induction of hypoxia.

2OGDDs are a diverse superfamily of enzymes (e.g., prolyl hydroxylases, JmjC (Jumonji C) domain histone lysine demethylases (KDMs), ten-eleven translocation (TET) DNA hydroxylases, and RNA demethylases such as FTO and ALKBH1-3, 5) that facilitate numerous biological processes, including the HIF-mediated response to hypoxia, ECM formation, DNA and histone modifications, and normal and cancer cell metabolism. 2OGDDs hydroxylate their substrate with the assistance of oxygen, 2-oxoglutarate, and Fe2+ and produce succinate in the reaction [58]. In the canonical response to hypoxia, a specific class of 2-OGDDs, prolyl hydroxylase domain proteins, hydroxylate prolyl residues of HIF (Pro402 and Pro564 in HIF-1α; Pro405 and Pro531 in HIF-2α; Pro492 in HIF-3α) which enable the von Hippel-Lindau protein to ubiquitinate HIF-α and tag it for degradation by proteasomes [59]. While dysregulated 2OGDDs have been implicated in many cancers, cancer-related metabolic alterations can also influence 2OGDDs. PHDs (or EglNs) are inhibited by oncometabolites succinate and fumarate, which accumulate under hypoxia, and 2OGDDs can also be targets of HIF signaling.
Various 2OGDDs have been linked to the development of the CSC phenotype and chemoresistance. PHD2 (EglN1) is inhibited by TGF-β a major factor for EMT and metastasis, resulting in the stabilization of HIF-1 and the enhancement of EMT pathways [60]. In addition, PHD1 (EglN2) inhibition and silencing sensitizes colorectal cancer cells to 5-FU chemotherapy [61]. KDM5A and KDM5B are associated with transcriptomic heterogeneity and therapy resistance in luminal breast cancer and melanoma [62][63]. Loss of KDM6A, a known tumor suppressor, contributes to histone hypermethylation, a phenomenon common in hypoxic tissues, and was found to prevent cellular differentiation under hypoxia, independently from HIF [64]. Likewise, KDM6A and KDM5C are often mutated in ccRCC (3% and 8% of tumors, respectively) [65][66]. KDM6A is also mutated in numerous solid tumors such as bladder cancer, prostate cancer, and breast cancer [67], and depletion of KDM6A led to increased expression of EMT transcription factors, Snail, ZEB1, and ZEB2 [68]. ALKBH5, an m6A RNA demethylase, is responsible for a HIF-1-mediated increase in NANOG expression and the induction of a CSC phenotype in breast cancer [69]. Overall, targeting oncogenic 2OGDDs has potential to not only inhibit tumor growth and CSC features but also enhance existing anticancer therapies. 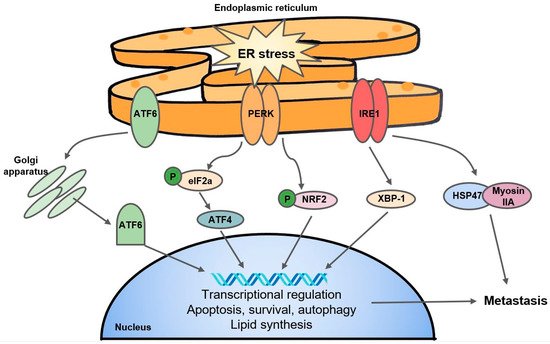 Figure 1. A simple schematic of the UPR. The three major arms of the UPR consist of ATF6, PERK, and IRE1. ATF6: activating transcription factor; PERK: PRKR-like endoplasmic reticulum kinase; IRE1: inositol-requiring enzyme 1; eIF2a: eukaryotic initiation factor 2a; NRF2: Nuclear factor erythroid 2-related factor 2; XBP-1: X-box binding protein 1; HSP47: heat shock protein 47.
Mechanistically, PERK interacts with and phosphorylates eukaryotic initiation factor 2a (eIF2a) which regulates translation of downstream effectors such as activating transcription factor 4 (ATF4). The PERK-ATF4 branch is known to trigger CREB3L1 activity which contributes to metastasis and EMT in breast cancer [73]. The PERK-eIF2a arm of the UPR has been linked to hypoxic cancer cell survival and tolerance to radiotherapy in a colorectal cancer cell line through a mechanism of glutathione synthesis and mitigation of the effects of ROS [74]. Separately, Yoneda et al. demonstrate that IRE1, another UPR transducer, facilitates the interaction of HSP47, a chemical chaperone, with non-muscle myosin IIA, contributing to aggressive metastasis in breast cancer [75]. The expression of XBP-1, another substrate of IRE1, was found to drive TNBC growth and invasiveness, and correlated with hypoxia-mediated HIF-1α gene signatures [76]. Interestingly, the IRE1-XBP-1 axis is also responsible for the downregulation of c-Myc and activation of NK cells which protected against melanoma [77]. In addition, the fact that UPR inhibitors such as 4-PBA and TUD-CA can stall tumor growth and metastasis [78] suggest that the UPR pathway may present as a potential anticancer target. Interestingly, researchers have found that KDM1A inhibitors are able to induce differentiation in glioma stem cells by activating the UPR [79], and ATF4 stability is mediated by PHD3 [80], speaking to the complex and understudied overlap of 2OGDDs with the UPR.

2.4. Other Emerging Pathways, from Exosomes to Noncoding RNAs