Cardiovascular diseases (CVDs) and kidney disease has stimulated research for strategies that could prevent, rather than just treat, both interconnected disorders. Resveratrol, a polyphenolic compound with pleiotropic biofunctions, has shown health benefits. Emerging epidemiological data supports that early life environmental insults are regarded as increased risks of developing CVDs and kidney disease in adulthood.

Non-communicable diseases (NCDs) are the most common causes of death all over the world, accounting for almost two thirds of all global deaths [1]. Cardiovascular disease (CVD) and chronic kidney disease (CKD) are major NCDs. CVD, a cluster of disorders of the heart and blood vessels, accounts for most NCD deaths. Besides, CKD is a major determinant of the adverse health outcomes of NCDs [2]. An estimated roughly 1 in 10 people worldwide may have CKD [3]. CVD and kidney disease are closely interconnected and damage to one organ leads to dysfunction of the other, eventually resulting in the failure of both organs [4]. It is well established in the literature that CVD is a major cause of morbidity and mortality in patients with CKD [5]. On the other hand, heart failure is a common cause of hospitalization with worsening kidney function [6].

Despite recent advances in pharmacological management, both CVD and kidney disease are still increasingly prevalent disorders. Although CVD and kidney disease are most common in older adults, both disorders take their origins from early life, not only childhood and tracing back into the fetal stage too, and progress slowly across the life span [7][8]. The fetal cardiovascular and renal systems are vulnerable to the adverse effects of in utero exposure to environmental insults [7][8]. Now known as the “developmental origins of health and disease” (DOHaD) [9], this theory describes that developmental plasticity accommodates structural changes and functional adaption during organogenesis. In both cardiovascular and renal systems, developmental programming results in endothelial dysfunction, low nephron endowment, fewer cardiomyocytes, stiffer vascular tree, small coronary arteries, aberrant renin–angiotensin system (RAS) and renal sodium handling, and renal dysfunction [7][8][10][11][12][13].

Conversely, programming processes could be theoretically postponed or reversed before clinical disease becomes evident by shifting therapeutic interventions from adult life to earlier stage, so-called reprogramming [14]. Although many mechanisms in which CVD can induce kidney disease, and vice versa, are not yet fully understood, in recent years our understanding of both disorders can originate from early life via common mechanistic pathways has advanced greatly, helping us develop ideal reprogramming strategies to prevent, rather than merely treat, both disorders from happening [14][15][16][17].

Resveratrol is a polyphenol produced naturally by many plants, particularly grape and peanut [18][19]. Numerous studies have demonstrated its wide range of beneficial effects on human health, including CVD and kidney disease [19][20][21]. Much of prior work exploring the therapeutic actions of resveratrol has mainly studied in established CVD and kidney disease.

Many epidemiological studies in the DOHaD field have concerned CVD [22]. Famine exposure cohorts (i.e., Dutch 1944–1945, Saint Petersburg 1941–1944, and Biafra 1967–1971) indicate that early-life undernutrition is associated with a number of risks factors for CVD, including hypertension, dyslipidemia, obesity, albuminuria, and type 2 diabetes [23][24][25][26]. Another important support for cardiovascular and renal programming came from epidemiological observations showing the associations between early life attributes, in particular low birth weight (LBW) and prematurity, and later CVD and kidney disease [27][28]. In twins, the association between LBW and high blood pressure (BP) is described in childhood [29]. The lighter twins develop arterial narrowing and endothelial dysfunction and are prone to die from ischemic heart disease [29][30].

A reduced nephron number is presumed to be a common risk factor underlying the susceptibility to kidney disease and CVD in adulthood [31]. Nephron is a functional unit of the kidney. Each human kidney contains around one million nephrons, with a 10-fold difference among individuals [32]. During human kidney development, the primitive glomerulus is formed by 9 weeks of gestation and completes at 36 weeks of gestation [33]. Epidemiological studies identify some perinatal risk factors, like LBW, prematurity, gestational diabetes, and maternal obesity as associated with CKD [31][33][34]. Importantly, LBW and prematurity both are related to low nephron endowment [31][33][34].

In addition to reduced nephron, impaired nephrogenesis can cause a wide spectrum of defects in the kidney and urinary tract, namely congenital anomalies of the kidney and urinary tract (CAKUT) [35]. Unlike adults, CAKUT is one of the major causes of CKD in children [36]. As CAKUTs are marked as varying deficits in nephron number, a reduced nephron endowment detected in CAKUT can cause glomerular hyperfiltration, compensatory glomerular hypertrophy, further nephron loss, and accordingly such a vicious cycle leads to CKD progression [37]. A case-control study consisting of 1.6 million infants reported that risk factors for CAKUT consist of prematurity, LBW, maternal thalassemia, male, oligohydramnios or polyhydramnios, gestational diabetes, and first parity [38]. Together, these observations support the notion that LBW and prematurity are major determinants of cardiovascular and renal programming.

A growing body of epidemiological evidence exists regarding environmental influences in early life that can program later CVD and kidney disease, as reviewed elsewhere [7][8][9][10][12][13][14][15][16][22]. These adverse influences include maternal smoking, maternal overnutrition, maternal illness, exposure to medication or environmental toxins, together with undernutrition. There is a positive association of maternal smoking with child obesity, hypertension, and type 2 diabetes, all of which are contributors for CVD [39]. Overnutrition attributed to maternal diabetes or obesity is associated with type 2 diabetes and obesity in offspring, both risk factors for CVD [40][41]. There are also reports showed an association between early-life environmental endocrine-disrupting chemical exposure, like bisphenol, and cardiometabolic traits in childhood [42][43]. Medication uses in pregnancy, like glucocorticoid [44] and non-steroidal anti-inflammatory drugs [45], are also linked to adverse cardiovascular and renal outcomes in offspring. Moreover, several other perinatal risks affecting cardiovascular and renal outcomes in offspring have been reported, such as low gestational hypertension [46], vitamin D intake [47], short-term breastfeeding [48], and excess early postnatal weight gain [49].

However, these epidemiological studies do not allow us to establish direct cause–effect relationships. So, it stands to reason that the uses of animal models to understand which developmental window is decisive for programming, to identify molecular mechanisms behind programmed CVD and kidney disease, and to develop ideal reprogramming strategies.

2. Implications of Resveratrol in CVD and Kidney Disease

Resveratrol (trans-3,5,4′-trihydroxystilbene) is a well-known phenolic compound from the stilbene family consisting a C6–C2–C6 unit [50]. Sources of resveratrol in food consist of the grapes, blueberries, mulberries, raspberries, and peanuts.

Figure 1 illustrates the absorption, metabolism, and molecular target of resveratrol, by which it benefits against CVD and kidney disease. 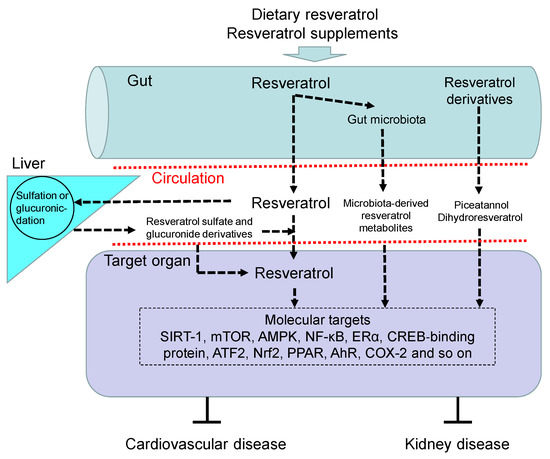 Figure 1. Overview of the absorption, metabolism, and targets of resveratrol. Upon oral intake, resveratrol and its precursors enter the gut and are partially metabolized by gut microbiota to produce microbiota-derived resveratrol derivatives and resveratrol. Like resveratrol, other resveratrol derivatives like piceatannol and dihydroresveratrol can also be absorbed into the blood circulation. Free resveratrol is conjugated in the liver, from where conjugated forms can return to the intestine. Resveratrol glucuronidation and sulfation in the liver to form resveratrol glucuronide and sulfate derivatives. After delivery to the target organ, resveratrol can be deconjugated to stimulate a biological response via regulation of its molecular targets, by which it benefits against cardiovascular disease and kidney disease. AhR = aryl hydrocarbon receptor. SIRT-1 = silent information regulator-1. mTOR = mammalian target of rapamycin. NF-κB = nuclear factor-kappa B. AMPK = adenosine monophosphate-activated protein kinase. ERα = estrogen receptor α. ATF2 = activating transcription factor 2. Nrf2 = nuclear factor (erythroid-derived 2)-like 2. PPAR = peroxisome proliferator-activated receptor. COX-2 = cyclooxygenase-2.

3.2. Beneficial Effects of Resveratrol in CVD

So far, only limited human trials have been conducted to examine cardiovascular benefits of resveratrol [19]. Given that that most trials evaluating combinations of resveratrol with other agents, the extent that it contributes to the combination is still ambiguous. One trial recruiting 1000 participants demonstrated that high levels of the urinary resveratrol metabolite were associated with reduced cardiovascular risk [60].

Several potential mechanisms mediating the protective effects of resveratrol in CVDs have been highlighted [18][21][59][64][70]. Resveratrol mainly activates SIRT-1 to augment endothelial nitric oxide synthase (eNOS) expression and improve endothelial function [63]. Additionally, resveratrol was reported to mediate Nrf2 and antioxidant response element (ARE) and exert its antioxidant function [21]. Resveratrol can also elicit anti-atherosclerotic effects, which are related to its ability to decrease the expression of adhesion molecules via inhibition of NF-κB pathway activation [71], inhibit formation of foam cells by activating Akt and forkhead box O3a (FoxO3a) pathways [72], mediate gut microbiota and its metabolites [73], inhibition of the migration and proliferation of vascular smooth muscle cells [74], and regulate lipid profile [75].

Similar to CVD, the efficacy of resveratrol against kidney diseases is reported only in very few clinical trials [19]. The limited human studies demonstrate a protective effect of resveratrol administration on CKD patients with inconclusive results [76][77][78]. On the other hand, animal studies have shown well-proven utility of resveratrol in a number of kidney diseases, such as diabetic nephropathy [79], ischemia-reperfusion injury [80], sepsis-induced kidney injury [81], drug-induced kidney injury [82], polycystic kidney disease [83], and unilateral ureteral obstruction (UUO)-induced renal fibrosis [84].

Data obtained using animal models indicate the beneficial effects of resveratrol against kidney diseases include decreasing tubulointerstitial damage and oxidative stress, reducing inflammation, increasing antioxidant activity, diminishing mesangial cell proliferation and glomeruli matrix expansion, and improving renal function [20]. As mechanisms underlying renal programming and established kidney disease are not all the same [8][11], there is an increasing need to get a better understanding of resveratrol’s reprogramming effects on the kidneys.

In humans, resveratrol shows no obvious toxicity [88][89]. Though, high dose intake of resveratrol is still related to undesired adverse events as described by some studies. One study revealed that healthy subjects were treated with multiple doses of resveratrol ranging from 25, 50, 100, to 150 mg every four hours for 48 h. Some participants developed mild adverse effects such as dizziness, headache, and epididymitis [90]. Another trial examined the safety of resveratrol at different doses (0.5, 1.0, 2.5, and 5.0 g) in healthy volunteers and found mild side effects such as diarrhea, nausea, and abdominal discomfort were noted only at the higher doses (2.5 and 5.0 g) [91]. Nevertheless, resveratrol appears to have a hormetic dose-dependent effect where resveratrol could have pro-oxidant activities at high doses, rather than antioxidant activities at low doses [92]. Hence, there is still an unmet demand to understand the optimal dosage for pregnant women to maximize the benefit of resveratrol to offspring’s cardiovascular and renal health without increasing toxicity.