Macrophage in Pathogenesis of Osteoporosis

Osteoporosis is a systemic disease with progressive bone loss. The bone loss is associated with an imbalance between bone resorption via osteoclasts and bone formation via osteoblasts. Other cells including T cells, B cells, macrophages, and osteocytes are also involved in the pathogenesis of osteoporosis. Different cytokines from activated macrophages can regulate or stimulate the development of osteoclastogenesis-associated bone loss. The fusion of macrophages can form multinucleated osteoclasts and, thus, cause bone resorption via the expression of IL-4 and IL-13. Different cytokines, endocrines, and chemokines are also expressed that may affect the presentation of macrophages in osteoporosis.

2. Osteoblast, Osteoclast and Osteocyte in Bone Formation and Homeostasis

Osteoblasts originate from the mesenchymal stem cells and are important for the progression of bone formation. Co-expression of bone-specific alkaline phosphatase, type I collagen, and non-collagenous matrix proteins is observed in mature osteoblasts. Transforming growth factor-β (TGF-β) has an important role in bone formation by enhancing osteoblast proliferation [5]. TGF-β can also block osteoblast apoptosis and recruit osteoblastic precursors to the bone surface [6][7][8]. interleukin (IL)-4, IL-10, IL-13, and IL-18 may induce elevation of osteoprotegerin (OPG) and reduction of receptor activator of NF-κB ligand (RANKL) [9]. Final differentiation of osteoblasts can form osteocytes, which become embedded in the mineralized matrix. The processes of bone formation by osteoblasts are enhanced by administration of vitamin D and parathyroid hormone. The Wnt/β-catenin is important for osteoblastic differentiation in skeletal biology and disease [10]. Dickkopf-1 and sclerostin are Wnt inhibitors and can regulate the expression of Wnt/β-catenin in osteoblasts [11]. More than 90% of bone cells are osteocytes, which release chemicals to the bone surface that attract osteoclasts. Osteocytes may secrete sclerostin to limit further bone formation by osteoblasts, and play a major role in matrix mineralization [12]. Bone remodeling involves coupling and regulation of osteoclasts and osteoblasts. Besides these resorptive and formative cells, T-cells, B-cells and macrophages may also influence the immune system and bone loss [13]. The bone remodeling cycle is shown in Figure 1. 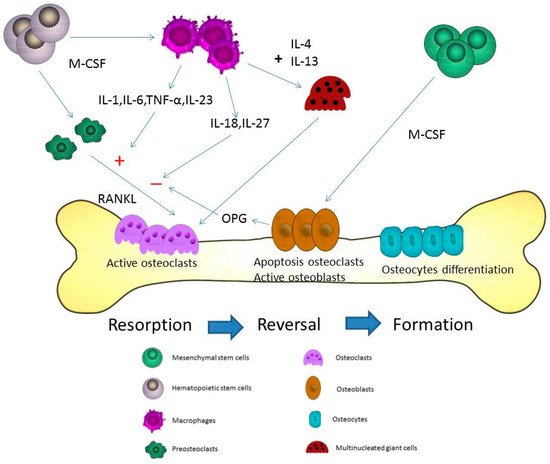 Figure 1. Microdamages in the bone-remodeling units of cancellous or cortical bone induced by osteoclasts. Osteoclasts may be activated by different cytokines including receptor activator of NF-κB ligand (RANKL), interleukin (IL)-1, IL-6, and macrophage-colony stimulating factor (M-CSF) in the resorption state. After the resorption process, the reversal state progresses. In the reversal state, apoptosis of osteoclasts may be induced to stop the bone resorption. The replacement of osteoblasts is observed at the same time. The activated osteoblasts refill the resorption pits and tunnels on the bone surface. In the formation state, osteoblasts directly adhere to the bone surface and progressively form into osteocytes. The proliferation of osteocytes can use these lacuna-canalicular networks to connect within the bone matrix. The cytokines from macrophages including IL-6, tumor necrosis factor-α (TNF-α), IL-23, IL-18, and IL-27 can induce and inhibit osteoclastogenesis through RANKL in bone remodeling. M-CSF is the most important cytokine in the initial stage of macrophage differentiation from hematopoietic stem cells. Different phases are observed during the formation of the multinucleation. RANKL is the major cytokine that stimulates osteoclasts into mature multinucleated osteoclasts. The cytokines, IL-4 and IL-13, may induce macrophages to form multinucleated giant cells during the course of bone resorption.

3. Macrophages in the Pathogenesis of Osteoporosis

In the process of bone remodeling, different states of resorption, reversal, and formation are found. Activated monocytes or bone marrow macrophage precursors adhere to the bone surface to form multinucleated osteoclasts [14]. The bone remodeling cycle is regulated by local and systemic factors. Osteoclasts and osteoblasts are both important for the pathogenesis and progression of osteoporosis. Osteoclasts induce bone resorption and osteoblasts are associated with bone formation. Normal bone quality involves a neutral balance between resorption and formation. A multinucleated osteoclast is differentiated from the mononuclear osteoclast precursor of hemopoietic stem cell. RANKL and macrophage-colony stimulating factor (M-CSF) can induce the proliferation and activation of osteoclasts via the receptor, RANK [15][16]. Therefore, the balance between resorption and formation determines the progression of osteoporosis. M1 macrophages are associated with exacerbation of inflammation and express proinflammatory cytokines. M2 macrophages are associated with anti-inflammatory reactions through the expression of anti-inflammatory cytokines [17]. When macrophages are exposed the stimulation of RNAKL, macrophages may induce osteolcastogenesis and lead to increased M1/M2 ratio in ovariectomized mice. Estrogen can protect M2 macrophage from RANKL stimulation through estrogen receptor αand the downstream blockage of NF-κB p65 nuclear translocation [18]. The blocking of estrogen deficiency-mediated M2 macrophage osteoclastogenesis by reducing the M1/M2 ratio may be a potential therapeutic target in treating postmenopausal osteoporosis. Macrophages play a major role in the activation and formation of osteoclasts and are differentiated from monocytes via M-CSF [19]. The different presentations of macrophages in different organs are shown in Figure 2. Besides the differentiation of osteoclasts from the macrophage lineage, macrophage precursors also differentiate into monocytes, macrophages, and dendritic cells. The activation of macrophages may induce the elevation of interferon-γ (IFN-γ), IL-1, tumor necrosis factor-α (TNF-α), complement proteins, and prostaglandins levels [20]. Macrophages are important for the pathogenesis of osteoporosis [19]. 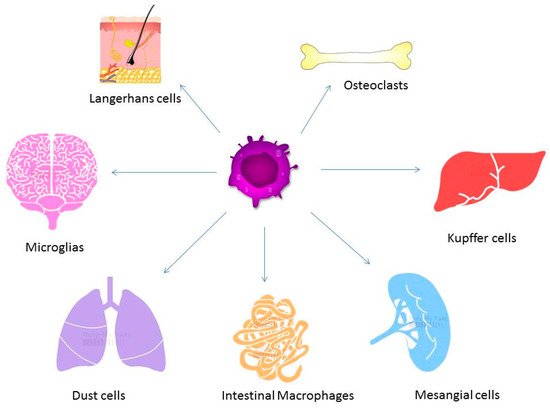 Figure 2. Macrophages exist in different tissues including lung, liver, and brain and have different functions. Different forms of macrophages include Kupffer cells in the liver, alveolar macrophages in the lung, osteoclasts in the bone, and microglia in the brain.

4. The Cytokines from Macrophages Contribute to the Process of Osteoporosis

Macrophages play a major role in the innate and adaptive immune system. Differentiation of macrophages can be found in various tissues including liver, lung, brain, and bone marrow. Macrophages are divided into M1, which express proinflammatory mediators, and M2 that are involved in anti-inflammatory reactions [21]. In the innate immune system, macrophages can execute phagocytosis and opsonization [22]. Different cell receptors of CD14, Fcγ, and CD25 are found in macrophages. Major histocompatibility complex class II molecules and CD23 are also found. These receptors are important for the progression of phagocytosis. IL-4 and IFN-γ can regulate the different functions of macrophages. Macrophages, in turn, may be activated to induce IL-6, TNF-α, IFN-γ, complement protein, and prostaglandins in the immune system. The cytokines expressed by macrophages associated with stimulation or inhibition of osteoclastogenesis include IL-6, IL-18, IL-23, IL-27, and TNF-α [23]. IL-6, a proinflammatory cytokine, can activate osteoclastogenesis [24]. During the inflammation state, proinflammatory cytokines including TNFα, IL-1β, and IL-6, may promote the differentiation and activation of osteoclasts [25]. IL-18 secreted via macrophages may regulate the Th1 differentiation and the IFN-γ production, and is an inhibitor of the TNF-α mediated osteoclastogenesis [26]. Among osteoporotic women, decreased levels of serum IL-18 binding protein and elevated levels of serum IL-18 are observed [27][28]. IFN-γ has a dual role in osteoclasts including the promotion of osteoblast differentiation and inhibition of bone marrow adipocyte formation in different stages [29]. IFN-γ can activate macrophages, but macrophages can secrete IL-18 to regulate the IFN-γ production. IL-23 has been shown to activate osteoclasts [30]. Adding IL-23 to bone marrow stromal cells led to an increased differentiation towards the osteoblast lineage [31]. In the femur of a rat osteoporosis model, IL-23 is reduced after adequate estrogen therapy for improvement of bone mineral density [32]. IL-27 may suppress the expression of RANKL in Th17 cells and CD4+ T cells [33]. IL-27 also inhibited osteoblast apoptosis through increased Egr-2 expression [34]. TNF-α from macrophages may induce indirect osteoclastic activation through RANKL in bone remodeling [35]. Therefore, inflammatory arthritis, such as rheumatoid arthritis, can induce progressive bone loss when the disease is poorly controlled. The different cytokines of macrophages associated with osteoporosis are shown in Figure 1.

6. Different Cytokines for the Pathogenesis of Osteoporosis