The so-called cortical silent period (CSP) refers to the temporary interruption of electromyographic signal from a muscle following a motor-evoked potential (MEP) triggered by transcranial magnetic stimulation (TMS) over the primary motor cortex (M1). The neurophysiological origins of the CSP are debated. Previous evidence suggests that both spinal and cortical mechanisms may account for the duration of the CSP. However, contextual factors such as cortical fatigue, experimental procedures, attentional load, as well as neuropathology can also influence the CSP duration. The present paper summarizes the most relevant evidence on the mechanisms underlying the duration of the CSP, with a particular focus on the central role of the basal ganglia in the “direct” (excitatory), “indirect” (inhibitory), and “hyperdirect” cortico-subcortical pathways to manage cortical motor inhibition. We propose new methods of interpretation of the CSP related, at least partially, to the inhibitory hyperdirect and indirect pathways in the basal ganglia. This view may help to explain the respective shortening and lengthening of the CSP in various neurological disorders.

Performing a movement involves more than just trains of muscular activations. A complex and finely tuned interplay between muscle excitation and inhibition is essential even for very simple movements. One of the most direct marks of motor inhibition, typically measured through transcranial magnetic stimulation (TMS), is the cortical silent period (CSP) [1][2]. The CSP is measured through electromyographic signal recording (EMG) on a target muscle and refers to the period of EMG silence following the elicitation of a motor-evoked potential (MEP) through a single TMS pulse delivered over the contralateral primary motor cortex (M1). Using electrical stimulation, pioneering animal electrophysiology documented the existence of CSP, indicating that excitability of cortical neurons can be reduced after brief and strong stimulation [3][4] and that inhibition lasts for 150–300 ms [5][6]. Similar results have been obtained in human subjects, showing that electrical stimulation of the cerebral cortex through the scalp can elicit CSPs [7], as well as transient functional deficits [8][9]. In parallel with improved comfort for participants [10], the introduction of TMS instead of electrical stimulation to study the characteristics of the CSP allowed the implementation of non-invasive, painless, and more spatiotemporally precise experimental protocols. For instance, one of the most established protocols in the study of cortico-spinal excitability is based on the measurement of single CSPs following a well-controlled MEP elicited by a supra-threshold single-pulse TMS delivered on M1. For both electrical stimulation and TMS, the effects of cortical stimulation on the CSP can be assessed through EMG (see Figure 1B). Nevertheless, despite the largely established reproducibility of the CSP as a direct effect of TMS-induced MEPs and its commonly accepted reliability as a measure of neural inhibition, the neurophysiological origins of the CSP are still under debate. Revealing such origins may boost the understanding of the alterations of the CSP as often observed in several neurological diseases [11][12], possibly linked to physiological or anatomical dysfunctions at the level of the basal ganglia. 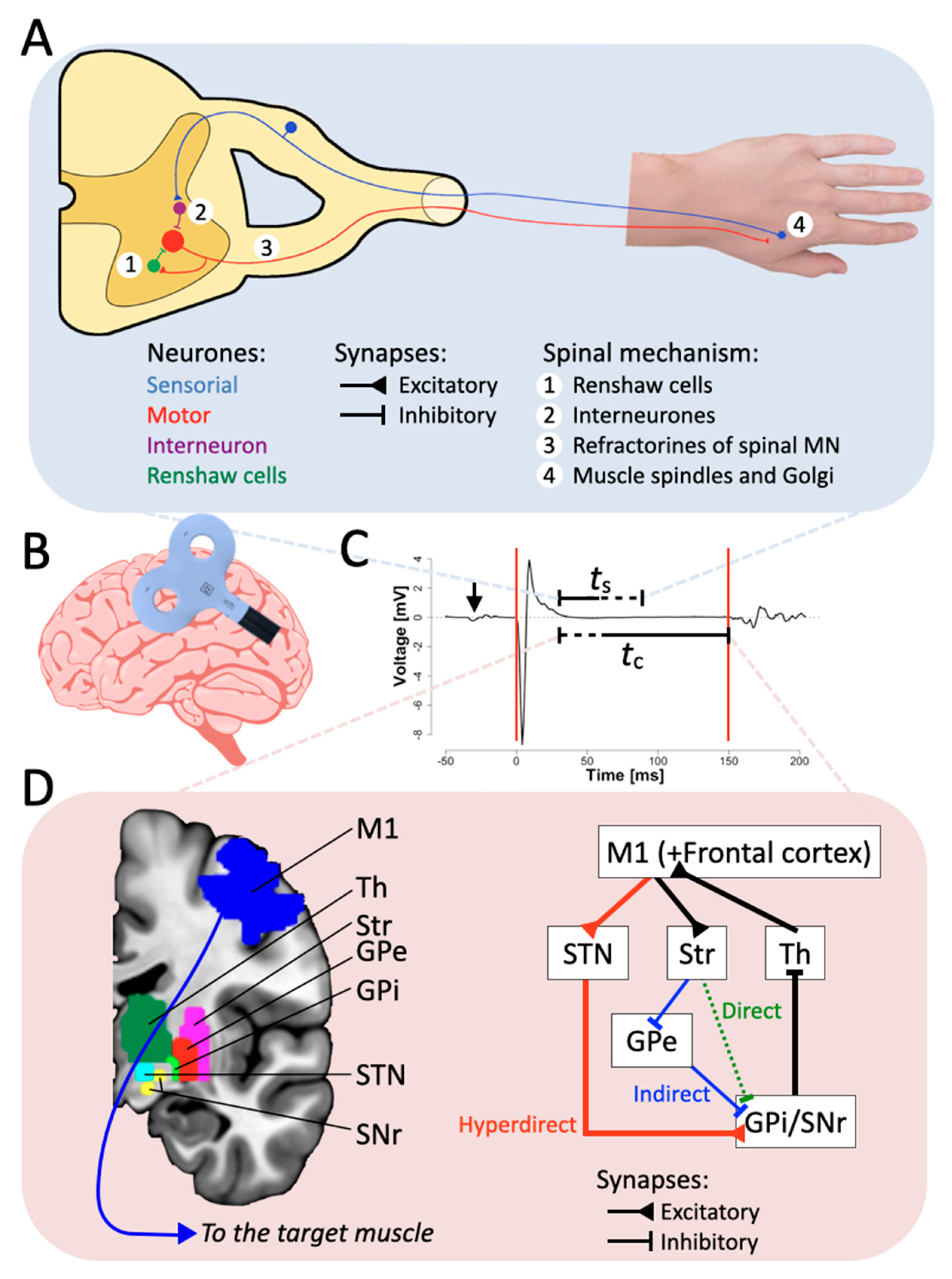 Figure 1. The inhibitory hyperdirect pathway contributes to the CSP duration. (A) Schematic representation of the spinal components of the CSP. Excitation of M1 through single TMS pulse reaches spinal interneuronal circuits, which in turn excite hand muscles. The four spinal mechanisms presented in the scheme contribute only to the first 50 ms of the CSP. (B) Schematic representation of the TMS coil stimulation in M1. (C) Example of an MEP. The red lines represent the usual limit defined for the CSP. “ts” and “tc” stand for the duration elicited by the spinal and the cortical part, respectively, and the arrow represents the TMS pulse artifact. (D) Simplified schematic diagram of the CBGTC loop, at least partially accounting for the later part of the CSP. Abbreviations: Str: striatum; STN: subthalamic nucleus; GPe: external segment of the globus pallidus; GPi: internal segment of the globus pallidus; SNr: substantia nigra pars reticulata; Th: thalamus.

We put emphasis on the anatomo-functional origins of the CSP. In our view, the CSP is determined by both spinal and cortico-subcortical mechanisms. The spinal components account for up to the first 150 ms of the CSP. Then, despite spinal inhibition, cortical mechanisms also influence the CSP, as a mark of M1 inhibition, mediated by GABAergic neurons after an important cortical activation eliciting MEPs. The role of this inhibition is to prevent unwanted movements from occurring. Behavioral and cognitive factors can influence the CSP duration, as well as motor and non-motor neurological disorders. Many of these disorders present anomalies in the basal ganglia, suggesting a central role of this region in determining the characteristics of the CSP. Given that (i) motor output is mediated by the CBGTC loop and (ii) the hyperdirect pathway in the CBGTC loop has important interactions with the indirect pathway for motor inhibition, we propose that the later part of the CSP is mainly influenced by the inhibition induced by the interactions of hyperdirect and indirect pathways crossing at the level of the basal ganglia. A better comprehension of a multifaceted origin of the CSP might lead to better understanding of the physiopathology of motor and non-motor neurological disorders.