Redox Control in ALL

Acute lymphoblastic leukemia (ALL) is a hematological malignancy originating from B- or T-lymphoid progenitor cells. Recent studies have shown that redox dysregulation caused by overproduction of reactive oxygen species (ROS) has an important role in the development and progression of leukemia. The application of pro-oxidant therapy, which targets redox dysregulation, has achieved satisfactory results in alleviating the conditions of and improving the survival rate for patients with ALL. However, drug resistance and side effects are two major challenges that must be addressed in pro-oxidant therapy. Oxidative stress can activate a variety of antioxidant mechanisms to help leukemia cells escape the damage caused by pro-oxidant drugs and develop drug resistance. Hematopoietic stem cells (HSCs) are extremely sensitive to oxidative stress due to their low levels of differentiation, and the use of pro-oxidant drugs inevitably causes damage to HSCs and may even cause severe bone marrow suppression.

Acute lymphoblastic leukemia (ALL) is a type of acute leukemia that mainly manifests as abnormal clonal proliferation of naive or mature T and B lymphocytes and their infiltration of bone marrow (BM), blood, or other organs and tissues, causing BM hematopoietic dysfunction and immune dysfunction. ALL has diverse biological characteristics and substantial clinical heterogeneity. With the continuous discovery of new therapeutic drugs and the ongoing innovation of treatment strategies, the remission rate and survival rate for patients with ALL continue to increase. However, the side effects of drugs and drug resistance in some patients remain problems requiring urgent resolution in clinical ALL treatment.
BM is a major hematopoietic organ. In a hypoxic BM niche, the balance between the production and clearance of reactive oxygen species (ROS) in normal hematopoietic stem cells (HSCs) is critical for the maintenance of normal physiological function. Sufficient evidence indicates that imbalances in redox homeostasis are involved in the development, progression, and relapse of leukemia [1]. Redox dysregulation and increased ROS production are well known and important characteristics of tumor cells, including leukemia cells [2]. In view of redox dysfunction, a weakness of leukemia cells, the implementation of pro-oxidant therapy has created hope for the elimination of leukemia cells. However, increased ROS levels can activate a variety of antioxidant mechanisms in leukemia cells to protect them from oxidative stress injury. In addition, leukemia cells can modify the BM niche into a leukemia growth-permissive and normal hematopoiesis-suppressive leukemia niche, rendering the BM niche a sanctuary for leukemia cells to avoid damage from pro-oxidant agents [3][4][5]. These are important causes of leukemia cells’ resistance to pro-oxidant drugs and ALL relapse.
During the implementation of pro-oxidant therapy for leukemia, the cytotoxic effect of ROS on cells is not selective. Pro-oxidant therapy is akin to a double-edged sword, affecting normal cells while killing tumor cells; for example, it has toxic effects on BM-derived HSCs and can induce side effects such as BM suppression, affecting the therapeutic effects on tumors and even endangering the lives of patients. Therefore, strengthening the cytotoxic effect of ROS on tumor cells while avoiding oxidative damage to normal HSCs has become an important issue in pro-oxidant therapy for leukemia.

ROS are a class of oxygen metabolites that are more active than oxygen and oxygen-containing substances derived from them. The major species of ROS include superoxide, hydrogen peroxide (H2O2), and hydroxyl radicals [6]. ROS production in the body is the result of the aerobic metabolism of cells. Approximately 2% of the oxygen consumed by aerobic cells is estimated to be diverted to ROS generation [7].
Based on the source, ROS production can be divided into exogenous and endogenous production. Exogenous ROS are formed via stimulation by exogenous factors, such as radiation and drugs. Endogenous ROS are produced by mitochondrial and NADPH oxidase (NOX) pathways [8]. Mitochondria are the main site of ROS production in most eukaryotic cells. During aerobic respiration, most electrons are transported along the respiratory chain and combine with molecular oxygen to form water. However, a small portion of electrons leak out of respiratory chain enzyme complexes I and III, resulting in single-electron reduction in molecular oxygen to form strongly oxidative superoxide anions, which generate hydroxyl radicals and H2O2 through specific chemical reactions [9]. NOX, which is localized on the cell membrane, is a major source of ROS [10]. External signals, such as bacterial lipopolysaccharide, tumor necrosis factor-α (TNF-α), and interleukin (IL)-1, can stimulate rapid activation of NOX, resulting in a substantial increase in oxygen consumption by cells and a reduction in oxygen molecules to superoxide anions. Superoxide anions are catalyzed by dismutase to generate H2O2, leading to a rapid increase in ROS levels to eliminate invading pathogenic microorganisms. In addition, the endoplasmic reticulum (ER) and some enzymes, such as lipoxygenase, cyclooxygenase, and xanthine oxidase, can also generate ROS through chemical reactions [11].
Organisms have a complete antioxidant system, which is divided into enzymatic and nonenzymatic antioxidant systems. Enzymatic antioxidant systems include superoxide dismutase (SOD), catalase (CAT), and glutathione peroxidase (GPx). The main function of these antioxidant enzymes is to catalyze the degradation of peroxides. Among them, SOD and CAT are important components of the intracellular antioxidant defense system. SOD includes copper (Cu)/zinc (Zn)-SOD in the cytoplasm and nucleus and manganese (Mn)-SOD in mitochondria. SOD can catalyze superoxide anions to generate H2O2 and O2. The main function of CAT in peroxisomes is to catalyze H2O2 to generate O2 and H2O [11]. GPx is an important intracellular enzyme, and in most cases, its activity depends on the micronutrient cofactor selenium. Thus, GPx, which is often referred to as a selenocysteine peroxidase, can decompose H2O2 into O2 and H2O. GPx has a critical role in inhibiting lipid peroxidation and therefore protects cells from oxidative stress [12]. Nonenzymatic antioxidants include glutathione (GSH), thioredoxin (Trx), vitamin C, vitamin E, carotenoids, flavonoids, melatonin, and other compounds [13]. These nonenzymatic antioxidants either scavenge free radicals by acting as hydrogen donors to provide hydrogen ions or alleviate oxidative stress by chelating metal ions, trapping free radicals, and neutralizing peroxyl radicals [14][15]. Enzymatic and nonenzymatic antioxidant systems act synergistically to provide comprehensive antioxidant protection for cells and tissues.
Under normal circumstances, intracellular ROS production and clearance remain in dynamic equilibrium. An appropriate ROS level is necessary for the maintenance of normal physiological functions. ROS can regulate cell survival, growth, and differentiation and participate in immune and inflammatory responses. Ultraviolet radiation, pathogen invasion, and inflammation may disrupt the redox state of cells and affect the expression of specific genes through related signaling pathways, resulting in different physiological effects. Redox dysregulation, which is caused by various factors, can lead to overproduction and accumulation of ROS, causing oxidative damage to organelles, proteins, lipids, and DNA and thereby destroying the structural and functional integrity of cells and even causing cell death [16][17].

3. The Role of Redox Dyshomeostasis in the Occurrence of ALL 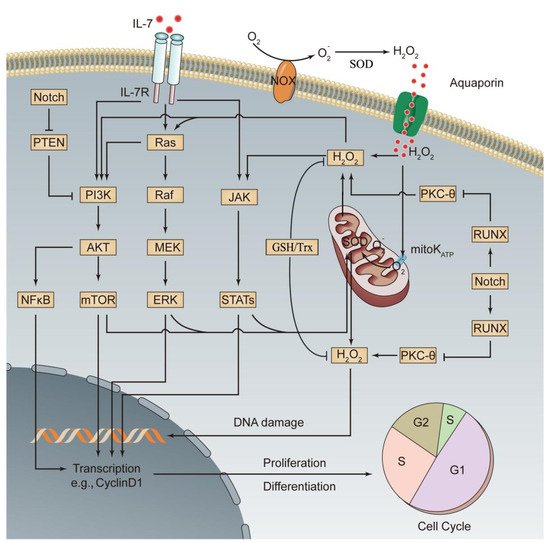