The pre-harvest biocontrol approach currently used includes laboratory inoculations using non-aflatoxigenic strains of Aspergillus flavus. This strategy effectively suppresses the indigenous aflatoxigenic strains and reduces aflatoxin accumulation in sweetcorn.  The reduction in AFB1 with population expressions of AF+ strains by the AF− strains and supports the notion of competitive exclusion through vigorous development and propagation of the non-aflatoxigenic fungi.

Aflatoxins (AFs) are predominantly produced by Aspergillus flavus and A. parasiticus. These fungi are typically saprophytic and occur in soil and plant material, causing food and stored grain decay. AFs are characterized by their carcinogenicity and other harmful health effects. AFs can enhance stress vulnerability and reduce growth competence. AFs also cause clinical symptoms of acute aflatoxicosis, including fatigue, increased anxiety, abdominal pain, diarrhea, and death [1]. AFs naturally exist in various cereal crops, including corn, nuts, wheat, and soybean, directly used by humans and animals. There are two important factors causing crop contamination by AFs at pre-and post-harvest stages, including high temperature and humidity [2].

The toxicity pattern of AF is B1 > G1 > B2 > G2. The letters B and G represent their blue and green fluorescence under ultraviolet radiation, while the numbers 1 and 2 designate their small and large compounds [3]. The International Agency for Research on Cancer classifies AFB1 as one of the most potent, mutagenic, Group 1 human carcinogens [4]. Consequently, various pre-and post-harvest methods were attempted to inhibit or minimize AFs contamination in food commodities. Biological control involves the application of different microbes such as bacteria, yeasts, and AF− against AF+ fungi [5]. Biocontrol is one of the most promising approaches, which involves field inoculation with AF−, and has proven to be effective in reducing AFs contamination in the field [6][7].

According to Wei et al. [8], the removal of AF+ strains could be accomplished by the rapid growth of the competing AF− fungal strain. On the other hand, contamination with AF could be reduced by the physical proximity of competitive strains that could send a signal inhibiting AF production in AF+ strains by AF− strains [9][10]. According to Bandyopadhyay et al. [11], the reduction in AF production is due to direct hyphal contact, known as “touch inhibition”, and not by competitive exclusion. It recommends that AF biosynthesis be somehow affected when the strains of AF+ and AF− come close together.

The diametric growth rates of AF+ and AF− strains on MEA after a 7 d period of incubation at various temperatures (25, 30, 35, and 40 °C) are shown in Figure 1. The growth rates of AF− strains at 25 °C and 30°C were very high compared to AF+ strains, suggesting the efficacy of AF− strains as biocontrol agents for the inhibition of AF+ growth and AF reduction (Figure 2). In the negative control, no growth was observed. 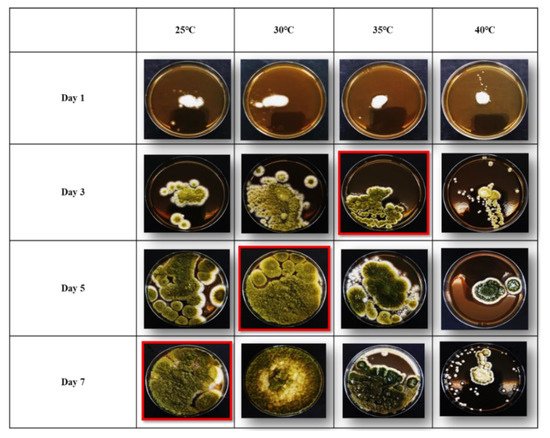 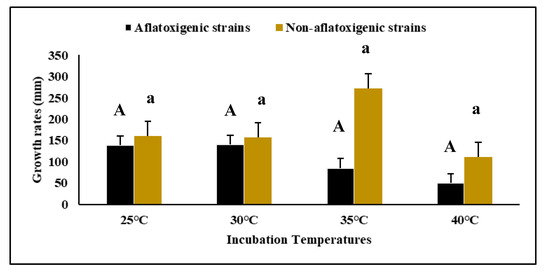 On sweetcorn kernels, the perceived exterior growth of AF+ strains in co-inoculated groups completely covered the pericarp (Figure 3). Even though the entry point was commonly at the pedicel, it is not strange to detect AFB1 in other regions of a corn kernel. There has been a significantly complex fungal spread on the co-inoculated corn kernels as presented in Figure 3. 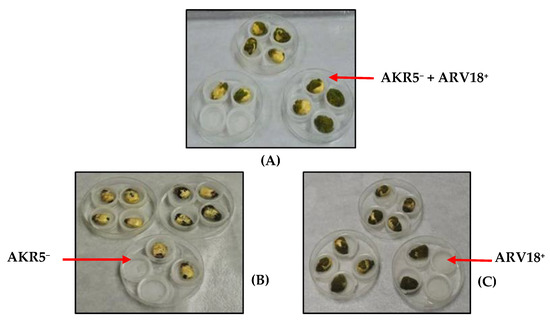 The LOD and LOQ for AFB1 were used to validate the HPLC system performance. A standard solution of 20–100 ppb of mixed AF standard was used to construct a four-point calibration curve. The LOD for AFB1 was 0.072 ppb, according to the fluorescence detector FLD. Likewise, the LOQ for AFB1 was 0.220 ppb (Table 1).

The linearity of the method was determined by four-point calibration curves over a range of 20 ppb to 100 ppb for AFB1, using the correlation coefficient (R2) and the slope to demonstrate a relative association of responses versus AFB1 concentrations. Calibration curves were constructed by plotting the peak area (y) versus AFB1 concentrations (x) (Figure 4). For the FLD detector, calibration curves with linear regression (R2) demonstrated excellent linearity for AFB1 (0.9960). The average recoveries for AFB1 at 20–100 ppb spiking levels ranged from 70–94%. 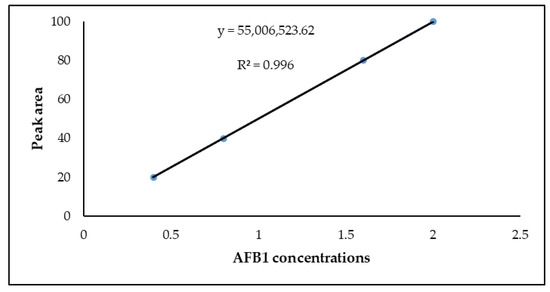 2.5. Quantification and Reduction of Aflatoxin B1

Figure 6. The percentages of reductions in AFB1 by the AF− strains following seven days of incubation.

While all the co-inoculated kernels demonstrated fungal growth at 3 d, external fungal growth was primarily attributed to AF− strains across all incubation periods. The AF− appears to have a competitive advantage compared to AF+ strains due to its ability to grow rapidly and vigorously colonize the host (Figure 2). AF production needs energy in the form of ATPs [12], possibly affecting the capability of a toxigenic strain to colonize rapidly because it may divert energy to a secondary metabolism pathway. Because this does not seem to be a tactical approach aimed at AF− strains, it seems that AF+ and AF− strains do not compete in normal settings and coexist until their habitats are disrupted [13].

The AF+ strains’ growth was significantly reduced in the co-inoculated kernels and was confined to the edges of the kernel, probably due to the rapid growth of the AF− biocontrol strains. A significant difference in population observed between AKR5− + ARV17+ and AKL34− + AKR8+ treatments are in line with previous studies, while the AFB1 synthesis was reduced by AF− strains between 75 and 79%.

The field environments would be better demonstrated by studies that investigate the pre-inoculation of AF+ strains. The observed discrepancies in the population among co-inoculated and the individual treatments back the hypothesis that the growth inhibition of AF+ strains is caused by competitive removal by AF− strains [14][15]. This exclusion may be owing to the preliminary attainment of resources and tissue volume by an AF− strain, or by some mysterious explanation as to why fungus needs to live in a particular condition [16]. Moreover, knowing the relative inoculum level is a crucial element in the transport of biocontrol agents. By employing different quantities of AF− and AF+ strains in the matrix protocol, useful data can be obtained on the impact of the larger inoculum of either strain on the production of AFB1.

There are some other explanations for the reduction in AF production, including the presence of different volatile compounds in both the AF+ and AF− strains. Some terpenes, such as alpha-pinene, have antifungal properties [17] that are found in volatile compounds synthesized by AF− strains [18]. Furans are other types of antimicrobial compounds formed by A. flavus; nonetheless, it is released by the AF− strains several days before the AF+ strains [19]. The synthesis of specific volatiles from AF− strains could be involved in preventing AF+ strains from growing, thus reducing the quantity of AFs produced.

While the harmful impressions of CPA are not as well described as those of AFs [20], misuse of AF− strains, leading to the production of CPA, could lead to unintended human and animal health effects. It is also essential to take account of the possible path of inhibited AF+ strains in instances of inundation and containment by competitive AF− strains when using them as biocontrol agents. For instance, its latent capacity to replicate in laboratory conditions may result in consistently inhibited strains, leading to generations of AF+ descendants becoming more contagious than anticipated. These issues concerning possible impacts on crop quality and unforeseen health threats have to be thoroughly assessed while selecting particular AF− strains for AF biocontrol uses.