Elena B. Domènech
Submitted by:

Oxidative stress (OS) alters cellular homeostasis and elicits a cell response that depends on the severity and the type of insult. Essentially, there is a limiting stress threshold: below the threshold, cells elicit protective mechanisms designed to ensure survival. Conversely, if stress surpasses the threshold or the activation of protective mechanisms fail, cells trigger alternative signaling pathways that eventually lead to apoptosis, necrosis, pyroptosis, ferroptosis or autophagic cell death.
ROS are generated in many enzymatic processes and in redox reactions. Mitochondrial respiratory chain is one of the main ROS sources in cells. In the inner mitochondrial membrane, electrons are transported and oxygen is converted into water.
Free radicals are small molecules/ions that are reactive with small activation energies and short lifetimes. There are many environmental agents that can promote ROS generation (e.g., pollution, cigarette smoke, sunlight). Nonetheless, they can also result from reactions occurring in the body like incomplete catabolism, hepatic detoxification or energy production. An intracellular increase of these oxidant agents causes damage to different cellular components and as a consequence, specific pathways linked to cell senescence are activated. OS can damage lipids, proteins enzymes, carbohydrates, and DNA, thus inducing cell death (Figure 1). In humans, OS is at the basis of several neurodegenerative and cardiovascular diseases, cancer, diabetes, and autoimmune disorders, but the focus of this sudy is the oxidative stress damage in the retina and the diseases associated to an impaired cell response. 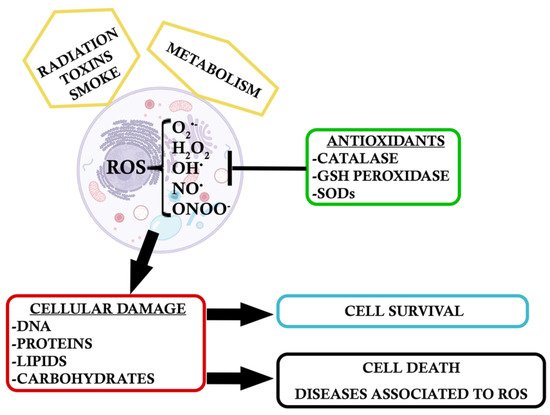 Figure 1. Oxidative stress agents generate Reactive Oxygen Species (ROS), which are counteracted by antioxidant enzymes. An excess of oxidative stress leads to cellular damage, which can trigger pathways for either cell survival or cell death.

In the retina ROS can be generated by:
- Environmental oxidative stress such as air pollution or light-induced oxidative stress are negative factors that promote retinal cell damage and/or death.
- Intrinsic response to oxidative stress which is mainly caused by: I) inflammation and glyosis, II) endoplasmic reticulum stress and, III) high metabolic rate of the retina.
Oxidative stress impacts on autophagy and mitophagy, increases retinal lipid peroxidation, and induces DNA damage and mutations, being considered a pathological environmental trigger of prevalent multifactorial visual disorders, such as glaucoma, age-related macular degeneration (AMD), diabetic retinopathy (DR) and retinal inflammation. On the other hand, pathogenic genetic mutations on genes involved in oxidative stress response and cell protection are causative of rare retinal diseases, such as retinitis pigmentosa (RP) and Leber hereditary optic neuropathy (LHON). Therefore, oxidative stress caused by exogenous noxious stimuli and/or misfunction of endogenous protective pathways contribute to inherited retinal dystrophies and leads to an accelerated progression of retinal neurodegeneration.
As the source and impact of ROS are different depending on the pathology, finding new therapies to avoid damaging ROS formation will be a step forward on preventing or slowing down the progression of these highly incapacitating blinding diseases, whether prevalent or rare. The strategies could be either to enhance the production of antioxidant enzymes, to reduce ROS, or to promote cytoprotective signaling pathways. As a complementary therapy, nutritional changes and diet supplementation with antioxidant properties may have protective effects on ROS produced in the progression of some retinal diseases, depending on the altered signaling pathway.
To sum up, oxidative stress by exogenous or endogenous agents damage the retina and the RPE, triggering apoptosis of photoreceptors and retinal ganglion cells. In prevalent diseases, such as AMD, glaucoma, and diabetic retinopathy, oxidative stress is a trigger of the pathologies, worsening the physiology of retinal cells and accelerating the progression of the disease. In rare genetic disorders, mutations in several causative genes cause metabolic distress and decrease cell resilience to oxidative stress, adding to the progressive attrition of photoreceptors and RGCs, eventually leading to blindness. We hypothesize that other IRD causative genes related to oxidative stress sensing and oxidative stress management, such as genes implicated in the control of autophagy, stress granule formation, or mitochondrial dynamics, will be identified in the near future, widening the landscape of genes and mutations that cause visual disorders. In addition to the more conventional gene therapy tailored to treat specific genetic defects, treatments addressed to increase cytoprotective signaling pathways in front of oxidative stress and to promote retinal cell resilience will provide new avenues to halt the progression of these blinding diseases and restore retinal homeostasis.