Transportin-SR2 (TRN-SR2), also known as transportin-3 or TNPO3, is a karyopherin involved in the nuclear import of specific cargoes, such as serine/arginine-rich molecules. This molecule has been implicated in human diseases such as primary biliary cirrhosis and limb-girdle muscular dystrophy. TRN-SR2 is also known to play a role in HIV-1 nuclear import.

For productive infection, most DNA viruses and a few RNA viruses including Orthomyxoviridae and Retroviridae have to pass the barrier of the nuclear membrane to deliver their genome into the nucleus. Therefore, these viruses have evolved to exploit the complex machinery of nuclear trafficking [1][2]. Lentiviridae such as the human immunodeficiency virus type 1 (HIV-1) are able to infect non-dividing cells like resting lymphocytes, macrophages and dendritic cells [1][3]. Classical studies showed that the nuclear envelope (NE) restricts access to the nucleus as only molecules smaller than 40 kDa or a diameter up to 5 nm can passively diffuse through the NPC [4][5]. Interestingly a recent study showed that the nuclear pore complex (NPC) represents a soft barrier to passive diffusion rather than a rigid barrier. However, the NPC contains FG domains with high net charge and low hydropathy near the cytoplasmic end of the central channel that limit the passive diffusion of macromolecules [6]. HIV-1 and other lentiviruses interact with the nuclear pores and its associated receptors and proteins through an active nuclear import mechanism that remains poorly understood. Among all HIV-1 preintegration complex (PIC) components, the viral cDNA, integrase (IN), reverse transcriptase (RT), capsid (CA), matrix antigen (MA) and viral protein R (Vpr) have all been proposed as the most important factor for HIV nuclear import [7][8][9][10][11][12]. Yet, the exact role of the viral determinants and host factors remains a subject of debate.

2. Implications of TRN-SR2 in nuclear import

TRN-SR2 was discovered as one the major HIV nuclear import determinants by Christ et al. [13]. Later, its ability to interact with HIV integrase was confirmed [14]. Depletion of TRN-SR2 resulted in a decrease of HIV infectivity and a reduced number of nuclear HIV PICs [13]. Another host factor, known as cleavage and polyadenylation specificity factor subunit 6, is imported by TRN-SR2 in the nucleus [15]. CPSF6 has been implicated in several steps in the replication cycle of HIV-1: it has been proposed as a trafficking factor in the cytoplasm [16], as a mediator of nuclear import [17] and as a major determinant of the integration site selection [18]. Its role in HIV replication was first identified in a cDNA expression screen that yielded a truncated version (CPSF6-358) that acts as a transdominant inhibitor of HIV nuclear import [19] and a restriction factor [20]. Later, the ability of CPSF6 to interact with HIV CA was discovered [15]. This interaction is mediated by a pocket formed between the N-terminal domain and the C-terminal domain of adjacent CA subunits [21].

Nevertheless, the role of TRN-SR2 and CPSF6 have been linked because TRN-SR2 is the karyopherin importing CPSF6 to the nucleus [22]. Several structural models explaining the interactions between TRN-SR2, CPSF6 and HIV IN have been proposed. A first model proposed that HIV PIC is translocated to the nucleus by a direct interaction between TRN-SR2 and HIV IN [23] (Figure 1A). This study used a HIV IN mutant R263A/K264A that showed less infectivity and interaction with TRN-SR2. Later, another model proposed that one molecule of TRN-SR2 interacts with the catalytic and C-terminal domains of HIV IN without involvement of the SR binding region [24] (Figure 1B). This implies that TRN-SR2 could bind splicing factors (such as CPSF6) or other natural cargoes avoiding interference of HIV with nuclear import. In the last model, TRN-SR2 would act as a mere mediator of the nuclear import of CPSF6, which would be mediating the interaction with the HIV PIC (Figure 1C) To date, studies produced conflicting results with respect to the importance of CPSF6 and TRN-SR2 for HIV replication.

Figure 1. Nuclear import models for TRN-SR2: (A) TRN-SR2 can interact directly with HIV integrase, (B) Tsirkone et al. proposed a model where TRN-SR2 could accommodate both HIV IN and CPSF6 in a noncompetitive manner, (C) according to the third model, CPSF6 plays the key role in the interaction with the HIV PIC.

3. Implications of TRN-SR2 in uncoating

It is difficult to ignore the process of HIV-1 uncoating when talking about HIV-1 nuclear import. Since, HIV-1 uncoating is key in understanding nuclear import, any nuclear import model will depend on the model of uncoating chosen. To date three different models of HIV-1 uncoating are put forward with data in favor or against (Figure 2). The first model proposes early uncoating shortly after HIV-1 fusion with the cell membrane and the release of the viral core into the cytoplasm (Figure 2A) [25][26][27][28]. However, based on live cell imaging and single particle tracking, the early uncoating hypothesis is not any longer accepted as the prevailing model. The second HIV-1 uncoating mechanism is based on studies from Francis et al., Borrenberghs et al. and Zurnic et al. [29][30][31]. This uncoating model proposes uncoating to take place at the NE while the viral core is docked to the NPC (Figure 2B). The mechanism of action of PF74 that induces premature uncoating and inhibits the RT step was consistent with this model. Alternatively, PF74 may block the interaction of N74D in CA with Nup153 and/or CPSF6 blocking nuclear import. That mechanism would be consistent with the second or third uncoating models. This model is consistent with the reduction of IN content detected in nuclear versus cytoplasmic PICs [29][32] and the LEDGF/p75-mediated increase in FRET ratio of IN upon nuclear entry [29]. The model is also consistent with a reduction in the amount of CA associated with nuclear PICs, although staining may be confounded by interaction partners such as CPSF6. Of note capsid proteins may reassemble inside the nucleus, as is the case with the hepatitis B virus [2]. In 2020 Burdick et al. presented a third model of uncoating whereby intact cones enter the nucleus, complete reverse transcription and integration takes place 1–2 h after uncoating (Figure 2C) [33][34]. The mechanism of action of PF74 that induces premature uncoating at higher concentrations and inhibits the RT step was consistent with the second model.

A favorite scenario for HIV-1 nuclear import according to findings of several research groups is shown in Figure 3, although the exact details still need to be clarified. Cytoplasmic filaments of NUPs mainly consisting of the NUP358 interacting with the CypA binding motif in HIV-1 CA and facilitating docking to the NE. During their residency at the NPC CA interacted with NUP153 in the nuclear basket. Physical stress following completion of reverse transcription shears the narrow end of the cone residing in the nuclear basket. CPSF6 may be recruited to the NPC by its physical interaction with CA. The HIV-1 IN complex interacted with the HEAT repeats in the N-terminal half of TRN-SR2 and since this interaction did not involve the SR-binding region, PICs can be smuggled during TRN-SR2-mediated nuclear import of CPSF6. Nuclear CPSF6 competed with the interaction of Nup153 with the CA residues in the cone stuck in the NPC. Competition between nuclear CPSF6 released the capsid remnants from the nuclear basket (Figure 3). Ran-GTP dissociates IN from TRN-SR2. LEDGF/p75 altered the IN conformation prior to integration. In the absence of CPSF6 (by depletion of for the N74D mutant) this nuclear import pathway was aborted; instead, PICs integrated while still associated with the basket of the NPC. 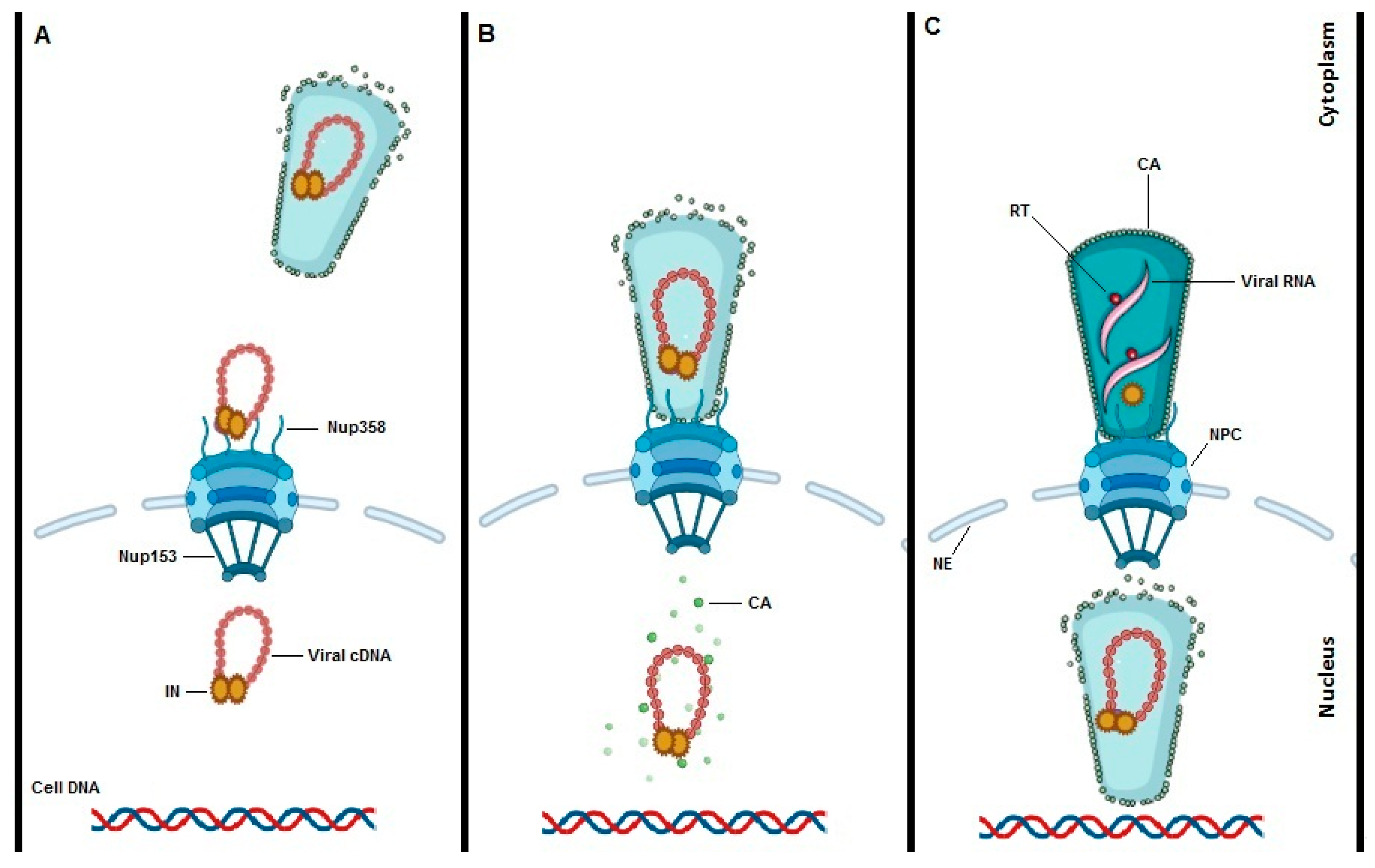 Figure 2. Models of HIV-1 uncoating. To date three potential models for HIV-1 uncoating are proposed. “Immediate uncoating” points to the early disassembly of the HIV-1 core inside the cytoplasm during the first hour of infection and prior to NPC docking (A). Uncoating at the NE is supported by imaging experiments showing that uncoating occurs when the core is stalled at the NPC. (B). Recent studies are claiming a “nuclear uncoating” mechanism and represent the third model of HIV-1 uncoating (C). In the third model, intact HIV-1 cones enter into the cell nucleus, reverse transcription is completed, and uncoating and integration are all completed inside the nucleus and close to the integration site. 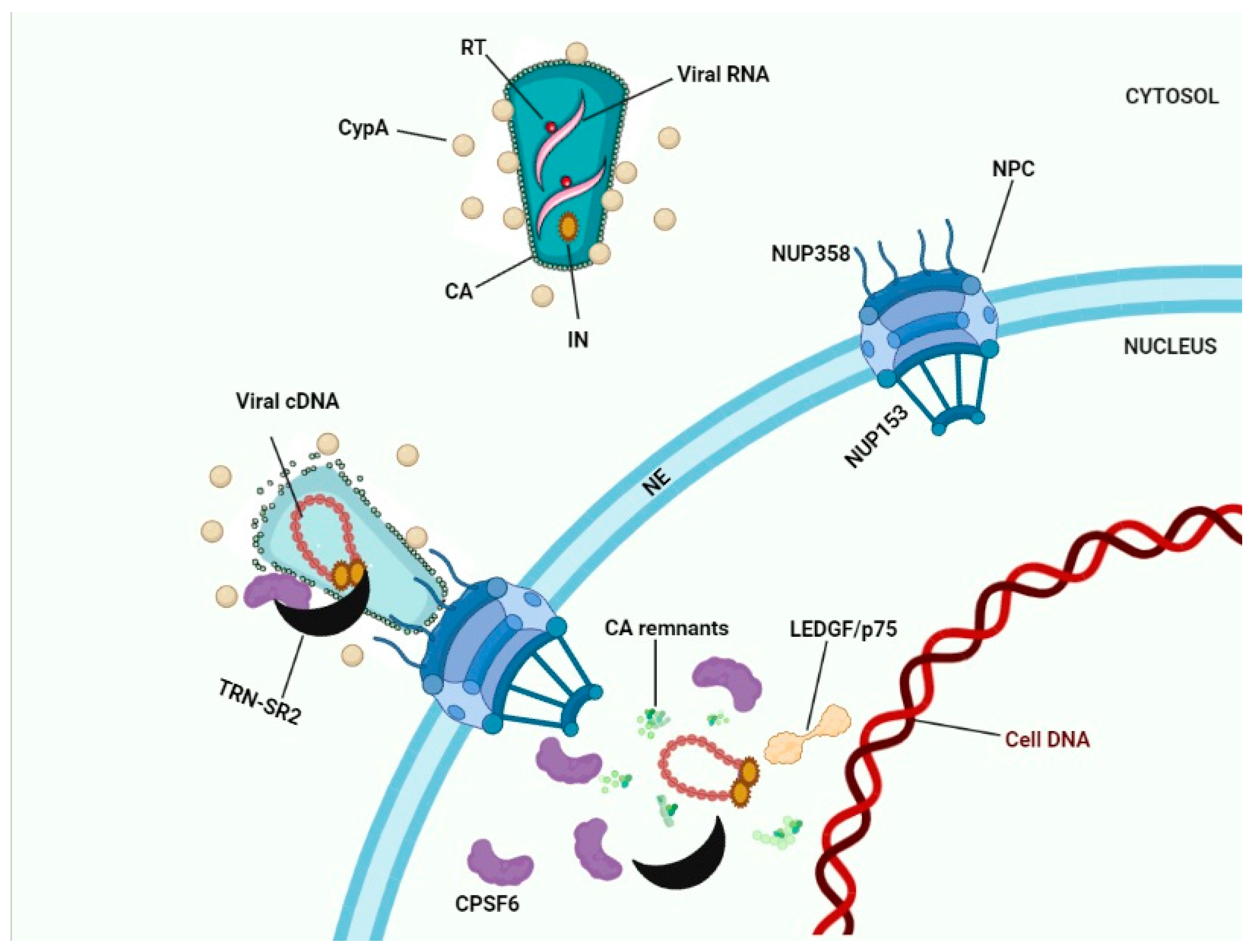 Figure 3. HIV-1 nuclear import. Interaction between Nup358 and viral CA results in docking of HIV-1 cones to the NE. Depending on the model chosen (see Figure 2) capsid uncoating occurs in the cytoplasm, at the NE, or in the nucleus. Interaction between Nup153 and CA results in docking to the nuclear basket of the NPC. CPSF6 bound to CA proteins may recruit TRN-SR2 to the PICs. After capsid uncoating the triple complex of transportin-SR2/HIV-1 IN/CPSF6 may subsequently translocate the viral integration complex into the nucleus. Binding of nuclear CPSF6 molecules to CA remnants may release these remnants into the nucleoplasm.