The antioxidant activity of anthocyanins in food is well known. Numerous antioxidant assays have been proposed to measure the capacity of anthocyanins to prevent the oxidation process that naturally occurs. Different solvents, temperatures, and pH levels are applied in each assay, and these factors should be taken into account in order to obtain useful and reproducible results. The concentration and the structure of these compounds are directly related to their antioxidant capacity and their environment. However, the effectiveness of the anthocyanin ingestion against diseases is also influenced by its bioavailability. Novel methodologies that simulate the digestion process have been developed in order to facilitate the current knowledge of anthocyanins bioavailability. Studies highlight the potential synergy effect between parent compounds and their derivatives (metabolites, conjugated products, and microbe-generated metabolites).

In recent years, the interest in plants and food containing antioxidant properties has increased. The chemical compounds present in vegetables and fruits with these capacities are: vitamins C and E, carotenoids, and flavonoids. The anthocyanins, which are the most important group of flavonoids in plants, are pigments with a flavylium cation (AH+) structure that act as acid. This structure is directly related to its antioxidant activity. Most of the functional properties and the sensory quality of the anthocyanins can be explained by their chemical reactivity. The structures and properties of anthocyanins are dependent on different factors such as pH, temperature, and solvents which should be controlled to carry out antioxidant activity studies of these compounds [1][2][3][4][5][6][7][8][9].
Free radicals, reactive oxygen species (ROS), and/or reactive nitrogen species (RNS) are required for the proper performance of the human body and its organs. These radicals are on-balance by a redox homeostasis in our body. However, the body may be occasionally affected by an oxidative stress resulting from an off-balance state. This stress is important in the development of chronic degenerative diseases including coronary heart disease, cancer, and aging [2]. Anthocyanins have been described as compounds that prevent or inhibit, the oxidation by scavenging free radicals and reducing the oxidative stress. On a regular basis, anthocyanins act as H-atom donator or as single electron transfer. Different methods of analysis based on both mechanisms have been proposed to determine the antioxidant activity of anthocyanins. The antioxidant activity of these compounds depends on their total concentration, structure, and environment. A literature compilation about the concentrations of the most common anthocyanins in different foods is presented in this review in order to have an overview of the different sources of anthocyanins.
The beneficial properties attributed to the dietary ingestion of anthocyanin-rich foods (eye health, cardiovascular diseases, antiobesity, antidiabetic, antimicrobial, anticancer or neuroprotective effect) have been deeply documented in studies carried out with experimental models. These health benefits contrast with the apparent small portion (<1–2%) of these compounds absorbed by our organism [3][4][5]. During the digestion process, anthocyanins undergo to an intense variation in pH that together with the enzymatic and bacterial action can cause the hydrolysis and transformation of anthocyanins into metabolites, conjugated products, or simpler phenolic compounds [7][10][11][12]. The question is: How can anthocyanins be so influential in health? Are anthocyanins the only responsible of their beneficial effects? Last scientific developments highlight the potential synergy effect between parent compounds, metabolites (phases I and II), conjugated products, and microbe-generated metabolites to explain those biological events [4][11][12][13].
Due to their particular physicochemical features, bioavailability of anthocyanins is very difficult to assess. The first studies were performed analyzing blood and urine to determine the anthocyanin concentration levels after the ingestion of foods rich in anthocyanins [14][15][16]. However, the low absorption percentage obtained led to in vitro assays (mostly using cell culture systems) in order to facilitate the knowledge of their biochemical and chemical changes as well as the influence of the digestion steps. Last studies have emphasized the key role of the microbiota in the transformation of anthocyanins, which is not considered in in vitro assays but it is still poorly considered in in vivo and ex vivo studies [14].

The daily intake of anthocyanins can be estimated via food databases and can range from few to hundreds of milligrams per person due to the methodological differences in the assessment, together with the influence of nutritional, cultural, and social differences of the investigated populations [8]. The pattern followed by anthocyanins after oral dispensation is unique and different from other flavonoids [17]. Anthocyanins have a markedly low bioavailability, only 1–2% of the ingested anthocyanins maintain their parent C6–C3–C6 structure in the organism. Food digestion is a pH-dependent process and, therefore, anthocyanins are subjected to transformations in addition to hydrolyzation by several enzymes in the small intestine [12][18]. A portion of the ingested anthocyanins reaches the large intestine, where they are metabolized into low-molecular-weight catabolites, which can be excreted in the feces within 2–4 h (up to 8 h) or absorbed again. Active transporters through either gastric or intestinal cell barrier play an important role in their transfer and absorption within the liver, kidney, brain, or other organs and tissues, besides the stomach [13][19]. In a recent review on tissue bioavailability in animals, Sandoval-Ramírez et al. [20] concluded that the TAC absorbed was 2.17 × 105 pmol/g in mice kidney, 1.73 × 105 pmol/g in liver, 3.6 × 103 pmol/g in heart, and 1.16 × 105 pmol/g in lung; and 6.08 × 103 pmol/g in pig brain. In the wall of the intestine and then in the liver, anthocyanins and their catabolites undergo phase 2 enzymatic metabolism being also transformed into their glucuronidated, sulphated, and methylated forms [10][12][13][14][18][21][22][23]. The presence of microbial catabolites at many sites of the body, at higher concentration than the native form, has suggested that part of the biological activities attributed to anthocyanins is related to the synergetic effect of their colonic catabolites [13][24]. Anthocyanin metabolites and transformation products have been characterized and quantified by several authors [25][26][27][28][29]. Ferrars et al. [28] identified a wide variety of anthocyanin phenolic metabolites, including 11 novel metabolites, in post-menopausal women after 12 weeks elderberry intake, at concentration levels higher than their anthocyanin native forms. There are many critical factors affecting the fate of anthocyanins and their metabolites in our organism: the ability to cross membranes, pH, digestive enzymes, microbiota, biliary acids, or food matrix. The use of radiolabeled (14C) or stable isotope–labelled (13C) tracer studies provides useful information about in which extent anthocyanins are metabolized to phenolic acid derivatives. In this sense, Czank et al. [30] investigated the fate of anthocyanins in eight male participants after the ingestion of 13C-cyanidin-3-O-glucoside (500 mg). The relative mean bioavailability was 12.38% (5.37% excreted in urine and 6.91% in breath). The authors found maximum serum concentration 42-fold higher for 13C-labeled metabolites than their respective native compound 13C-cyanidin-3-glucoside. Up to 49 metabolites were detected including among others: phase II conjugates of cyanidin-3-glucoside and cyanidin (cyanidin-glucuronide, methyl cyanidin-glucuronide, and methyl cyanidin-3-glucoside-glucuronide); degradation products (protocatechuic acid, phloroglucinaldehyde, and phloroglucinaldehyde); phase II conjugates of protocatechuic acid, phenylacetic acids, phenylpropenoic acids, and hippuric acid.
The mechanisms through which anthocyanins may exert their bioactivity are not fully understood as it is not clear whether their activity is linked to native forms, their derivatives, or both. The distinction of their different biological roles is a very challenging task. Some comparative studies have been conducted on the antioxidant activity of anthocyanin metabolites [31]. Recently, Kim et al. [32] provided basic information of the chemical changes of cyanidin glycosides during in vitro gastrointestinal digestion. Cyanidin-3-O-galactoside was degraded into caffeoylquinic acid, which was not found after in vitro digestion of cyanidin-3-O-glucoside. The bioactivity (DPPH) of the anthocyanin metabolites decreased in the intestinal fraction. However, the bioactivity increased after simulated colonic digestion, possibly because of the newly formed colonic metabolites. Furthermore, anthocyanin metabolites from the chokeberry extract exhibited higher DPPH radical activities than those from the mulberry extract. In another study, α-glucosidase inhibitory activity and ROS scavenging activities of conjugated-pelargonidin-3-O-glucoside samples were potentially increased after gastrointestinal digestion [33].
A scheme on the physicochemical reactions observed during the three main stages of the human digestion process can be observed in Figure 1 [11]. Biotransformation reactions start in the oral cavity through salivary amylase (pH 5.6–7.9). Once in the stomach at pH 1.5–3.5, anthocyanins exist in multiple ionic forms being mainly present as red flavylium cations and quinoidal blue species. Finally, in the intestinal step (pH 6.7–7.4) anthocyanins are present as colorless carbinol (with limited absorption) and occur the biotransformation into low molecular weight molecules such as phenolic acids or catechol (gallic acid, vanillic acid, protocatechuic acid, 4-hydroxybenzoic acid, and syringic acid have been identified as the main degradation products of delphinidin-3-O-glucoside, peonidin-3-O-glucoside, cyanidin-3-O-glucoside, pelargonidin-3-O-glucoside and malvidin-3-O-glucoside, respectively) [13]. 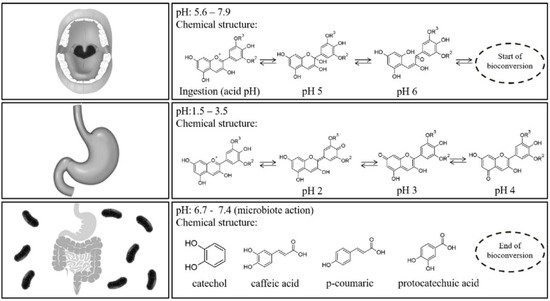 Figure 1. Schematic representation of the anthocyanins chemical structures influenced by the digestion process steps (R2 and R3 = H or Methyl) (taken from Braga et al. [14], with permission of Elsevier).
For a better understanding of the anthocyanin bioavailability, different in vivo and in vitro models simulating digestion have been proposed [11]. Gowd et al. [34] assessed the phenolic profile of blackberry anthocyanin extract followed by human gut microbiota fermentation at different time intervals (0–48 h). Authors revealed the formation of gut metabolites enhance the high glucose plus palmitic acid induced ROS, mitochondrial membrane collapse, and glutathione depletion in HepG2 cells. Several studies have also reported that after anthocyanin colonic fermentation occurs an increase of beneficial bacteria (Bifidobacterium spp., Actinobacteria, Bacteroidetes, Lactobacillus/Enterococcus spp., Akkermansia) [35][36][37][38][39][40]. Intestinal microbiota possesses β-glucosidase activity, allowing the release of glucose from the aglycone and providing energy to support bacterial growth. A study recently carried out by Zhou et al. [35] suggests that the consumption of blueberry and its extracts could exert prebiotic activity and a modulatory effect on the composition and abundance of human intestinal microbiota. Anthocyanins could enhance human health by modulating gut microorganisms, which are often related to different diseases [35][41]. Nevertheless, it is important to note that anthocyanin derivatives can also reduce some harmful bacteria such as C. histolyticum after colonic fermentation [41][42]. A summary of anthocyanins colonic metabolism metabolites and colon microbiota alteration is shown in Figure 2 [11]. 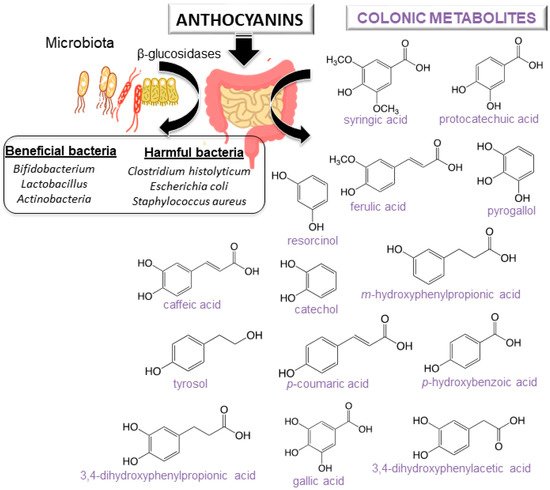 Figure 2. Scheme of anthocyanins metabolites from colonic metabolism and colon microbiota alteration.
In any case, there are still many doubts on mechanisms involved and which factors have crucial impact on bioavailability [7]. Anthocyanins with efficient effect for one individual may not have the same effect for another [12] and there is still a high variability in the results obtained. Based on the literature and recent reviews [11][14] this variability is due to the lack of homogeneity introduced at three levels: (i) food matrix and food processing; (ii) enzymatic levels (affected by genetic factors and diet, age, and sex); and (iii) microbiota functionality. Reported data considering inter- or intra-individual variability is very scarce and bioavailability methods are not standardized making very difficult to reach firm conclusions. On the one hand, in vitro methods (cell-based assays) fail to consider the role of the individual microbiota present in the human body; while, on the other hand, in in vivo trials (human trials and animal studies) each subject has their own microbiota [14].
It is also important to note that the incorporation of anthocyanins into food and medical products is a challenging task due to their high instability and susceptibility to degradation. In this sense, the use of nano/microencapsulation with natural polymers is one of the best strategies to improve the stability of sensitive substances in in vitro simulated gastrointestinal digestion and colonic fermentation [43][44]. According to a recent review on this topic [44] different techniques have been tested to encapsulate anthocyanins including spray-drying > freeze-drying > gelation > lipid-based particles > electrohydrodynamic processes. The first one is the most economical, simplest, and the most applied method (80–90%) [45][46]. The use of other techniques still remains poorly explored probably due to the hydrophilic nature of anthocyanins, being therefore a promising area of future research [44][47][48][49].
Blackberry anthocyanins encapsulated with β-cyclodextrin [41][50] or gum arabic [51] helped to delay the release of anthocyanins during in vitro simulated gastrointestinal digestion. The stability of anthocyanins can be also influenced by the type of wall material. Recently, Wu et al. [43] evaluated the effect of four different wall materials during in vitro simulated digestion and colonic fermentation. The encapsulation technique enhanced significantly the colonic accessibility and delayed the release of anthocyanins, especially for soy protein. Degradation products of anthocyanins such as syringic acid produced during colonic fermentation by the action of gut microbiota were indicative of their benefits for host health.