Solitary fibrous tumors arising from the bone are an extremely rare event and only few cases have been previously described in the literature.

Solitary fibrous tumor (SFT) is a rare mesenchymal tumor of fibroblastic origin that can occur at any anatomic site and typically affects middle-aged adults [1][2][3]. It is characterized by a strong morphologic heterogeneity with a wide spectrum of biologic features. The histological and molecular diagnostic criteria used in soft tissue SFT (S-SFT) have been recently applied on “non otherwise classified” primary bone tumors, drawing out a new category of SFT of the bone (B-SFT) [4][5][6][7]. Nevertheless, B-SFT is exceedingly rare, with only few cases are described in the literature [8][9][10][11], and its biological behavior has not yet been assessed. From a histopathological and molecular point of view, primary B-SFT shares the same features of S-SFT. It is characterized by a prominent, branched vascularization, with a thin and dilated vascular texture defined as “staghorn” and by the presence of the NAB2-STAT6 gene rearrangement (NGFI-A binding protein 2—Signal Transducer and Activator of Transcription 6), present in about 90% of cases and considered a pathognomonic feature [1][12]. Positivity to CD34 stain is distinctive in 90–95% of the cases. S-SFT has an intermediate malignant potential with a low risk of metastasis. Some studies have investigated the prognostic role of previously described molecular markers, without, however, obtaining conclusive results; the aforementioned prognostic criteria have never been explored in B-SFT [13][14][15][16]. Most S-SFTs are clinically indolent, with an intermediate malignant potential and a low risk of metastasis, showing an overall 5- and 10-year distant metastasis (DM)-free rates of 74% and 55%, respectively. In recent times, different stratification risk models have been proposed [17][18][19][20][21][22]. The current most utilized scoring system to discriminate different risk groups for S-SFT—also related to the development of distal metastasis—is the one proposed by Demicco et al. [22], which considers patient age, mitotic activity, tumor necrosis, and size. To date, few prognostic molecular markers have been analyzed. NAB2–STAT6 chimeric transcripts, with a frequency ranging from 55 to 100% [23][24], and characterized by different breakpoints in fusion genes, might contribute to the morphologic diversity of SFT; some studies evidenced associations between specific fusion variants and different clinical features [21][25]. In addition, specific point mutations within the promoter region of telomerase reverse transcriptase (TERT)—C228Tand C250T—have been recently reported in S-SFT subsets and other tumors [15][25][26][27]. These mutations confer enhanced TERT promoter activity and have been suggested as predictive factors to identify high-risk patients. Finally, TP53 has also been proposed as an SFTs risk factor. In particular, tumors with TP53 mutations were almost always classified as high risk [21][28]. Due to the rarity of B-SFT and taking advantage of the availability of a large and homogeneous cohort of patients, the goal of this study was to better characterize the biological behavior of this specific SFT subset located in the bone considering both the clinical, histological, and molecular features, as well as the applicability of the risk stratification model used for S-SFT.

From a histopathological point of view, 15 cases showed more than 4 mitotic figures per 10 HPF and were associated with high cellularity, cytologic atypia, and >10% of necrosis, defining high-grade tumors (Figure 1). CD34 and STAT6 immunopositivity was observed in 95% (23/24) and in 100% (24/24) of cases, respectively (Figure 2). 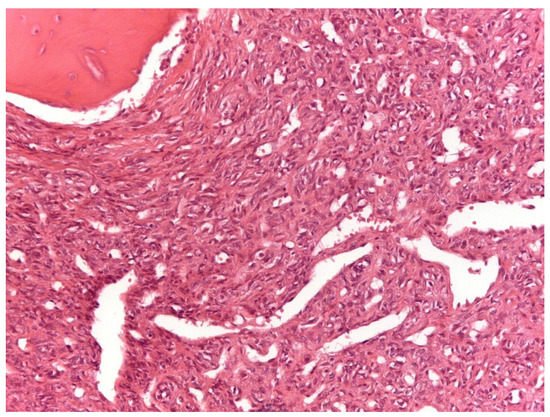 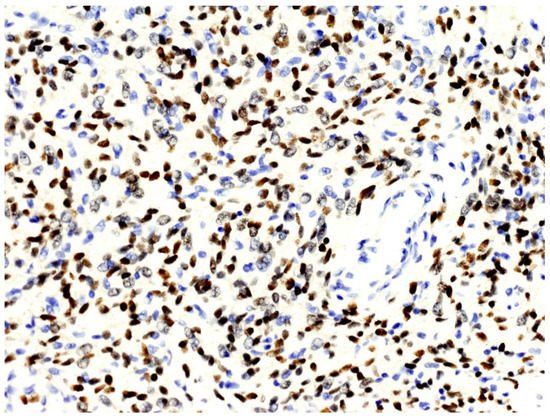 The wild-type C250C genotype was shown in all 16 samples while no C250T mutations were detected. In only one DNA sample, a heterozygous C228T substitution was detected.
The only patient presenting this variant died one day after surgery due to complications; therefore, it was not possible to evaluate its prognostic role. 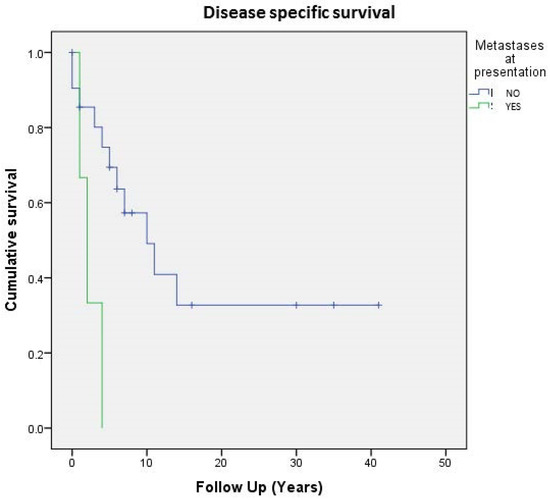 Figure 3. Cumulative survival of 24 patients affected by primary bone solitary fibrous tumor; stratification by metastases at presentation.
Table 1 summarizes the results of the Kaplan–Meier survival analysis of the clinicopathological variables (histological grade, tumor size, age, mitosis, necrosis, Demicco score risk). Stratification by tumor size did not correlate with DSS either for localized patients (p = 0.54) or for the whole series (p = 0.44). However, the only patient with tumor size <5 cm was alive at follow up (Table 1). Stratification based on mitotic count was carried out (A ≤ 1 mitosis, B = 1–3 mitosis, and C ≥ 4); no correlation was found in terms of DSS at the 5- and 10-year follow up either for the whole series (p = 0.54) or for patients with localized disease (p = 0.33) (Table 1).
Table 1. Disease-specific survival (DSS) analysis related to clinicopathological parameters.
* Surgically treated patients; DSS: disease-specific survival.
No significant differences in terms of DSS were found between the different variables analyzed by univariate analysis. Of interest, DSS in patients aged <55 and ≥55 years was found to be almost near statistical significance (p = 0.06), confirming a better prognosis in younger patients. In line with the malignancy histological criteria, none of the NAB2-STAT6 fusion variants detected were significantly correlated to DSS both in all 24 cases (p = 0.72) and in 16 localized cases (p = 0.57). In localized patients, Exon6 was involved in 2 cases out of 5 while other fusion variants (Exon2, Exon4, Other) were detectable in 3 cases out of 6; no significant correlation (p = 0.68) in terms of DSS was observed at the 5- and 10-year follow up (80% vs. 40% and 100% vs. 67%, respectively). P53 variants were assessed in 12 cases: 11 (91.6%) cases showed variation while in one case, no alteration was found. Since few cases were analyzed, no statistical analysis was done; however, tumors with p53 mutations were classified as follows: two ‘low-risk’, three ‘high-risk’, and six ‘intermediate-risk’ cases. Further, 5- and 10-year DSS in the mutated patient was 73% and 54%, respectively, with a mean follow up of 139 months (range 8–495).
The MFS was found to be about 72% at 5 years and 27% at 10 years, as 9 out of 16 patients developed distant metastasis after a mean time of 53 months, whereas the RFS was found to be 100% at 5 years and 75% at 10 years, respectively, as 3 patients out of 16 developed local recurrence after a mean time of 106 months. No significant differences in terms of MFS and of RFS were found between the different variables analyzed by univariate analysis.
Of interest was finding that no local recurrence occurred in patients considered to be low-grade malignancy. In particular, 10-year RFS was 64% for high-grade patients against 100% in low-grade patients. Nevertheless, the p value obtained was not significant (p = 0.19), probably due to the limited number of patients, which could represent a bias.