The discovery of antibiotics was a revolution in medicine, as they have saved countless lives. However, their indiscriminate use has led to the emergence of multi-drug resistant (MDR) bacteria. This problem is now a major global threat and poses a serious challenge in the search for alternative therapies against MDR bacteria [1]. A key factor determining the high rate of MDR spread is the irrational use of antibiotics [2]. The World Health Organization describes the rational application of a drug as when patients receive an appropriate drug for the appropriate indications in the doses personally and individually required for an indicated period of time, implying the lowest cost and with suitable information available, among other measures [3]. The problem of antibiotic resistance causes serious health and economic losses to society worldwide [4]. For example, in the European Union, 25,000 patients die each year due to infections caused by MDR bacteria, with an associated economic cost to society of about 1.5 billion annually [5]. In addition, the COVID-19 pandemic has led to an increase in antibiotic prescription, exacerbating the prospects for antimicrobial resistance [6][7][8].

The agro-food industry plays a crucial role in the emergence of MDR bacteria. In developed countries, livestock farming accounts for about 50–80% of total antibiotic use [9][10]. Moreover, the highest rates of antibiotic resistance are detected in tetracycline, sulfonamide, and penicillin, antibiotics commonly used in the animal feed industry [11][12]. Different factors seem to play a role in the prevalence of MDR microorganisms. Farm size has been associated with higher rates of antimicrobial resistance, which may be related to differences in farm management (hygiene and feeding practices). Antibiotic usage in farms contaminates water with MDR microorganisms that even reach wild species, where the existence of these microorganisms has also been evidenced [12]. Antimicrobials in animal production play an important role in MDR bacteria in humans. Most of the antimicrobials used in food-producing animals are closely related or identical to human antimicrobials. Extensive usage of antibiotics in the food industry can increase the spread of MDR bacteria that can reach humans through food or other routes [13]. Antibiotics in livestock are not exclusively treatments for bacterial infections but have also been widely used as growth-promoting factors since 1951 [9][14]. Indiscriminate use of antibiotics has been linked to higher levels of antibiotic-resistance genes that are also transferred to bacteria infecting humans. Denmark banned Avopracine in 1995, one of the antibiotics used as a growth promoter in livestock, followed by the EU five years later, banning 11 antibiotics for growth promotion. Therefore, nowadays antibiotics usage in the EU varies greatly among EU members, with Italy and Spain leading the way [9].

Despite the fact that companion animals are not linked to the human food chain, they can also act as reservoirs of MDR bacteria [15], and their proximity to humans makes them a potential focus for cross-transmission of zoonotic bacteria, including MDR strains that pose a potential threat to human health [11][16]. Nowadays, the range of species that can be considered as companion animals has increased significantly, including a wide diversity of species (rodents, guinea pigs, reptiles, etc.). This increases the likelihood of human contact with microorganisms and thus the possibility of transfer of dangerous pathogens [16]. Social concern for health care has grown in recent decades, especially in urban areas. Due to their easy availability, the most commonly used antimicrobials in companion animals are human antibiotics, which increases the emergence of MDR strains [6][17], and they become potential reservoirs. Due to the increase in MDR strains that can affect humans, which is caused by misuse of human antimicrobials in animals [11], it has become necessary to investigate new alternatives to animal-only antibiotics.

2. Phages as a Promising Alternative Therapy against MDR Bacteria

Phage diversity is enormous, being the most abundant entity in the biosphere [18]. They can be found in a wide range of environments, including extreme ones [19]. Despite the variation found in phages, they present two main biological cycles, with some modifications: lysogenic cycles (temperate phages), in which phage DNA integrates into the host genome as a prophage; and lytic cycles (lytic or virulent phages), in which phage multiplies inside the host bacteria and releases new phage particles by lysing the host cell [20][21]. Lytic phages are especially interesting for phage therapy due to two main reasons: firstly, because their cycle leads to bacterial death [22] and secondly, because they lack integrases and other related enzymes, thus avoiding horizontal gene transfer [23].

Phages were discovered independently by the English military physician Fredrick W. Twort in 1915, and the Canadian microbiologist Félix H. d’Hérelle in 1917 [22][24]. Phages were successfully tested by d’Hérelle early on to treat dysentery and cholera. However, World War II and the discovery of antibiotics led to the abandonment of phages as a therapeutic tool in Western countries [25]. Nowadays, due to the emergence of MDR bacteria, phage therapy has re-emerged and is considered a potential therapeutic alternative to antibiotics [21][26].

Phage therapy presents some potential advantages for treating bacterial infections. They are able to kill bacteria regardless of whether the bacteria are resistant or not [27]. In fact, MDR Acinetobacter baumannii strains have been shown to be more susceptible to phage therapy than other non-MDR strains [26][28]. Furthermore, phages multiply at the site of infection (Figure 1), increasing in number during the infection process and making it likely that a single (or few) doses will be sufficient to have the desired effect compared to antibiotic treatment. This makes hard-to-reach infections more accessible to phages than to antibiotics if sufficient numbers of phages are applied initially [29]. Phages are also highly specific (Figure 1), implying that they may not affect the commensal bacteria of the host [30]. If a broader spectrum is required to treat an infection, it is possible to use combinations of phages, known as phage cocktails [31]. Phage cocktails are a growing strategy in phage therapy to improve the results of monophage therapy. In addition to extending the utility of phage formulations, phage cocktails may also be useful in preventing the development of phage-resistant strains during individual treatments [32]. Another advantage of phage therapy is that phages can be considered as "adaptive drugs" (Figure 1). Bacteria and phages have co-evolved in nature for millions of years. This may also occur in phage-treated infections, where this coevolution makes the treatment adaptive [26][33]. Furthermore, phage cocktails tend to decrease the emergence of bacterial resistance compared with the application of individual phages [21], as has been shown in other combination therapies [34][35]. 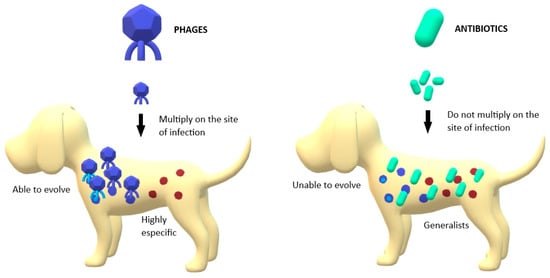 An important remark in phage therapy is that the pharmacokinetics of phages is more complex than that of traditional antibiotics, and there may be differences between phages in terms of their persistence and ability to replicate. They may also interact differently with the immune system, and their efficacy would also depend on the characteristics of the infection, such as its location, abundance, and bacterial composition. Their interaction with many plasma proteins is also largely unknown. Thus, pharmacodynamics and pharmacokinetics considerations become more complex with phages or phage-derived combinations [36] and should be especially important in defining the administration process and dosing.

Regarding phage delivery strategies, oral administration has limitations due to the poor stability of phages in acidic environments such as the stomach. Many authors have described this problem, proposing as a solution the administration of phages with buffering compounds. This would significantly increase phage survival [16]. Other strategies such as nano- and microencapsulation allow controlled or sustained release of phages at the site of infection or increase the time of phage circulation [37]. Another alternative suggested by some authors is rectal application. It has been successfully tested in rabbits using a nonionic surfactant to increase the presence of phages in the blood [38]. In another study, the authors tested a form of phage suppository. This method ensured the presence of phage particles in the foci of infection directly in contact with the preparation [39]. For the treatment of pulmonary infections, phage inhalation has been proposed as an alternative and seems particularly promising, but more research on this method of application is still needed [40]. To treat skin and wound infections, the application of phage therapy directly on the skin has been successfully tested. One example is the treatment of Klebsiella pneumoniae, a pathogen predominantly associated with burn-wound infections. In one study, both a phage therapy and a phage cocktail have been tested in a murine model. Both groups showed a significant reduction in bacterial load compared to the untreated group of mice. The growth that received the phage cocktail showed the maximum reduction (p < 0.01) [41].

Another phage-related strategy already tested in animal models that has been proposed as an alternative to antibiotics is the use of phage-derived enzymes. Phages produce various types of enzymes capable of targeting specific bacteria [42]. Among other functions, some enzymes help them to penetrate the bacterial host and participate in bacterial lysis [21][43].

One of the most interesting types of phage-derived enzymes for therapy is lysins. Lysins are very specific enzymes that cleave peptidoglycan bonds and have a bactericidal effect on susceptible bacteria. Lysins are classified into two main groups: endolysins, which are involved in bacterial lysis, and virion-associated lysins (VALs), which are involved in entry into the host cell, allowing injection of the phage into it [42]. Endolysins are synthesized in the cytoplasm of infected bacteria to cause lysis. They are classified into canonical and exported endolysins. The canonical endolysins are considered the most interesting as enzybiotics and require other phage enzymes, the holins [43]. Lysins are especially useful in biofilm degradation [44]. They have been successfully tested in animal models against bacterial infections [45]. One example is the lysine LysSS, tested in a mouse model of systemic infection by A. baumannii, showing its potential to treat systemic infection [21][46].

Holins are enzymes that also act in the lytic process involved in cell-wall degradation. When the concentration of holins exceeds a threshold, they form pores in the bacterial membrane and allow the action of endolysins. Holins are generalists and combine with other enzymes that broaden the spectrum of the host strain [21][47][48][49].

Depolymerases are phage-derived enzymes capable of degrading the extracellular substances that form the capsule of many bacteria [50]. There are several groups according to the type of bond they break [47]. Depolymerases have a broad host spectrum that contrasts with lysins, and they are also particularly useful in the elimination of biofilms [42][51]. For example, the effect of Dp42 depolymerase in the K. pneumoniae-infected mouse model has also been discussed recently. Dp42 increased the survival rate and significantly reduced the bacterial load in the liver, spleen, and lungs of the treated mouse [52].

The creation and modification of phage proteins is also an interesting approach for the treatment of bacterial infections. Thanks to synthetic biology, bacterial spectrum proteins, bacterial resistance to them, and immunogenicity can be improved [21]. In addition, to reduce the emergence of resistance, an alternative solution would be to develop phage-derived enzyme cocktails.