POME is considered as one of the major problems that has generated voluminously from the palm oil industries. Pre-treatment is utmost required prior discharge to the environment. This review deals with current POME treatment techniques.

Now, palm oil is recognized as high-quality oil used popularly and primarily for cooking in developing countries. Thus, oil palm tree plantations are spreading across Asia, Africa, and Latin America. From the viewpoint of soil and water pollution, palm oil production provides serious problems. Palm oil mill effluent (POME) exists in forms of high solid, oil, and grease and includes biochemical oxygen demand (BOD) and chemical oxygen demand (COD) in richness. These are major concerns in environmental pollutant due to their adverse effects to many forms of life [1]. The direct discharge of POME in the environment is a matter of concern for both toxicological and esthetical reasons. The majority of the palm oil mills use the addition of water during the extraction process of crude palm oil (CPO) from the fresh fruit bunch (FFB). As a result, a considerable amount of wastewater was generated [2] and stored in ponds. In major oil palm-producing nations such as Indonesia and Malaysia, the production of CPO has resulted in an annual production of up to 3 billion pounds of POME. Furthermore, it is estimated that 5–7.5 tonnes of water are required to produce 1 tonne of CPO, with more than 50% of the water ending up as POME [3][4].
POME exists as viscous and brownish liquid containing approximately more than 95–96% of water, together with 0.6–0.7% of oils and 2–4% of suspended solids for the source of fruit debris, and is known as a non-toxic substance [5]. The brownish colour is due to the origins of carotene (8 mg/L), pectin (3400 mg/L), tannin, phenolic (5800 mg/L), and lignin (4700 mg/L), thus making it a nutrient-rich substance [5]. POME is known to be a major problem in every oil palm factory due to its voluminous abundance and disposal problems. The direct discharge of POME on the land results in clogging, water logging of the soil, and kills the vegetation on contact. Discharge of the effluent into waterway causes water depletion, resulting in aquatic pollution [6]. In extreme cases, river water consequently turns brown with an unpleasant smell and viscous characteristic. Mortality of fish and other aquatic organism increases, and local people are deprived of the local water sources for domestic uses and fishing. Therefore, the effective techniques for POME treatment are of the uttermost significance.

The majority of the oil palm mill employed a wet process for the oil extraction, utilizing fresh fruit bunch (FFB). No chemicals are added during the oil extraction process from the oil palm fruits, thereby making all wastes generated as non-toxic to the environment. By using United Oil Palm (UOP) Industries Sdn. Bhd., Malaysia as a reference point, the treatment process starting from the FFB and the extent of the properties changes occurring after decomposition at each individual pond until final discharge was presented in Figure 1. 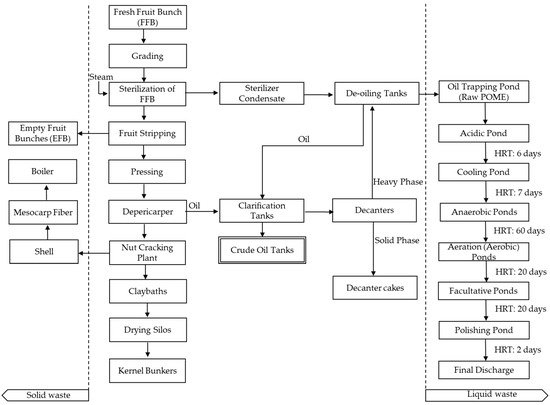 Figure 1. Palm oil production process and oil trapping pond for POME treatment in Malaysia.
For grading, initially, FFB is retrieved from the farm and transported to the mills prior to processing. As categorized accordingly based on their weight and quality, the grading step is crucial to ensure only good quality of FFB selected and can eliminate the deteriorated FFB. The utilization of damaged palm fruits will render low-quality palm oil. The selected good quality FFB were dropped onto a ramp and transferred into horizontal sterilizer cages.
The sterilizer cages with the FFB were exposed to high-temperature pressurized steam under 40 psi for 75–90 min at 140 °C. There are four objectives of the FFB sterilization: (1) most importantly, to deactivate the enzymes responsible for the formation of free fatty acids; (2) to remove external impurities; (3) to soften and loosen the fruitlets from bunches; and (4) to detach the kernels from the shells prior stripping process. The sterilization process acts as the main contributor to the POME accumulation in the form of sterilizer condensate. Also, the sterilized fruit bunches were fed and lifted into a rotating drum. In the drum stripper, the fruitlets were detached and separated from the bunches. At this stage, the loose fruitlets were softened and digested under steam-heated conditions by a steam jacket or by direct live steam injection. Simultaneously, the high pressure and high temperature broke the oil-bearing cells of the mesocarp and were channelled to a mechanical twin screw-press machine for crude palm oil (CPO) extraction [7][8] following clarification.
It was known that the digested CPO consisted of 35–45% palm oil, 45–55% water, and residual fibrous materials and was pumped into a clarification tank in order to separate the oil from CPO at 90 °C in order to further enrich the oil separation process. Then, the oil was skimmed-off from the top of the tank. The bottom phase of the clarification tank still contained remaining residual oil and again passed through the sludge separator, namely decanter heavy phase (DHP) tank and de-oiling tank. The sludge is the by-product of the clarification, and the purification process is the second source of POME in terms of its polluting strength and quantity. The recovered oil was returned to the clarification tank.
In the depericarping, the nuts were removed by the digestion and pressing processes for depericarp and then the residual fibres transported to the nut cracking machine or plant. The cracked mixture of kernels and shells was then separated in a hydrocyclone and claybaths. The third source of POME was fed from the wash-water of the hydrocyclone. The kernel produced was then stored into kernel bunkers before being transferred to the mill for oil extraction. Shell wastes were piled with the mesocarp fibers in the boiler for power generation. The remaining wastewater was discharged accordingly to their subsequent treatment process. Overall, the production of CPO will generate a by-product of solid wastes such as mesocarp fibres and EFB. These solid wastes still can be utilized for other purposes. Raw POME is an example of liquid waste and is subjected to various stages of pond treatments. Detailed elaboration associated with POME treatment will be discussed in the next sub-topic. In contrast, the de-oiling tank feeds POME waste oil to the trapping pound. The ponding system involved several series of ponds of acidic, cooling, anaerobic, aeration (aerobic), facultative and final polishing ponds.

Typically, in the process of oil palm, POME is accumulated from three different sources such as clarification wastewater, sterilizer condensate, and hydro-cyclone wastewater [9]. The general characteristics of each raw POME are presented in Table 1.
Table 1. General characteristics of raw POME.
All values, except pH and temperature, were expressed in mg/L.
The raw POME is a thick brownish colour in the viscous and colloidal suspension, which contains high water contents (95–96%), suspended solids (2–4%), and oils (0.6–0.7%). POME exists as an acidic substance with unpleasant odour, high value of COD, and BOD, which can be concomitantly sensitive to environmental issues [10][11]. Many researchers reported on the POME nutritional composition, as well as the minerals, trace elements, and heavy metals [10][12]. The XRF analysis of POME, sampled in Penang, Malaysia, was obtained below; C 51.0%, O 35.3%, Na 0.0632%, Mg 1.09%, Al 0.215%, Si 0.552% P 0.429%, S 0.553%, Cl 2.75%, K 6.77%, Ca 1.09%, Mn 0.0243%, Fe 0.141%, and Rb 0.0286%. The quality of the effluent produced was affected by many factors including maturation degree of FFB, different treatment systems, as well as varied batches of FFB and factories system [13]. Hence, in order to control and minimize the pollution impact towards the environment, the Department of Environment (DOE), Malaysia, had enacted Environmental Quality Act (EQA) 1974 and set standard limits for the discharge of POME into the environment [14].