Sandstone-hosted uranium deposits commonly contain abundant organic matter, including fossil logs. The precipitation of uranium minerals is often related to reducing environments associated with these organic materials. Below the water table, uranium is likely to be precipitated as uraninite (UO2), but in drier zones a variety of uranium minerals may be found. These minerals may occur as replacements for cellular tissue, or as surface crusts or fracture fillings.

For most of human history, uranium has been an element that had very little usefulness. Uranium-tinted glass is known from 79AD [1]. Pure uranium was first isolated in 1841, and Henri Becquerel discovered radioactivity in 1896. However, until the late 1930s commercial use of uranium was largely limited to uranium oxides that were employed for ceramic glaze and glass tinting. Scientific interest increased after Enrico Fermi’s team observed fission of uranium in 1939. In 1940, the transmutation of uranium to plutonium was discovered. These events marked the beginning of the Atomic Era, when the power of fission was understood to release enormous energy that could be used for nuclear weapons and generation of nuclear power.

The uranium prospecting boom that developed in the late 1940s and peaked in the 1950s was accompanied by an abundance of investigations of geologic conditions that produced uranium ore. By the 1960s, the International Atomic Energy Agency recognized 15 deposit types, including those found in igneous, metamorphic, and sedimentary environments [2]. The latter include sandstone deposits where uranium deposition is commonly associated with the presence of fossil wood and other plant debris. The purpose of this study is to provide an overview of uranium mineralization in fossil wood from localities in western USA, using optical microscopy, scanning electron microscopy, and energy dispersive X-ray fluorescence spectrometry.

Uranium is present in small amounts in many geologic materials. The element is slightly more common than tin, 40 times more abundant than silver, and 500 times more abundant than gold. Under oxidizing conditions, uranium has relatively high solubility, and sedimentary ore deposits typically occur where uranium dissolved in groundwater encounters reducing conditions, causing the element to precipitate as “pitchblende” (uraninite, UO2). Very commonly, the cause of precipitation is the halo of reducing compounds that surround decomposing organic matter. Uranium may also be present as organic complexes as well as inorganic minerals. The source of the dissolved uranium varies, but in the element has commonly been leached from trace amounts present in thick beds of volcanic ash. Relict organic matter may include intact logs (Figure 1), or layers of “trash” (Figure 2). Uranium mineralization may reach high levels in wood and organic debris. During the 1950s uranium boon, in the American Southwest the ore in some small mines consisted of a single fossil log [3][4]. The uranium contents of fossil logs are as high as 35 wt.% [5]. 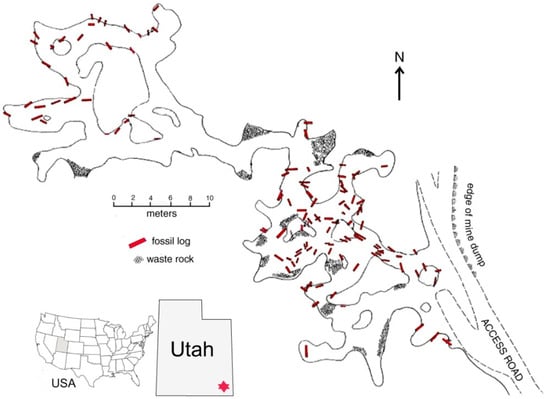 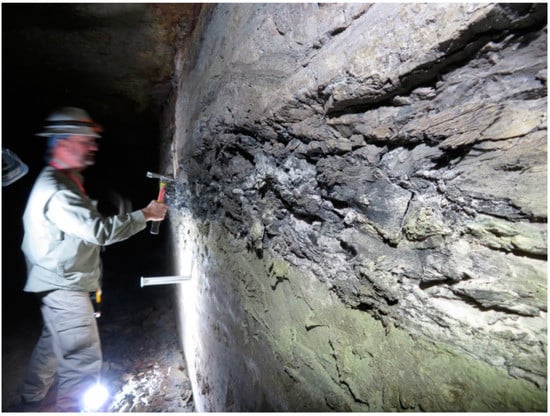 The abundance of wood and organic debris in Mesozoic uranium deposits in the Colorado Plateau can be explained by the nature of the mineralization process, which was initiated when uranium-bearing groundwater permeated the porous sediments of ancient river channels, a paleoenvironment that was likely to contain driftwood logs and woody debris. Uranium precipitation occurred in direct response to reducing agents produced by decomposition of the plant tissue, and compounds released by anaerobic microbes that benefited from nutrients released from the decaying wood. Because hexavalent uranium complexes heavily with organic matter, this process could produce an initial accumulation of uranium, subsequent microbial activity may result in the formation of reduced uranium precipitates [7][8].

Despite the importance of fossil wood for uranium precipitation in sandstone deposits, very little attention has been paid to the uranium mineralogy within the wood. In studies in the 1950s [9][10][11], the microscopic examination of specimens from uranium ores zones in the American Southwest caused investigators to conclude that the primary form of wood mineralization is replacement of the cell walls by uraninite, U2O3, with cell internal spaces (lumina) observed to contain copper sulfides, coffinite, U(SiO4)1−x(OH)4x, or calcite (Figure 3).

More recently, uraninite and coffinite mineralization has been reported from a uranium deposit in NW China [12]. Examination of the samples used for my report reveal that in oxidized ores the uranium mineralization of fossil wood is very different from fossil wood in the primary ore zones. The mineralogic differences are commonly related to the position of ore zones relative to the water table. In anaerobic water-saturated strata, the initial precipitation of uranium from groundwater is typically in the form of black oxides collectively known as “pitchblende”. The primary constituent is uraninite. In ore zones that are above the water table, pitchblende is susceptible to secondary alteration. The extent of possible alteration reflects the fact that Uranium can react with all non-metallic elements except noble gasses; at least 249 uranium minerals have been recognized [13].

Uranium deposits in sandstone commonly contain several ore zones. One example is the Happy Jack Mine in the White Canyon District in southeastern Utah. In this mine, uranium ore occurs in a sulfide-rich zone, an oxidized zone, and a transition area between the two. The mine is not currently accessible; the following description comes from a detailed 1955 study [10]. Fossil wood in the sulfide zone commonly contains uraninite and chalcopyrite, with covellite and sphalerite being present in lesser abundance. In a few specimens, the wood has been replaced by pyrite, chalcopyrite, and sphalerite. Cellular structure is seldom preserved in these specimens.

The transition zone contains abundant goethite and relict concentrations of primary sulfide minerals. As in the sulfide zone, uranium is concentrated in fossil wood, organic “trash”, and adjacent porous sediments. The persistence of uraninite and primary sulfide minerals may have been due to the reducing environments of the organic material, which inhibited the reactive capabilities of oxidizing solutions that affected the surrounding strata. Some wood in this zone has been replaced by goethite. Uranium minerals in the oxidized zone include carnotite, zippeite, uranopilite ((UO2)6(SO4)O2(OH)6·14H2O), and other secondary alteration products. Sulfide minerals are largely absent. Fossil wood in the oxidized zone predominately contains these secondary uranium minerals, formed as alteration products of uraninite.

The mineralogy trends observed in the Happy Jack mine are typical of many uranium-bearing sandstone deposits in the American Southwest, but conditions may vary among the various mining districts, and even in individual mines within a district (Figure 4).