Considering the lack of a comprehensive, multi-faceted overview of the ketogenic diet (KD) in relation to health issues, we compiled the evidence related to the use of the ketogenic diet in relation to its impact on the microbiome, the epigenome, diabetes, weight loss, cardiovascular health, and cancer. The KD diet could potentially increase genetic diversity of the microbiome and increase the ratio of Bacteroidetes to Firmicutes. The epigenome might be positively affected by the KD since it creates a signaling molecule known as β-hydroxybutyrate (BHB). KD has helped patients with diabetes reduce their HbA1c and reduce the need for insulin. There is evidence to suggest that a KD can help with weight loss, visceral adiposity, and appetite control. The evidence also suggests that eating a high-fat diet improves lipid profiles by lowering low-density lipoprotein (LDL), increasing high-density lipoprotein (HDL), and lowering triglycerides (TG). Due to the Warburg effect, the KD is used as an adjuvant treatment to starve cancer cells, making them more vulnerable to chemotherapy and radiation.

Ketogenic diets have started to increase in popularity as doctors and researchers investigate the potential benefits. Nutritional ketosis, the aspirational endpoint of ketogenic diets, is achieved by restricting carbohydrate intake, moderating protein consumption, and increasing the number of calories obtained from fat [1]. Theoretically, this restriction of carbohydrates causes the body to switch from glucose metabolism as a primary means of energy production. This results in the use of ketone bodies from fat metabolism, a metabolic state where the body prefers to utilize fat as its primary fuel source. Recent studies utilizing Low-carbohydrate, High-fat (LCHF) diets, such as the ketogenic diet, show promise in helping patients lose weight, reverse the signs of metabolic syndrome, reduce, or eliminate insulin requirements for type II diabetics [2], reduce inflammation, improve epigenetic profiles, alter the microbiome, improve lipid profiles, supplement cancer treatments, and potentially increase longevity [3] and brain function.
The number of Americans suffering from obesity, diabetes, and metabolic syndrome is on the rise. The markers of metabolic syndrome include an increase in abdominal adiposity, insulin resistance, elevated triglycerides, and hypertension [4][5]. All of these negative health markers increase the risk of cardiovascular disease, diabetes, stroke, and Alzheimer’s disease. According to WebMD, there are currently 27 million people with Type 2 diabetes and 86 million with pre-diabetes. In addition, the Centers of Disease Control and Prevention (CDC) also estimates that almost 40% of adults and around 20% of American children are obese [6][7]. Many researchers believe these diseases are a result of carbohydrate intolerance and insulin resistance. Thus, a diet that reduces the exposure to carbohydrates, including whole grains, might become a more logical recommendation for improving health [8]. In line with this, two dietary regimens, the standard ketogenic diet, and the therapeutic ketogenic diet (Figure 1), which restrict carbohydrate consumption to varying degrees are being studied for their health impacts. The therapeutic ketogenic diet, which severely restricts both carbohydrates and protein, is typically used in the treatment of epilepsy and cancer. However, the Dietary Guidelines for Americans suggests that between 45 and 65% of caloric intake should come from carbohydrates (Figure 1). If a person consumed 2000 calories per day that would equate to an average of 225–325 g of carbohydrates each day [9]. 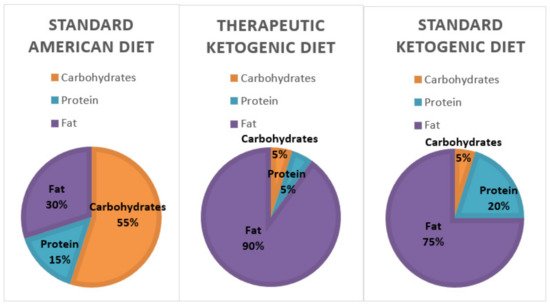 Figure 1. A comparison between the macronutrient breakdown of the standard American diet, therapeutic ketogenic diet, and the typical ketogenic diet. The therapeutic ketogenic diet is typically used in epilepsy and cancer treatments.
One emerging diet that is becoming mainstream is a low-carb/high-fat diet. However, there is a difference between a low-carb and a low-carb ketogenic diet (LCKD). Ketosis is normally achieved through either fasting or carbohydrate restriction. It is important to clarify that a low-carb diet typically refers to a diet with an intake of 50 to 150 g of carbohydrate per day. However, although this is a lower amount of carbohydrates than the standard American diet, it is not low enough to enter nutritional ketosis. Only when a patient restricts carbohydrates to less than 50 g/day will the body be incapable of fueling the body by glucose and will switch to burning fat [10]. The ketogenic diet is a reversal of the current food pyramid supported by the dietary guidelines. Thus, instead of a diet rich in carbohydrates, it is high in fat (Figure 2). The resulting carbohydrate restriction lowers blood glucose levels, and the subsequent insulin changes will instruct the body to change from a state of storing fat to a state of fat oxidation [10]. Once fats are utilized as the primary fuel source in the liver, the production of ketone bodies begins, a process known as ketogenesis. During ketosis, three major ketone bodies are formed and utilized by the body for energy: acetone, acetoacetate, and β-hydroxybutyrate [11]. All cells that contain mitochondria can meet their energy demands with ketone bodies, including the brain and muscle. In addition, research suggests that β-hydroxybutyrate acts as a signal molecule and may play a role in suppressing appetite [12]. 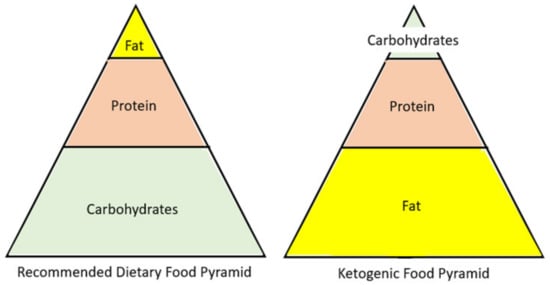 Figure 2. A visual comparison of the recommended dietary food pyramid, including major macromolecule components, to the ketogenic diet food pyramid.
However, there is some heterogeneity in the available data. Thus, the aim of this review is to highlight the role the ketogenic diet has in altering the microbiome, epigenetics, weight loss, diabetes, cardiovascular disease, and cancer as summarized below (Figure 3). 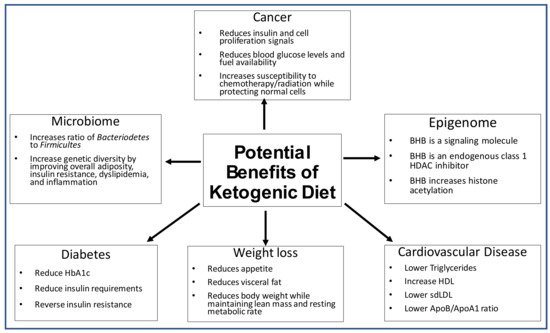 Figure 3. The potential therapeutic impacts of the ketogenic diet on the microbiome, epigenome, diabetes, weight loss and cardiovascular disease.

2. The Effect of the Ketogenic Diet on the Microbiome

3. The Effect of the Ketogenic Diet on the Epigenome

Epigenetics refers specifically to changes “on top” of the genome that can modify and alter levels of gene expression. These epigenetic markers are heritable, yet recent research suggests that some changes can be reversed or occur through environmental changes [20]. The modifications of the genome involve DNA methylation, changes to chromatin structure, histone modification, and noncoding RNAs. Most notable are histone modifications. For example, the N-terminal of histone tails can be acetylated, methylated, phosphorylated, ubiquitinated, or SUMOylated. Histone deacetylases (HDACs) are enzymes that can remove acetyl groups and condense the chromatin. Similarly, sirtuins (SIRTs) are also capable of deacetylating histones. Histone lysine methylation can either activate or repress a gene’s activity based on the exact location and number of methyl groups added to the histone tail [32]. Research has found that most epigenetic modification occur during early embryogenesis, but the genome can acquire changes later in life. Some of the later epigenetic modifications are caused or modified because of diet [32].
Some ketogenic food sources that positively regulate epigenetic activity are cruciferous vegetables, dietary fiber, foods rich in long-chain fatty acids, and berries, such as raspberries [20]. The benefits of some of these food sources have a multitude of positive effects. For instance, black raspberries not only positively affect methylation patterns in the WNT-signaling pathway, but they also profoundly impact the microbiome make-up (increased Lactobacillus, Bacteroidaceae, and anti-inflammatory bacterial species), and increased production of butyrate by fermentation in the gut [20]. Thus, it appears that diets rich in certain foods can positively modify genes that increase overall cell health.
The benefits of the ketogenic diet might also go beyond treating existing disease, and instead help prevent chronic and degenerative disease [23]. A literature review by Miller et al. [23] argued that a state of nutritional ketosis will positively affect mitochondrial function and enhance resistance to oxidative stress and noted that the ketones directly up-regulate bioenergetic proteins that influence antioxidant defenses [23]. According to Boison [33], “Ketone bodies, such as β-hydroxybutyrate (BHB), and their derivatives have received the most attention as mediators of the anti-seizure, neuroprotective, and anti-inflammatory effects of KD therapy” [34][35][36]. The ketogenic diet’s mechanism of action might be due to increased levels of adenosine [37][38], which blocks DNA methylation and, thus, exerts an epigenetic change. A study in epileptic rats subjected to the KD therapy found ameliorated DNA methylation mediated changes in gene expression by increasing adenosine [39], which blocks DNA methylation [40]. It is also being studied for its role in the aging process since it is linked to the positive regulation of epigenetic modifications, such as nuclear lamin architecture [41], reduced telomere length [42][43], DNA methylation, and chromatin structure [44].
The effect of the ketogenic diet on brain health appears to be well supported and is due specifically to the production of BHB [23]. They found that BHB is more than a fuel molecule; it plays important roles in cell signaling. The signaling functions of BHB link the effects of environmental factors on epigenetic regulation and cellular processes since it is an endogenous class 1 HDAC inhibitor [45]. Thus, a ketogenic diet has been linked to increased global histone acetylation, with a specific increase in the expression of protective genes, such as Foxo3a [46].
Evidence also suggests that BHB can have a direct epigenetic effect via a novel histone modification known as β-hydroxybutyrlation of H3K9, which results in improved gene regulation in the hypothalamus and improved overall aging [47]. Furthermore, the energy carrier molecule, nicotinamide adenine dinucleotide (NAD) is important in oxidative respiration. In its oxidative state (NAD+), NAD also acts as a cofactor for sirtuin enzymes and poly-ADP-ribose polymerase (PARP). Sirtuins and PARP play roles in gene expression, DNA damage repair, and fatty acid metabolism [46]. The energy available to a cell is measured by the NAD+/NADH ratio, which is modified by the utilization of glucose versus BHB as a fuel source [48]. During a ketogenic state, more NAD is found in the oxidative state which allows sirtuins and PARP to be more active. Additionally, catabolism of BHB into acetyl-CoA, another energy carrier molecule, raises acetyl-CoA levels. It has been found that the production of two moles of acetyl-CoA using BHB as the precursor reduces only one mole of NAD+ to NADH. However, four moles of NAD+ are produced by glucose metabolism. Thus, the ketogenic diet creates excess NAD+ for the cell and has a positive impact on the redox state of the cell [48]. This might have positive impacts on the activity of NAD+ dependent enzymes, such as sirtuins. Newman et al. [49] found that increased acetyl-CoA favors both enzymatic and nonenzymatic protein acetylation, specifically in the mitochondria, which improves overall mitochondrial function.
BHB produced by a ketogenic diet may also increase the efficiency of ATP production in the mitochondria and reduce the number of free radicals. As a result of the positive impacts of BHB, one study found that BHB precursor molecules improved cognition and disease progression in an Alzheimer’s mouse model [50]. Additionally, the presence of BHB showed improvement in a case study of a patient with Alzheimer’s disease [51]. The presence of D-β-hydroxybutyrate protect neurons from oxidative damage by reducing the cytosolic NAD+/NADPH ratio, resulting in an increase in the antioxidant agent known as reduced glutathione [52]. BHB also inhibits NF-kB, which is known to regulate the expression of multiple pro-inflammatory genes. This results in a diminished pro-inflammatory response [52]. Similarly, the BHB precursor, 1,3 butanediol, also modulates the expression of the inflammasome via histone β-hydroxybutyrlation. Thus, it reduces the expression of caspase-1, IL-1B, and IL-18 [53], which are inflammation markers. A study in C. elegans found that BHB alone could extend their life span [3]. Thus, the endogenous effects of BHB produced by a ketogenic diet might enhance health and increase longevity.

4. The Effect of the Ketogenic Diet on Weight Loss