Magnetic resonance imaging (MRI) is often used to diagnose diseases due to its high spatial, temporal and soft tissue resolution. Environment-responsive or smart MRI nanoprobes can specifically target cells based on differences in the cellular environment and improve the contrast between diseased tissues and normal tissues.

Molecular imaging uses molecular probes for specific biological targets in the tumor microenvironment to obtain better 3D images regarding the anatomical structure, physiology, pathology, etc., which can provide an important reference basis for early and accurate tumor diagnosis and treatment. In the tumor microenvironment, metabolic, immune and endocrine changes affect the occurrence and development of tumors. Researchers have synthesized targeted molecular probes for specific and highly expressed receptors on neovascular endothelial cells and tumor cells to investigate the occurrence and development of tumors and their structural characteristics at the microscopic level [1]. This targeting molecular probe contains three parts: targeting ligand, transporter, and contrast agent, and it should have an amplifying effect, strong penetrating ability, long half-life, and rapid elimination from the body [2].

Nanoparticles (NPs) play an important role in the medical field by virtue of their unique nanoscale characteristics and their core or surface-modified functional groups. By introducing multiple modes into NPs, they can effectively act as imaging contrast agents and can provide complementary information for accurate cancer diagnosis. Most traditional anti-cancer drugs cannot distinguish between normal cells and cancer cells; however, NPs can preferentially accumulate in the tumor area via the enhanced penetration and retention effects (EPR), and can effectively carry and transport imaging probes, therapeutic agents, or biological materials to specific locations, such as specific organs, tissues, and even cells [3]. The composition of the tumor microenvironment is quite different from that of normal tissues. Efficient and selective nanoprobes can help in realizing real-time in situ cell imaging and enable non-invasive cancer treatment in response to tumor microenvironment (hypoxia, slightly acidic, redox, enzyme) or external field stimulation response (light, heat, and magnetism). In recent years, there has been a rapid development of environment-responsive MRI probes. They have stimulus response capabilities and can specifically target cells based on the different characteristics of the cell environment. This significantly increases the cumulative release rate of nanomolecular imaging probes, improves the in vivo imaging efficiency and drug availability, and improves the tracer SNR between the diseased sites and normal tissues [4].

2. The Design of the MRI Nanoprobe

Tumor tissues grow and metabolize rapidly by consuming large amounts of glucose and oxygen, resulting in the accumulation of excessive lactic acid and hydrogen ions in the extracellular fluid. This makes the tumor microenvironment to be weakly acidic (pH 5.5 to 6.8) [5][6]. Thus, the pH-responsive MRI probes can be designed in the following two ways: (1) the probe cleaves and releases ions automatically in response to changes in the environmental pH; (2) the probe changes its shape in response to changes in the environmental pH changes, such as becoming smaller, bigger, or “disintegrate” [7].

Yua et al. designed two pH-sensitive MRI/FI bimodal agents based on AuNPs (Figure 1). The first (Au@Gd and Au@Gd&RGD) contained rhodamine derivatives that were sensitive to acidic conditions, which facilitated the monitoring of the impact of pH changes of lysosomes in living cells. The second (D-Au@Gd and D-Au@Gd&RGD) included two pH-responsive fluorophores, rhodamine and fluorescein derivatives, which could provide a very accurate intracellular pH map and could also be used to calculate the pH of living cells. 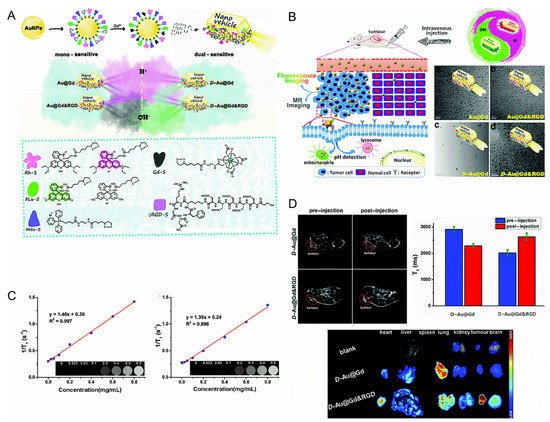 Figure 1. (A): Schematic diagram of the nanovehicles. (B): Schematic diagram of the nanovehicles and TEM images. (C): (Left) in vitro T1-weighted MR imaging of D-Au@Gd in PBS, (Right) in vitro T1-weighted MR imaging of D-Au@Gd&RGD in PBS. (D): (Upper left) the MRI of D-Au@Gd and D-Au@Gd&RGD in U87 tumor-bearing nude mice, (Upper right) the fluorescence imaging, (Lower) the semi-quantitative MRI signal intensity in solid tumors [8]. Reproduced with permission from Royal Society of Chemistry 2020.

Some of the enzymes, such as matrix metalloproteinase, esterase, amylase and cathepsin B, are overexpressed both outside and inside the tumor cells. Caspase-3/7 is a marker of apoptosis. Rao et al. formed Gd NPs that exhibited an r1 increasing effect after interaction with caspase-3/7 by regulating self-assembly and macrocyclization. The nanoprobe they synthesized called C-SNAM is composed of a Gd-DOTA complex that is connected to the DEVD peptide, the disulfide bond sensitive to GSH, and the self-assembly of 2-cyano-6-hydroxyquinoline and D-cysteine residues. In the GSH-induced reducing environment inside the cell, cyclization is caused by the degradation of DEVD peptide in the presence of caspase-3/7. The amplification of r1 in Gd NPs and the tissue retention due to the increase in size enhances the T1 contrast in MRI. They used this nanoprobe to detect caspase-3/7 activity in a chemically sensitive tumor model and successfully completed in vitro and in vivo imaging. Next, they compared it with a nanoprobe that could not be circularized [9]. Coincidentally, after intra-articular injection of matrix-related stem cells, a similar method was used to detect stem cell apoptosis, which could treat cartilage defects [10].

Fu et al. reported a new 19F-MRI contrast agent, a branched-chain fluorinated glycoprotein, which could target cancer imaging in response to a reducing environment (Figure 2). In the presence of disulfide-containing crosslinking monomers, one-pot RAFT polymerization of glucose and fluoro-monomers could easily prepare fluoro-glycoproteins. Since fluorinated sugar polymers interacted with sugar transporters overexpressed on the cell surface, the binding of glucose units along the polymer chain allowed them to effectively target cancer cells. Additionally, the polymer exhibited enhanced 19F-MRI signal under reduced conditions [11]. 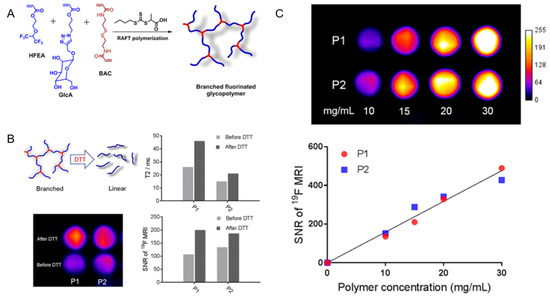 2.4. Other Examples of MRI Nanoprobes

Table 1 summarizes the design of the environment-responsive MRI nanoprobes mentioned in the review, including the name of the probes and the resulting effect.

Table 1. Summary of the design of environment-responsive MRI nanoprobes.

3. The Application of the MRI Nanoprobe

Molecular nanoprobes have good targeting ability, high SNR, and deep tissue in situ imaging. They are important tools for tumor diagnosis and treatment. Since MRI technology has strong penetrating power and high spatial resolution, it is often used to monitor the drug transport process in organisms, combining MRI and molecular nanoprobes to design an environment-responsive nanoprobe that could remove background interference when imaging deep tissues in tumor detection and imaging.

Gao et al. modified Fe3O4 NPs using in situ cross-linking reactive peptide sequences to achieve enhanced tumor imaging (Figure 3). The tumor-specific Arg-Gly-Asp peptide and the self-peptide were connected by disulfide bonds. In the tumor environment, peptides were cleaved using glutathione, facilitating the reaction between the exposed thiol groups and the maleimide groups located in adjacent particles. The labeling responsive particle nanoprobes with 99mTC, combined with the aggregation of Fe3O4 NPs triggered by the tumor microenvironment resulted in the enhancement of the T2 effect, it had anti-phagocytic surface coating, active targeting ability, and dual-mode imaging [42]. 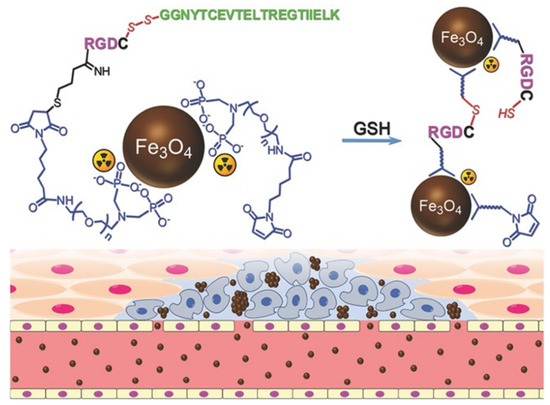 Figure 3. The design of 99mTc-labeled anti-phagocytosis Fe3O4 nanoparticles and the cross-linking reaction between the particles to trigger the formation of particle aggregation in the tumor microenvironment by GSH [42]. Reproduced with permission from Wiley-VCH GmbH, Weinheim 2017. 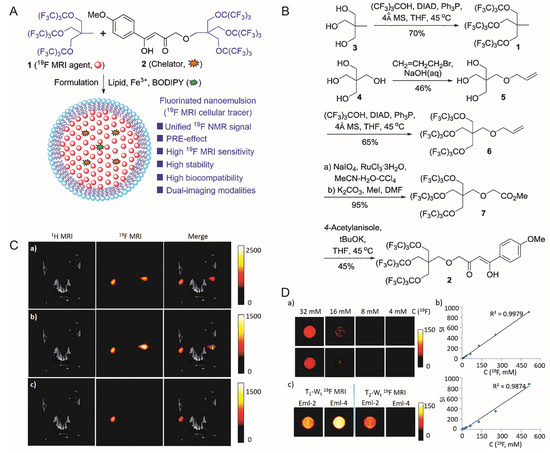 Table 2 summarizes the application of the environment-responsive MRI nanoprobes mentioned in the review.

Table 2. Summary of the application of environment responsive MRI nanoprobes.

MRI is undergoing a fast transformation from traditional non-specific physical imaging to specific molecular and gene-level imaging. Disease evaluation indicators are also changing from traditional morphological changes and anatomical positioning to changes in enzyme function, receptor levels, and gene expression. MR molecular imaging is known to provide a more comprehensive, 3D, specific imaging and biological data for diseases, and shows broad application prospects in life sciences, basic medicine, and clinical research. The diseased tissue microenvironment is significantly different from normal tissues. Thus, using the physical and chemical properties of the diseased tissues to develop environment-responsive MRI nanoprobes can not only improve the imaging effect of the tumors, but also assist in disease treatment. From an imaging point of view, achieving the clinical transformation of environment-responsive nanoprobes requires improving the sensitivity of MRI. Thus, the current strategy aims to obtain a good signal-to-noise ratio with a longer scan time. Future studies might focus on improving material design to improve sensitivity. MR molecular imaging would further facilitate the diagnosis and treatment of diseases; however, we should also strive to improve the deficiencies that still exist in MR molecular imaging, such as nanoprobe safety, imaging sensitivity, etc.