Vincristine-induced peripheral neurotoxicity (VIPN) is a very common side effect of vincristine chemotherapy among pediatric patients with cancer.

Vinka alkaloid (VAs) drugs (vincristine, vinblastine, vinorelbine, vindesine and vinflunine) are a class of microtubule-targeting agents that interfere with the continuous mitotic divisions and cell growth of cancer cells [1]. Vincristine is one of the most used VAs in pediatric patients with cancer and it has been incorporated in several poly-chemotherapy regimens for acute lymphoblastic leukemia (ALL), lymphomas, neuroblastoma, sarcomas and central nervous system tumors. However, neurotoxicity is a severe and dose-limiting side effect of vincristine and it may produce delay or discontinuation of the treatment. Vincristine may cause peripheral, progressive (almost distally to proximally) and symmetric nerve damage, due to microtubule structure disruption, inflammatory processes and axonal dysfunction [2].

2. Pharmacokinetics and Pharmacodynamics of Vincristine

Vincristine acts as an inhibitor of the treadmilling process, by the link to the tubulins, which prevents the formation of the microtubules and consequently of the mitotic spindle. In this way, cell division is blocked and the cell dies [3]. In particular, vincristine and the other VAs interact with tubulin dimers by binding to approximately sixteen–seventeen different specific binding sites, known as the vinca domain [4]. Once the binding site is reached, VAs have a concentration-dependent action: at low concentrations, VAs prevent microtubules from elongating, by binding to the + end and preventing GTP from binding to β-tubulin [5]; at high concentrations, they promote the depolarization of microtubules, as explained in Figure 1. 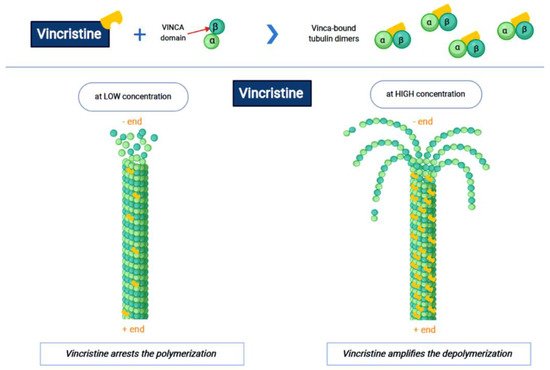 Once the formation of the mitotic spindle is blocked, the cell goes into apoptosis with or without p53 activation [6]. The VAs damage does not only concern the mitosis, but also all the other processes that involve the microtubules, such as the inhibition of axon transport, secretion processes, structure disorders and impairment of platelet functions [7]. Vincristine has poor oral bioavailability and is administered intravenously as vincristine sulfate, which is a vesicant. After intravenous administration, vincristine rapidly distributes extensively into most body tissues, with poor penetration across the blood–brain barrier (BBB) and into the central nervous system (CNS). However, it is very neurotoxic and fatal if administered intrathecally, because it produces quickly serious leptomeningitis and ventriculitis [8]. Vincristine metabolism is performed in the liver by the cytochrome p450 CYP3A enzyme system, particularly by CYP3A4 and CYP3A5. Vincristine has a half-life of 85 h and it is eliminated primarily via the biliary route and excreted in the feces; consequently, great attention should be paid in the presence of hyperbilirubinemia [1]. The kidney eliminates a very small amount of the drug [9]. Vincristine has little myelosuppressive effects and is usually given even to leukopenic and thrombocytopenic patients.

The pathogenesis of VIPN is strictly connected to the mechanisms through which vincristine carries out its antineoplastic function. As previously mentioned, vincristine acts primarily by altering the normal assembly and disassembly function of microtubules, with consequent mitosis block and cell death. In addition to this, all other activities that involve microtubules are inevitably compromised. Inside the neurons, microtubules are not involved in the constitution of the mitotic spindle, since these cells are not in active replication. Microtubules are abundant in neurons, because they make up the skeleton of axons and dendrites, giving them their specialized morphologies [1][10]. In addition to its direct structural and functional damage of nerve cells, vincristine also induces the expression of integrins (immune markers) on the surface of endothelial cells, allowing macrophages to express the CX3CR receptor for the adhesion to the endothelium and the migration into the nervous tissue. This process causes the production of reactive oxygen species (ROS), which act as a chemical mediator for immune-neuronal communication by activating transient receptor potential TRPA1 channels (functionally expressed by the axons of sensory neurons) and evoking pain [11]. Three mechanisms of neurological damage influence and amplify each other, strongly conditioned by patient-related risk factors and treatment-related risk factors, as we explain below. Figure 2 synthesizes the VIPN pathogenesis. 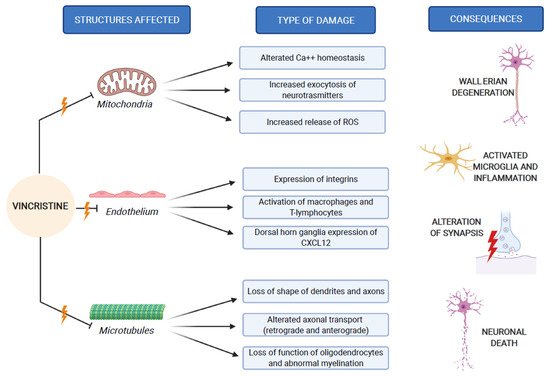 Prolonged treatments and higher single doses of vincristine seem to be related to increased occurrence and severity of VIPN in adult patients, providing validation for a maximum vincristine dose of 2 mg [13][16]. The studies about the association between dose and VIPN in pediatric patients are lacking conclusive results and greater vincristine doses are not exactly associated with peripheral neuropathy in pediatric patients. However, the recommended dose is 0.05–0.065 mg/kg in infants and 1.5 mg/sqm in children, with a maximum of 2 mg/dose and a minimum of a week interval between each dose [12][17]. Table 1 summarizes the treatment-related risk factors for VIPN in children.

6. Strategies for Prevention and Treatment of VIPN

Table 2 summarizes the principal drugs studied in clinical trials for the prophylaxis and treatment of VIPN in pediatric oncologic patients.

Table 2. Principal drugs investigated for prophylaxis and treatment of VIPN in children.

VIPN is a common side effect of vincristine treatment in pediatric oncologic patients and its pathogenesis seems to be multifactorial, related to patient-related risk factors (age, race, ethnicity and genetic polymorphisms) and treatment-related risk factors (dose, time of infusion and drug–drug interactions). The recognition of risk factors would allow clinicians the prompt identification of patients at higher risk, helping clinicians to manage them in the most appropriate and personalized way. Several molecules (such as gabapentin, pyridoxine and pyridostigmine, glutamic acid and glutamine) have been investigated for the prophylaxis and/or treatment of VIPN in pediatric oncologic patients. Furthermore, there is a lack of consensus about guidelines for the management of VIPN in this setting of patients, and future studies are required for evaluating novel preventive and therapeutic approaches.