The use of pesticides in agriculture contributes to non-point source pollution of continental water, threatening drinking water resources and aquatic ecosystems. New pesticide commercial formulations appear each year due to modern industry and substitutions following regulations. Despite the recently implemented directives [1], the recurrent detection and persistence of pesticides and their transformation products in surface aquatic ecosystems and groundwater emphasizes the difficulties of using regulations to protect the environment [2].

In this context, evaluating and predicting the transfer of pesticides from agricultural lands into surface waters is crucial and requires integrative studies accounting for prevailing zones and periods of pesticide dissipation and storage. Ponds are prevailing zones of pesticide dissipation in agricultural catchments, although they are primarily constructed for water storage and irrigation purposes. Ponds can intercept pesticide runoff and act as buffering areas in the agricultural landscape. Leading studies of the literature have addressed the pesticide transfer at different scales of agricultural basins (e.g., [3][4][5][6][7][8][9][10][11][12]) and emphasize the role of ponds in reducing pesticide transfer. Ponds can thus be considered as an “off-farm” and “off-fields” mitigation strategy to limit at the catchment scale pesticide transfer towards downstream surface waters [8][10][12][13].

Ponds are dynamic systems where biological, chemical and physical processes interact to dissipate a variety of pollutants in upstream water, including pesticides [12][14][15]. Pesticide dissipation in ponds results from both degradative and non-degradative processes determining the amount of a pesticide at a given time, in a given pond compartment. Ponds favor pesticide dissipation processes, including hydrolysis, photolysis, sedimentation, sorption, biodegradation, and plant uptake, by increasing at the catchment scale both the water residence time and the pesticide reaction time [16][17]. On the other hand, ponds can act as a secondary source of delayed pollution through the remobilization of previously accumulated dissolved and solid-bound pesticides following a storm event [7], and favor the export of transformation products [18]. Yet the interplay between dissipation processes involved in the storage, transformation and transport of pesticides within ponds is poorly understood.

Available approaches to examine pesticide dissipation in ponds and to establish mass balances allow monitoring and sometime quantifying the capacity of ponds to dissipate dissolved and solid-bound pesticides [25]. Literature surveys highlighted that artificial ponds can reduce pesticide masses by 50% on average (see [13,18,26] for reviews). Inlet and outlet pesticide loads are typically calculated based on concentrations and water discharges to estimate the dissipation efficiency of ponds (Figure 1A). The overall mass transfer of pesticides in ponds can be estimated accounting for variable inputs and dynamic hydro-climatic conditions [13,18,26]. However, the contribution of pesticide dissipation processes to the overall dissipation in relation to temperature, water residence time, hydrological conditions or vegetation dynamics (Figure 1A), remains poorly quantified so far.

In particular, the contribution of degradative and non-degradative processes driving the pesticide dissipation in ponds is generally not addressed (Figure 1A). While pesticide fluxes in ponds could be reduced by 50–80% when the water retention time increases by one order of magnitude [9], the contribution of individual dissipation processes to the overall dissipation remains elusive. The sediment-water interface (SWI) is a specific hot-spot of dissipation, involving both biological and physico-chemical processes, and conferring upon ponds a substantial dissipation potential [27]. However, little is known about the interplay of hydrological and biogeochemical processes affecting pesticide storage and transformation at the SWI. In addition, microorganisms associated with pesticide biodegradation in ponds and the SWI are often unknown and remain unidentified in situ.

Pesticide dissipation within the different ponds compartments involves both non-degradative processes, such as sorption, and degradative processes, including photolysis, hydrolysis and biodegradation (Figure 1A). An evaluation of pesticide degradation is essential to quantify the net mass decrease of parent pesticides but also to infer information on prevailing transformation pathways in relation to the production of potentially toxic and persistent transformation products [2]. Recent advances in stable isotope chemistry [19] and DNA-based biomolecular tools [20], that can be deployed on different time and spatial scales, may help to address these challenges (Figure 1B). 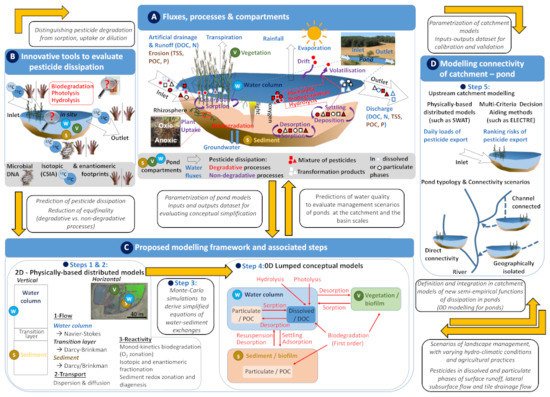 Figure 1. Evaluation and prediction of pesticide dissipation in ponds and the role of ponds at the catchment scale. (A) Fluxes, processes and compartments of ponds. (B) Innovative tools to distinguish pesticide degradative and non-degradative processes. (C) Pond modelling framework sketched in this review and associated steps. (D) Modelling the catchment–pond connectivity to integrate the cumulative effect of ponds in terms of risks of pesticides transfer and fluxes at the catchment scale and elaborate management scenarios. TSS: total suspended solids; DOC: dissolved organic carbon; N: nitrogen; P: phosphorus; POC: particulate organic carbon.

2.2. Understanding the Role of the Sediment-Water Interface in Pesticide Dissipation

Processes sustaining pesticide sorption, settling with suspended particulate matter and degradation are manifold and interact with each other across biogeochemical gradients formed at the sediment-water interface (SWI) of ponds. Vertical gradients of light, temperature and oxygen concentrations affect biogeochemical conditions in both the water and the sediment compartments and control the pesticide behavior over depth (Figure 1A). Pesticide photodegradation prevails generally in the first centimeters of the water column in less vegetated ponds [21]. Hydrophobic pesticides (logKow > 3) sorb onto suspended particles [4], and especially on finer particles [7]. Finer particles partly remain suspended in the water column or settle, depending on the water level and depth, hydrological dynamics and the vegetation [22].

Overall, ponds enhance sedimentation while upstream particulate matter is regularly deposited on the surface layers of bottom sediment, altering sediment physico-chemical properties and biogeochemical processes of the SWI [23]. The fine sediments and associated pesticides can be mobilized during flood events and exported from the pond following a storage phase in the bottom sediment under low flow conditions [23][24].

Regarding the functional processes underpinning pesticide storage and transformation in ponds, a major research direction is to develop concept and approach to distinguish the contribution of degradative and non-degradative processes in ponds. In particular, the direct and indirect role of microorganisms associated with pesticide degradation processes is poorly understood currently. Most importantly, a fundamental effort is required to follow-up and predict the interplay of physico-chemical, hydrological and biological processes at the sediment-water interface of ponds and its role for pesticide dissipation.