Fermented foods and beverages are generally defined as products made by microbial organisms and enzymatic conversions of major and minor food components. Further to the commonly-recognized effects of nutrition on the digestive health and well-being, there is now strong evidence for the impact of fermented foods and beverages, produced or preserved by the action of microorganisms, on general health, namely their significance on the gut microbiota balance and brain functionality.

Having an active and natural variety of microorganisms in the gut may improve general health [1]. The good, healthy bacteria make food more digestible through their enzymes, increased vitamin synthesis, and the preservation of nutrients, and also help to reduce sweet cravings, maintain the immune system, and benefit overall gut wellness [2]. The microbiome, consisting of microorganisms and their collective genomes, modulates the host metabolic phenotype, and influences the host immune system. It is now well established that gut bacteria are closely tied to immune health [3]. The gut microbiota regulates l-tryptophan metabolism and identifies the underlying molecular mechanisms of these interactions [4]. A large majority of the immune system resides in the tonsils and gut, so when gut health is imbalanced, it is hard for the body’s immune system to function properly [5]. There are also a number of common factors in modern life that can throw human gut bacteria off, such as processed foods and antibiotics. The use of antibiotics does have several short and long-term implications in the ecology of the normal microbiota and gut motility [6].

The interactions (Figure 1) between ingested fermented food and intestinal microbiota, and their correlations to metabolomics profiles and health, represent an important perspective, and independent research on health benefits is still emerging [7][8]. Microbiota is specific to each individual, despite the existence of several bacterial species shared by the majority of adults. A diverse and propitious microbial ecosystem (e.g., Bacteroides fragilis, Bifidobacterium spp. and Faecalibacterium spp.) favors homeostasis, particularly at the level of the disease–immune dialogue [9][10]. 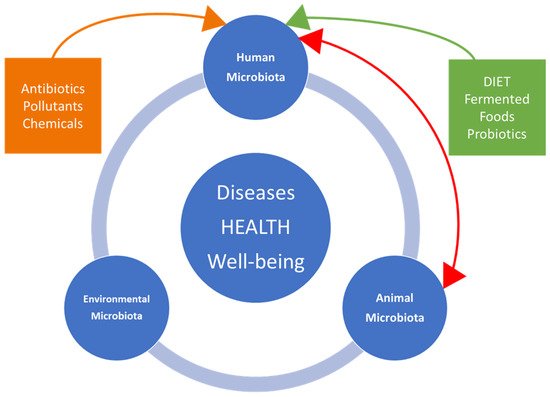 Figure 1. Interactions between dynamics of microbiota in humans, animals, and the associated environment with disease occurrence, salubrity, and well-being.

The use of fermentation in conserving food and beverage as a means to provide better taste, improve nutrition and food safety, organically preserve foodstuffs, and promote health properties, is a well-known ancient practice. The reasons for fermenting foods and beverages include improvements of a product’s storage time, safety, functionality, organoleptic quality, and nutritional quality properties [11]. Not only is this process beneficial for extending shelf-life, but also, fermentation can enhance nutritional properties in a safe and effective manner [12].

Substantial confusion exists between fermented foods and beverages and the probiotic concept. It is important to address the common misconception that fermented foods are the same thing as probiotics [13]. They are not probiotics, although they may contain them, as their live microbial content is undefined. The term “probiotic” was first coined [14] in 1974, and many authors have described the history and the progress of probiotics and their different applications. Ilya Ilyich Metchnikoff, the Nobel Prize winner in Medicine in 1908, was the first who observed the effect of what is called now “probiotic” [15]. FAO/WHO redefined the term “probiotics”, which is now widely accepted as constituting “live microorganisms that, when administered in adequate amounts, confer a health benefit on the host” [16]. Different types of bacteria (e.g., Lactobacillus, Bifidobacterium, Streptococcus, Bacillus) and yeast or mold (e.g., Saccharomyces, Aspergillus, Candida) are used as probiotics. Probably, the first real use of food containing probiotics was fermented milk, but today we have to differentiate between probiotics and probiotic-containing foods (e.g., fermented foods) [17]. The scope and appropriate use of the term “probiotic” has been well clarified (Figure 2) [18].

Probiotics are able to renew, restore, and grow affected tissues lining the digestive tract with beneficial microorganisms neutralizing the harmful ones. Useful live microorganisms will regenerate our microflora fermenting our food correctly and improving our health [19][20].

Despite the impact of fermented foods and beverages on gastro-intestinal well-being and diseases, their health benefits or recommended consumption have not been widely translated to global inclusion in world food guidelines [21]. When fermented foods and beverages are supplemented with probiotic bacteria, they provide numerous extra nutritional and health characteristics [22].

Fermented foods and beverages are useful because they help provide a spectrum of probiotics to foster a vigorous microbiome. Fermented foods with unidentified microbial content cannot be considered probiotic suppliers. The two main effects of the daily consumption of fermented foods are upon the immune system and upon metabolic function [24].

Dealing with fermented foods has parallels with One Health, since it involves the links between human, animal, environment, foods and microbiota that impacts the organoleptic and physicochemical characteristics of foods as well as human health [25].

3. One Health Approach and International Organizations

Antimicrobial resistance is the ability of a microorganism (like bacteria, viruses, and some parasites) to stop an antimicrobial (such as antibiotics, antivirals, and antimalarials) from working against it. As a result, standard treatments become ineffective, infections persist, and may spread to others.

Antibiotic resistance is one of the biggest threats to global health, food security, and development today, and can affect anyone, of any age, in any part of the world. Bacteria, not humans or animals, become antibiotic-resistant; the cause for this is mainly the way antibiotics are prescribed and used without sales supervision and medical or veterinarian control. Tackling antibiotic resistance is a high priority for the United Nations’ agencies FAO, and OIE, and the WHO, who are leading multiple initiatives and global action plans.

The United Nations (UN) has become the foremost forum in addressing issues that transcend national boundaries and cannot be resolved by any single country acting alone. While conflict resolution and peacekeeping continue to be among its most visible efforts, the UN, along with its specialized agencies, is also engaged in a wide array of activities to improve people’s lives around the world—from disaster relief, through education and advancement of women, to peaceful uses of atomic energy.

4. One Health, Ecosystems and Veterinary Sciences

The One Health approach has been criticized for an excessive focus on emerging zoonotic diseases, inadequate incorporation of environmental concepts and expertise, and insufficient incorporation of social science and behavioral aspects of health and governance [26]. Barriers to implementing this strategy include competition over budgets, poor communication, and the need for improved technology [27].

At the national level, it is common to observe Veterinary Medicine, Animal and Veterinary Science, Colleges of Veterinary Medicine, and Veterinary Public Health within the Ministry of Agriculture and not in the Ministry of Health; therefore the link between animal health and human health is very precarious. Veterinary medicine is considered an Agrarian profession which does not include the concerns of Health professionals on most criteria, including resources. Environmental health is under the Ministry of Environment, and overall, this partition of responsibilities results in practical difficulties in terms of implementing the collaboration of multiple disciplines and sectors working locally, nationally, and globally to attain optimal health for people, animals, and the environment.

At the international level, agencies such as The European Centre for Disease Prevention and Control (ECDC), The European Food Safety Authority (EFSA), the forum One Health European Joint Programme (OHEJP), and others, follow the developments on zoonoses with the mission of identifying, assessing and communicating current and emerging threats to human health posed by these diseases, as well as zoonotic agents, antimicrobial resistance, and food-borne outbreaks. However, the monitoring and surveillance schemes of most zoonotic agents are not harmonized between Member States, adding to existing complexity.

Fermented food microbiology is an excellent model that is deeply connected to the dynamics that shape the human microbiota in different body sites. Perceiving microbial community interactions, essential for the threat of global antimicrobial resistance, will help to reveal, via a holistic approach, the unknown secrets of the human microbiome and the interactions which greatly influence multiple forms of human health, nutrition, well-being.

The relevance and potential of fermented foods and beverages, with contrasting and inconclusive results, and advocacy for their inclusion into dietary guidelines, depend on future clinical research. The limitations and inconsistencies in the current body of evidence mean that, presently, no definitive conclusions can be drawn on the potential health benefits of fermented products.

It is not easy to apply trans-inter-multi-disciplinary research required by the One Health approach due to its complexity, but the associated human-animal-environmental microbiota and health threats and risks demand that many challenges and handicaps must be overcome. After two decades, One Health still needs to prove its use and its ability to be applicable in parallel with the present bold reforms which are underway among major United Nations departments in order to more effectively respond to global crises, streamline activities, increase accountability, and ensure effectiveness.