To date, considerable efforts have been devoted to developing a range of CCPs by using rigid carboxylate clusters of paramagnetic transition metals as building units that contain multiple metal ions linked by multiple coordination ligands, especially for producing molecular magnetic arrays [12]. In comparison to other typically employed structural building blocks, polynuclear carboxylate-based clusters offer distinct advantages for engineering CCPs: (i) they can afford specific control over a CCPs’ topology through precise adjusting the coordination environment of metal ions and thus providing the easy accessibility of spacers to a vacant coordination site at the periphery of the cluster, to which a separate cluster can be attached; (ii) ease in managing and fine-tuning their shape and size via increasing or decreasing the nuclearity; (iii) and feasibility to vary their physical properties since their physical characteristics (magnetic, spectroscopic and redox behavior) can be determined and modified prior to network formation [4][5]. Furthermore, the carboxylate ligands can be partially substituted, e.g., by redox-active inorganic ligands such as magnetically functionalized polyoxoanions [13] or paramagnetic organic ligands [14][15][16][17]; thus, the final assemblies can reveal some additional properties and functions such as charge-state switching of magnetic ground states and anisotropy. Such tailor-made multidimensional CCPs can be applied in numerous important fields such as catalysis, gas storage, pharmaceuticals, etc. [18].

Trinuclear oxo-centered carboxylate coordination clusters of general composition [M3(µ3-O)(O2CR)6(L)3]+/0 (where L = a neutral terminal ligand) are the most frequently used building blocks in the construction of CCPs. For assembling 1D oxo-trinuclear Mn/Fe CCPs, several synthetic strategies have been explored, e.g., using simple soluble metal salts or well-known pre-designed “basic carboxylate”, e.g., μ3-oxo trinuclear Mn/Fe carboxylate clusters. The combination of these starting materials with organic ligands, usually in “one-pot” syntheses at temperatures starting from room temperature and up to solvothermal conditions in different solvents, gave the expected CCPs. The first 1D CCP, [Mn3O(ac)7(Hac)]n, which is composed of [Mn3(μ3-O)(ac)6(Hac)] acetate clusters interlinked by acetate bridges, was reported by Hessel and Romers in 1969 [19], whereas Rentschler and Albores synthesized the first 1D CCP composed of [Fe3(μ3-O)(piv)6(H2O)]pivalate clusters interlinked by dicyanamide (dca) bridges in 2008, [Fe3O(piv)6(H2O)(dca)]n (where Hpiv = pivalic acid) [20].

The family of 1D Mn and Fe pivalate or isobutyrate CCPs (Table 1) has been generated by using simple metal carboxylates or employing pre-designed oxo-trinuclear building blocks in reactions [23][24]. Thus, mixing a hot ethanol solution of hexamethylenetetramine (hmta) with MnII isobutyrate in tetrahydrofuran yields the chain coordination polymer {[Mn3O(is)6(hmta)2]·EtOH}n (where His = isobutyric acid) (1) [23]. This CCP comprises neutral mixed-valent μ3-oxo trinuclear [MnIIMnIII2O(is)6] clusters bridged by hmta into a linear 1D chain as shown in Figure 1. To model its magnetic behavior, an approximation considered two trimers coupled through MnIII and MnII ions (the Mn···Mn distances between clusters via hmta linkers are equal to 6.310 Å). For 1, the authors reported significant antiferromagnetic intracluster interactions between Mn spin centers with 2J1 = +32.5 K and 2J2 = −16.8 K, whereas the intercluster interactions through hmta spacers were found to be weakly ferromagnetic.

Combining the different pre-designed μ3-oxo trinuclear pivalate complexes such as [Fe3O(piv)6(H2O)3]piv·2(piv) and [Mn3O(piv)6(hmta)3]·n-PrOH in one-pot reactions with the same spacer (hmta) lead to the formation of heteronuclear Fe/Mn-oxo 1D CCPs [24]. The solvothermal reaction of these precursors in MeCN at 120 °C for 4 h gave a heterometallic chain polymer {[Fe2MnO(piv)6(hmta)2]·0.5(MeCN)}n (2), while refluxing in n-hexane resulted in the solvated heterometallic chain polymer {[Fe2MnO(piv)6(hmta)2]·Hpiv·n-hexane}n (3). Magnetic studies of 2 and 3 indicated dominant antiferromagnetic interactions between the metal centers with significant intercluster interaction through hmta spacer with the following exchange parameters: JMnII–FeIII = −17.4 cm−1 and JFeIII–FeIII = −43.7 cm−1 for 2; and JMnII–FeIII = −23.8 cm−1 and JFeIII–FeIII = −53.4 cm−1 for 3. All intercluster exchange interactions were modeled using a molecular field model approximation to give λmf = −0.219 mol cm−3 (2) and λmf = −0.096 mol cm−3 (3) [24].

The presence of three potential donor metal sites in the oxo-centered trinuclear carboxylate species makes this building block very attractive and useful for the construction of 2D CCPs. The first homometallic 2D {[Fe3O(ac)6(H2O)3][Fe3O(ac)7.5]2·7(H2O)}n cluster-based layer has been prepared by Long and coworkers [35] in 2007 from the reaction of a trinuclear iron acetate, [Fe3O(ac)6(H2O)3]Cl·6H2O, FeCl3·4H2O and sodium acetate in MeCN/water solution at room temperature in 4 months. The main feature of it is the formation of the “star” anionic layer of acetate-bridged [Fe3O(ac)6]+ clusters that contain in its channels cationic guest-trimer [Fe3O(ac)6(H2O)3]+ clusters. In 2009, Pavlishchuk et al. [36] reacted simple salt precursors, namely iron(III) nitrate nonahydrate and manganese(II) nitrate hexahydrate, with formic acid under heating to isolate the first heterometallic 2D CCP {[Fe3O(fa)6][Mn(fa)3(H2O)3]·3.5(Hfa)}n. This compound consists of trinuclear [Fe3O(fa)6]+ units linked by mononuclear [Mn(fa)3(H2O)3]− bridges into 2D honeycomb layers.

By refluxing the presynthesized pivalate complex compounds [Mn3O(piv)6(hmta)3]·n-PrOH and [Fe3O(piv)6(H2O)3]piv·2(Hpiv) in a hot toluene solution for 6 h, the new 2D heterometallic coordination polymer {[Fe2MnO(piv)6(hmta)1.5]·toluene}n (4) can be prepared [24]. In contrast to the above-mentioned 1D CCPs (1–3), in 4 hmta ligands, connect neighboring heterometallic {[Fe2Mn(μ3-O)(piv)6] pivalate clusters into a 2D corrugated layer as shown in Figure 2. The formed framework accommodates guest toluene molecules. In 4, the exchange interactions between MnII and FeIII were found to be antiferromagnetic (JMnII–FeIII = −13.3 cm−1; JFeIII–FeIII = −35.4 cm−1), with significant intercluster interactions through hmta (λmf = –0.051 mol cm−3). A series of 2D heterometallic pivalate CCPs built from [Fe2MO(piv)6] (MII = Co, Ni) clusters bridged by different polydentate polypyridyl-type linkers has also been reported by other groups [31][36][37][38].

In 2014, Baca and Kögerler et al. [25] reported the first 3D cluster-based coordination polymers, {[Fe3O(piv)6(4,4′-bpy)1.5](OH)·0.75(dcm)·8(H2O)}n (5) and [Fe2CoO(piv)6(bpe)0.5(pyz)]n (6). Relative to the 1D and 2D CCPs, 3D structures based on Mn/Fe trinuclear oxo-clusters are rare: up to now, only three compounds were reported [25][39]. CCPs 5 and 6 consist of μ3-oxo-centered cationic homometallic [FeIII3(μ3-O)(piv)6]+ or neutral heterometallic [FeIII2CoII(μ3-O)(piv)6] coordination clusters bridged by different N,N′-donor ligands: 4,4′-bipyridine (4,4′-bpy) in case of 5, and 1,2′-bis(4-pyridyl)ethylene (bpe) and pyrazine (pyz) in case of 6. They were prepared in a “one-pot” solvothermal reaction in dichloromethane from [Fe6O2(OH)2(piv)12] and organic spacers, and, additionally, cobalt(II) pivalate was added in 6. It is worth noting that the mutual arrangement of three-connected [M3(μ3-O)(piv)6] nodes linked by a linear spacer determines the topology of the final CCPs. Here, neighboring μ3-oxo trinuclear clusters are mutually perpendicular, and the pair of clusters may be regarded as a pseudo-tetrahedral four-connected binodal building block, and as a result, 3D porous networks are formed. A 6-fold interpenetrated network with rare (8.3)-c (etc) topology can be observed in 5, and a three-fold interpenetrated network with (10.3)-b (ths) topology in 6 (Figure 3). Magnetic studies of 5 and 6 point to both ferro- and antiferromagnetic intra- and intercluster exchange interactions between the isotropic FeIII and/or the strongly anisotropic (octahedrally coordinated) CoII spin centers. In particular, the χmT value of 7.54 cm3 K mol−1 at 290 K, significantly smaller than the expected spin-only value of 13.1 cm3 K mol−1 for three isolated S = 5/2 centers (giso = 2.0) for 5, indicates dominant antiferromagnetic exchange interactions mediated by the central μ3-O within {Fe3(μ3-O)} unit (J1 = −0.1 cm−1 and J2 = −27.0 cm−1) and the 4,4′-bpy bridges (λmf = −0.609 mol cm−3, the Fe···Fe distances via 4,4′-bpy are equal to 11.347 and 11.380 Å). For 6, both contributions of the orbital momentum of CoII center in {Fe2Co} unit and intracluster (ferromagnetic) and intercluster (ferromagnetic) coupling within {Fe2Co} triangular unit and between them have been considered via the magnetochemical computational framework CONDON [40][41]. The exchange interaction parameters are JCoII–FeIII = +55.0 cm−1, JFeIII–FeIII = −122.0 cm−1 and λmf = +1.163 mol cm−3 (through the pyz ligand the M···M distances are 7.096 and 7.142 Å, and through the bpe spacer these distances equal 13.603 Å). Subsequently, a 3D CCP, {[NH4]2[Fe9O3(ac)23(H2O)]}n, with triangular [Fe3(μ3-O)(ac)6]+ cations and acetate as linkers between the units has been reported by Bu et al. [39]. Its structure exhibits a 4-fold interpenetrating 3D network with a rare eta-c4 net topology. 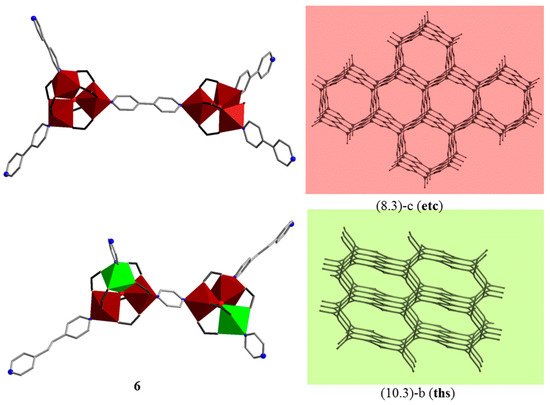