In the simple words of Peter Drucker, efficiency is doing things right while effectiveness is doing the right things. Efficient and Effective Rankings are ranking classifications for Decision-Making Units (DMUs) based on a combination of the efficiency score (obtained by parametric or non-parametric Data Envelopment Analysis frontier estimations) with a multiple effectiveness measure (often obtained using a Multicriteria Decision Analysis).

This study aims at providing a non-compensatory ranking classification combining Conditional Frontier Analysis with the PROMETHEE II methodology for the multidimensional efficiency and effectiveness analysis of Police. The results on Pernambuco (Brazil) Police departments offer interesting perspectives for public administrations concerning prioritizations of units based on the mitigation of resources and strategic objectives.

The sustainable development of a society requires the optimal usage of resources for the provision of goods and services and the ability to reach the desired social goals. Efficiency can be defined as the capacity to avoid wasting materials, resources, efforts, or time to produce a result or outcome. This concept is strictly related to sustainability. On the other hand, effectiveness can be defined as the ability of producing a desired result. This concept is strictly related to quality. In the simple words of Peter Drucker, efficiency is doing things right while effectiveness is doing the right things. These two perspectives are not always walking in the same direction and their potential conflict can jeopardize some of the promising prospects of sustainable service provisions, especially considering public administrations[1].

There is a recurrent trade-off between quality and efficiency in many empirical assessments [2][3][4]. Lo Storto [5], investigating the relationship between efficiency and effectiveness of public expenditure in 108 major Italian municipalities, suggests shreds of evidence for this trade-off involving public service quality indicators (expenditure effectiveness) and DEA measures for cost-efficiencies. Nepomuceno et al. [6], using the Complexity of Needs Model to investigate 88 public and private health service units in Pernambuco, Brazil, also offer support in addition to this discussion. According to the authors, most hospitalization-efficient units are crowded public hospitals working at full capacity most of the year, which can only meet all the demand for hospitalizations (the output in the analysis) by compromising the service's quality.

Ranking Decision-Making Units (DMUs) according to their productive performance has been the objective of Data Envelopment Analysis (DEA) applications in many sectors of economic activities for classifying both efficient and inefficient units[10][11][12]. Ranking service units provide valuable discriminations that support strategic decision-making by creating incentive structures for rewarding efficient managers, teams, resource allocations, recognizing prospective policies and best practices, changing misleading business competencies, operations, and activities, and developing sustainable directions for continuous improvement. It also offers clear information for taxpayers and society on investments' returns regarding public and state companies. Ranking police units under the influence of different environments, subjective value judgments, contexts and exogenous potentials of policing and criminality is challenging in the field of nonparametric efficiency analysis due to the stochastic nature of criminal occurrences.

Ranking service units also requires much effort in defining quality standards for the organization's products and services. Such a prospect is not limited to measuring decision units' technical efficiency with projections for how much outputs can be expanded and inputs contracted toward the industry's production capacity. It also extends to measuring how effective the decision unit is in achieving predefined objectives, which is strictly related to the quality of products and services. Multicriteria Decision Aid (MCDA) methods are a valuable source for systematic ranking multiple alternatives based on decision criteria weighted and evaluated by one or many decision-makers and stakeholders.

Many DEA ranking methods in the Productive and Efficiency Analysis literature are considered post-analysis approaches[12]. The framework illustrated in Figure 1 can be situated in this classification. Four sub-ranks are constructed through pairwise comparisons. Compensations between efficiency and effectiveness are restricted with the imposition of vetoes for clustering effective/ineffective and efficient/inefficient alternatives (municipalities). The municipality is top-ranked when it is sufficiently effective according to the predefined objective and efficient in using the available resources to produce clear-ups for the specified felonies and misdemeanors. The second sub-rank has effective but not efficient municipalities, i.e., excellent efficiency prospects cannot offset poor effectiveness. If the municipality is efficient in using the available resources to solve crimes but is not effective in reaching the specified institutional goal, it is located in the third sub-rank with similar municipalities. The last sub-rank has both ineffective and inefficient units. The PROMETHEE II net flow coefficient outranks the units in each sub-rank of this framework. 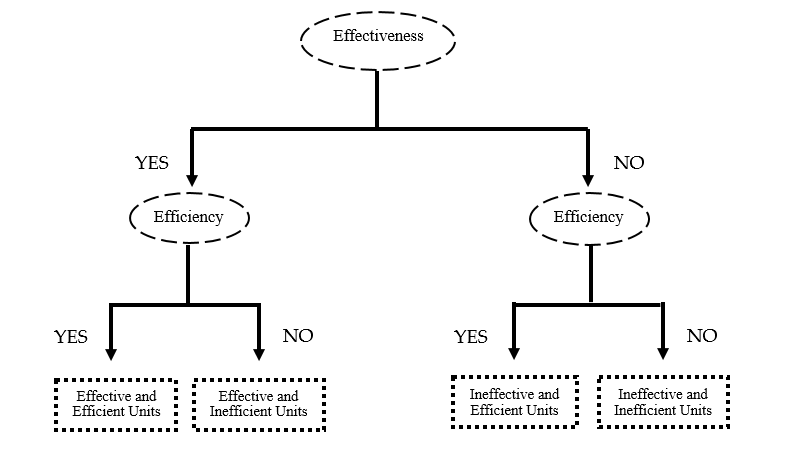 Data regarding the number of police officers (input) and inquiries with the definition of responsibility (clear-ups) for three types of felonies (output), and the corresponding occurrences (Violent Crime, Street Mugging and Carjack) in 145 of the 185 Pernambuco cities were provided by the Secretariat for Social Defence (SDS-PE) [13]. The criminal occurrences are the environmental factors conditioning the directional efficiency of the police departments. Adequacy of this data can find support in similar assessments of police efficiency [14]. Table 1 and Figure 1 summarize the main descriptive data information.

The following tables report the overall Policing Effectiveness-Efficiency application for a non-compensatory ranking of 145 Pernambuco's municipalities described in the methodology. According to the results, none of the three completely efficient units (i.e., efficient in all three output models) are ineffective. For this reason, we have 3 sub-rankings instead of 4, as illustrated in Figure 1. The tables provide information on the non-compensatory compared to the compensatory ranking position, i.e., when the municipalities are all outranked in the same group without the imposition of effectiveness or efficiency vetoes. The Net Flow parameter is used to outranking the units in each sub-rank.

The effectiveness is measured in how much the municipality has reached the target of 12% reduction in homicides (so more is preferable, but 0.12 is sufficient). The last column for the relative inefficiency aggregates each unit's relative inefficiency scores for all the three models considering the slacks (so less is preferable and zero means the unit is efficient in all three models, with no slack for police officers). It is interesting how different the non-compensatory top-ranked municipalities would feature in a compensatory evaluation. Jucati, the first top-ranked municipality, is a small city in the agreste pernambucano (rural / wasteland region) of about 11 thousand residents and a population density of 87.92 per km². It had 4 officers as input along the year, 4 homicide occurrences (all solved), 12 street mugging (10 solved) and 15 carjackings (8 recovered). The municipality reduced from 9 homicides in 2015 to 6 homicides in 2016 (about 33% reduction) and from 6 homicides in 2016 to 4 homicides in 2017 (about 33% reduction).

When compared to the first effective but not efficient unit (Cumaru, Table 2) we can observe the compensation effect: because Cumaru, another small city in Pernambuco, could reduce the homicides entirely in the year of evaluation (from 2 to zero, 100% effectiveness, w = 0,5208333) this more than compensates a poor efficiency performance (25% relative inefficiency), locating this municipality in the second position in the Compensatory Ranking, and Jucati in the 18º. Compensations of this nature can be observed all over the rankings. Non-compensatory / Compensatory ranking inversions are even bigger for Saloá (2 compared to 37) and Camocim de São Félix (3 compared to 69). The Non-compensatory ranking of units in this assessment tends to provide a fairer evaluation in line with what is expected by the policymaker.