The subject of this entry is on the regard of one of the order statistics: the Anderson-Darling statistic.

We provided a method of calculation for the probability associated with the Cumulative Density Function (CDF) of the Anderson-Darling statistic. 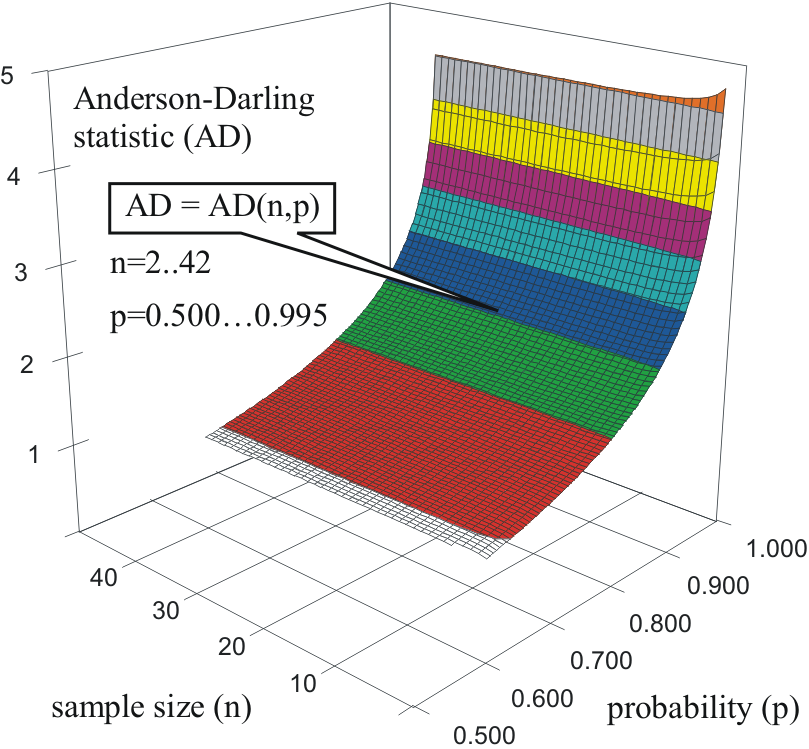 A commonly known fact among all order statistics is that is very difficult to extract the probability associated with the statistic for a simple fact: their CDF (cumulative density function) - depicted in the figure for a range of probabilities from 0.500 to 0.995 (with a step of 0.5%) and for a range of sample sizes from n = 2 to n = 42 - have no analytical expression (e.g. we do not possess a mathematical function which to express it analytically). Unfortunately, the same case applies for their PDF (probability density function) making unavailable also the numeric integration methods. The only way of associating the probability (e.g., α = 1 - p) with the statistic is from Monte-Carlo experiments, and this is the way in which all were reported (see [1], [2], [3] and [4] for instance) and are on the use today.

Unfortunately, it is an inconvenience to use the raw data from Monte-Carlo simulations, namely we may have access to certain thresholds (for instance the value of the statistic corresponding to α = 5%), but it is not possible to extract the probability associated with a particular value of the statistic (for a simple reason: it is not tabulated). For some instances, when the statistic it is in range of tabulated data, the interpolation may provide satisfactory results - but also here precautions should be taken because the probability does not vary linearly with the statistic.

where AD is the calculated Anderson-Darling statistic on the sample of size n:

is the ordered (ascending) probability measuring that i-th (ordered) observation to belong to a certain distribution.

The values for the

coefficients are given in the following table.

The AD statistic (as any other order statistic) can be used to test (to measure the agreement) any distribution, not only the well-known normal (Gauss) one.

The use of AD statistic requires an estimate of the parameters of the distribution being tested. Certain precautions should be made, namely if the estimation of (some of) the parameters are not made with Maximum Likelihood Estimation method (see [6]; the usually alternative being the Central Moments method, see [7]), then a corresponding number must be subtracted from sample size value before to extract the probability associated with the statistic.